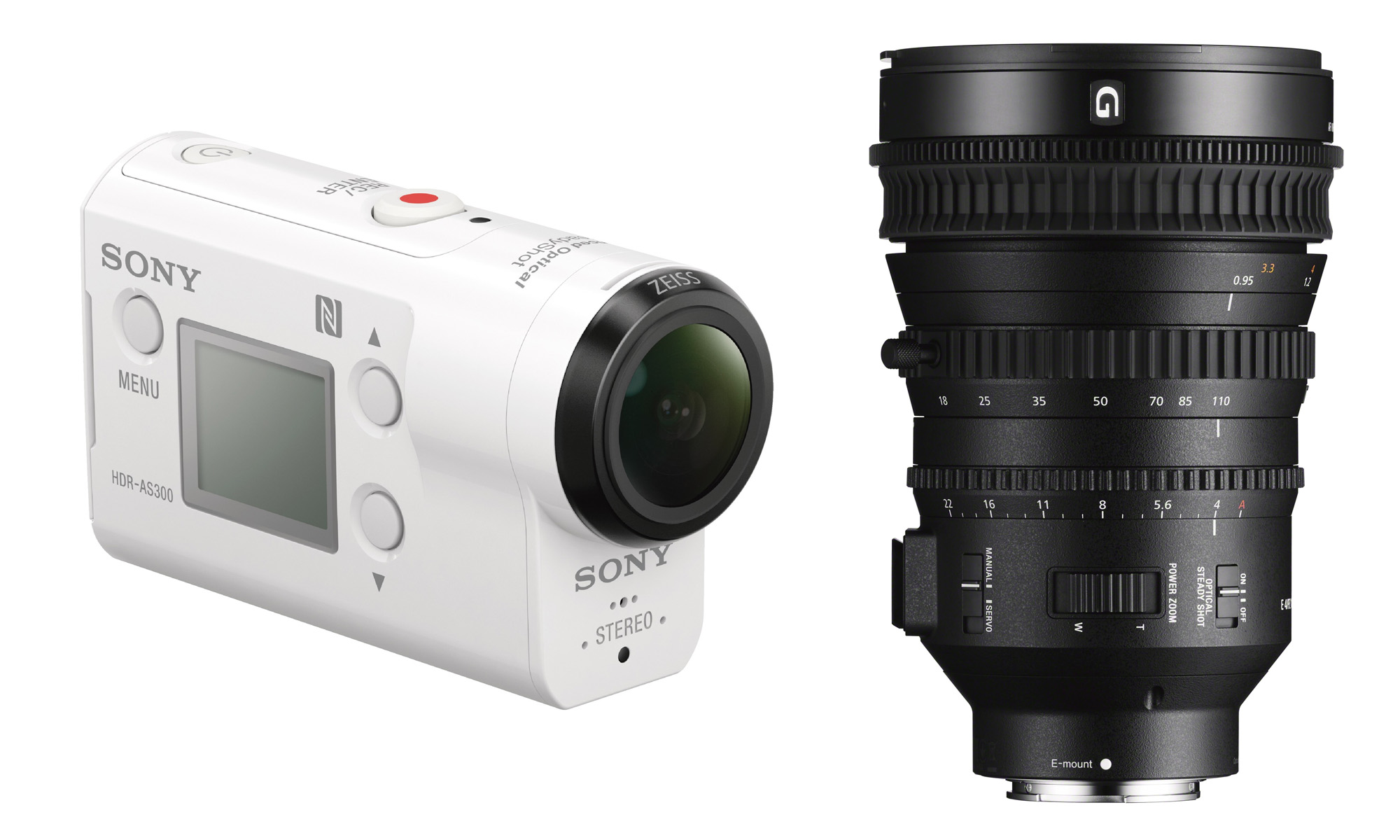 Today, Sony has announced 2 new action cams, and an 18-110mm Super 35 zoom lens for video. The action cams, named FDR-X3000R and HDR-AS300R will be the new flagships of Sony’s POV camera line, with the X3000 sporting 4K video capture and the AS300 shooting full HD. The key feature of both cameras will be optical image stabilization. The lens, the E PZ 18-110mm F4 G OSS features optical SteadyShot™ in-lens image stabilization, a 6.1x zoom ratio, an f/4 maximum aperture and dust and moisture resistance. 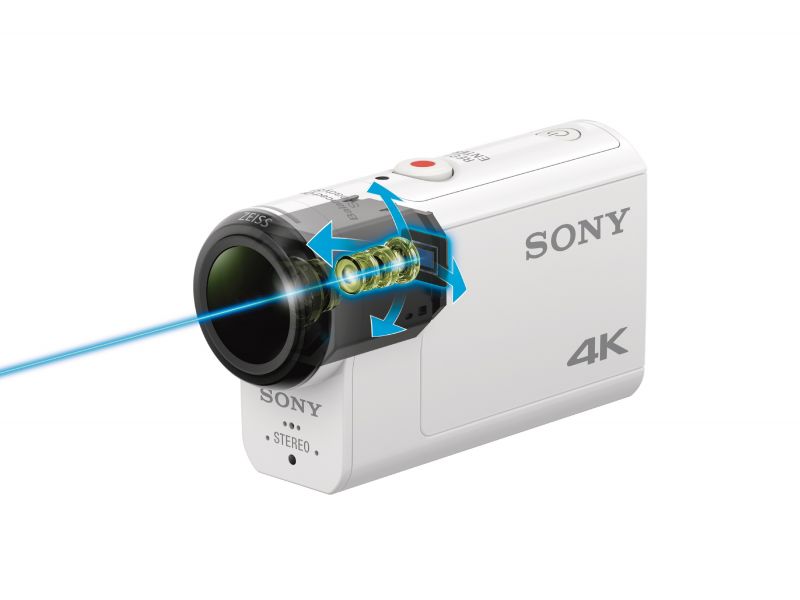 The Highlight feature of these new action cameras is their in-body “Balanced Optical SteadyShot™.” With this new technology, the lens and sensor move together to compensate for camera shake. This will be the first action cam from a major manufacturer to feature image stabilization, which seems like a fitting capability for this market. They’ll also be equipped with a new Zeiss Tessar lens with “significantly less lens distortion” than their precursors and a new back-illuminated 1/2.5 type (7.2mm) CMOS sensor.

Both the 4K and HD versions feature full pixel readout for high resolution footage in several formats, including Sony’s XAVC-S codec at 100Mbps at 4k and 50Mbps in full HD. The FDR-X3000R is capable of shooting 120fps at 1080p, and the HDR-AS300R can shoot 120fps at 720p. As expected with cameras in this category, the new cams are water and dust resistant, and come with an underwater housing certified to 197ft/60m. 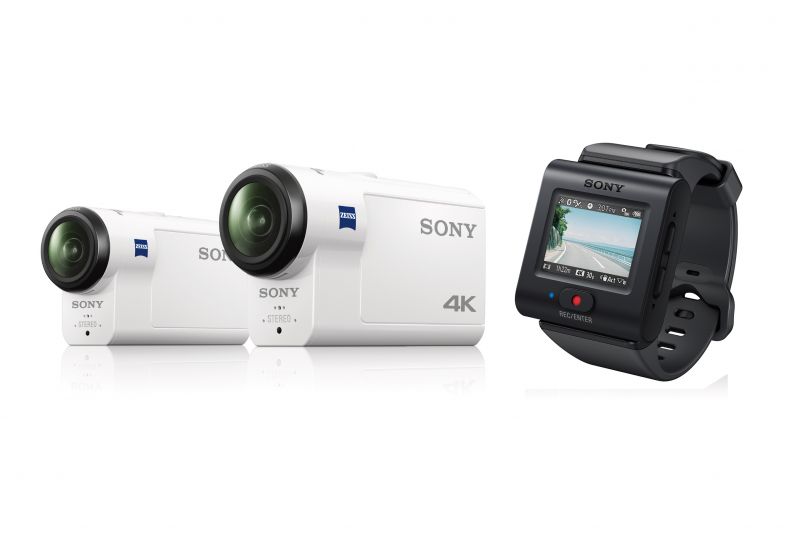 Also available for both of these cameras will be a new Live-View Remote, listed as being 30% smaller than the previous version. The wifi in the cameras also allows use of Sony’s PlayMemories Mobile™ app to change settings and control the cameras using a smartphone or tablet. 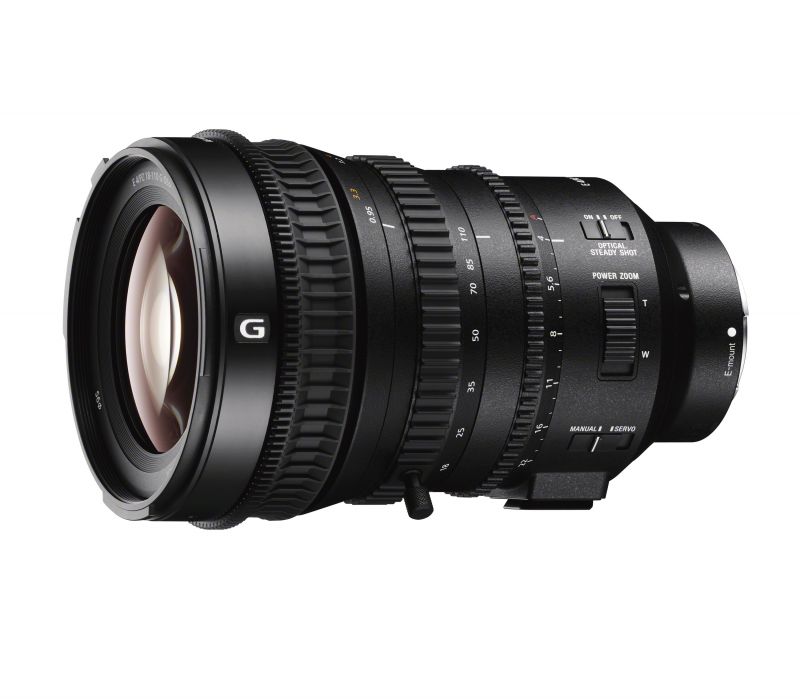 This new Super 35 / APS-C E mount lens is designed with high resolution, professional 4K cameras in mind, including the FS5 or FS7, a6300 or A7 series cameras (in APS-C mode). It features Optical SteadyShot™ image stabilization, and Smooth Motion Optics (SMO) to minimize focus breathing and make the lens parfocal, both essential for any serious video focused zoom lens.

The 18-110mm zoom range delivers a 35mm equivalent of 27-165mm, or a 6.1x magnification ratio. Its focus, iris and zoom rings are geared for easy use with common accessories, and it can be zoomed in either manual or powered mode. On the technical side, it will feature 18 elements in 15 groups, and a 7 rounded-blade aperture, and will weigh in at 1105g (39oz).

The lens will be available in North America in November for $3,500.