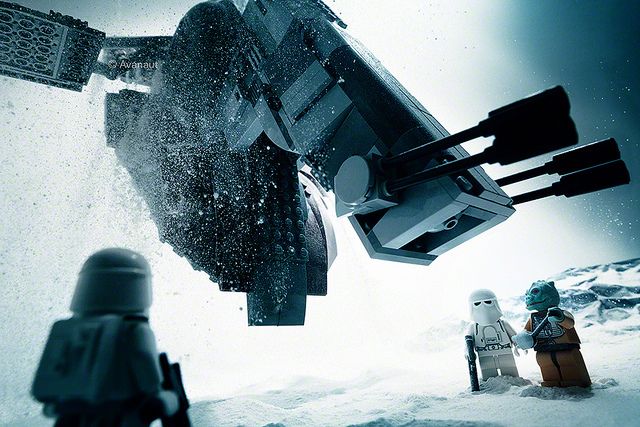 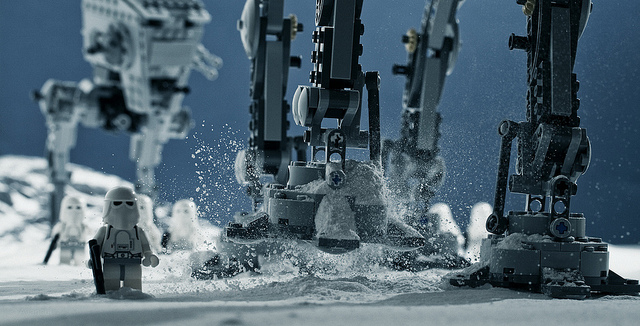 Finnish photographer, Vesa Lehtimäki (known as Avanaut), has combined his love for photography, LEGOs and movies, to create extremely detailed photographs of scenes from Star Wars and Lord of the Rings. Using LEGO Minifigs, Avanaut creates make believe scenes complete with mini stories about what he imagines happens in the daily lives of the Imperial and Rebel forces.

Two of the great moments of my childhood were the first two original Star Wars movies,” Avanaut tells Wired. “As a kid I wanted to become a movie director. I made some Super 8 movies but it did not work out that well. With my photography, I’m revisiting an unfulfilled career path, I guess. With the attached little stories my photos are like tiny one-frame movie scenes. And I get to direct Star Wars!

What began as a hobby and a creative outlet, Avanaut started making dioramas of his son’s toys, taking photos of them and then uploading them onto Flickr. He then went on to create, the imaginary world, Hoth, with the most popular image,  “The Inconvenient Flaw of the Y-Wing,” shown below:

With ground plaster of Paris and gypsum powder for snow and shooting underwater to slow down the particles, Avanaut uses a Canon EF 100mm f/2.8L Macro IS USM to capture the amazing sharp, detailed images of his movie fantasy worlds. Avanaut complied his Star War’s images in a Blurb book, of which he made only three copies, one for his son, the owner of the toys. He has no plans to publish more. He also has a sets featuring scenes from “Lord of the Rings” and “Indiana Jones.”

Check out the amazing images from ‘Hoth,’ ‘Tatooine’ and ‘Middle Earth’ below. To see more of Avanaut’s work, check out his Flickr page.

CREDITS : Photographs by Avanaut have been used with permission for SLR Lounge. Do not copy, modify or re-post this article or images without express permission from SLR Lounge and the artist.
[via @Wired]
Tags #star wars #lego #Minifigs #LOTR
Previous