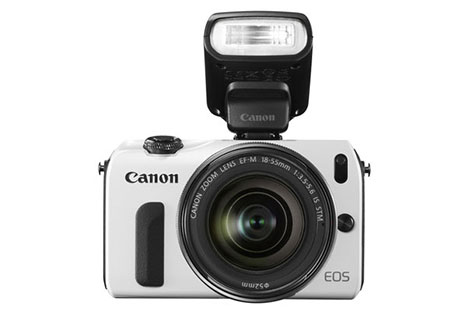 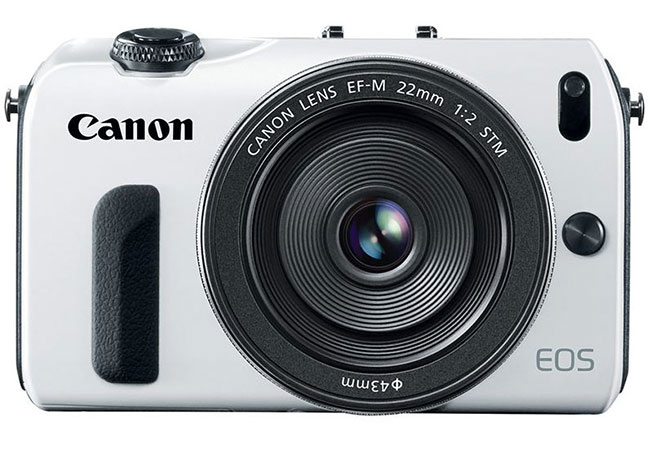 Well, here it is everyone. Just as expected, Canon officially unveiled their first ever foray in to the mirrorless camera with their 18 MP Canon EOS M Mirrorless Camera. It is designed to target novices and enthusiasts who wants to dSLR performance in a compact-camera body without the complexity of a dSLR. The Canon mirrorless is expected to be released in October. The price with the EF-M 22mm f/2 STM kit lens bundle will be $799. Check out these two videos, courtesy of Digital Camera World and Tech Radar.

The EOS-M shares a lot of commonalities with the Canon Rebel T4i dSLR:

The last one is important because it should the Hybrid CMOS AF not only allows auto-focus in video mode, but it should help the traditional Canon dSLR phase-detect lenses to focus faster.

The camera will be coming in three colors – Black, white, and Red. 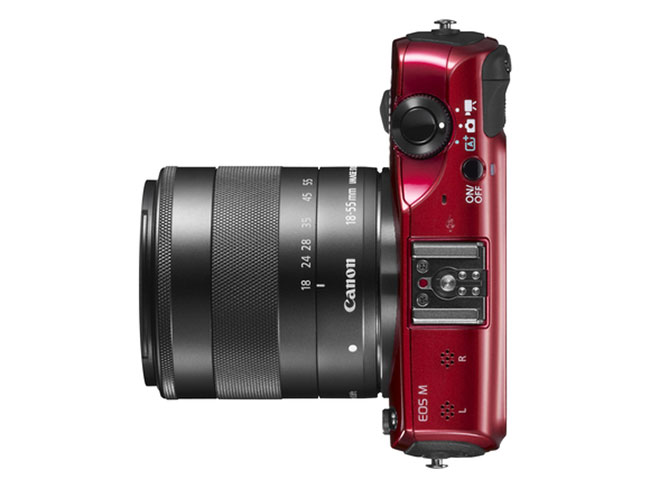 Overall design reflects that of a compact-camera, with clean simple lines and minimal design elements. On the front side, we see a release shutter button at the 3 0′ clock position and a vertical window that houses the IR remote receiver and AF illuminator. 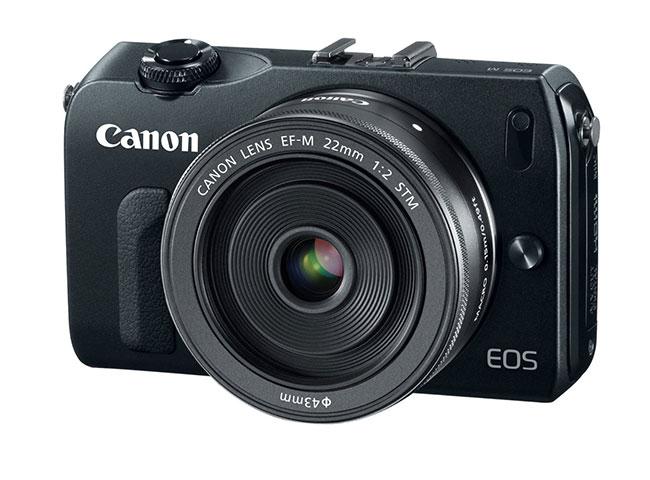 On the back side, by the thumb-grip, there is the movie record button. Below it, there are the menu and playback buttons, and below that is a four-way cluster with the SET button in the center and the dial ring around it. The SET button in the middle also brings up a Quick Menu. During shooting, the delete key can be programmed for either AF to center, Depth-of-field preview, ISO, Flash exposure compensation, or LCD brightness.
As expected, the camera operation will be more touchscreen-menu driven. There is full manual support, however, through this touchscreen. It is at least capacitive, making it easier to use compared to resistive touchscreen, and also allows multi-finger gestures such as pinch-to-zoom. Access to Av, Tv, P, and M modes are also done on the touchscreen. 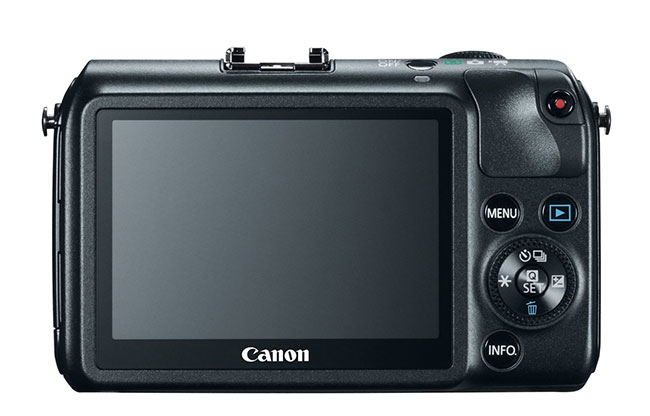 Over to the top of the camera, you can see that there is no built-in-flash. Instead, there is a stereo microphone, followed by a hot shoe, a power button, and a shutter button surrounded by a Mode collar. This collar allows you to switch between Intelligent Auto, Camera, and Video. 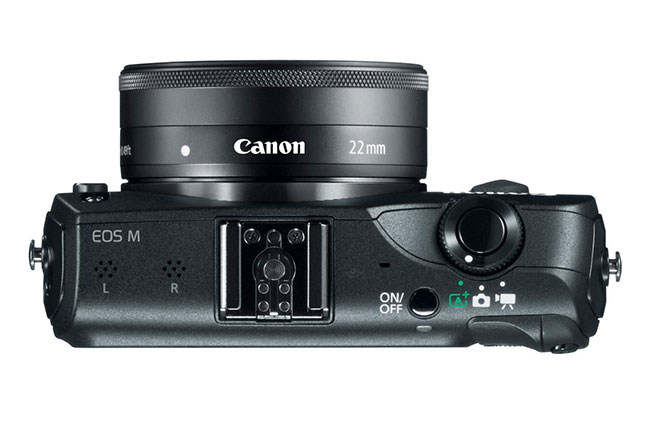 One thing to note, the camera strap connector is non-standard. It is made so that the camera can hang and rotate freely, so that if heavier lenses are used, the camera will hang with the lenses pointing down.

The EF-M lens mount and lenses

The mirrorless format allows the lenses to be mounted closer to the sensor. The flange distance, which is the distance from the rear lens element to the sensor, is only 18mm. It uses an electronic first curtain shutter and a mechanical second curtain shutter, which helps with shutter sound and lag. Surprisingly, however, the shutter FPS is only 4.3fps.

Both of the new lenses, the Canon EF-M 18-55mm f/3.5-5.6 IS STM lens and Canon EF-M 22mm f/2 STM lens utilizes the STM motor, which allows for smooth and silent focusing when paired with Hybrid CMOS AF, as well as autofocusing during video recording. According to DPReview, the 18-55mm is about the same size as Sony’s E 18-55mm F3.5-5.6 lens for the NEX system, and the 22mm is about the same size as Panasonic’s 20mm f/1.7 pancake lens for the mu4/3 system. The 18-55mm has a full frame equivalent of 29-88mm, while the 22mm equals to 35mm. The zoom kit lens also has the added benefit of IS, and according to DPReview, it has the faster focus speed performance between the two. 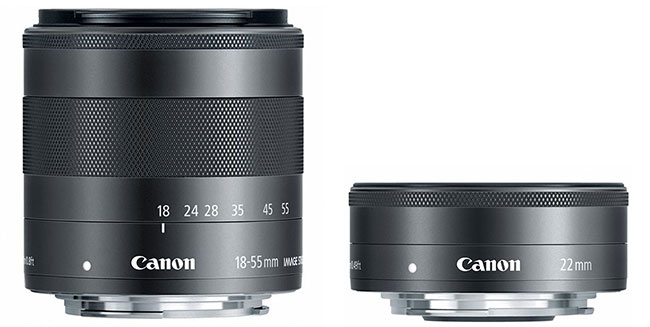 There will be a Canon EF-EOS M Mount adapter that will be available at the time of release. The adapter itself does have a built-in tripod mount, at least, so you won’t have to worry about damaging the EOS M’s mount. 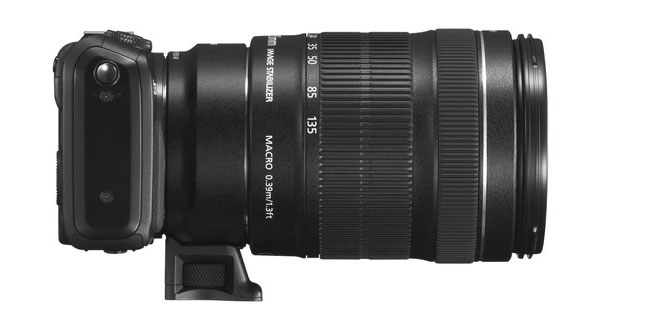 You can certainly attach any of the Canon EF and EF-S lenses on the EOS M, but small size of the camera and the lack of a good grip means that you end up looking very unbalanced like this: 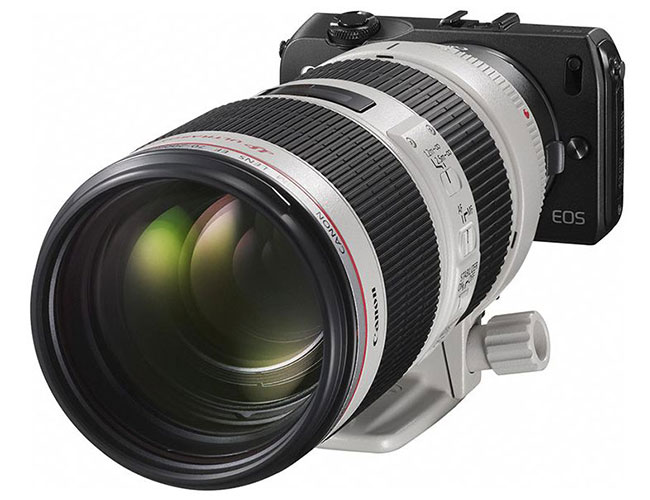 The EOS M kit will also include the Canon Speedlite 90EX Flash. It has a guide number of 9m at ISO100, covers an angle of 18mm (28mm full frame equivalent), and runs off 2 AAA batteries. It is also a wireless commander for the other Canon speedlites. 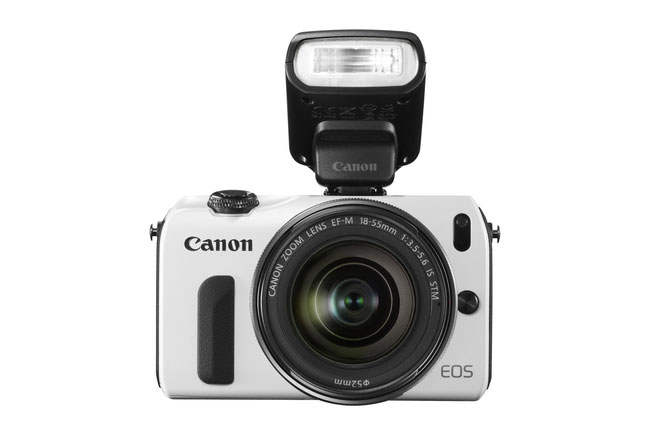 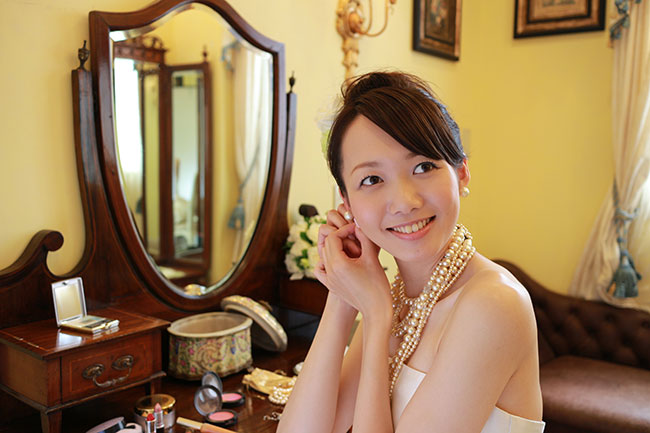 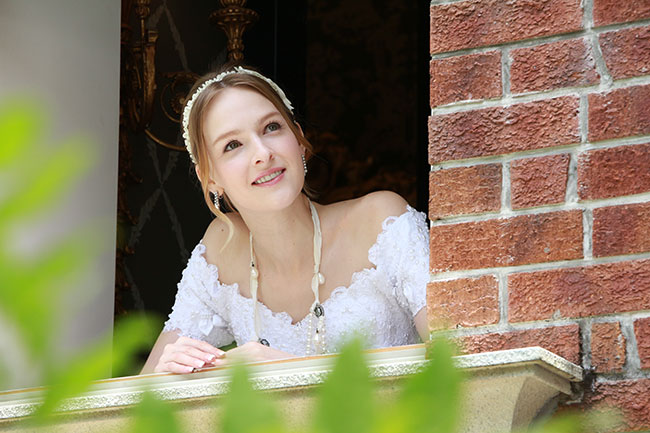 This new addition to the EOS family offers a great solution to videographers and photographers of all levels, with two new lenses designed specifically for Canon’s new camera format – the EF-M 22mm f/2 STM kit lens and the optional EF-M 18-55mm f/3.5-5.6 IS STM lens– and the ability to use the full line of Canon EF and EF-S lenses through the optional Mount Adapter EF-EOS M.

An Advanced Video Capture Device
The EOS M utilizes Canon’s Hybrid CMOS AF system to deliver fast autofocus speed for both video and photos. The Hybrid CMOS AF system truly shines when shooting video with EOS Full HD Movie mode including Movie Servo AF for continuous autofocus and tracking of moving subjects. The Hybrid CMOS AF system is located on the CMOS sensor itself and combines phase-difference AF and contrast AF to achieve operational stability, speed and precision. The Movie Servo AF function on the EOS M is enabled by default which keeps images on the rear screen in constant focus, even before the shutter is pressed. This continual focus makes for sharp video capture in a snap or to help reduce shutter lag due to focusing when still images want to be shot. The camera employs three AF methods for video and photos, Face Detection & Tracking AF, Multi-Point AF for automatics selection and Single-Point AF, where users select one of 31 AF points. Through the camera’s touch-panel operation, subject recognition and tracking is engaged at the touch of a finger, allowing users to track subjects accurately and focus on intended subjects with ease. In addition to subject tracking, the touch-panel LCD allows for simple, intuitive operation, menu navigation and touch features making it easy to shoot video and photos.

Thanks to Canon’s new Stepping Motor (STM) technology, when using either of the newly announced M-series lenses – the EF-M 22mm f/2 STM kit lens or the optional EF-M 18-55mm f/3.5-5.6 IS STM lens – the AF system remains silent, helping ensure users only capture the sound of the scene being recorded. The EOS M also features manual audio level control to 64 levels, a built-in stereo microphone, which includes a wind filter and an attenuator function to reduce audio distortion in extra loud situations. The EOS M records MPEG-4 AVC H.264 video as an .MOV file in a range of NTSC and PAL professional frame rates, including 1080p Full HD video at 30p (29.97), 24p (23.976) and 25p, 720p HD video at 60p (59.94) or 50p and Standard Definition video at 30p (29.97) or 25p.

In addition to the creativity afforded by over 70 compatible lenses, the EOS M also includes Picture Style settings – including custom Picture Styles – when shooting video, allowing users to adjust color settings the same as when shooting still images. The camera also includes Canon’s Video Snapshot mode for an easy way to record and create a fun highlight reel that can be easily shared. Video Snapshot mode combines a series of short video clips into a single file, all in-camera. Through the camera’s touch-screen controls users can delete, cut or re-order the clips in-camera for quick and easy editing.

The EF-M 22mm f/2 STM kit lens is ideal for shooting video and still images. The fixed focal length lens has a great capacity for gathering light with an incredible aperture of f/2 and when combined with the camera’s APS-C image sensor, provide beautiful bright images and background blur for both video and stills. For more focal range versatility, Canon is also introducing the new EF-M 18-55mm f/3.5-5.6 IS STM, which provides videographers and photographers with a variable zoom range for general use with video recording or photographing. Both lenses are designed specifically for use with the EOS M digital camera.

In addition to the two lenses, any of Canon’s EF and EF-S lenses can be used with the EOS M with the optional Mount Adapter EF-EOS M. The EOS M camera’s strong magnesium and stainless steel frame provide the durability and rigidity to support the full line of EF and EF-S Lenses in a lightweight convenient design. Using the adapter allows the camera to be fully integrated into the EOS ecosystem of lenses, adding creative options and versatility to this powerful camera.

Ideal for use with the EOS M, Canon is also announcing a new compact and lightweight flash unit, the Speedlite 90EX, designed for the photographer on the go. The Speedlite 90EX is capable of coverage for 24mm wide angle lenses (35mm equivalent) with maximum guide numbers of 30 feet (9 meters) at ISO 100. The flash unit can be controlled wirelessly for creative multiple flash shoots and uses the standard Canon EOS hot shoe mount for compatibility with all EOS DSLR cameras and PowerShot digital cameras that include a hot shoe.

Other sites to read more on the Canon EOS-M

To see how the Canon EOS-M performs, check out Tech Radar’s Hands on Review

Image and video samples from Canon

Another photo gallery by Canon

Phase Detect AF: How Accurate is it Really?