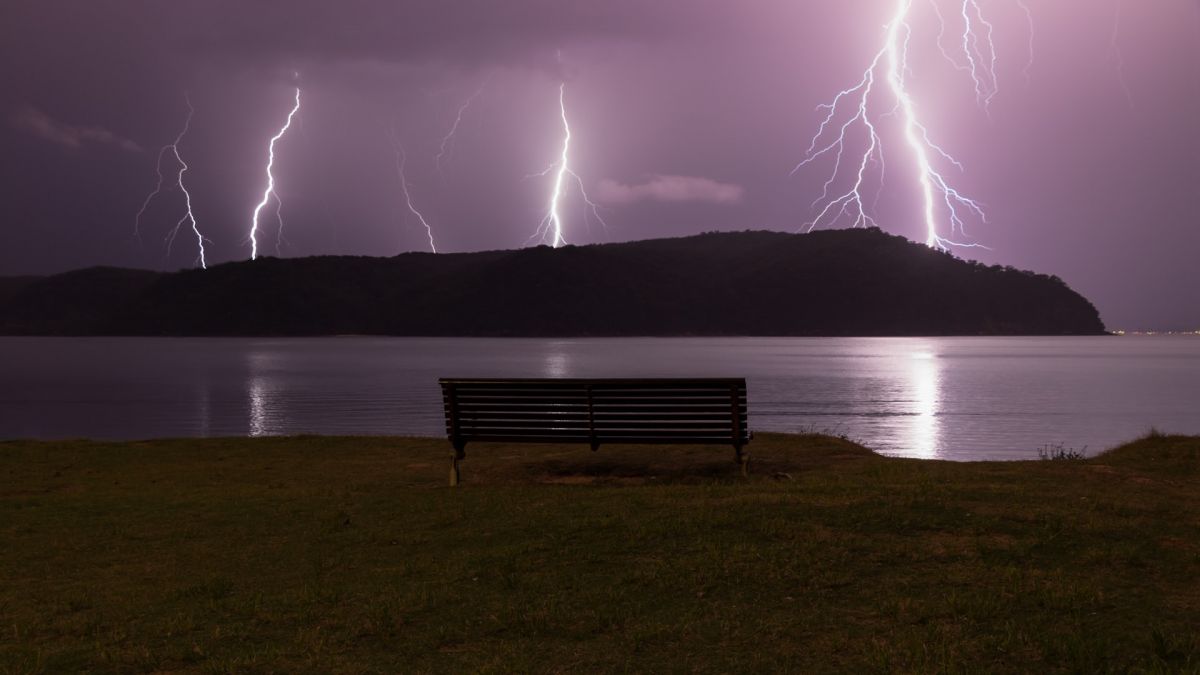 Trying to photograph lightning can be a challenge, but the images you get will be very rewarding. No two lightning patterns are ever exactly the same, so you’ll always have unique images. If you’re not sure where to get started with lightning photography, we’ve put together this guide to help you along. We’ll look at the gear you’ll need, camera settings, composition, and how to stay safe while capturing those amazing lightning images.

The article will cover the following aspects of lighting photography:

There are a few items that will help you capture the best lightning shots. The good news is that as a photographer, you probably already have them. 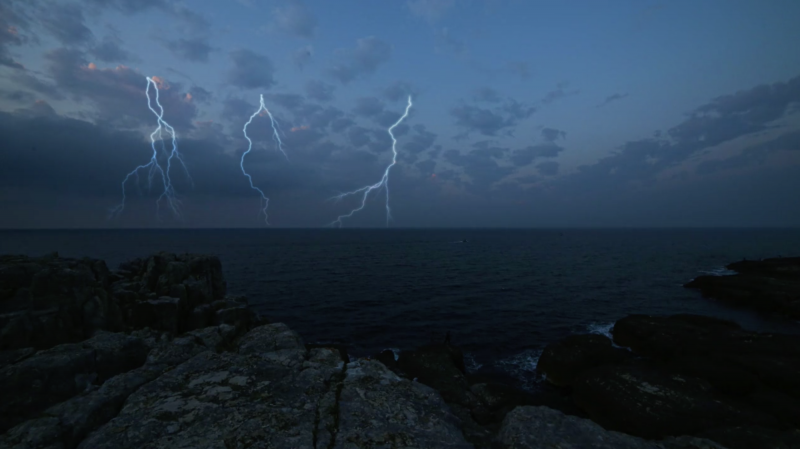 A stitched together photo, combining three frames into a single image, as seen in the MIOPS FLEX Kickstarter Video

That’s really all the equipment you need to shoot lightning. However, if you are seriously into lightning photography then you may want to buy some specialized gear, like a lightning camera trigger. This takes a lot of guesswork out of shooting, because this trigger sends a signal to your camera the instant a lightning bolt begins, and it automatically takes photos of it.

Lightning is beautiful, but don’t forget how deadly it can be. If you can, it’s best to be inside a building or car so that you are protected from being struck. It’s really not wise to photograph lightning in an open space, especially if there are trees, water, or tall structures nearby. Don’t be fooled by how far away the lightning looks – if you can see it, it’s close enough to strike you. 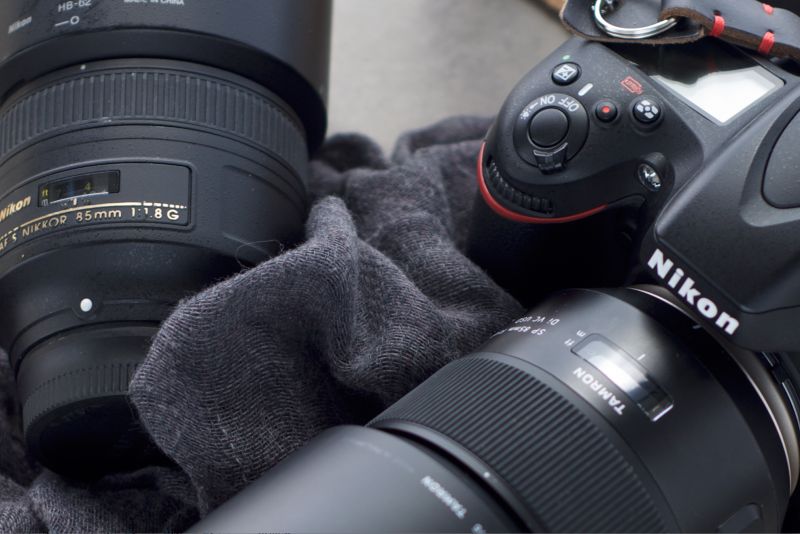 When you get to your chosen location, set your camera up on the tripod and set your lens to manual focus. Focus to the distant horizon (infinity), and check it’s sharp by taking a test shot and checking it. Manual focus is best for shooting lightning because if it’s too dark the AF system can have trouble focusing.

The settings below are just a rough guide, but you can use them as a starting point and adjust as necessary..

Set your camera to manual mode (usually ‘M’) on your mode dial. Auto modes tend to give the wrong exposure when it comes to lighting photography.

Set the ISO to the lowest value your camera has. You should only raise your ISO to capture very faint, distant lightning strikes as part of a much darker, starry nightscape image.

Setting the shutter speed for a longer time gives a better chance of getting the lightning. Try and set it for between 5 and 30 seconds to start with. This will brighten up the ambient exposure, of course, but as long as you capture lightning during the exposure, your shutter speed will not actually affect the brightness of a single strike, just like how a strobe flash works!

If you’re looking for a dramatic, dark foreground shot, or if lightning is striking so frequently that your exposures are getting blown out, then you might want to try a shorter shutter speed of around 1-3 seconds, and just capture back-to-back exposures!

A medium aperture of f/4 or /5.6 is a good starting point, if there’s nothing in the foreground of your composition. You may find your images look overexposed at this setting, so try at f/8 instead, or adjust your shutter speed to be faster, if you’re trying to catch faint lightning strikes that might “disappear” as you stop down your aperture.

If there’s a foreground subject in your composition, then you may want to use a small aperture (bigger f/stop) to get more depth-of-field. If you find yourself needing to use f/11 or f/16 to achieve good depth of field in your scene, you might have to raise your ISO a little bit in order to catch those faint lightning strikes. 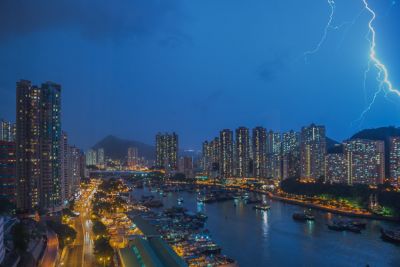 This may be easier for those who live where there are lots of storms! However, it’s not just about capturing lightning bolts in any old scene – the trick is to find an interesting foreground.

This means you may well have to plan ahead. It’s dangerous and pointless to wait until you’re in a storm to find good backdrops for your lightning photographs. Think of some places local to you that you could get to quickly when a storm is brewing, and preferably, shoot safely during the storm. Lightning shots look best when there’s a lot of sky, but also some details in the foreground, such as buildings or hills.

TIP: Here’s how you can tell how far away lightning is from your current location: count the seconds between the flash of light and the boom of the thunder Every five seconds equals one mile. So, if you count ten seconds, you are a lot safer, but if you count just one or two seconds, you could be in extreme danger!

We recommend finding somewhere indoors, for maximum safety if you know a storm is going to pass right over you. If you’re outdoors and a storm is heading towards you, you need to leave the area, of course!

5: How to Photograph Lightning at Night 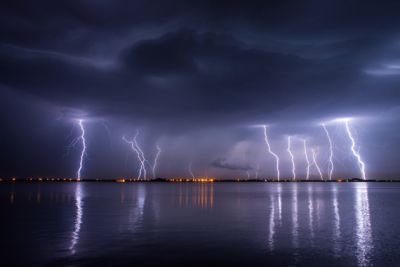 Shooting lighting at night gives you some really dramatic images,  but there’s no one-size-fits-all solution to the settings you should use. There’s a lot of variables to consider that may make a difference to the settings you use. Once you have set up your camera and manually focused to infinity, ask yourself these questions:

Take some test shots with lightning in the exposure, and check to see that you’re happy with the focus and settings you’ve chosen. If not, adjust the focus, shutter speed, or ISO accordingly.

6: How to Photograph Lightning During the Day 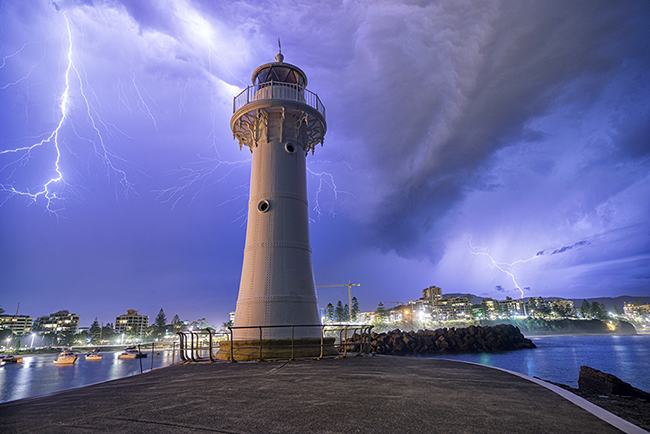 Shooting successful lightning photos requires a slightly different composition than you may be used to. For instance, you need to cover more sky than your foreground or background. This might not look right at first, but once the lightning strikes it will become the main focal point of the image.

Because lightning appears in different places, you never know where it’s going to show up in your photo. This is why it pays to use a wider-angle lens than usual so that you can crop to a good composition later if you need to.

Alternately, if you’re feeling really ambitious, and if you have an old beginner SLR lying around, consider setting up two cameras and finding two different compositions of two different parts of the sky!

Patience is a virtue when it comes to photographing lightning!  It’s unpredictable, and you’ll find that you take many, many shots without getting anything good. You may also find that your just have to LEAVE an area, for your own safety, especially if a storm is approaching, and not moving away from your position.

[REMEMBER: For every five seconds between the lightning flash and the thunder’s boom, that is only ONE mile between you and the strike. That’s only ~5,000 feet away! Now might be a good time to also remind you that a lightning strike is around 300 million volts and 30,000 Amps. For reference, just a fraction of one Amp, or just 50-100 Volts, can be lethal, depending on the combination of the two. Feeling a little more cautious now? Good.]

Eventually, everything will come together just right and you’ll feel a huge sense of satisfaction at having safely captured the perfect lightning shot!

Hopefully, our tips have given you a bit more understanding of how to photograph lightning. We also hope they inspire you to get out there and have a go. Have fun, and don’t forget to stay safe while shooting!

Tips for Corporate Headshots and Portraits Dawn is a commercial and landscape photographer with a passion for writing. She lives in Durham City, in north-east England, and you can see some of her work here.