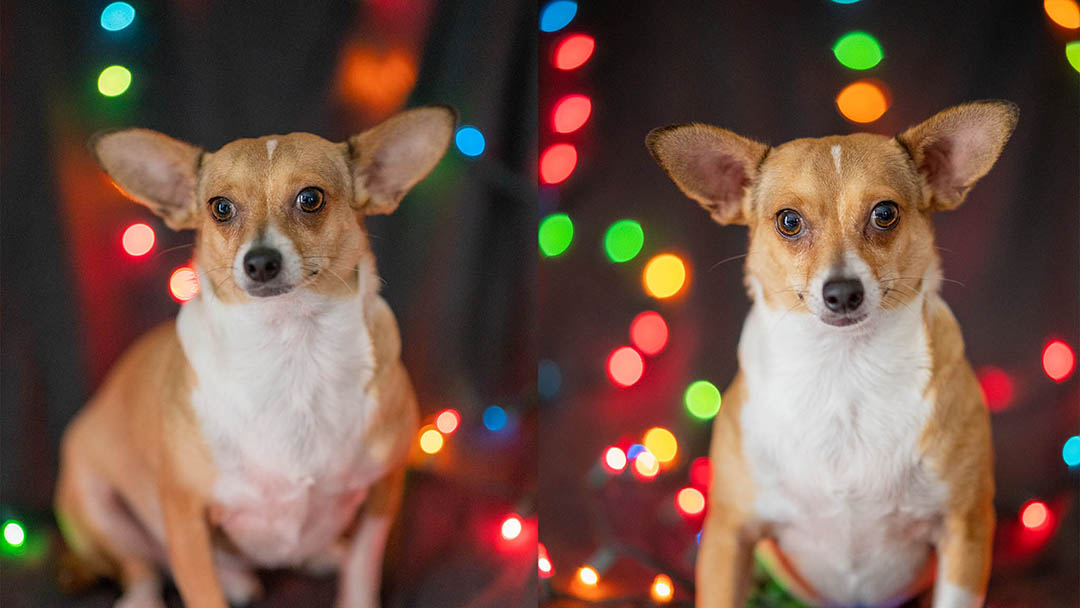 One of my favorite things to do with Christmas lights is, you guessed it–make bokeh dots! Indeed, one of the reasons we invest in a full-frame camera and a nice 85mm prime is, of course, beautiful bokeh.

Since there are two new third-party 85mm f/1.4 lenses for full-frame mirrorless systems this year, we thought we’d do a quick comparison to show you how the bokeh compares, and particularly, the look of “bokeh dots” 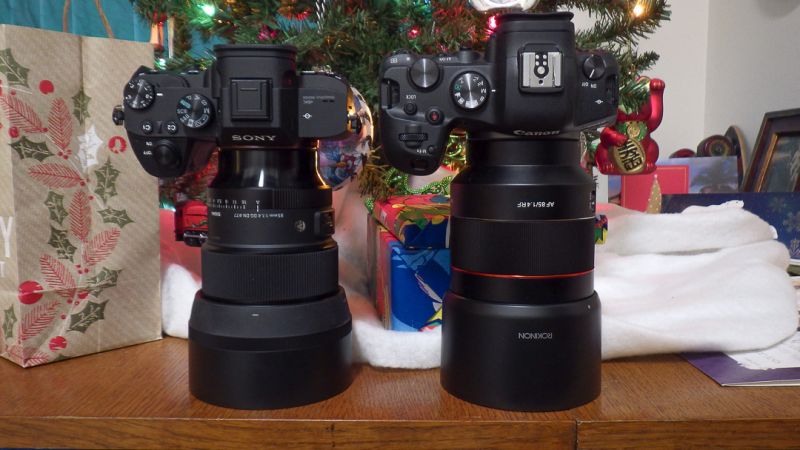 The Sigma is an all-new optical design, and is lighter and smaller than its (let’s be honest, utterly massive) DSLR sibling, which has received rave reviews over the years. (This new mirrorless version looks downright TINY for an f/1.4 portrait prime!)

The Rokinon (Samyang) is, apparently, the same design as the existing Roki-Yang 85mm f/1.4 which has been available for the Sony E-mount for a while now, and has also received rave reviews.

Of course, dogs never sit perfectly still while you change lenses, so we had some difficulty in getting a truly precise comparison. In short, when actually using these lenses in the real world, we had a lot of fun with both lenses, and got a lot of cute pics! (Hopefully, that’s what you’ll be doing as soon as you’re done reading this article… Get off your computer and go take pictures!)

To be scientific about it, we locked things down on a tripod and created a more fixed, ceteris-paribus test:

Right off the bat, we do see that the size of the bokeh dots is essentially identical at f/1.4. The Rokinon/Samyang might appear to have slightly larger bokeh dots, however, it looks like the result of a faint bit of additional aberration, not the actual diameter of bokeh dots. This might be to the Rokinon’s advantage, though, as other (not “dot”) bokeh character does appear to be a faint touch smoother if you look very closely.

Either way, if you’re looking to make gorgeous bokeh with an 85mm f/1.4 prime, both lenses deliver the goods, especially in the other, more tricky zones where there is background “clutter”. (Patterns, textures, …Christmas present ribbons?)

When stopping down, it seems as if the Sigma may very well have slightly smaller bokeh dots, but again, this could be due to the fact that although the cameras are tripod-mounted in the exact same spot, the actual angle of view may have a slightly different closeness. What does this mean? It means that, in the real world, you’ll get more bokeh out of either lens by simply leaning forward just one inch, especially when shooting very close-up. (At a great distance, the difference in bokeh, or we should say the difference in shallow depth, is imperceptible.)

What other quick conclusions were we able to draw during this test, you might ask? We’ll have full reviews of each lens coming soon, however, we have found a few things to be very clear already, based on our initial handling and testing of each lens. In no particular order, here are some comparison notes:

For the Canon RF-mount Rokinon/Samyang 85mm prime lens, the closest competitor is actually the Canon RF 85mm f/2 Macro IS STM, which has incredible image quality, macro capability, and stabilization to make up for the 1-EV slower brightness.

For the E-mount Sigma 85mm prime lens, the closest competitor is likely the Roki-Yang AF 85mm f/1.4 FE, if you’re on a bduget, or the DSLR-to-E-mount version Sigma 85mm f/1.4 DG HSM, which usually costs exactly the same, and has similar performance, but weighs a whole pound more, and is massively front-heavy due to its DSLR optical formula.

In conclusion, both of these lenses deliver impressive results, considering their price. The bokeh characteristics are similar, but the Rokinon/Samyang shows a bit more aberration in some of its bokeh while the Sigma shows a little more crisp, well-defined bokeh dots. This is a highly subjective area of image quality, so all photographers are welcome to draw their own conclusions! (Please leave a comment below with your thoughts…)

Both lenses exhibit beautifully soft, smooth bokeh in other areas, and both lenses have naturally pleasing characteristics in terms of flare and vignetting. (Stay tuned for additional sample images in our full reviews coming soon!)

Considering the significant price difference, we might be inclined to only recommend one lens, however, the overall quality of the Sigma is great enough that we absolutely view it as a desirable alternative to the flagship name-brand lenses which cost significantly more. We can’t wait for this Sigma lens to become available on Canon RF and Nikon Z mounts!

Having said that, of course, if you’re on a tight budget then the Rokinon/Samyang will absolutely deliver gorgeous images; just be sure to take good care of the slightly less robust, ruggedly built lens and you’ll be fine.

Thanks for reading, and happy holidays!