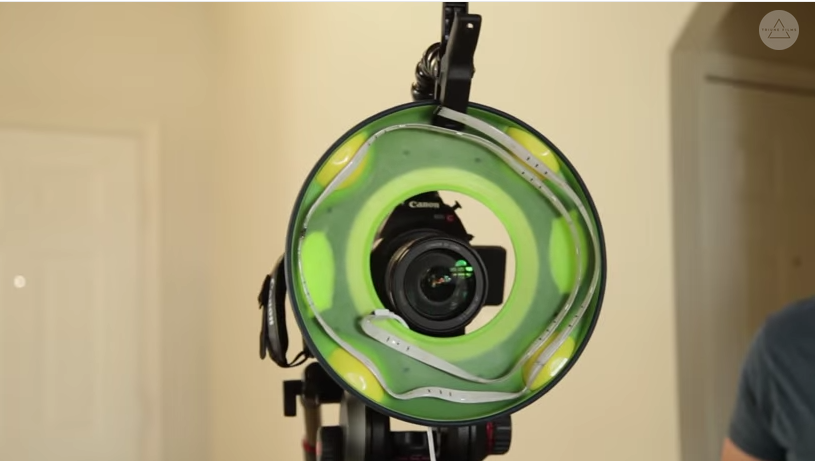 DIY: Build a Simple Ring Light Using LED Strips and a Frisbee For Around $30

Ring lights can create a distinct look for photographers and vloggers.  And while ring lights are getting less and less expensive, some photographers may still want to create one themselves.  If that sounds like you, here are two great videos for DIY Ring Lights.

We’ve featured a few DIY ring lights in the past, but I don’t think any as easy as the one you’re about to see in the following video. This one involves a frisbee and a strip (or two) of LED lights. In the video made by Film Riot, they use the Sylvania Mosaic Flexible Light Kit which have adhesive backs so you can stick them to anything for additional lighting. You can also change the colors of the light as well for varying effects.

The ring light isn’t super strong, but can also be used for a fill light, as pointed out in the video. It’s not the prettiest lighting hack out there, but it is a great alternative for those handful of shots that would be great with a ring light, without the price tag.

(As a bonus, the end of the video talks a bit about using royalty-free music and some of the companies they use. We also love The Music Bed, which they mention in the clip).

DigitalRev is known for doing some pretty interesting things on their YouTube channel. In one of their latest episodes they tasked a professional photographer with building a DIY ring light to use on a model who would be showing up in 2 hours.

Amazingly the design that he came up with is actually pretty perfect, and while not ideal for all situations, it works pretty well for a DIY light build. Basically they destroyed a fan, some bathroom lights and built a DIY power-box to power the thing. Then they added a  mount making it compatible with a lightstand or tripod.   Check out the video below, its a pretty neat setup honestly.