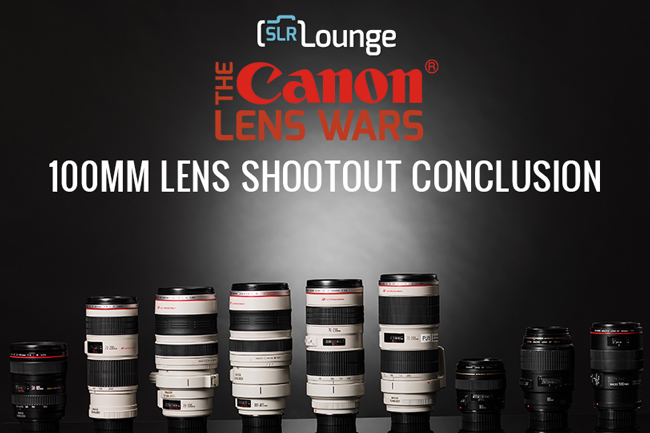 In this third segment, we are going to compare our favorites lenses from both part 1 and part 2 to come up with an overall conclusion.

A Note on the Canon 100mm Macro Lens

Now, one thing to remember before we get started is that in the 100mm primes, the Canon 100mm f/2.8L Macro IS is a macro lens that has a short minimum focus distance of 12 inches so you can get up close for macro shots. It is a unique function that the other lenses in this test do not possess.

Ok, so let’s start from the top with their aesthetic quality and sharpness at their respective Wide Open Apertures (WOA). Once again, this is a visual test of differences, not a technical test. So, we are trying to distinguish differences in appearance while viewing images full screen on a Dell U2713HM 27″ IPS monitor.

I’ll be honest, it was actually rather tough telling the difference between these 4 lenses visually. As you can see in the image below, I did notice that the Canon 100mm f/2 expectedly had a bit more bokeh at its WOA of f/2.0 compared to the other lenses which all have a WOA of f/2.8. Nevertheless, it wasn’t a major difference and it was kind of hard to tell. 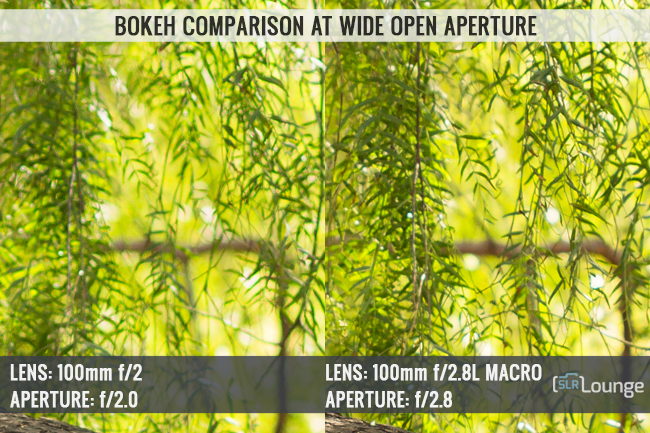 The three lenses with WOA f/2.8 all have very similar bokeh and the only way to tell between them is to compare them side-by-side as seen below. 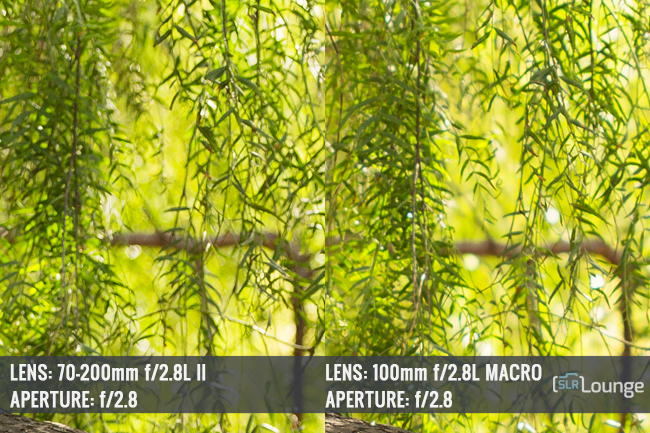 When it comes to sharpness at their WOAs, both 70-200mm zooms and the 100mm f/2.8L Macro had virtually identical performance. 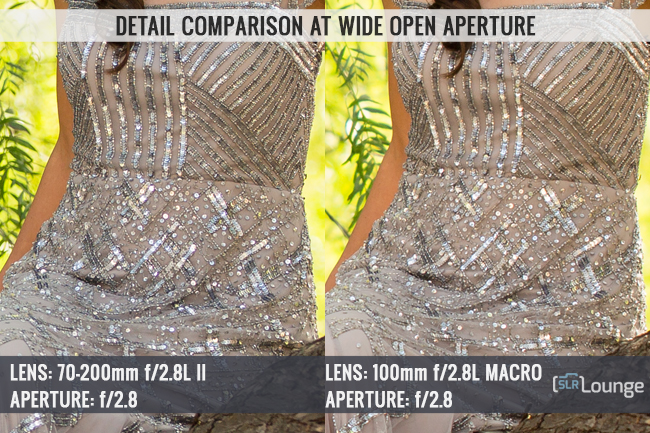 On the other hand, the Canon 100mm f/2 was slightly softer at f/2 than the other lenses. It is still usable, however. 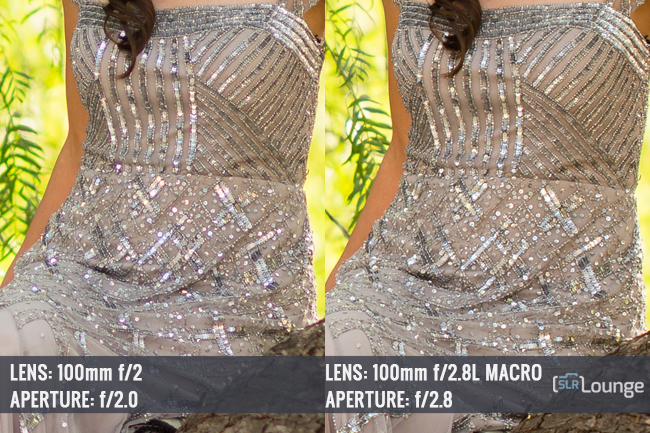 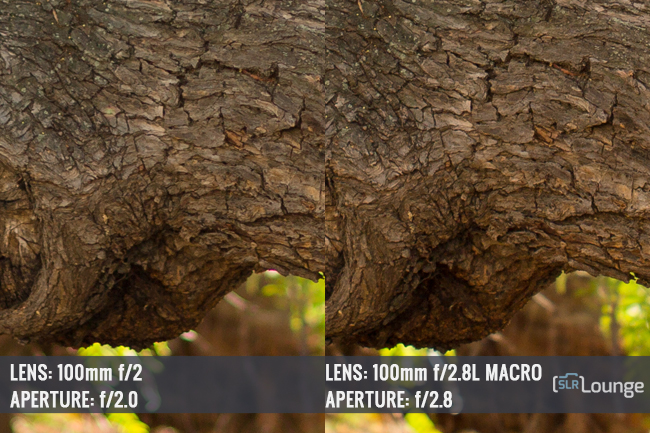 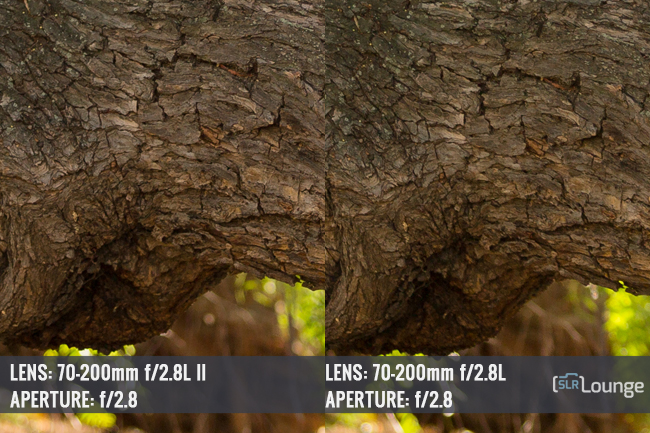 Nevertheless, I am still impressed with all four of these lenses. All of them are quite amazing in terms of image quality and visual appeal.

Ok, so let’s go ahead and bring them all up to their Widest Common Aperture (WCA) of f/2.8 and see if the visual differences between the Canon 100mm f/2 and the other lenses are less noticeable.

At f/2.8 all of the lenses appeared to equalize for the most part visually. I could still tell that the L series lenses had a bit more color and contrast than the 100mm f/2. 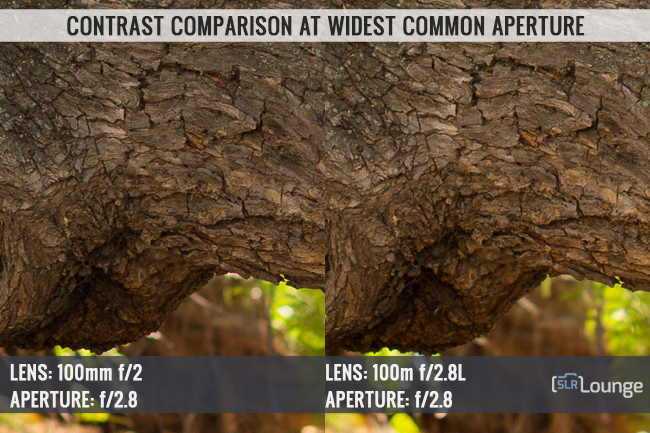 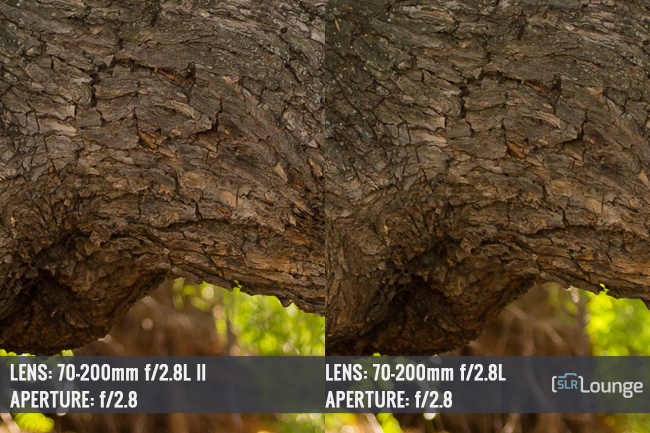 But trying to tell the difference between each lens in terms of bokeh, and sharpness became pretty difficult when looking at full-size view without zooming in.

Even when zoomed in, the differences were extremely minor. I was able to catch slightly less sharpness in the Canon 100mm f/2 compared to the other lenses, but again, it was just a tiny splitting hairs type of difference. 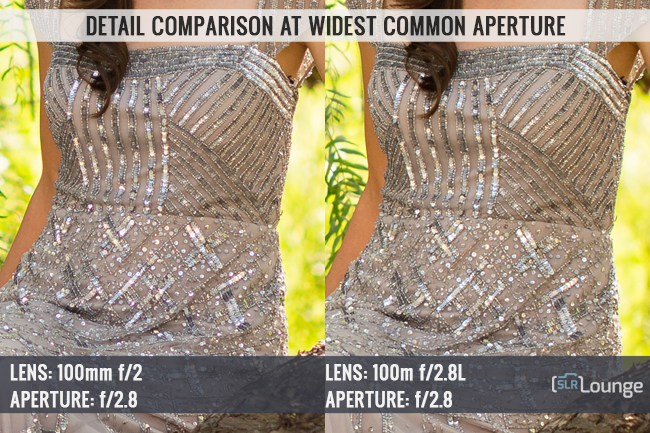 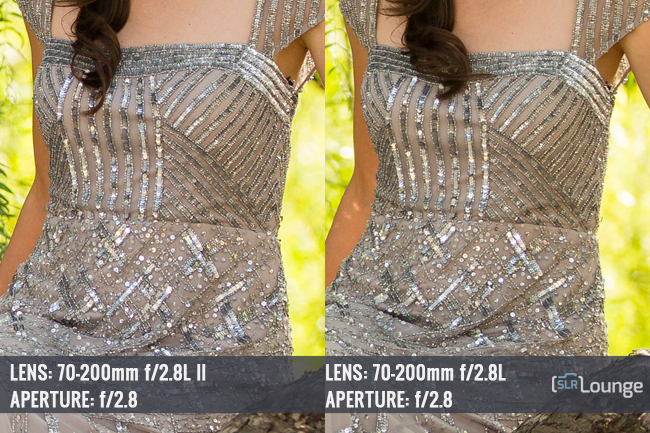 Edge sharpness at f/2.8 was roughly pretty equal as well, however, it looked like the 100mm f/2 pulled slightly ahead of the crowd, as you can see, towards the right of the model in the branch. 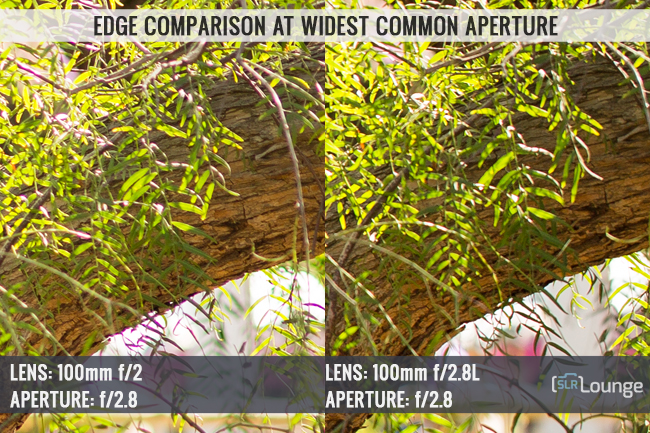 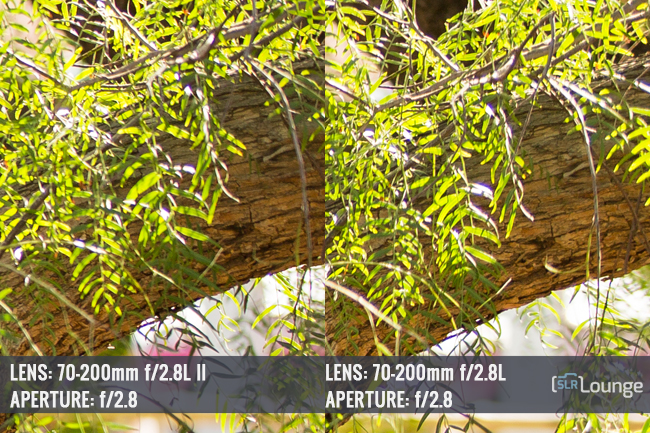 Again, from f/4 and beyond, all of the lenses were visually pretty equal, although you can still get slightly better contrast and color out of the L series lenses than the 100mm f/2. 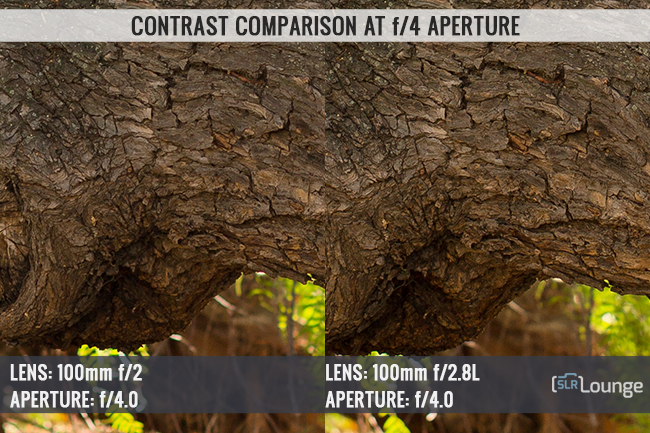 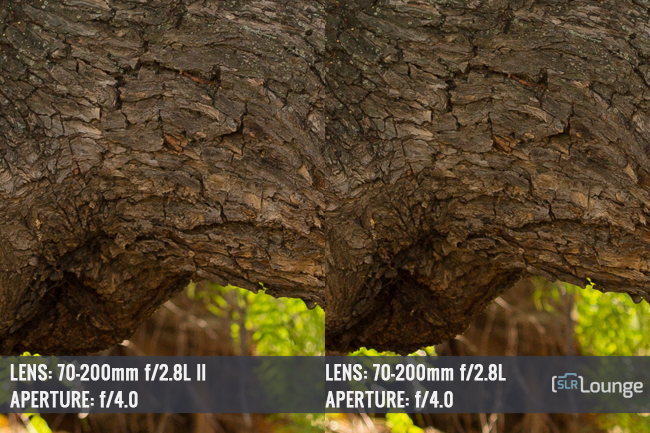 Edge sharpness on all lenses was still solid, but again the 100mm f/2 seemed to be just a bit more crisp, although to be honest, it is tough to see visually without doing zoomed in side by sides. 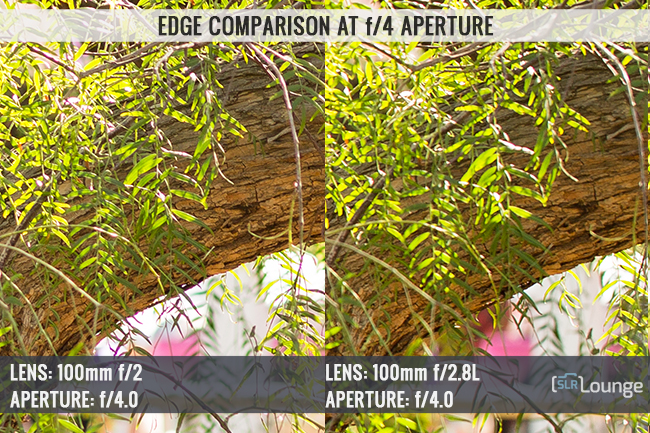 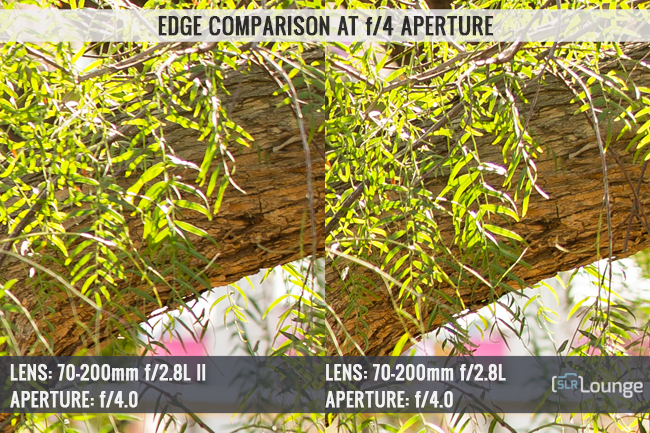 The Prime Lens That We Still Can’t Recommend

Despite the fact that it has slightly less contrast/color, the Canon 100mm f/2 does look better aesthetically than the other lenses here.

But as we mentioned earlier in part 1, the Canon 100mm f/2 is only a portrait lens since it doesn’t have close up macro focusing functionality. This means that it really competes with the Canon 85mm f/1.8, not the 100mm f/2.8L Macro IS.

That being said, compared to the 100mm f/2 the 85mm f/1.8 has slightly better low light performance at f/1.8 instead of f/2.0, creates slightly more bokeh, and at least for me, has a more desired focal length for my style of shooting portraits.

The Canon 100mm Lens that Doubles as Macro

Now, if you need a macro lens, then your best option is going to be the Canon 100mm f/2.8L Macro IS.

The L version of the 100mm macro is priced at $1,049, while the non-L version without stabilization is $600. Again, given the difference in price isn’t absolutely huge, I would go with the L version because it is far superior in functionality, and it will also give you better image quality.

Now aesthetically speaking, while the Canon 100mm f/2.8L was probably my second favorite in this final comparison, the difference between it and the two 70-200s was really splitting hairs. It was incredibly tough to differentiate, even when zoomed.

So, unless you need the macro capability, the Canon 70-200s will give you virtually identical image aesthetics and quality, and give you the versatility that comes from a zoom lens.

Additionally, if the $2,499 Canon 70-200 f2.8L II with Image Stabilization is too much for your budget, you can always opt for the $1,499 70-200 mm f/2.8L without Image Stabilization that matches the image quality of its more expensive brother, and only lacks image stabilization.

When it comes to the low light super high bokeh prime, follow my suggestion and stick with one of the 85mm lenses. The Canon 85mm f/1.8 is cheaper than the 100mm f/2, it will give you better low light performance, more bokeh, and roughly the same image quality. On top of that, when you are ready to sell and move to the 85mm f/1.2, the 85mm f/1.8 will be an easier sell than the 100mm f/2.

Shortcut-S: A Photoshop Dedicated Keyboard Promises to Speed Up Workflow