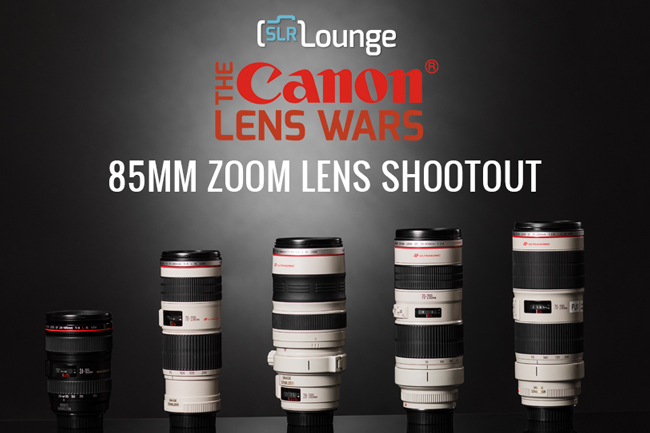 Finally, in Part III, we will again give our 85mm focal range conclusion.

Again, we are going to start by doing some basic visual comparisons for each lens at their Wide Open Aperture (WOA). The images are viewed full screen on the Dell U2713HM 27″ IPS monitor.

When we did the 70mm focal range zoom lens testing, we ended up with the Canon 70-200 f/2.8L IS Mark II and the 70-200mm f/2.8L without IS as our two favorite lenses because of their overall image quality. In fact, the performance of both lenses are very similar to each other. The major difference between these two lenses is the lack of image stabilization for the 70-200mm f/2.8 mark IS.

Let’s see if the same holds true within the 85mm zoom focal range. As you can see in the two images below, it is very difficult to tell which of the two 70-200 2.8 lens has a better image quality.

Next, when I zoom into the image, I immediately notice how much bokeh is created by both lenses. Both zoom lenses are capable of creating smooth, creamy bokeh when shooting wide open at f/2.8. Again, both lenses are very difficult to distinguish from one another visually. 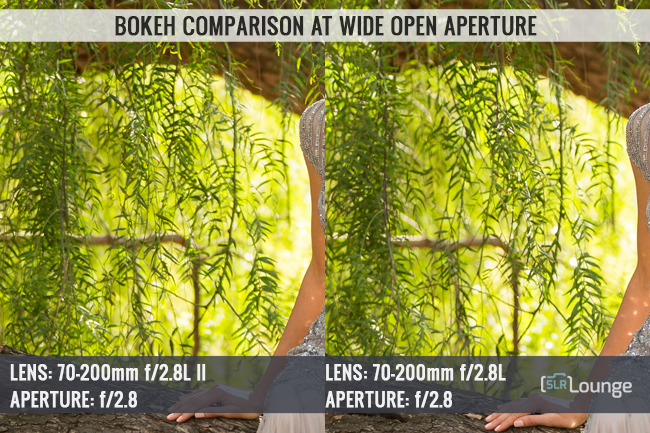 Having a maximum aperture of f/2.8 puts both lenses at an advantage compared to the other lenses in this focal length, which all have a WOA of f/4 or higher. The difference in the amount of bokeh created by the two 70-200 f/2.8 zooms can be seen when we compared them to a zoom lens with a WOA of f/4 like the Canon 24-105mm f/4L, as seen below. 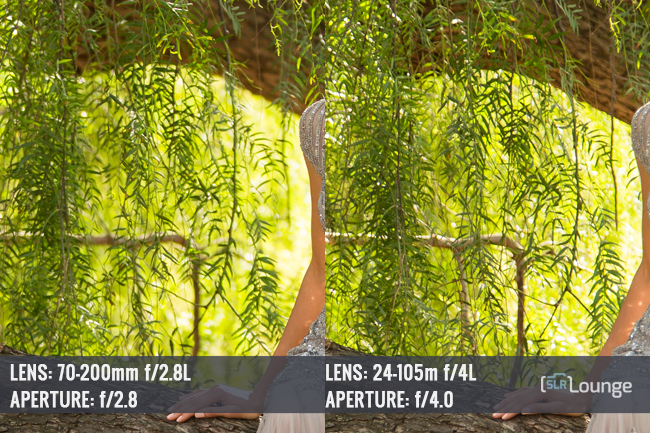 Additionally, the two 70-200mm 2.8 zooms do a better job at separating our model from the background, as seen below. 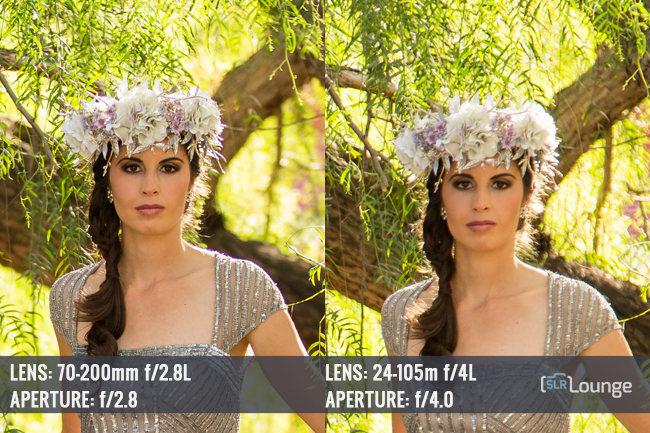 Overall, it is pretty easy to see that the 70-200mm 2.8 II and the non-stabilized 70-200mm 2.8 are clearly ahead of the rest in terms of aesthetics quality, the amount of bokeh, clarity and sharpness. 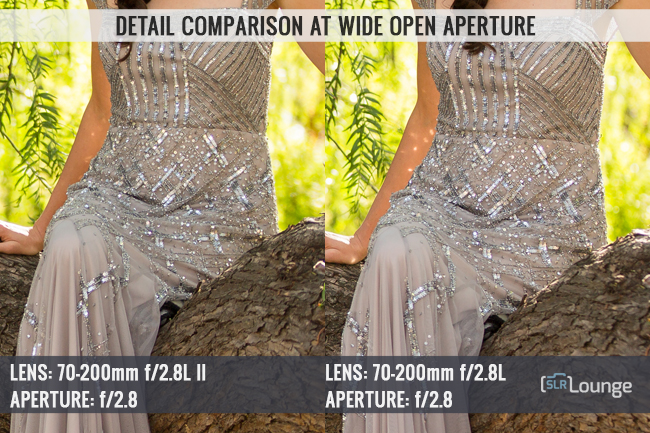 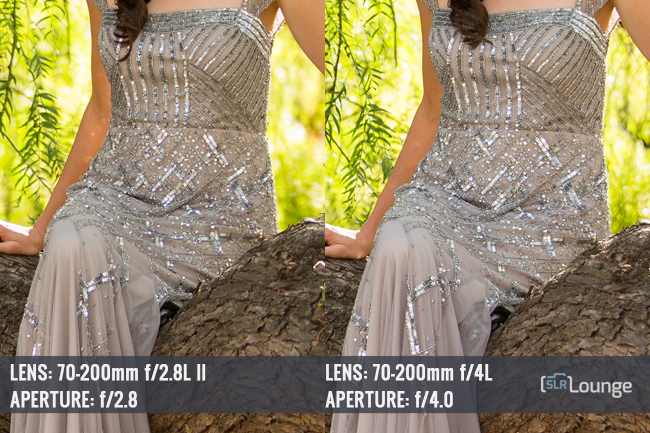 And when we examine the detail resolution, we can see that the 70-200mm f4 retains a lot of detail in the dress, as seen below. 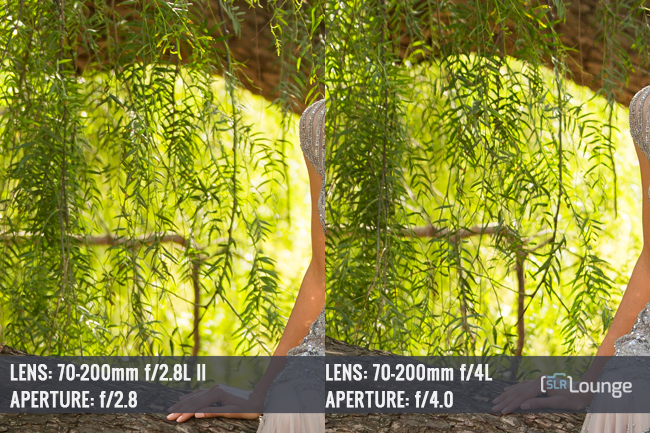 When we zoom into the images above, we can see that just like their performance at the 70mm focal length, both the 24-105mm and the 28-300mm appear to be a little soft and lack the visual clarity that we have been seeing in the Canon 70-200mm models. The 24-105 being the worst by far the worst of the bunch as can be seen below. 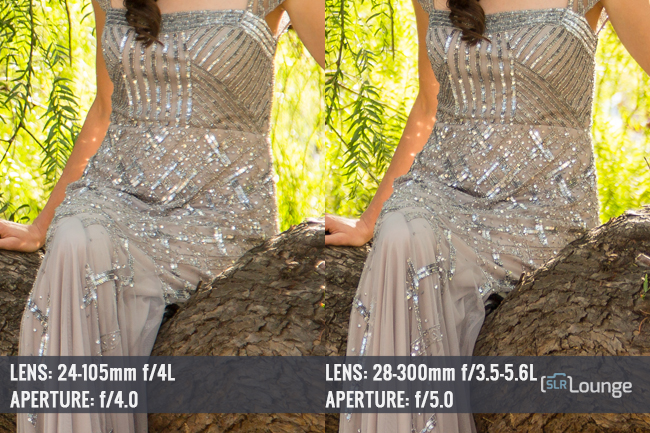 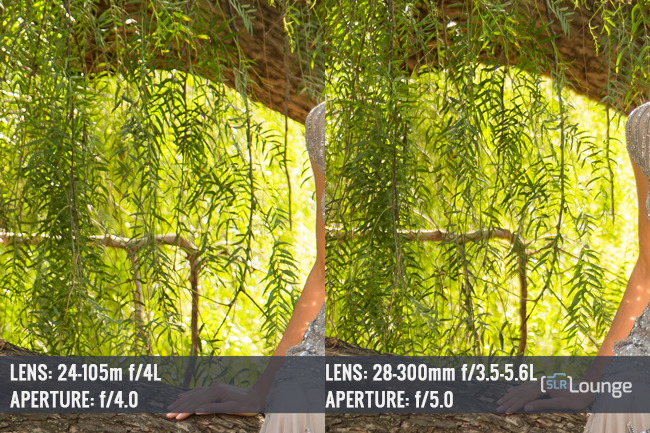 In addition, while it isn’t distracting or super obvious, I do notice a tiny bit more barrel distortion with the 24-105mm and the 28-300mm.

This is more noticeable when which can be seen when you compare the 28-300mm with the Canon 70-200mm f/2.8L image. Particularly when they are overlaid with one another.

Let’s take a look at these lenses at their Widest Common Aperture (WCA) of f/5.6 and see if the gap in image quality has shrunk. 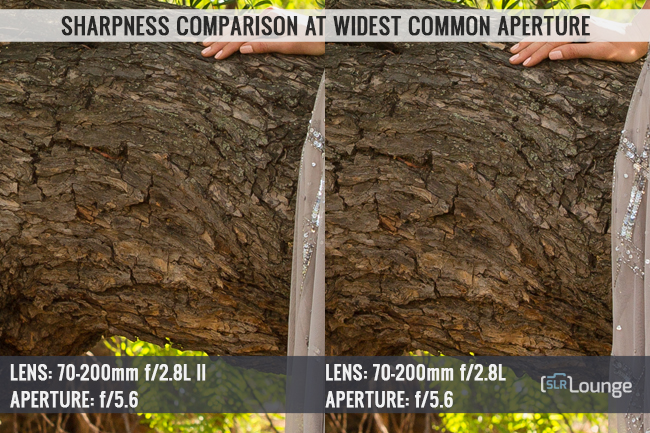 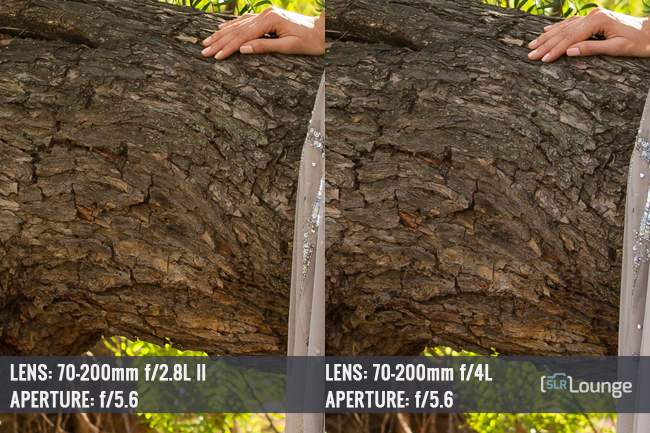 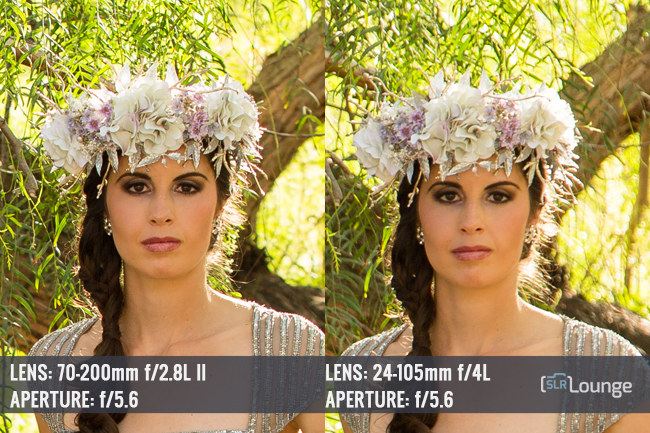 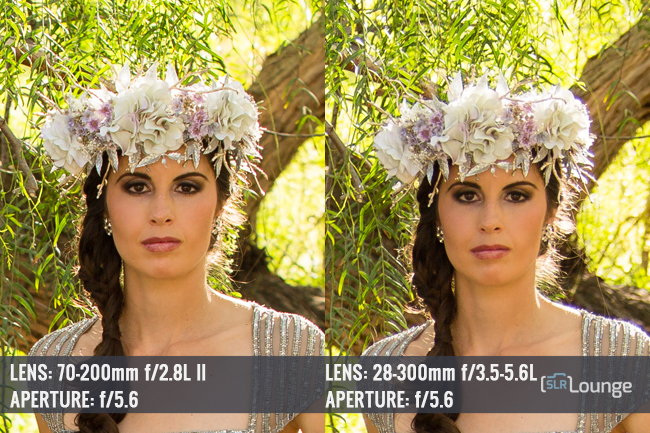 In second-to-last place we have the Canon 28-300mm, which is quite visibly better than the 24-105mm, but still not quite as good as the other telephoto lenses at the 85mm focal length. 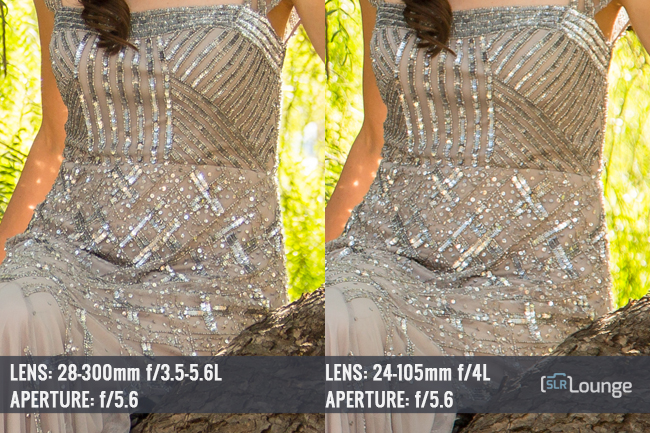 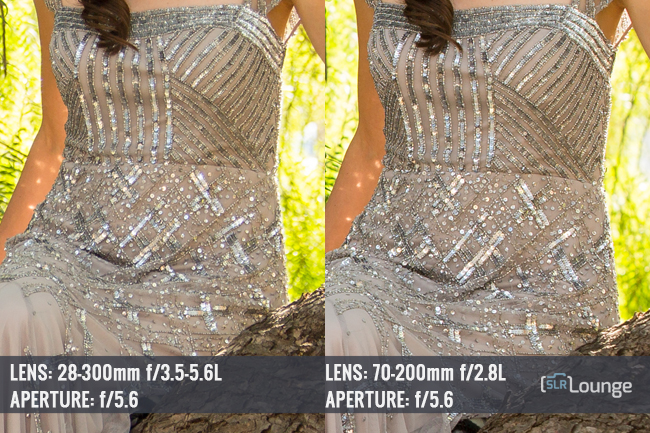 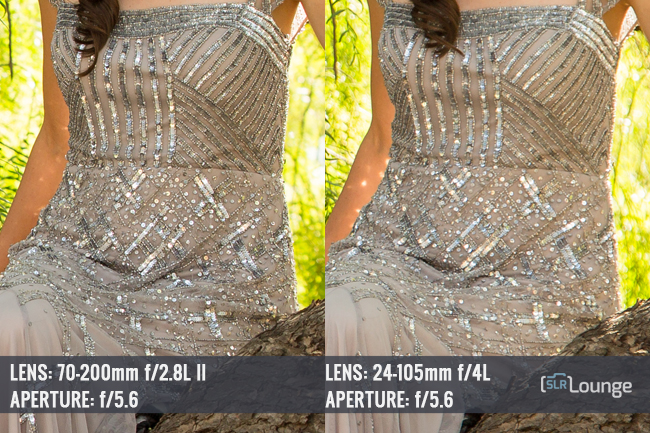 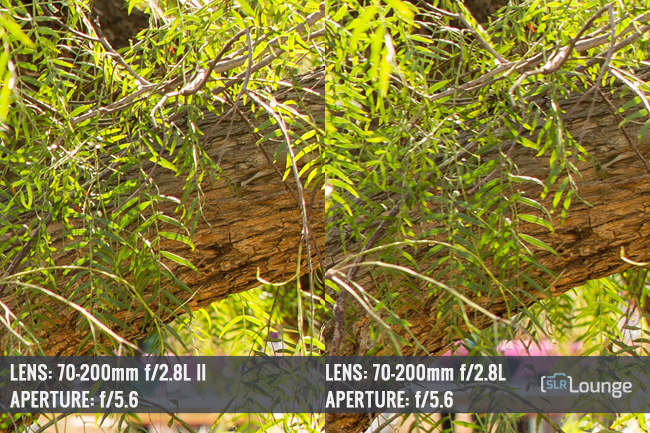 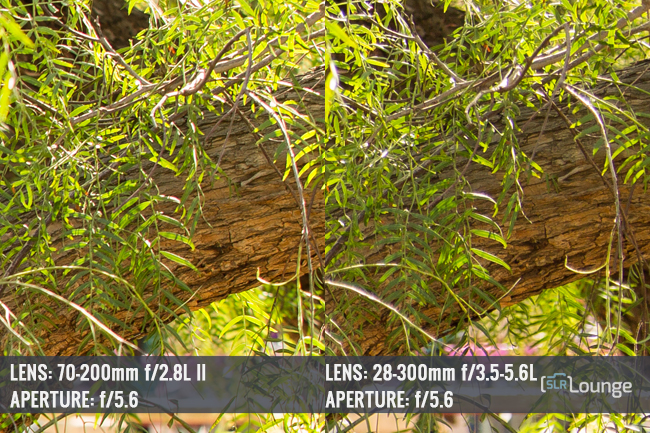 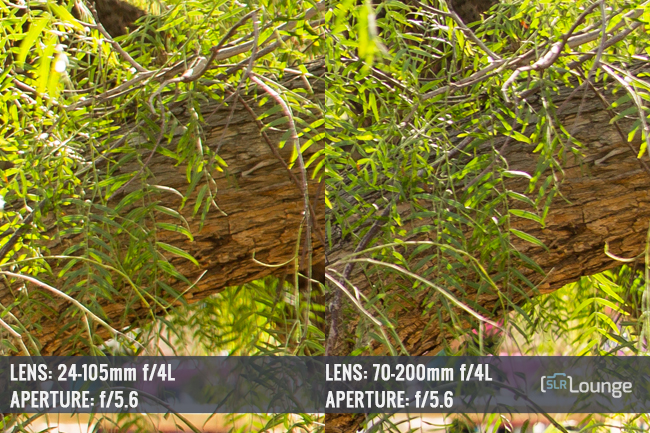 Ok, at the 85mm focal length we ended up with the same conclusions about these lenses that we had earlier when we compared them at 70mm.

If it is in the budget, then the lens that will give you the best image quality, the most bokeh, the best low light performance including image stabilization is the Canon 70-200mm f/2.8L II.

Once again, you do pay the price for quality, and this lens is a $2,499 investment. However, this is a case where we are comfortable with the performance versus the overall price as it does offer substantially more features and functionality than the other lenses in this group.

The $2,689 Canon 28-300mm f/3.5-5.6L has been hard to ignore throughout the Canon Lens Wars series simply because of its incredible focal range flexibility, and overall good performance throughout.

It is the most expensive lens of the bunch, but if you were limited or could only have one lens in your kit, this would be the lens I would go for.

Nevertheless, even though the lens is versatile, its performance at each range is good, but not necessarily great.

The Lenses to Avoid

Again, I would skip over the Canon 24-105mm f/4L. Even though it is the least expensive lens of the group at $1,150, it is still not necessarily “cheap.” Spending over a thousand dollars on a lens is quite a bit, especially given that it just doesn’t really do anything better than the other lenses. For the money, you are better off jumping up a few hundred dollars to the 70-200 f/2.8L non-IS at around $1,500.

Unfortunately, the 24-105mm f/4L has not performed that well across all the focal lengths that we’ve covered so far, so its a tough lens to really recommend. I know this stinks because it is a lens many people own simply because it has been a kit lens for quite a while. But, the good news is that by selling this lens, you will be 60-70% of the way to a far better alternative.