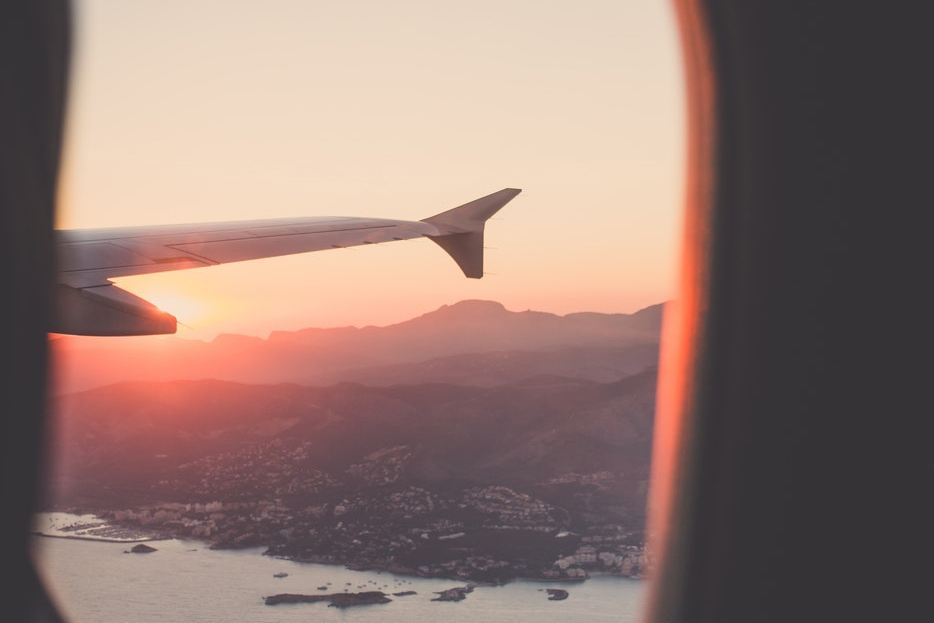 Beware of This Scam Targeting Travel Photographers and Instagram Influencers

A new elaborate scam is targeting photographers and other Instagram influencers. The victims have lost thousands of dollars and have had to withstand the emotional weight of being manipulated in a foreign country, thousands of miles away from home.

In short, the scam starts with a well-written, well-researched email presenting an opportunity to travel to Indonesia for a photography project. Every step of the scheme seems legitimate, including the emails, the NDAs, the creative briefs, the contracts, the phone communications and more. However, while in Indonesia, the victims are convinced to pay up front for various fees with promises of reimbursement.  After being given the run around, the perpetrators disappear.

We’ve received direct accounts from two victims who have asked us to share their stories to help others avoid the nightmares they experienced. Thank you to Carley Rudd and Henry Wu for coming forward with your accounts.

The Key points (from both cases)

The Scammer sends an email pretending to be “Wendi Murdoch.” The actual Wendi Murdoch is a high profile Chinese-American businesswoman and art philanthropist. 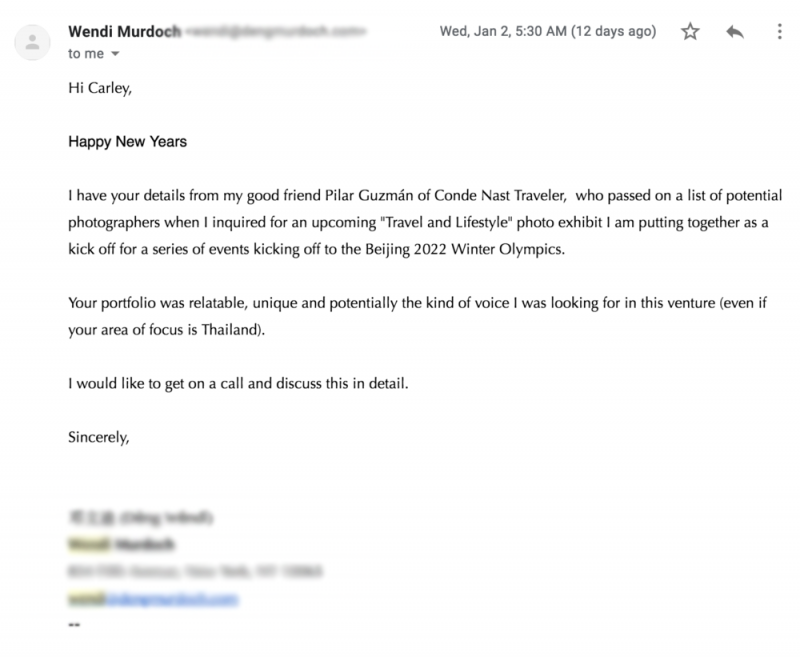 Victims appear to be well researched – “She claimed to have received my name from Condé Nast Traveler (who I’ve worked with in the past and they actually just posted one of my photos on their IG account 2 days prior). It seemed a little too good to be true, but I figured I would at least hear them out on a phone call,” according to Carley.

Scammer knows intimate details of Wendi Murdoch – “She said she was headed back to NY from St. Barts that night and would be able to talk with me the next day, which checked out because the real Wendi Murdoch’s last Instagram post was from St. Barts,” according to Carley.

In Henry’s case, “We tried getting her on the phone to discuss details but her assistant Aaron said that she’d be unavailable that day because she was spending it with her family for her birthday. It was actually Wendi Murdoch’s birthday, so we wished her a great day with her family.”

Victims are given fake assignments – “The fake assignment is to shoot a series of images highlighting Chinese heritage in Southeast Asia for a personal upcoming art exhibit in connection with the 2022 Beijing Olympics,” according to Carley. 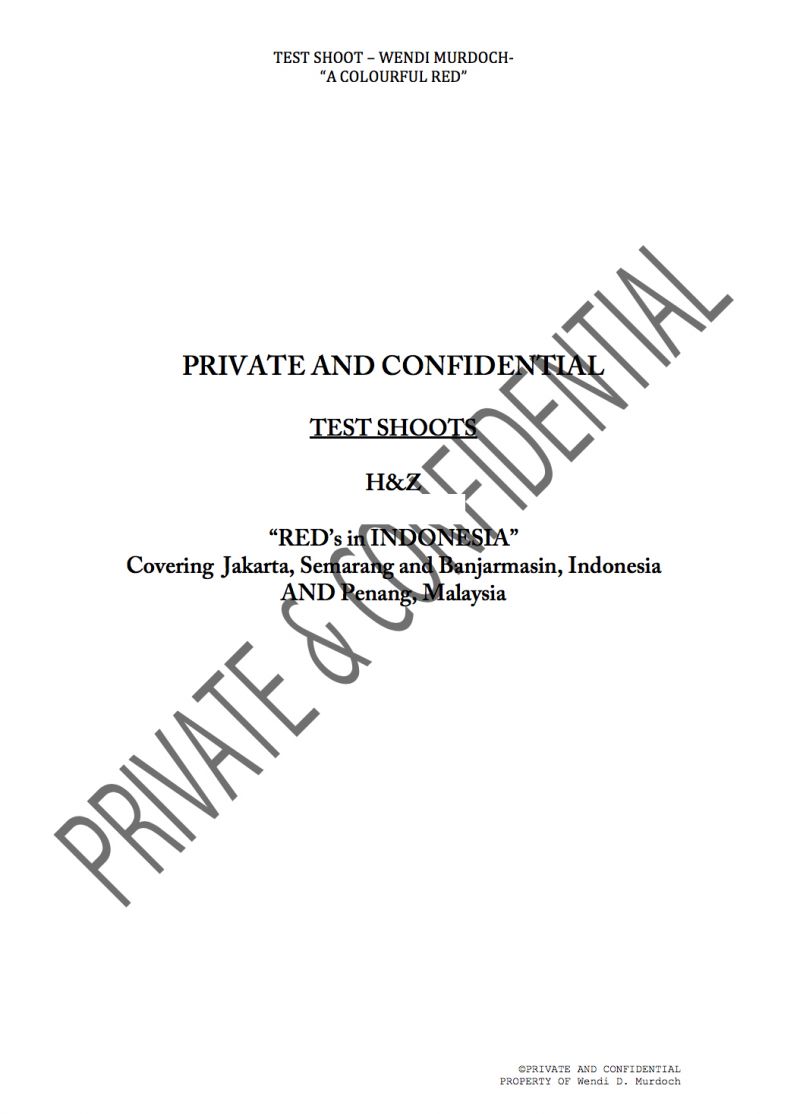 Scammers use legitimate negotiation tactics – “After a couple more calls negotiating budget and timelines – we agreed on a price that was higher and a timeline that was later than she initially offered. She would later use that to defend any ideas of pre-payment on her part,” according to Henry.

Victims are required to pay $1000 to $1400 – The money is for an expedited photography permit that the client “overlooked.”  According to Henry, “The fees were kind of high ($1,100) but he promised all expenses would be reimbursed per the contract and not to worry about it. As we were just 6 hours from the flight, it was hard to contest this.”

Drivers greet victims with signs.  Below is Carley’s driver: 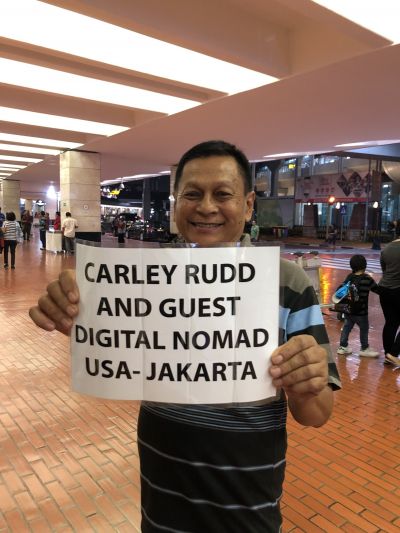 Below is Henry’s Driver and his license plate: 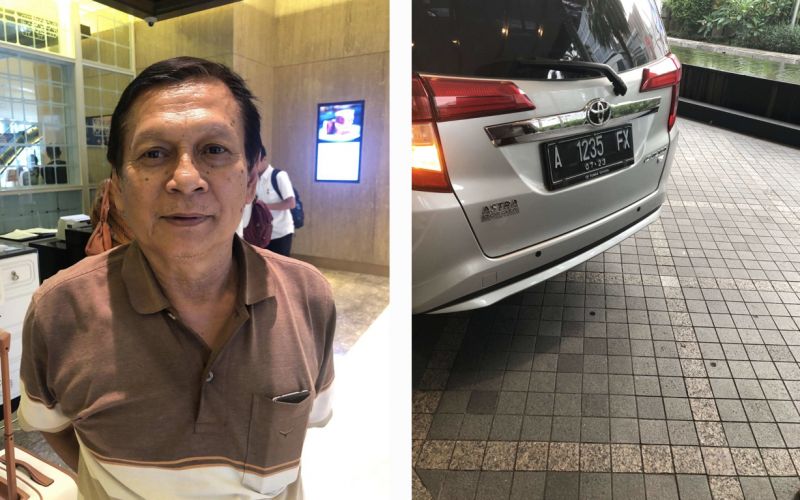 The scammers use official seals –   “That afternoon, we met our friend who is a local for dinner and spent the afternoon with him before he drove us back to the hotel. We showed our friend the photography permit and he thought it didn’t look official, but the seal was legit,” according to Carley.

Scammers create accusations and conflict – “Aaron seemed very concerned that I may have breached the NDA and wanted to know exactly what we did with him. He was on edge that we weren’t back at the hotel and wanted me to call Wendi first thing the next morning (5:00 am) to discuss things,” according to Carley.

“At 7:30 am, Wendi called us urgently to tell us that the driver and the transportation company are refusing to work with us because we had been racist by taking photos of him. This was one of her key tactics that we realized later. Attack us with strange things so we have to defend our position. Then ask for money while we’re in this defensive state. While we were apologizing for ‘offending’ the driver, she casually mentioned that there would be another photography fee for the last two cities,” according to Henry

Scammers make odd requests – “She asked if we wouldn’t mind splitting up for the day. She wanted Jake to use one of my cameras to cover one area while I covered another. First off, that didn’t feel safe at all. And I was taken off guard because why would she want someone else taking photographs for an assignment she specifically hired me for. And why would she want us to split up. It felt so weird. I replied no, my husband and I will stay together.”

Scammers end things pleasantly – “We ended the call with her saying that she would love to meet me in person in NYC. She would have her assistant call back within the hour to confirm the change in our production schedule and next steps after shooting that day.  Aaron never called. Our worst fears were confirmed: this was all a highly elaborate scam.”

Scammers have many victims – “I pinged my friend on Facebook messenger to tell him I was in a weird situation here in Jakarta and if I could call him. He gave me his WhatsApp contact info and within 10 seconds of my telling him what happened, he knew what was happening to me. He gave me a link to the Hollywood Reporter where many other people (filmmakers, military consultants, hair stylists, etc) had been scammed with the same thing. They even had recordings of the scammer and one of them matched “Wendi’s voice exactly,” according to Henry.

If you or anyone you know has been scammed, please see the contact information for the authorities at the bottom on Henry’s post. 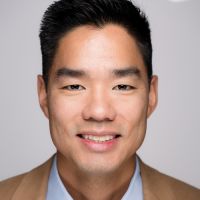