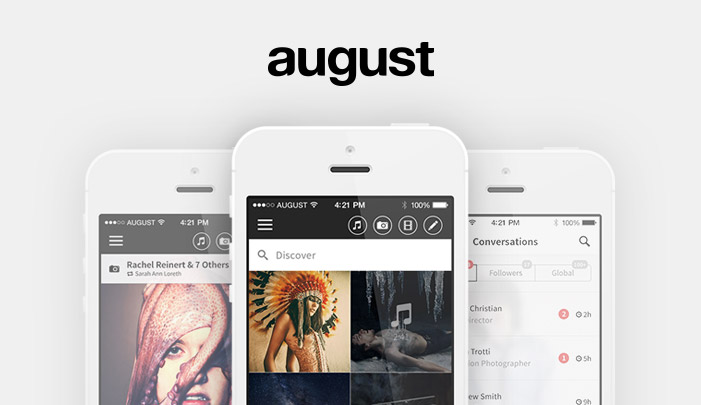 August: A Social Media Game Changer for All Artists?

Discovering new artist’s work without getting distracted by cat videos, photos of people’s lunch or meaningless Facebook rants can be fairly difficult. August is a new service that was created to solve that problem by providing a platform on which artists can publish their work and discover other artist’s work. The co-founder of August, Sean Wing, takes some time to tell us about this exciting new platform for artists and how it will effect the way artists use social media to showcase their work.

How did you come up with the idea of August?

There are many ideas behind August, but it all started with my vision as a consumer in tandem with my deep understanding of artists for what the world of media should be like.

I literally took a blank sheet of paper and architected a world of media that I wanted to be a part of as a consumer, and one that I knew would attain to the dreams of every artist in their drive to ceaselessly and sustainably create remarkable works of art. 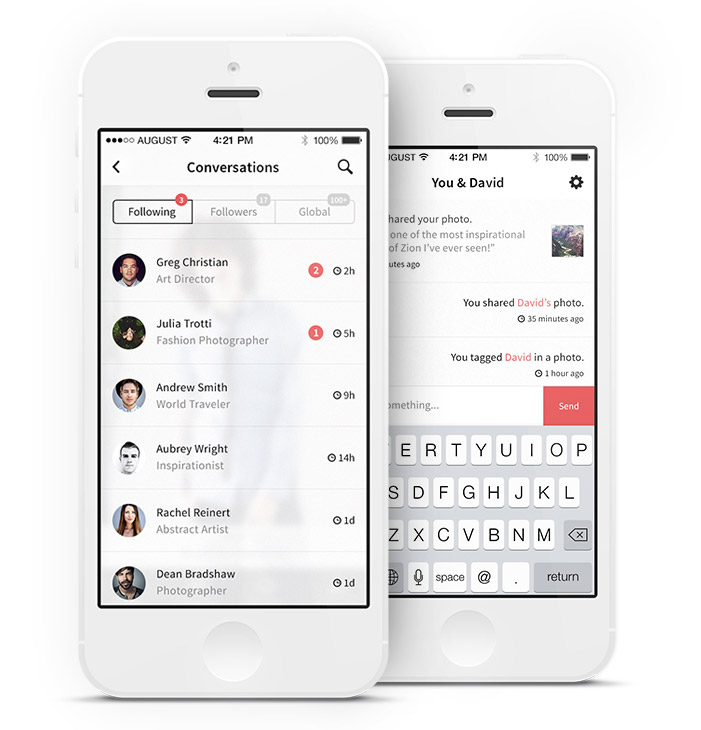 The vision for August started when I was 18 working with Bob Hurley over at Hurley Clothing. I was immersed into the culture of the brand, and in particular, the history that it had with artists of all types. I began conversation after conversation with these artists and began to understand the world they lived in, the challenges they faced, the dreams they had, the things that they were driven by, and overall, the passion they had for their work and their desire to reach the world with it.

It was this desire that compelled them to partner with companies like Hurley, and gave me the realization that technology and the Internet could amplify this much better.

From there, I began engaging in more conversations with artists of all types and successes, learning what I could as I began designing what I saw as the technology version of Hurley. 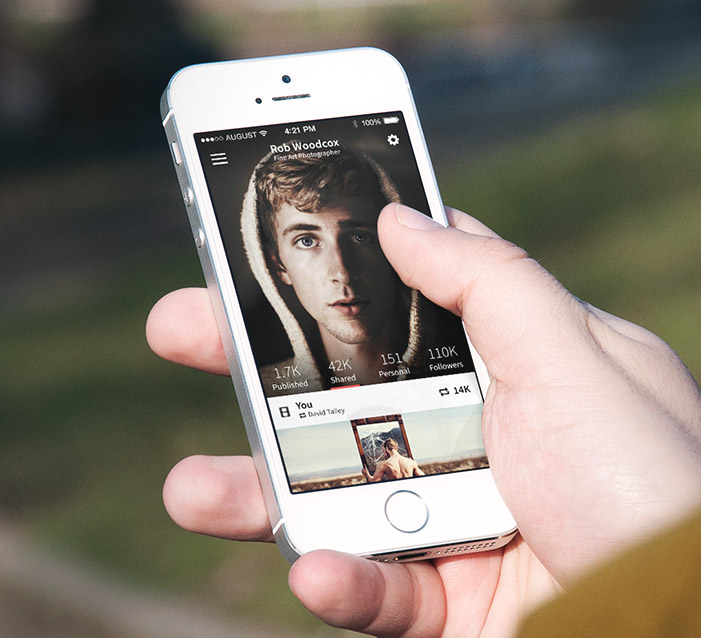 The vision of August began to take shape through years of these constant conversations, and was fueled by the belief of John Sharpe who is now the CEO and co-founder of August.

Around 2011, I launched my own fashion brand to validate some of the underlying principles behind this vision to great success. It was then that I decided to create a product that would achieve this vision by solving the problems that prevented it from being realized in the status quo.

I spent a solid year architecting this platform based upon the thousands of conversations I had engaged in, and the vision that I was dreaming of. From there, I recruited one of the designers from the fashion company who had fallen in love with August and we designed the very first prototype.

With that first prototype, I began pitching it to all the artists and consumers I had previously talked with to solicit their first impressions, critiques, ideas, etc. Amongst all the feedback, the one thing that stood out was the way these artists resonated with what I had created, and not only their intense desire to actually use it, but to support it by sharing the concept with others. 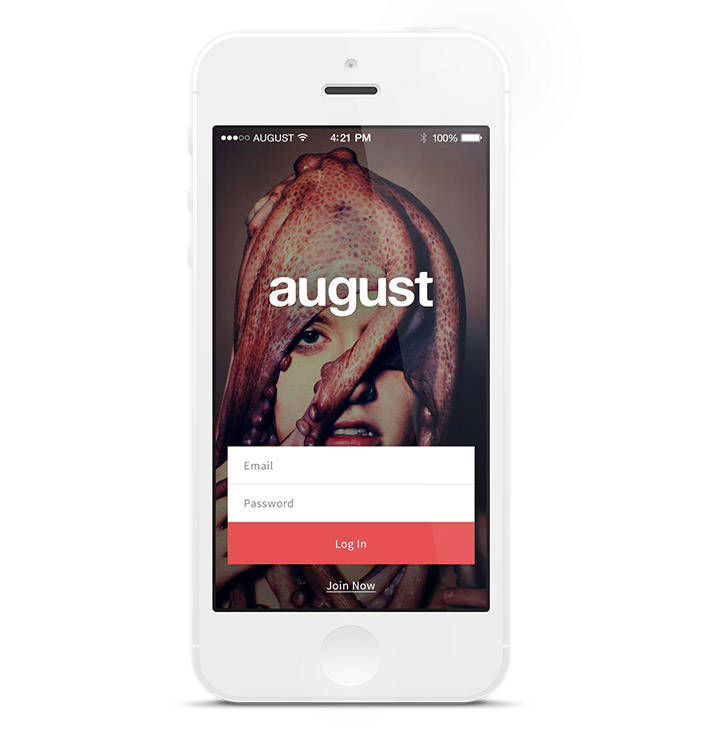 It was at this point that I new I was on to something, and began building a team of talent that I could work with to recreate the first prototype into a platform that was as close to perfect as I could dream of.

This team started with Austin Neill, who is by far the most remarkable designer I have ever had the pleasure of meeting and working with, and whose talent speaks for itself with the beauty and intuitiveness of the work that encapsulates every aspect of August.

From there, Leland Cope joined the team who is not only the most interesting man in the world, but has the uncanny ability to build anything that can be dreamed up, which will undoubtedly be understood soon enough by the incredible infrastructure that he has built to support and operate such an extensive platform as August

And last but not least, Brandon Friend who jumped on board as the man who single handily has developed what could very well be the most beautiful and intuitive experience around media that I have ever laid eyes on, and who can solve any problem with a mind that Einstein would be envious of (Brandon is getting his PhD in Mathematics for the fun of it, so go figure).

That is how August got started, though, and how it has evolved over the years to the point we are at now as we prepare to launch it. 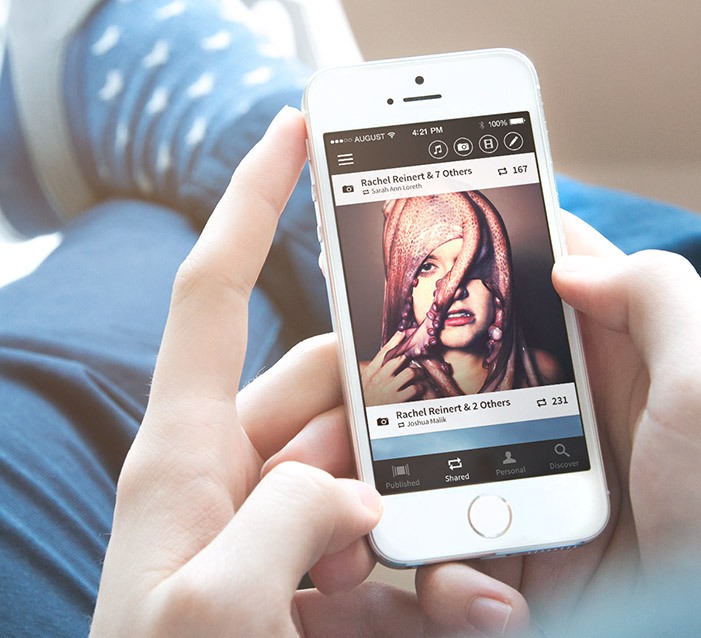 What sets August apart from other social networks?

August isn’t a social network as much as it is a simple discovery and distribution channel for media.

When it comes to media, I have as a consumer a vast selection of places to choose from to discover media created by other consumers like me.

I go to Instagram to look and follow the photos that all my friends create. I go to Tumblr to see all the memes and miscellaneous pieces of media that they have to share.

I go to Facebook to see what my friends are saying, doing, and socializing around, such as your typical buzz feed article or funny video. I go to YouTube to see the specific videos that my friends have sent me, or the channels that I love have created. 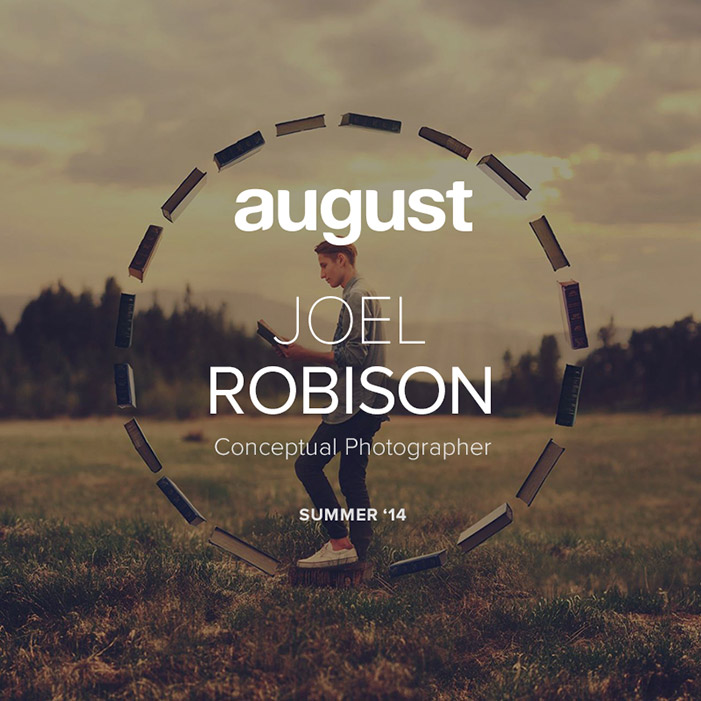 Yet, when it comes to discovering the media created by actual artists, I have no where to go. I can subscribe to specific blogs, or stumble upon a great piece that someone else has shared via these networks, but that is about it.

As a consumer, I have no place where I can go to specifically discover artistic media created by artists and/or shared by my friends in a social experience that focuses on what I actually value. August is simply the experience for this discovery.

For example, the reason we use something like Twitter is because it provides us a great utility to share with the world in 140 characters whatever is on our mind.

But what we value so much about this utility is the emotional reward it gives us when we have hundreds or thousands of people who follow us, favorite and retweet our messages, and overall, recognize and appreciate us for being “cool.” It is human nature, and we all thrive on it. 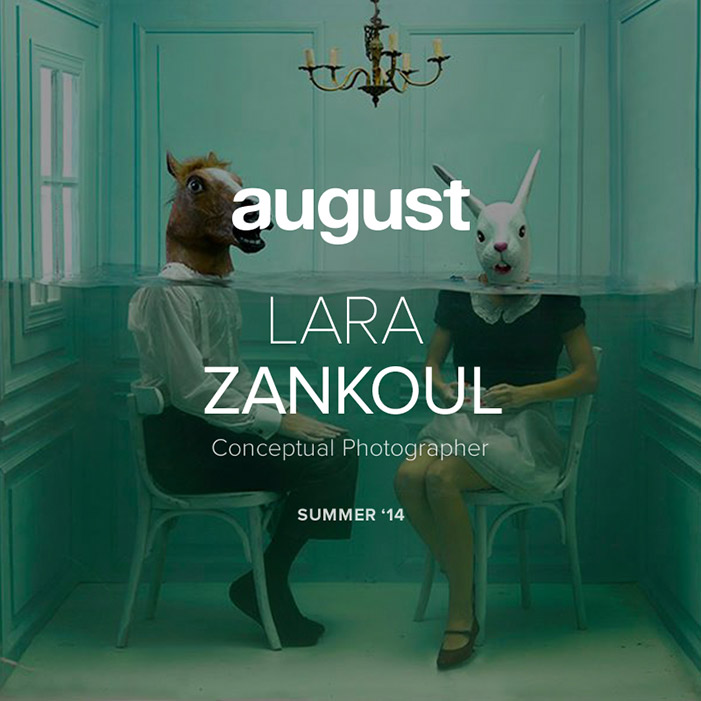 These principles of human nature apply to every consumer network and technology.

So when it comes to the utility of August, what I get that I can’t get anywhere else is the ability to tap into a place where I can be immersed into the constant discovery of media created by the world’s most talented artists and shared by the friends and people I care about.

What makes this experience emotionally rewarding for me is the fact that I can not only be recognized and appreciated for the media that I discover and love amongst my friends and followers, but build influence over them as a tastemaker of great media.

Essentially, it gives us a digital identity to become curators of media amongst a world of people hungry for discovery in such a way that allows us to be the ones who make and break new and emerging artists. 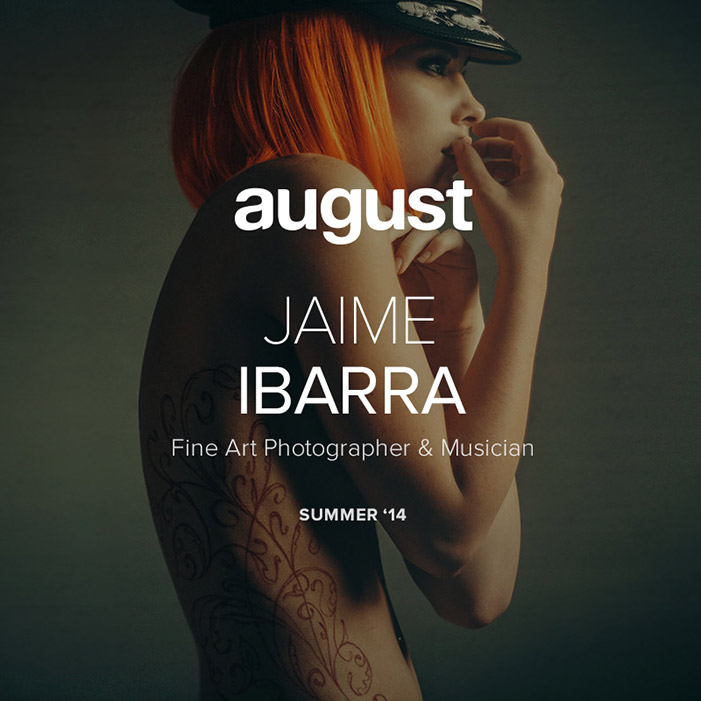 As an artist, this experience solves your biggest and most pressing problem (the problem that comes before monetization): how do I reach the world with my work.

Every artist, no matter who they are or what they create, has to ask themselves this question every time they create something new. 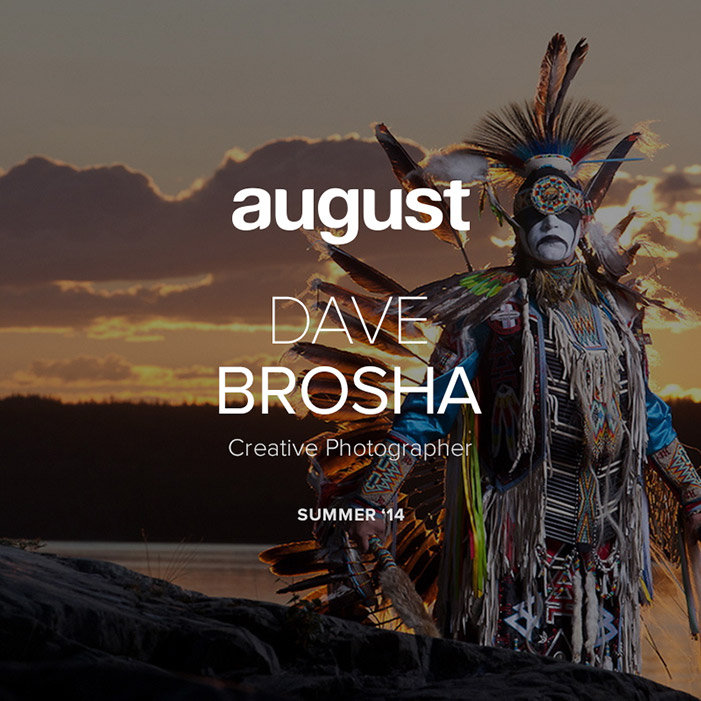 Furthermore, the audiences that you are able to build there lacks any meaningful engagement or relationships, as evidenced by those artists with millions of “followers” and hardly any shares, likes, or comments in comparison.

As an artist, you thrive upon your ability to build and cultivate meaningful and sustainable relationships with your audience.

This just doesn’t happen on the current array of social networks because they are not built for artists or their work, but for consumers consuming media created by others consumers. 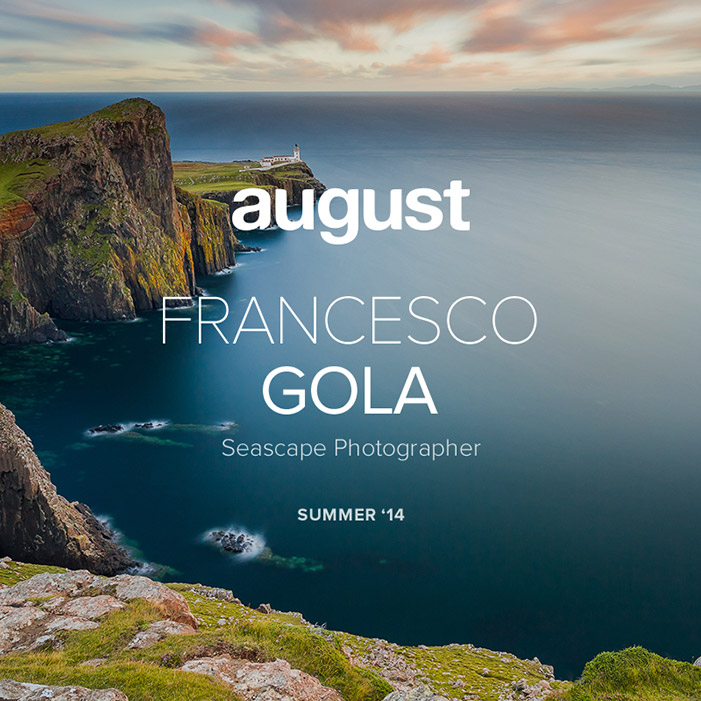 And on top of that, the people on those networks are not there with the mindset, focus, or desire to discover media from artists like yourself because at this point, that desire lacks any home or success.

August solves this problem by giving you as an artist the ability to distribute your work to a global audience of consumers that are focused purely and solely on discovering it.

Since this distribution, and the publishing methods and channels that compose it, are exclusive to artists through an invite-only system, your ability to reach this consumer audience within a socially engaging experience can realistically occur.

What kind of artists can sign up for August?

Any artist can sign up for August whose work can be published within the digital mediums of audio, video, imagery, and text.

Thank you, Sean, for the interview!

In my opinion August has a lot of potential because it is something that just simply hasn’t been there. What do you think about August? Does it have the potential to become a huge network for artists? Leave your thoughts in the comments.

Samyang to Announce New 50mm f/1.5 for MFT At Photokina