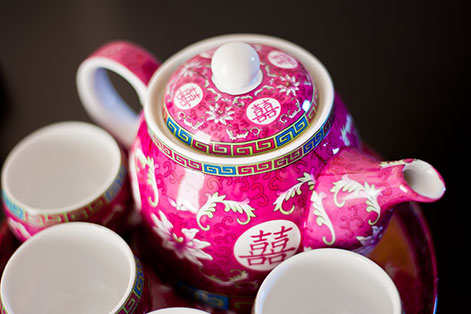 In our last shooting guide, we covered the basics of aperture, how to read the f-stop numbers, what a lens speed is, and how the aperture affects exposure. In this article, we will talk about what aperture is primarily used for in photography, which is to control depth of field (DOF). Depth of field is the front-to-back zone in a photograph where objects appear acceptably sharp.

In front and behind this area, objects begin to lose focus faster and faster the farther away they are from this area of focus. When we talk about the main characteristics of depth of field, we usually classify it into two categories, shallow depth of field and deep depth of field.

Shallow or Small Depth of Field

When the aperture is large (ex. f/1.8), the area in front and behind the focus point is very slim or shallow. That means that objects right in front and right behind the plane of focus is already going out of focus. As you can see in this photo below, the flower arrangement in the foreground is in focus, but the flower arrangement in the rear quickly falls out of focus, and the background is well beyond the area of focus. 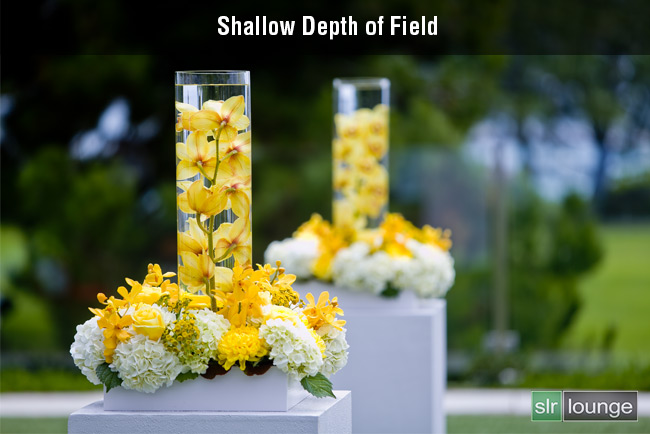 Shallow depth of field is used primarily to isolate the subject from its environment, and it is used a lot in portrait work, macro photography, and sports photography.

Deep or Large Depth of Field

When the aperture is small (ex. f/16), the image has a deep or large depth of field. This means that the focus range covers a large area front-to-back, from several yards in front of the focus plane to nearly infinity behind it. In this cityscape image, both the apartment buildings in the foreground and the skyscrapers in the horizon are both in focus. 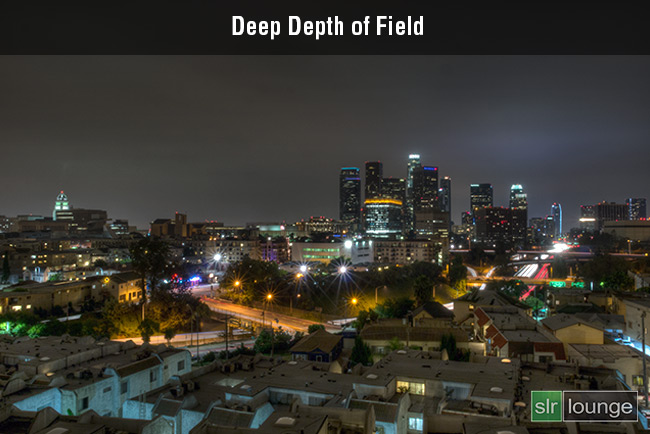 Large depth of field is most often associated with landscape photography, but you can also see it in architectural photography. It is also known as the storytelling DOF because you can have multiple visual storylines or characters at various points of the photo. The cityscape above captures the quiet apartments on the hills of Chinatown just outside the crowded business district of Downtown Los Angeles.

What influences Depth of Field?

There are four factors that affect depth of field: aperture, distance between you and the subject, focal length, and the sensor size. Aperture is the easiest way to control depth of field, while sensor size is the only factor you cannot change unless you switch your camera body.

Aperture: The easiest and most controllable way to manipulate depth of field is with the aperture, as we’ve briefly covered so far. Lenses with a large maximum aperture, like an Olympus 75mm f/1.8 give you more options in how shallow you want your DOF to be. Prime lenses like that 75mm usually have a larger maximum aperture than zoom lenses. On the opposite end, the majority of lenses have a minimum aperture between f/16 to f/22. 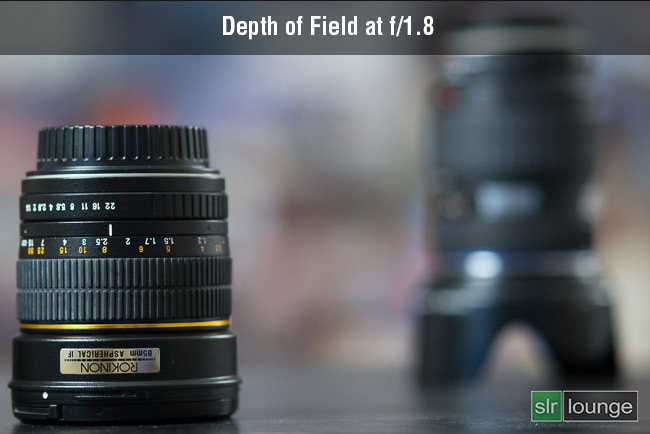 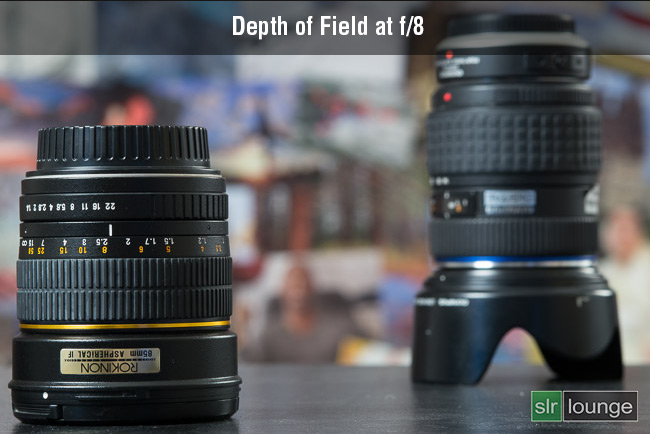 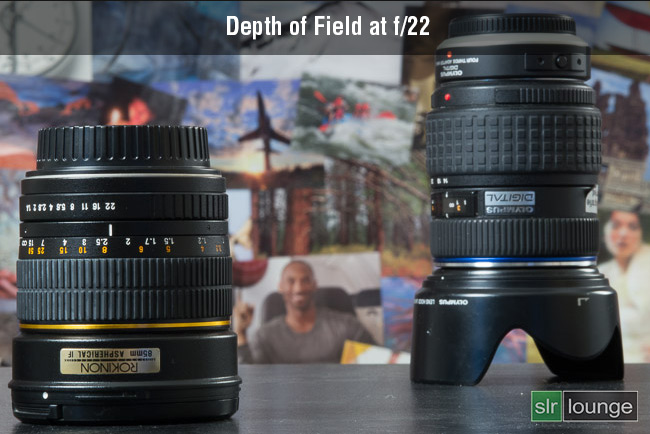 Distance between you and the subject: The closer the focused subject is to your camera, the more you throw the background element behind that subject out of focus. If you then change the focus to a subject that is further away from the camera, more of the area in front and behind that subject will be in focus even if you did not change the aperture or any other setting.

In the image below, the appetizer that is in focus is only a couple of feet away from the camera, so the depth of field is shallow and everything an inch in front and behind the appetizer is already out of focus. 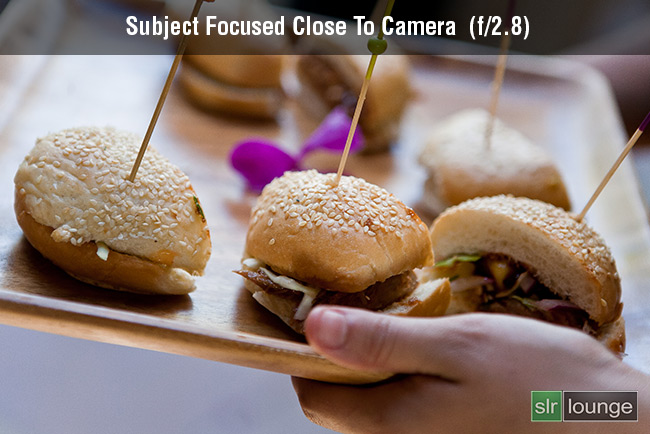 The closer your camera is to the subject, the slimmer the plane of focus. You can see this pronounced effect in jewelry photography and macro photography.

On the other hand, the bride and groom that are the focused subjects in this image are far away from the camera. As a result, even at a wide aperture of f/2.8, the altar and the first 4-5 rows of audience are still sharp. 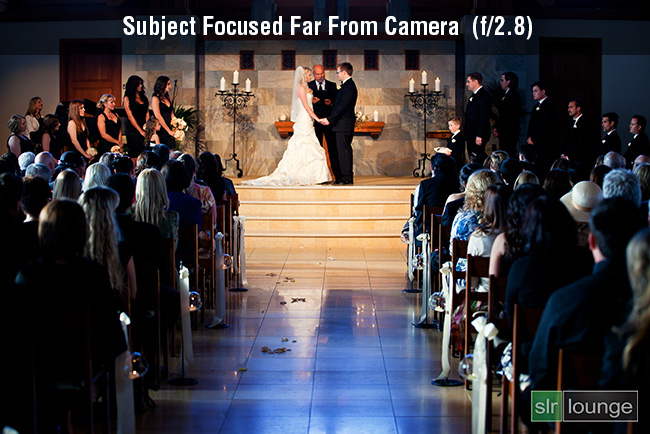 Focal length: The focal length of a lens also affects how much of the scene is in focus. When the focal length is short, like a Canon Super Wide Angle EF 14mm f/2.8L II USM Lens, the DOF will be greater. This is good if you have to shoot interior architecture and want to make sure everything is in focus.

If you use a longer lens with a focal length a 100mm like the Canon EF 100mm f/2.8L Macro IS USM Lens, you will have an easier time isolating your subject in focus and knocking the background out of focus. This is part of the reason why 85mm-150mm are great lenses for portraits. You will get that nice creamy background while the subject’s eyes are in focus. 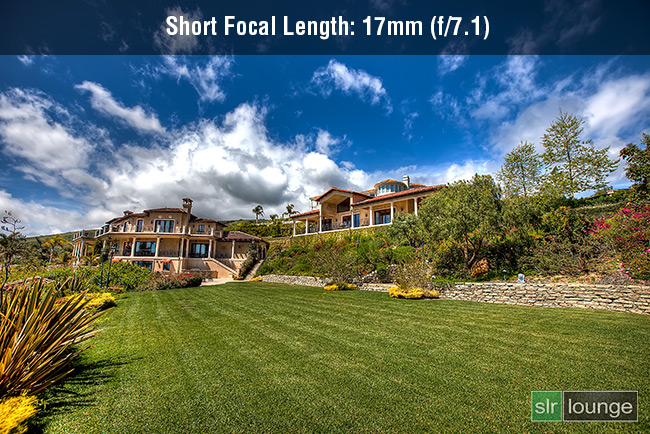 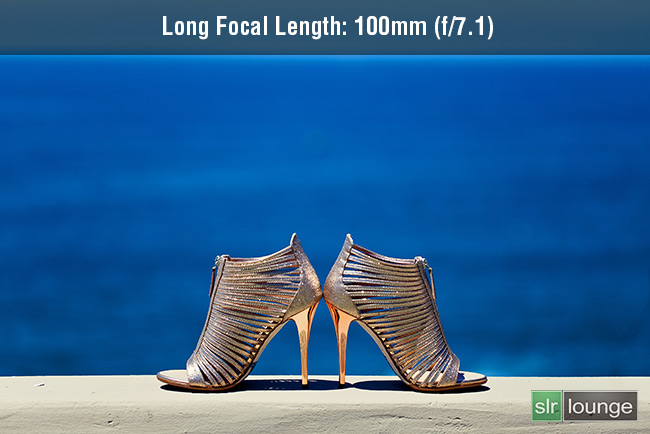 Sensor Size: Finally, the size of the sensor also plays a part in how deep of a DOF you can get – the smaller the sensor, the larger the DOF, and the larger the sensor, the shallower the DOF. This is one of the reasons why you cannot get the shallow DOF look from a point-n-shoot camera – the sensor is simply far too small. Full-frame (FF) or 35mm DSLR has been the standard when it comes to creating the lovely shallow DOF look, which is why they are often the preferred choice for professional photographers.

The Micro 4/3 (mu43) camera system like the Olympus OM-D has a sensor that is larger than a point-n-shoot camera sensor, but smaller than a full-frame DSLR sensor. You can still get shallow DOF with a mu43 camera when it is paired with lenses that have an aperture of f/1.8 or faster. But if you were to shoot an image with a mu43 camera and a full-frame DSLR at the same aperture, the mu43 photo will show a greater DOF than the FF DSLR.

The image below was shot with another mu43 camera, the Panasonic GH2. At f/7.1, the model is already completely in focus from her front arm to her back arm. 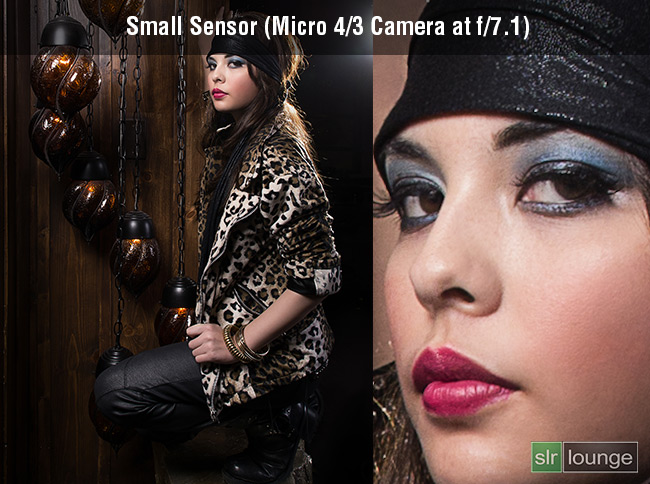 A medium format camera like the Pentax 645D, on the other hand, has a much larger sensor than a full-frame DSLR, and so even at f/11, the model‘s hand is still out of focus. If you were to shoot this with a full-frame DSLR, her hands would be in focus along with her face. 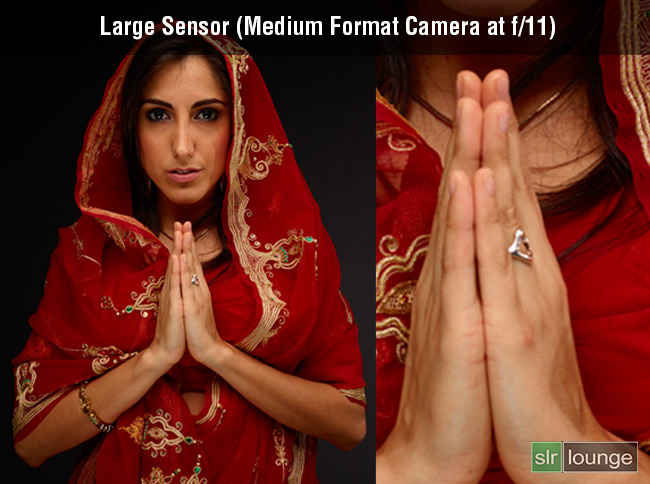 So to review, here is a chart that shows you how each of the factors that we talked about affect depth of field. 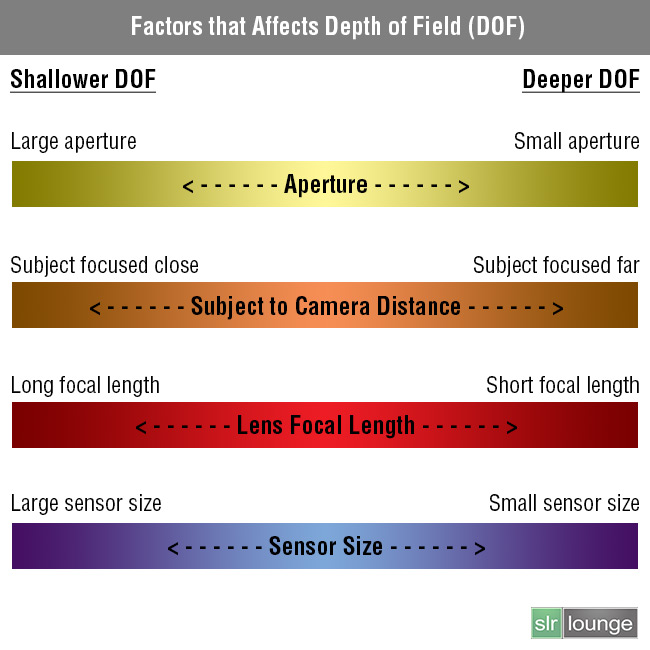 Aperture plays an important part in manipulating the depth of field in your images. It is the easiest way to change your DOF, but it is not the only way. Along with a large aperture, you can create a shallow DOF by having your subject closer to your camera, using a lens with a longer focal length, and by using a camera with a larger sensor. If you want to have a deeper DOF, you can stop down to a smaller aperture, focus on a subject farther away from the camera, use a shorter lens, or switch to a camera with a smaller sensor.

28 Megapixel Photos with the iPhone 5?