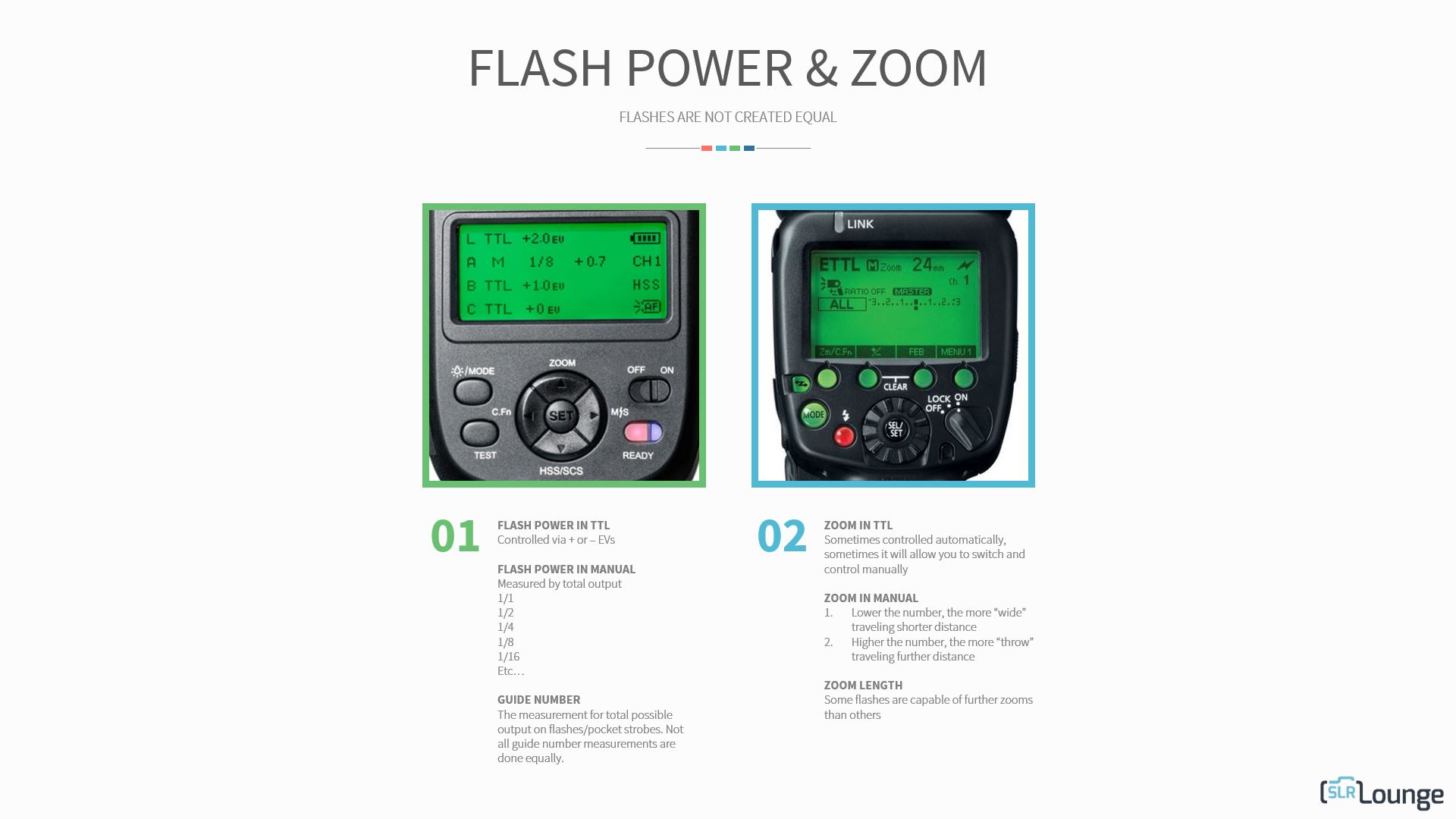 Up until this point we talked several times about adjusting your flash power, using your zoom and so forth, but we’ve never actually showed you how to do it. I want to talk about that in this video. We’re going to show you how to do it, the basic adjustments. I also want to show you that not all flashes are created equal when it comes to not only the power setting but also zoom functionality. Let’s go ahead and get started. Now first let’s talk about the actual adjustments of flash power. When we are in TTL mode we’re going to control … When we’re basically allowing the camera or allowing the flash to decide what the flash power should be we’re only adjusting exposure by EVs. We’re basically doing exposure compensations similar to how you would in any of the assisted or automated modes on your camera. You would basically adjust plus 1, minus 1 and so forth. We do that very simply from this menu.

Now over here, this is the back screen of the Phottix Mitros Plus right here. If we wanted to make an adjustment, I’m on E-TTL right now. All I would do is hit set and then simply hit plus or down. It’s going to adjust by 1/3 increments. Again, not a very precise method of adjusting the power and the flash because I don’t know exactly how much power is coming out. I just know that it’s going to be an automated exposure plus one EV, that’s it. When we switch over to manual mode, and you can get to manual mode … On this flash right here I can just hit mode, and it’s going to take me into manual or multi. Multi is that hertz mode that we were talking about where you can get multiple fires off in whatever shutter duration or whatever speed you want. Again, not used frequently, but we will talk about it a little bit more later on.

It’s very simple to make these exposure adjustments when we know exactly what the flash power is doing, what flash power we’re using. Now this is the 600 EX-RT. You can see basically the differences. Like I said earlier, I prefer the 600 EX-RT. If you have it in the budget then this is the flash I would get for Canon users. If you’re a Nikon or Canon, and you’re looking to save a little bit of expense, of if you’re just a Nikon, you want a full feature flash I’d recommend the Mitros plus. You can see a little bit more refinement in just the overall layout, and the functionality and in the UI of this menu system over this guy. Really both these flashes have almost identical features. Either way we get there the same way. On this one I’m just going to simply … I think I can just adjust by hitting set and then dialing this thing up or down. Let’s just try this right now. I actually have a button right there for plus/minus. All I’m going to do is just dial to the right or to the left. That’s how I would adjust my exposure value when I’m in E-TTL mode.

How do I switch it? I have a mode button right here. Again, hitting mode will take me to manual. In general it’s going to be this exact same way across different flashes. You’re just going to hit the mode button to switch modes. You’re going to find out which buttons you need to press or which dials you need to turn to go up in power, or down in power, or up in EVs or down in EVs. If we haven’t covered the actual flash unit that you’re using, just take a quick look at your manual. Most flashes are pretty intuitive, so just by playing around with it you can get it pretty simply. One thing I want to mention is the guide number. How do you know exactly how much total output a flash is capable of? For example, if I buy a Phottix, versus a Neewer versus any other flash, a $70 flash versus a $300 flash, 1/1 on a $300 flash is that going to be equivalent to 1/1 or full power on a $70 flash? This is where the guide number comes into play. Now a guide number is basically a number that the factory will give you that tells you the overall power of that flash unit.

A typical guide number is around 60, but here’s the crazy part. Guide numbers, just know that the higher the number the more power you get. The lower the number, the less power. The problem is that not every manufacturer measures it the exact same way. Some of them use different distances. Some of them use different exposure settings and so forth. It’s not exactly the most reliable way to understand which unit provides more power. Here’s the thing. We did our own testing, and what we found is between the pocket strobes most common pocket strobes especially the ones we’re using here whether they’re manual or whether they are full-featured strobes are generally all around the same power setting. They all put out around that same power setting when they’re at 1/1 power. There’s not going to be a huge difference there, but just know that not all flashes are created equal. You definitely want to check and look online preferably not at a manufacture website because unless they’re using the exact measurements you won’t know. You can look online at different forums and so forth and see what other people are measuring from those flash units to see what the guide numbers are.

Let’s go over to zoom. Zoom similarly to power is not equal across all flashes. Some flashes have different zoom capabilities. Others have more, some have less. For example, most flashes, and I think, let’s see what the Phottix does here. With the Phottix I can actually adjust. I’m going to flip this over to manual zoom. Then I’m going to see what my zoom can actually go up to. My zoom on this guy can go up to 105mm. What is the zoom doing? At 24mm, basically my flash spread is going to be fairly wide. When I zoom it up every step up to 35, 50, 70, 80, 105mm, basically what’s happening is that internal flash unit … You can hear it on an electronic one like this. The flash unit is being pulled back inside the body. What’s happening is that it’s funneling or pinning the light a little bit more. It’s zooming in the light. That way the light travels a further distance and in a tighter spread. When it’s zoomed wide at 24mm it’s going to fan out in a wide direction.

If you’re shooting a big group of people, and you’re standing fairly close you want a wide zoom on the flash because you want it to spread out and cover everybody. That’s if you’re using direct flash, but if you’re trying to hit a certain point, if you’re trying to fire a long distance, or if you’re trying to get it just on a reflector that might be pointed off to the side, and you don’t want it to spill. You might want to zoom in on the way. Again, for this Phottix my zoom, this Mitros Plus goes up to 105mm, but on the Canon, the EX-RT, this will actually give me … This is the 600 EX-RT. This will actually get me up to 200mm in zoom. Again, zoom functionality can differ between units. With other types of flash units like my Vivitar, which is so fugly, I don’t even show it, this tank doesn’t even have any electronic controls. How do I control the zoom? It’s this lovely elegant telescoping design here. I don’t even have really any settings for it other than it just says wide, normal or tele. It’s just 3 different settings that I pull out.

Again, very limited functionality, but I have the same controls here as I would as far as this. It’s just manual control. It probably doesn’t have as much zoom and everything. I control the power actually manually as well just via this little turn thing here. This flash was designed in the 70s, and when they did the rerelease they didn’t change a thing. It still looks like it’s from the 70s. Let’s hide this ugly monster back in here. In summary, just remember that with power when you’re in a TTL mode you’re adjusting your exposure based on flash compensation. It’s going to be plus or minus in EVs like you see here. When you’re in manual mode you’re adjusting via total flash output in a fraction, so 1/1 is full power, 1/2 is half power, 1/4 and so forth. When you are using your zoom just remember that the lower the number, similar to a lens, the wider the angle. If you’re at 24mm it’s going to have a very wide spread on that flash. As you zoom it in it has a tighter spread, which is great when you’re shooting, and you need to get that flash either further in distance, or you need to put it somewhere like onto a reflector or modifier, so you can shape the light however you want it.