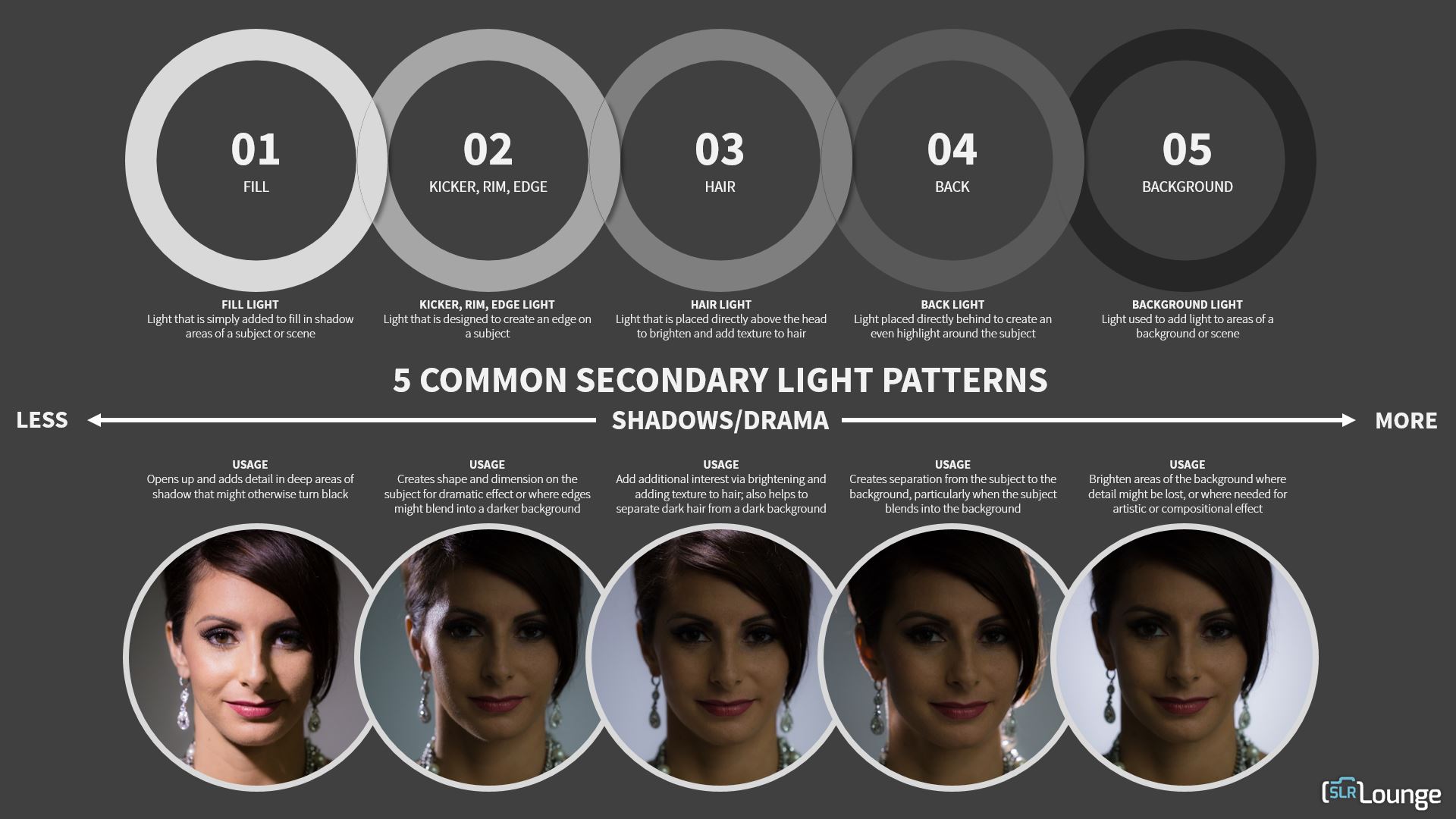 Now, we’ve talked about our key light patterns, which is that primary light, this is when we are dealing with basically a second or a third light. I know many of you are probably think, “Pye, this is Lighting 101. We are only dealing with one light and it is just going to be on camera light.” Ah, but au contraire mon frere because we are going to be dealing with more than one light.

When you guys approach a scene, more often than not, if you are shooting outdoors, you already have lights outdoors. We want you to be able to see that light. We want you to be able to position your subjects so have a backlight, a hair light, a kicker. We are going to use that existing light and then add one single additional light, and what is going to happen is you are going to find that with just one single light, you can set up a scene with maybe one light and a reflector that it looks like you have four or five lights in a scene, but really, you are just using your on-camera flash. It is all about seeing what is actually there and simply adding to it.

Let’s first talk about … Before we get into all that craziness … Our common secondary key light patterns. For this, I need Anita, once again. Anita.

If Anita had a voice, well I don’t actually know what it would sound like. She looks young. It would be a young voice.

Now, let’s go ahead and use my little Litepanel Croma. I’m going to turn this guy on. I’m actually going to leave this on this blue daylight white balance just so you guys can see exactly where the light is in relation to this key light on her face. You can see in this example that if the shadows on this side, which it is in actually our example too because the light is coming from that side, then the fill would be on this side. Now, depending on the brightness of that fill is going to depend on how much of the shadow you are leaving versus how much of the shadow you are opening up. The more shadow you open up, the less dramatic. The less shadow you open up, the more dramatic.

Now, going into the second one, we have a rim, a kicker or, what do we call it? A kicker, rim, or edge light. It is actually three different words for the exact same thing. Okay, so I like to call it a kicker because I think it is the coolest of those terms. I don’t know. It kind of sounds cool. A kicker simply comes on to your subject from an angle and from the back. It kind of creates that rim or that edge light. Hence, rim, edge, kicker, whatever you want to call it. Basically, you can see in our little example of Olivia, it just comes and kind of gives the back of the face a little kiss. It kind of hits the neck. It will hit the shoulders and it creates that edge light. This is a great light for creating dimension to the face.

Now, granted if you are shooting a beauty type shot, it is really not the best type of light to add. But for say, dramatic athletic portraits or for any type of dramatic shot that you want to have, a kicker is absolutely fantastic. It adds a lot of dimension and depth to the face.

Let’s go ahead and show you where that light position would be in relation to Anita. Now, common errors with the kicker. Placing it too far to one side, ends up splashing onto her face and you can see that right there. Placing it too far back and it is no longer a kicker. It is just hitting the back of her head. You have got to kind of get it at an angle and slide it to the back and you want to just adjust that position so you are not getting too much light here. You want to adjust the power too because typically you want it to be more on the subtle side. Again, don’t mind the power here. I’m leaving the power fairly high just so that you guys can see where the light is hitting but that is the position in relation to the subject.

Now, let’s go on to our third one. This is the hair light. A lot of people actually confuse the hair light with a back light. They are actually not the same thing. The hair light is simply a light that is placed directly over the hair. Again, a common mistake with the hair light is to place it too far forward and look what happens. It splashes on to her face and it adds a really kind of nasty light where we get these shadows, deep shadows underneath the eyes and so forth, and underneath the brows. It is not good.

Next, we have the backlight. The backlight would come directly behind the subject. This is where it gets confusing with a hair light because it kind of lights up the hair as well. A backlight is placed directly behind the subject’s head and it is just going to brighten up and create kind of a back light on her edge, around the entire body. Sometimes people call this a rim light too. It really doesn’t matter, guys. So long as you know what these things are doing that is the main thing. It basically adds this little light rim around the edge of a subject, which is again, fantastic for separating a subject from a dark background. If they’re wearing a dark suit and you are shooting them against a dark background, then adding a very subtle back light will help to separate them from the background.

The one that kind of comes to mind … Actually, there are several that come to my mind … Anytime we are shooting a subject over like a sunset, what I often like to do is actually place my subject just directly in front of that sunset. What ends up happening is the sunset kind of creates a sort of background light for the subject because it essentially has this halo or this kind of brighter area right around the subject. That light behind whoever you’re shooting will add a lot of attention and draw in attention to that person. That is a way that you can kind of find natural existing light and use it similarly to a background light in a studio. Background light in a studio will come into play when we get into Lighting 201 and 301, as we create more advanced 2, 3, 4-light setups, and so forth.

All right. That’s it for our common secondary light patterns. Now, as we are going through and we are talking about each of these scenes and trying to recognize what we have in these scenes, we can describe them with the proper terms.

One thing you guys might be thinking is, “Well Pye, this is Lighting 101. We are talking about secondary light patterns, which means that we would need a second light but we only have an on-camera flash.” This is the thing. With all of these lights, we can find every type of light here, pre-existing in a scene. We simply have to look for it. We have to position our subject in the scene accordingly and then add flash … Add our on-camera flash with a modifier to it … We can create 2, 3-light setups with simply one on-camera flash.

This is how we are going to create all the different shots that look dynamic. It looks like they have hair lights, rim lights, edge lights, kickers, and so forth. In reality, all we are doing is positioning the subject in a scene that already has existing light. Being very kind of just aware of that existing light and then adding our own to complement it.