Take the Minimalist Challenge with a One Lens Portrait Session

Video: Take the Minimalist Challenge with a One Lens Portrait Session

In this article/video, we’re doing a minimalist challenge. This is something that I like to do with my workshop students, and it’s as simple as this: Limit your gear to one lens and one camera body for an entire portrait session. The actual gear you choose doesn’t really matter. For my take on the challenge, I’m going to use a 35mm f/2 lens with an EF to RF adapter on a Canon EOS R camera body. If you wanted, you could even do this with an iPhone, just like we did for our entire Creative Photography 101 workshop.

The other part of this challenge involves time of day, which has to be midday. Under the midday sun, you’ll have to deal with hard sunlight and work with whatever angles or backgrounds you can find at your location, which in my case is my neighborhood. It also helps if you have somebody to photograph, like our subject for the day, Chloe, whom you can find on Instagram (@chloechaerinlee).

Why Take The Minimalist Challenge?

The entire purpose of this exercise is this: I often see photographers bring tons of gear to a shoot, including flashes, a tripod, and all the lenses they own. When we bring all of our gear like that, we tend to feel like we have to actually use it. Unfortunately, what ends up happening is we do things like using flash in a scene where the lighting is already beautiful. We miss opportunities to shoot in amazing natural light because we feel like we have to use the flash that we brought.

The minimalist challenge is about getting back to the basics. By challenging ourselves in this way, we force ourselves to work within the limitations of the single camera and lens combo that we’ve chosen, using only natural light and available backgrounds at our location. It’s an exercise in creativity.

On-Location Techniques to Help You Master This Challenge

There are a number of techniques you can use to make the most of your lens choice and location, even when all you have is one lens and you’re shooting under midday sun. Try combining these techniques for even better results. I’ll walk you through each of the locations I used and share my process for getting to the final image.

For the first spot, I chose an archway on the porch at my house. We have a nice shape overhead with the arch, but we also have a wall that is bouncing light, which we can use to add a soft, natural fill light onto Chloe.

When posing Chloe, I placed her close to the wall to hide the car that is parked on the street in the background. You might also notice in terms of framing that I actually used the house in the background to provide an additional framing line that leads up to Chloe.

Next, I asked Chloe to sit on the cement so that we could capture another kind of shot. I did this because we would get a nice amount of light bouncing off of the concrete where the sunlight directly hit. Again, I noticed another car in the background, so I used the column of the archway to frame Chloe while also using the black screen on my phone to conceal the van and create a little reflection.

Location #2: Wall and Bushes Along the Sidewalk

The second location is on the sidewalk just across the street from my house. I started by taking a test shot from a straight-on angle, not too wide or close up, and the result was somewhat boring. Instead, I noticed the sun coming directly through the background. I could have placed Chloe against the bush, but there’s no sunlight on that side. I decided to use the bush to create a little more depth as it looks almost infinite, extending out of the frame.

It’s important to be very careful with the framing of your background. I placed the camera at a very low position, shooting upward, so that I could frame Chloe’s head right over the brightest spot in the background, which naturally brings our attention into our subject (see two images below). 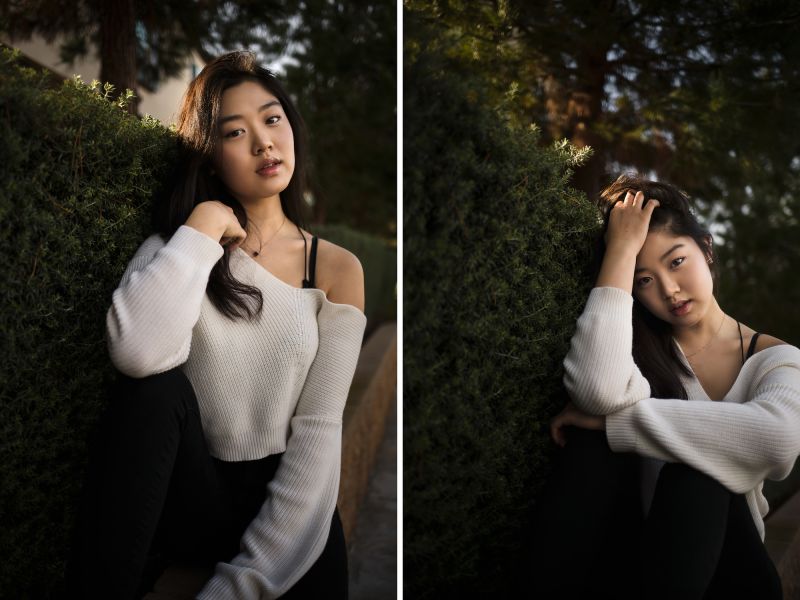 Location #3: In Front of a Tree

For the third location, which is no more than 20 feet from the last spot, I found a beautiful tree. Because it’s winter, we still have some direction to the light, even at midday. For this shot, I wanted to capture the sun coming through the tree and I needed to conceal cars in the background. I chose to shoot this as a closeup, vertical portrait to help limit distracting elements on the sides of the frame. Doing so allowed me to use Chloe to block background elements and transform this ordinary neighborhood location into something that more closely resembles a forest. I simply adjusted my angle to get the right amount of flare from the sun poking through the tree.

After walking around a bit, Chloe and I stumbled into a sort of mini park with a handful of trees that look absolutely fantastic. The location was beautifully backlit by the sun, but the best part was a nearby home that was bouncing a significant amount of light into the area. We started a good distance from the house to demonstrate how impactful the bounced light would be on our portrait. I dialed in my settings and took the initial shot, which left Chloe underexposed. Then, we moved closer to the house. Using my same exposure settings and shooting in the same direction, I captured a second shot, and the difference is clear (see the images below). 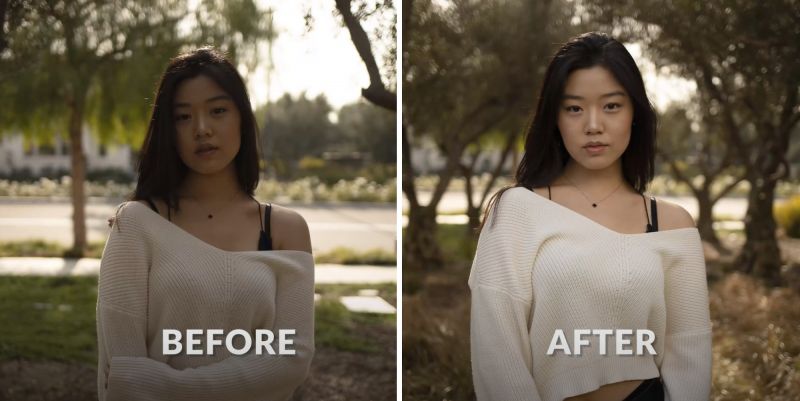 It looks as though we’ve added flash, but it’s all natural light. All we did was move 15-20 feet. That is the power of minimizing your gear and simply getting out to practice.

Now, if we didn’t have such a large reflective surface or any similar options, then we would benefit from adding flash. There’s nothing wrong with using such gear when you need it. All too often, however, we end up making modifications when we don’t actually need to.

Continuing with the shoot, I’m using Chloe to block all of the street signs in the background so that it looks like she’s surrounded by trees.

By dropping lower to the ground and using the grass as a foreground element, I can add more depth to the image and really add to the forest-like look (see the image above). I also made sure to carefully position her in the frame over the sun in the background so that she would really pop out of the shot.

Location #5: Tall Grassy Area Next to a Wall

Another 20 feet from the last spot, we found a nice little patch of grass next to a wall, which I can use to create depth like we did with the bushes earlier. I asked Chloe to sit on a reflector (to avoid getting dirty) next to the wall. I positioned her in a way that allowed me to keep the sun directly behind her, and the tall grass looked great in the frame, too, also backlit by the sun. The same house from the previous location was still close enough to continue acting like a giant reflector.

I used the same exposure settings as before and positioned my camera to block out any junk in the frame, such as passing cars, signs, and so on. Again, getting low here to use the grass in the foreground can help transform the scene by adding depth and blocking unwanted background elements. I even used blades of grass to frame Chloe’s face and create these nice natural flares that lead right into her (see the images below). 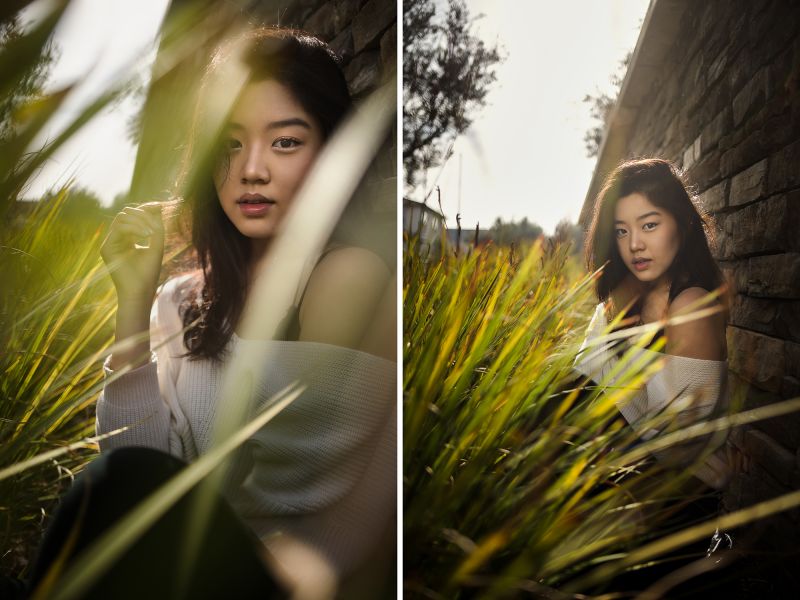 We hope you enjoyed this article/video and took us up on our minimalist challenge. Again, the purpose here is to get back to the basics and stop psyching yourself out on shoots with gear you don’t necessarily (always) need. Instead, slow down, take a look around, and utilize what you have around you. If you’d like some more tips on how to get creative using basic gear, check out our Creative Photography 101 Workshop, in which we used an iPhone to capture all of the featured images. This workshop is available on its own or as part of a Premium subscription.