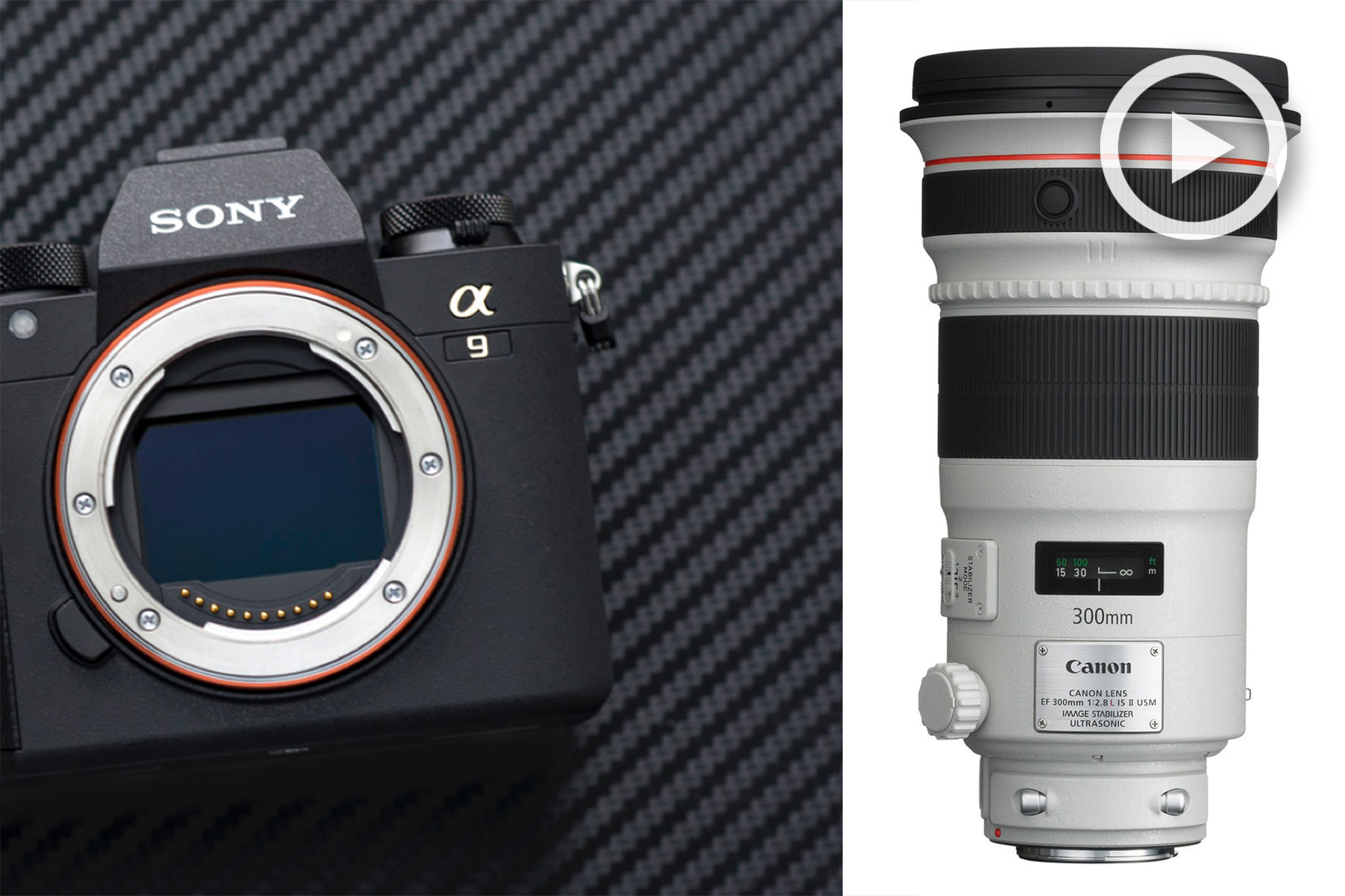 If there’s one primary, recurring, and pervasive criticism when discussing the Sony A9, it is, without question, the Sony E-Mount lens range – how it’s lacking and what that means for the A9. When something as novel as the A9 comes out (and not from Canon or Nikon) it’s sure to rile the critics, but while many critiques of the A9 are out of place, this one carries with it some weight.

Sony has marketed the A9 from the moment of its launch as a sports camera, touting frame rate, AF ability et cetera, and currently the longest focal length to be had with E-mount is 300mm in the form of the not-so-fast FE 70-300mm F4.5-5.6 G OSS. Following soon will come the FE 100-400mm F4.5-5.6 GM OSS (which functions really well) but again we’re looking at slower lenses here. As it stands at the moment of this writing, if it’s reach and speed you seek with an A9 you’ll have to adapt – say, from Canon or A Mount. The stink of it is that we know adapted lens functionality is typically crippled, so the question is how viable an option are adapted long and fast lenses on the A9, and consequently, if you’re a sports shooter should you get it now? A friend, Dan Watson of Learning Cameras, has decided to test just that.

SONY A9 REVIEW / OVERVIEW| THE AFFIRMATION OF MIRRORLESS & WISH FULFILLMENT 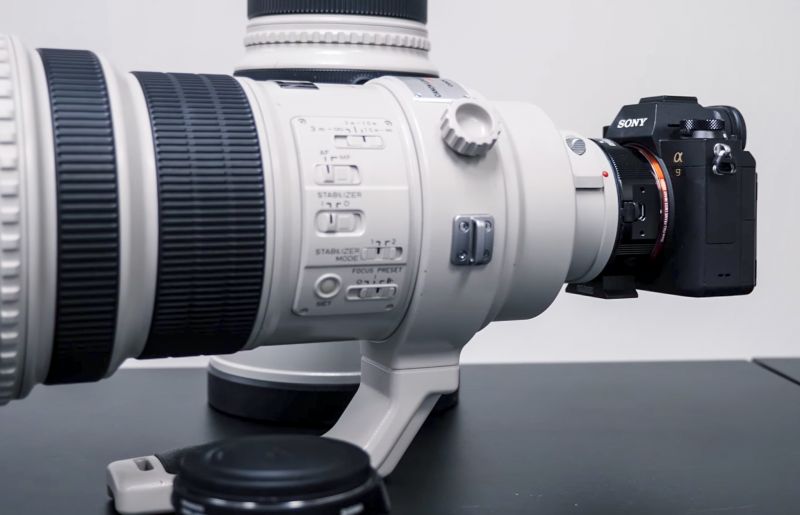 Equipped with a Sigma MC-11 and Metabones Mark IV adapters, Dan pairs the A9 with Canon 400mm F2.8 and Canon 300mm F2.8 lenses to test functionality, and the results were a bit of a mixed bag.

Immediately Dan highlights that your choice of focus modes is limited giving you only Wide, Center, and Single-point Flexible Spot, and your useful focus points seem to be limited to more a center cluster, and not at the extremities as per normal. In addition, adapted lenses in AF-C mode will not track a subject if your burst rate is higher than the Low setting, so you won’t be getting 15 FPS much less the full 20 FPS the camera is capable of achieving. When in Low Mode, however, his demonstration concludes that it tracks just fine.

None of this should really come as a surprise for anyone who has seriously looked at the system for sports or wildlife purposes because there are always concessions to be made when adapting, and Sony has stated these limitations in the literature:

“When a mount adaptor (LA-EA1/LA-EA2/LA-EA3/LA-EA4) and an A-mount lens are attached to the camera, the continuous shooting speed and availability of autofocus tracking varies depending on shooting conditions such as shutter type, focus mode and the attached lens” 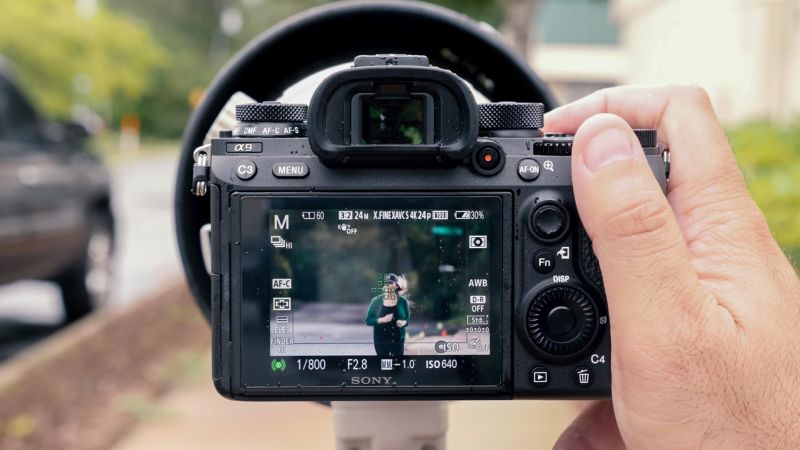 It would be interesting to see now, in comparison, how the behavior would be different using A-Mount long lenses like the Sony 500mm f/4.0 G SSM and Sony 300mm f/2.8 G SSM II using the LA-EA3 adapter. From what can be gleaned from the fine print, both of those should be able to shoot 10 images per second at maximum with AF tracking in AF-C mode. This could be good news for more legacy Sony shooters, and still appears to have better functionality than when paired with Canon lenses.

Dan did a brilliant job clearly and constructively demonstrating the challenges, and of course this has summoned the everyday-critics like the Pied Piper who are essentially dismissing the value of the A9 all-together; even going so far as to say its only real feature of note is the sensor. This is all, in a word, ludicrous.

THE SONY A9 IS ‘GONNA OVERHEAT’ IN 20 MINUTES? PROBABLY NOT

This is a corner self-assigned by Sony, having released the camera the way it did without having a lens roadmap being made public that shows what longer glass is coming and when. That said, the A9 has size, price, FPS, no blackout, AF points covering over 90% of the frame, IBIS, quietness, and far more than I can to type again on its side.

As per the lens deficiency? Sure, but there are two key things to keep in mind when considering invalidating the A9 over a perceived lack of lenses. First, I’d imagine that on top of the 100-400 there will be a long fast prime (then what will the critics say?) en route within a year, and perhaps most importantly, that anyone should resign the A9 to the genre of sports is poor thinking. The value in the A9 is not only realized when shooting sports or wildlife, but pretty much anything – like weddings…

You can find more good stuff from Dan on his site and YouTube channel.