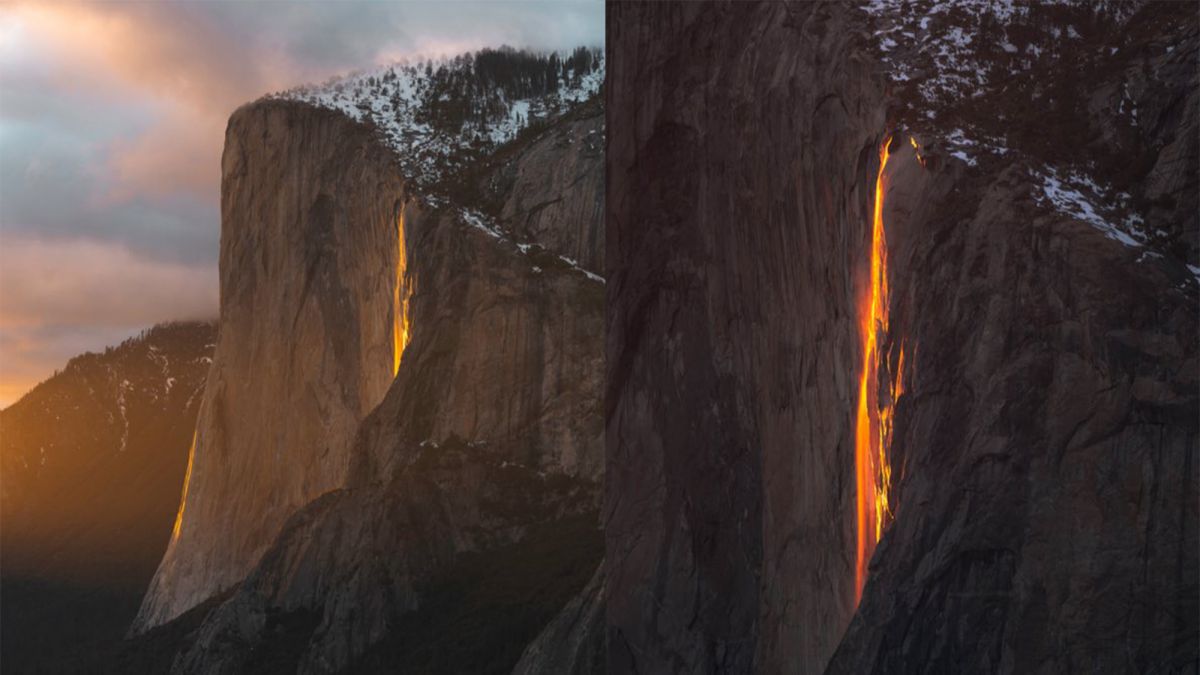 If you’ve ever been to Yosemite National Park, you’ll know that even during the offseason, it’s an incredibly beautiful and photogenic place for any landscape, wildlife, and adventure type photography. But, if you’ve ever managed to be there for its legendary “Fire Falls” you’ll know it’s absolutely magical!

I was actually lucky enough to go there myself back in 2016 and after several days of bad weather and insane crowds, on my last night in the area, the clouds finally broke and we were able to witness one of the most spectacular views in all of California!

Can’t believe I got to see firefall happen. ✨ pic.twitter.com/DF53EIfTk1

Horsetail Falls is a small, yet incredibly iconic waterfall that even with good weather conditions, the “fire-fall” season can be a rare event depending on the year’s rain/snowfall. So getting to see this event in its full glory is incredibly satisfying and worth the adventure. For those who don’t know, the event can only be seen in mid to late February (think around Valentine’s day or later), when the light from the setting sun hits the cliff of the waterfall at just the right angle, making it appear as though it’s burst into flame with a glowing orange/yellow/red glow. Basically, things need to be perfect for it to happen, and given the popularity of this event, can be incredibly hard to even gain entry to the park during this time, let alone actually witness it! Especially since it only lasts for a few minutes as the sun finally sets.

We managed to reach out to Tianna Nguy who was one of the lucky attendees who captured this year’s majestic event and asked her a few questions about her time in the park;

What made you want to go and capture this event?

Being able to see it in person. I tried the previous year, but since there wasn’t any water there was no Firefall event. I wanted to see it at least once in my life and experience the phenomenon! So, I attempted it again and was able to see it twice!

The image I’m most proud of is the one where it’s a wider shot of the waterfall and it’s glowing like its lava. (The one from my tweet) You can also see the beam of light glowing on the side, which makes this phenomenon happen.

What were the days like leading up to this and during the actual event?

I visited Saturday, Feb. 20, and Sunday, Feb. 21. Both days started out as an average day! It wasn’t too crowded as we drove around and walked along the valley, but as soon as it reaches around 2 PM people are already starting to find parking, walk towards the El Capitan picnic area, and set up their gear to capture the event. On Saturday, I ended up hiking up higher to see it above the valley and away from the large crowds. There were thick gray clouds above and as the hour went by I was a bit anxious that it wouldn’t happen, since the clouds loomed over El Capitan for awhile. Suddenly, there was a break at the horizon at the right time for sunset and the show began.

What gear did you use / What’s your go-to kit for an event like this?

I don’t know about you, but I’m incredibly jealous of this year’s capture by Tianna. Have you ever been to Yosemite to capture this rare event? Let us know and share your shots in the comments below. Be sure to visit Tianna’s Twitter, Instagram, and Website to see more of her incredible work.