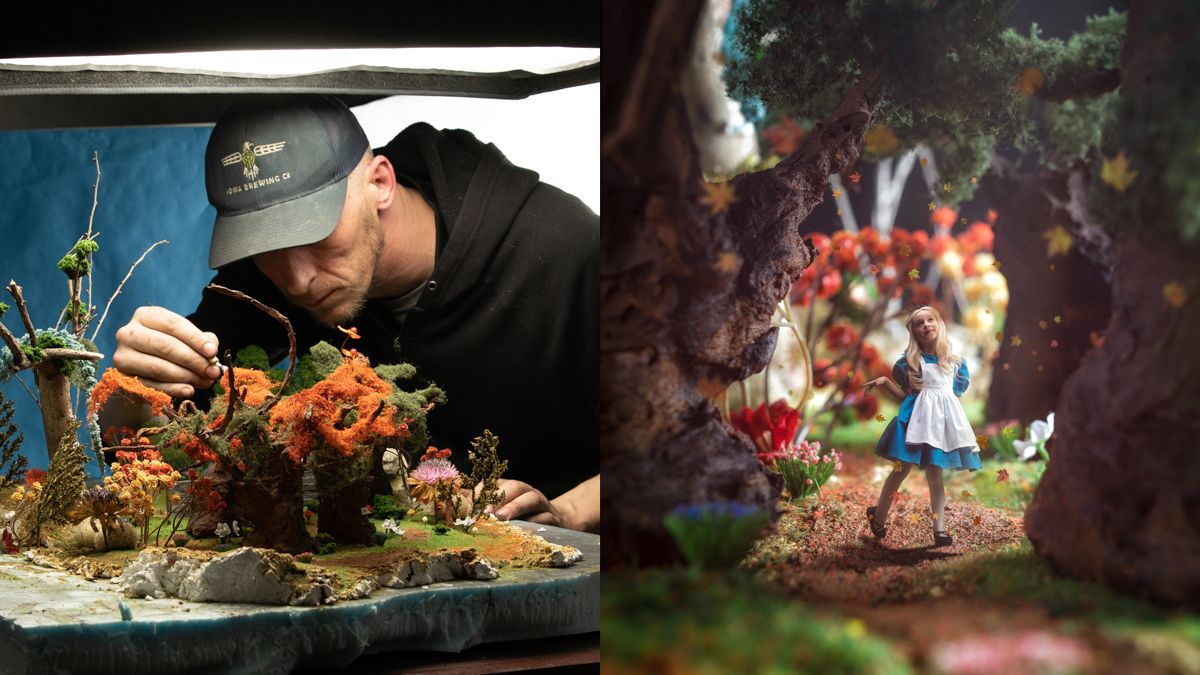 Portrait photographer Nicholas Busch has an unusual method for finding or scouting locations. While many photographers look to Pinterest, Instagram, or their peer’s websites for inspiration and location ideas, Busch turns to cinema. Where he takes it from there, however, is truly unique. Inspired by classic films like The Wizard of Oz, Alice in Wonderland, Mary Poppins, and the Lord of the Rings, Busch has turned his passion for film into a tangible asset for his photography. He now creates elaborate tabletop models, which he uses for backdrops in his portraits.

This  approach to capturing one-of-a-kind portraits was not originally part of Busch’s workflow, but it formed out of necessity during one of his shoots while photographing toys. “I got into model making by accident really,” Busch tells SLR Lounge. “I was doing some toy photography and needed a prop for the scene and couldn’t find it. It was a swing set, so I bought some supplies and attempted to build one on my own. It just slowly went from there on, increasing the scale of my set pieces.”

What started with an attempt to build a small swing set grew into recreations of full-blown landscapes inspired by the films Busch enjoys. “Landscape dioramas really seemed to be my niche and I enjoy those the most.” Because of the quality of his dioramas, a number of Busch’s projects are commissioned by paying clients. According to Busch, “Client work does come in and it is always people reaching out to me. It’s not something I actively reach out to do; however, if the project sounds like a good fit, I will do it.”

After the dioramas are constructed, Busch searches local photography/model Facebook groups for the perfect subject to photograph and include in the final image via a composite in Photoshop.

So, what gear does Busch rely on to capture these composites? “My gear consists of a Canon 5D Mark IV, Sigma 35mm ART lens and Mefoto tripod. For lighting, I use two continuous light softboxes and a Godox AD600PRO studio strobe,” which you can see in part in some of the behind-the-scene images below.

We’re looking forward to seeing more of Busch’s upcoming projects, one of which will involve another cinema classic: “My next big project is going to be Willy Wonka, which hopefully be done by the end of the year.” If you’d like to see how projects like this unfold in more detail, head on over to Busch’s YouTube channel (linked below), which  displays some time lapses and other details of a number of these amazingly detailed works of art.

You can find more of Nicholas’ work via the links below:

All images used with the artist’s permission.

Here's An Amazing Way To Use All Those B-T-S Photos You’ve Got Piled Up.