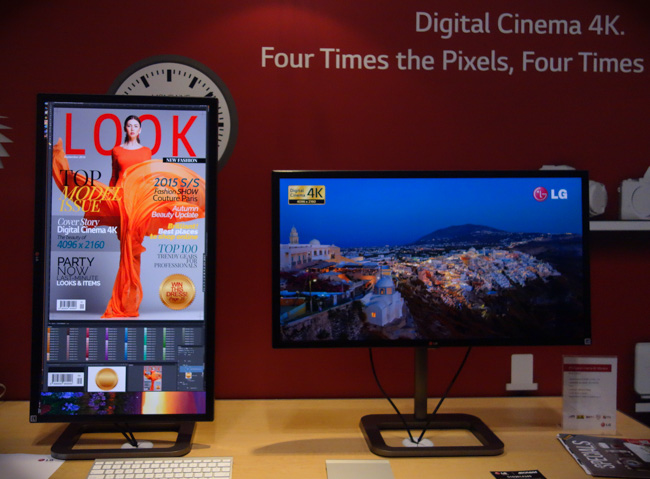 There are certain companies that do certain things better than others. Stating that is always going to be figuratively drawing a line in the sand, but keeping that in mind also helps to identify who is good for what, and hopefully promote those companies to just keep getting better and better at those things, with focus. LG, is a good example. They’ve had a little time out of the spotlight when it comes to monitors for the masses, but they’ve recently released a new IPS monitor yesterday, with you the photographer in mind, and we’ve spent some time with it here at PhotoPlus.

The model number is the 31MU97, which is not something I’d drop into conversation at parties for fear of boring all other guests. That said, that gobbley-gook of a name represents a sleek new cinema 4k IPS monitor with a 17:9 aspect ratio.

Many 4K monitors don’t actually give you 4K. They give you close, but usually a little less, but this monitor actually has a bit more. It’s also got 10-bit color depth which is 64 times richer than 8-bit displays. This means less banding, and more accurate colors. Combine this with Adobe RGB support over 99% means there’s less color loss, and again, more true representation.

[REWIND: What is an IPS Monitor? A Practical Guide to Understanding Display Technology]

Already with just these specs, LG has presented a formidable piece of kit for any photographer and videographer. Going even further, the first thing you notice when looking at this monitor is how strange of a form factor it is. It’s because of the 17:9 aspect ratio. Was it a mistake? Not quite. When we shoot, it’s typically in a 16:9 aspect ratio, and this means when you’re editing, you give up some screen real estate either to sidebars pushing the image in and making it smaller, or covering part of the image. This 17:9 lets you actually have space for that without affecting your image. So you’re not giving up any part of your image. This is absolutely brilliant for a retoucher. Additionally for retouchers is the ability to swivel the monitor to portrait orientation letting you edit that way. 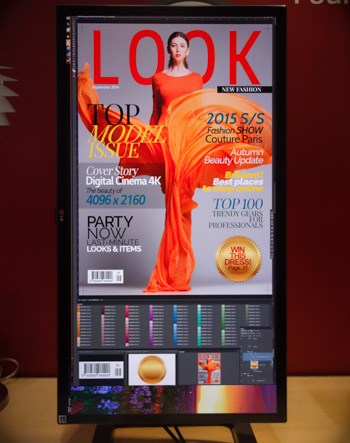 For those even more technically inclined, and videographers, you may be happy to know this monitor only requires one input cable. 4K monitors usually require two cables which means the graphic signal is divided, and then merged at the screen. This can cause distortion and quality loss, neither of which happens in the case of this monitor. As HDMI doesn’t actually support 4K, and only up to about a frequency of 24, you can use Thunderbolt or Displayport to achieve the required higher frequencies of 50 or 60, etc.

All in all, it’s extremely cool, and in person, it’s slim, and easy on the eyes. Sitting at $1399 it’s not at the lower end of the spectrum, but may just be ticket for those of you looking for a powerhouse. Find out more about it here.

**We’d like to give a special thanks to B&H for making this trip possible, allowing us to bring you the freshest and best from PhotoPlus 2014.**

The First Amendment: What Photographers Need to Know (And What To Do If You Are Arrested)