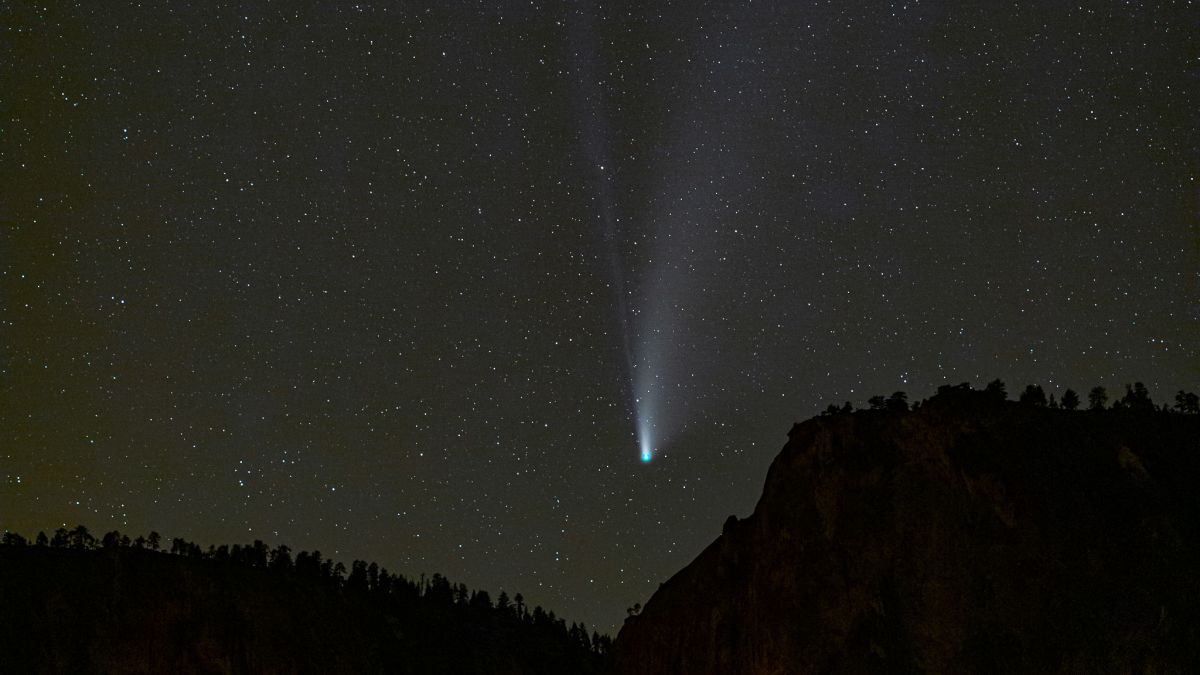 How To See Comet NEOWISE! | A Step-By-Step Astronomy Guide

If you’re at all into astronomy or nightscape photography, then you’ve probably heard (and seen) by now, there’s a new comet in our night sky! It will only be visible for a short while longer, however, so if you want to see a once-in-a-lifetime opportunity, grab a big heavy tripod, your camera, and a good low-light lens, and head out somewhere…as far away from “civilization” as possible!

First, here is our step-by-step guide to making sure you get the shot. You’ll need to make sure there are clear skies, of course, and you’ll want to avoid light pollution as much as possible. Last, but most importantly, you’ll want to know exactly where to look in the night sky to see the comet! (Hint: It may not be visible to the naked eye at first, but if you point your camera in the right direction and take a good nightscape/astrophotography exposure, you’ll see it!)

Comet NEOWISE got its name from its discoverer, the Near-Earth Object Wide-field Infrared Survey Explorer, a NASA project (satellite) that is currently dedicated to finding and observing near-earth objects, as its name implies.

NEOWISE was first discovered on March 27th of this year, and it raced towards our sun, reaching its closest point to our nearest star on July 3rd. (It got closer to the sun than the planet Mercury’s average distance!)

Many “new” comets self-destruct when they pass close to a star, however, NEOWISE, apparently ~5km across at its nucleus, was more than substantial enough to survive its close pass and became very bright and visible to the naked eye shortly after passing around the sun and heading back past Earth.

The comet will be the closest to Earth on July 23rd, 2020, at a “mere” 64 million miles (103 million km away. However, it will likely be gradually dimming as it gets further away from the sun. If you’re willing to stay up late, though, and get away from the city lights, it should be visible to the human eye after sunset, in the Northeastern sky, until about midnight (from our approximate position in California, that is) on the 23rd.

After that, it won’t be back for 6,800 years! So, quite literally, now is your ONLY chance.

After being inspired by numerous photos on Instagram, (people tag me in their photos randomly, because my username is AstroLandscapes) …I wanted to see the comet for myself. Unfortunately, I’ve been too busy to sneak away to escape the worst of the local Southern California light pollution, to a spot like Joshua Tree National Park, for example, and it has been often very overcast along the coast in Orange County where there are at least a few hills which could allow a small escape from the severe light pollution.

Last night, however, I saw clear skies in the forecast, and a potential alignment for the perfect framing of one of my favorite local seascape icons, so I grabbed my camera gear and went for it!

How To Find Clear Skies

The easiest way to make sure you aren’t “skunked” by clouds is, of course, to simply check the weather! Indeed, there are tons of apps available that can help you do this, but as a landscape and nightscape photographer, I have found a couple that are the most helpful for not just predicting perfectly clear skies, but also things like predicting the perfect sunset!

The first app I always check is called MeteoBlue, it is unique because it gathers forecasts from as many different actual meteorological (weather) stations as possible, and presents them all to you. In addition to that, it actually shows a very useful graphic of cloud cover and elevation, so, for example, you can predict if there will be low-lying fog, or high-altitude clouds. (The latter of which are what often make for epic sunsets and sunrises, by the way!) 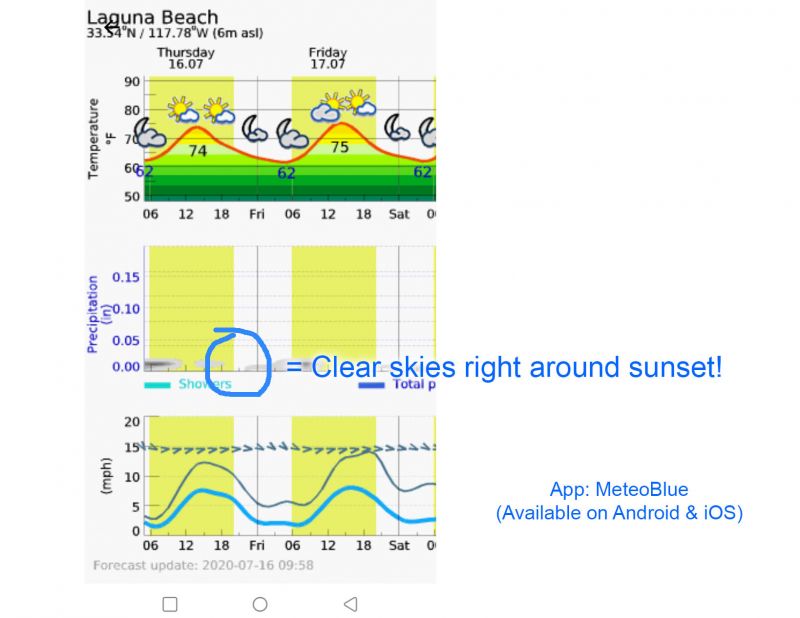 The “Meteograms” section is what you want to look closely at. In the above graphic, you can see day and night represented by yellow and white columns, and the grey blobs are, of course, clouds at various altitudes. (Rain is also represented on the same graphic, but there was no rain in the forecast, of course)

In this case, (see above) it looked like there would only be a little cloud cover, and it would miraculously disappear a little before sunset, and not return until well after sunset. Thankfully, that was my exact window of opportunity to see the comet!

Another app you can use to keep an eye on nearby clouds is Windy App, an app also available for both Android and iOS. There is a Windy Map option that shows you not just wind, but cloud cover in both satellite and radar form, which is useful for making sure there isn’t a large cloud bank sneaking up on you at night…

How To Find Dark Skies

Making sure there is clear weather is easy, but what about avoiding light pollution? Actually, it’s almost as easy as checking the weather, and it’s a lot more reliable/consistent, too! 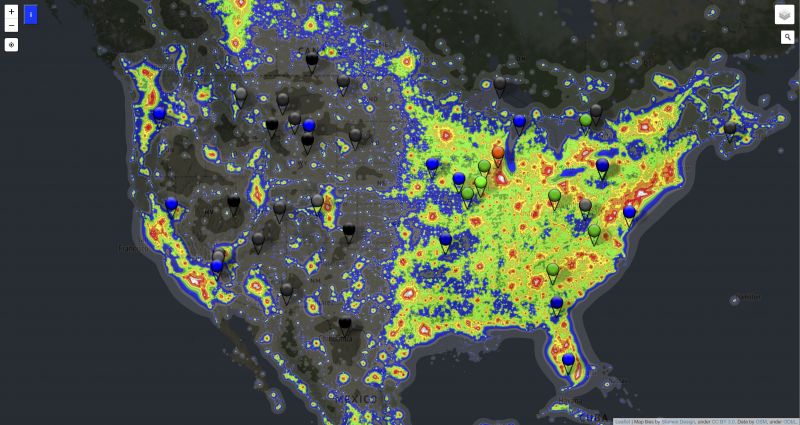 Finding dark skies can be as easy as getting outside a major city, and indeed, even if you’re stuck in suburbia with lots of light pollution around, you can still see the comet as long as you’re just a little distance away from the nearest, worst bright lights.

However, if you’d like to find TRULY dark skies, where there is almost zero light pollution around, (especially since NEOWISE will be near the horizon a lot of the time!) …then you should use a tool that shows you where to go to escape the light pollution.

The best tool for this is the Darksitefinder website map, which shows light pollution as being shades of grey in optimal, extremely dark places, and then blue/green/yellow/orange/red colors for areas that have progressively worse light pollution, respectively, with “white-hot” being the worst light pollution zones in which you are unlikely to see any stars at all. 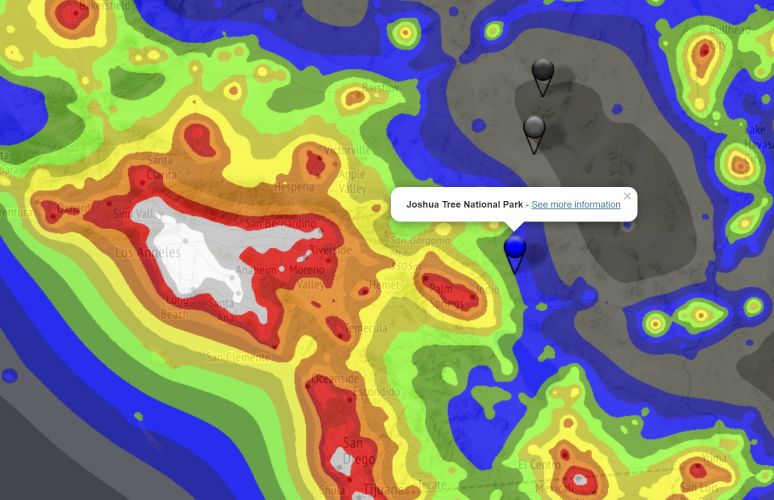 If you can’t “escape” to a truly dark grey zone on your home area’s map, however, don’t worry! NEOWISE is still visible with a telephoto lens, binoculars, or telescope, even if you are within a blue, green or yellow area.

How To Find Comet NEOWISE

Last, the trickiest, most intimidating part of the equation is knowing where to look in the night sky. Since the comet won’t be visible to the naked eye unless you know exactly where to look, or are in extremely dark areas, knowing the exact position of the comet itself is essential. (It also helps you think of creative nightscape compositions, of course!)

There are many apps for finding constellations, planets, and stars, and some of them may not have been updated to include comet NEOWISE. A few of them have, such as Stellarium, which is one app I never leave home without!

For scouting a photo-op before leaving home, I prefer the desktop tool found on TheSkyLive, a website that has dedicated tools for predicting exact positions of all celestial bodies either right at the moment for where you are, or days/weeks etc. in advance, for another location you wish to visit. 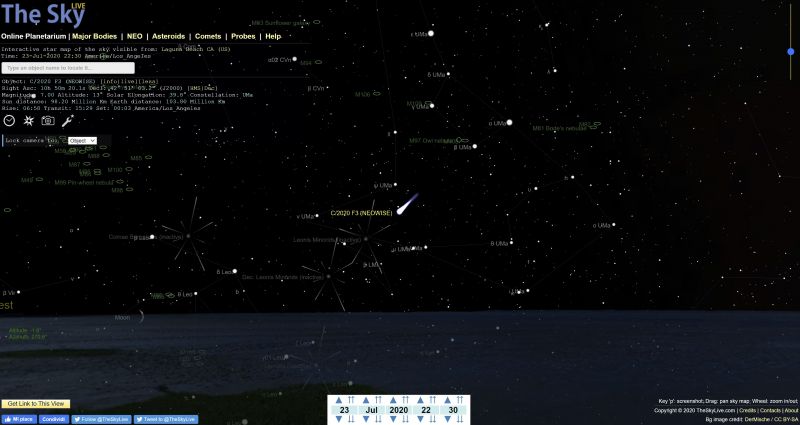 If you enter their page for comet NEOWISE, you’ll see a link to an interactive sky chart. You can manually input a location, and you can also use the clock icon/tool to track the comet’s motion from day to day, hour by hour, etc. 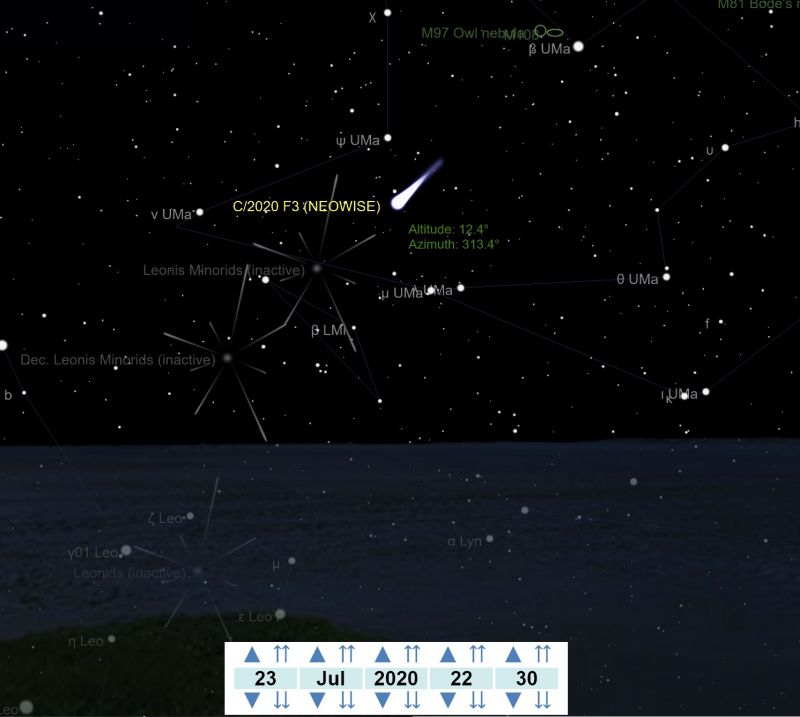 When you hover your mouse over a point in the sky, the green text lists numbers (degrees) for Altitude and Azimuth. These might sound intimidating, but if you’re not familiar with how to use a map and compass then you can probably get by just based on the general N/E/S/W markings, or nearby celestial objects such as the moon, which will be to the left of Comet NEOWISE on a few nights around July 23rd. 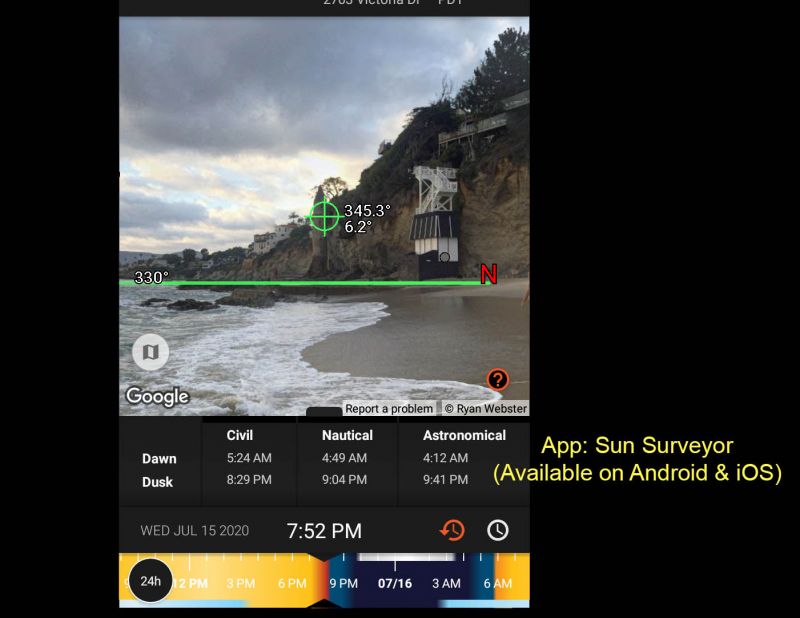 If you’d like to take it one step further and get truly advanced with your astro-landscape photography composition planning, then you can use an app like Sun Surveyor to actually align those numbers, and predict exactly where in the sky NEOWISE (or anything, the sun, the moon, the Milky Way) will be with incredible precision! 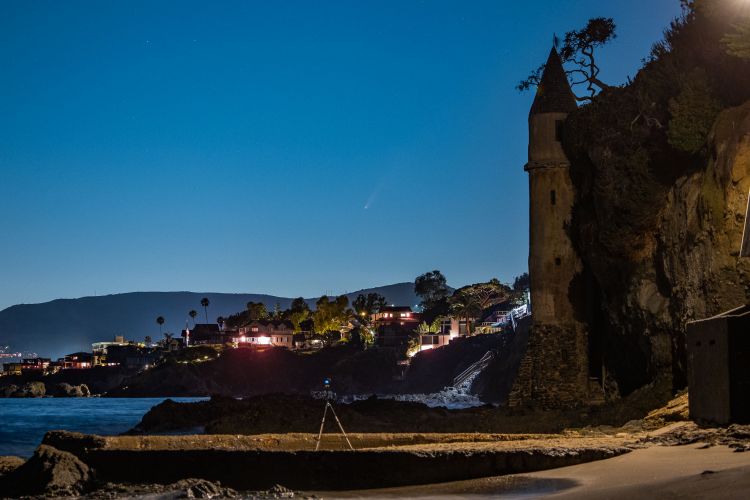 And there you have it! What are you waiting for, grab your big heavy tripod, go outside and shoot some astro-landscape photos! Even if you can barely see it, it’s a special experience, and your excitement will jump when you first see it appearing on the back of your camera, and then also if you are lucky enough to see it with the naked eye.

Good luck, and be safe out there!