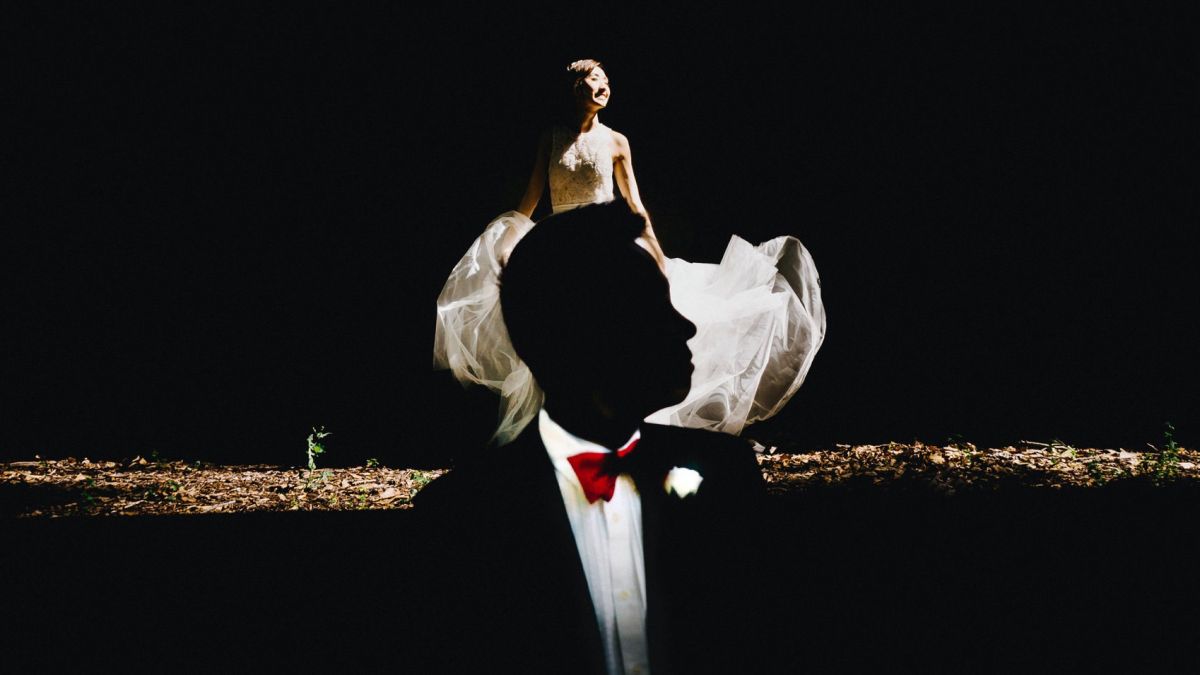 How to Create a Silhouette

Silhouettes can be a great way to create a dramatic portrait or emphasize colors and shapes within a scene. Silhouette photography essentially creates a dark shape/outline of someone or something visible against a lighter background, especially in dim light. It’s important to remember to place your subjects against a lighter background or use a flash as a backlight to chisel them out of a scene in order to make them pop. Another key component when trying to create photography silhouettes is to properly expose for your background in your scene rather than your subject matter. You’ll see that in a lot of the silhouette photography examples below, there is rich and vibrant color due to proper exposure settings.

Now that we’ve covered how to create a silhouette, let’s check out some examples! We challenged our Master Wedding Photography Facebook Group to show us their best wedding picture silhouettes in our ‘Moody Silhouette’ featured challenge. 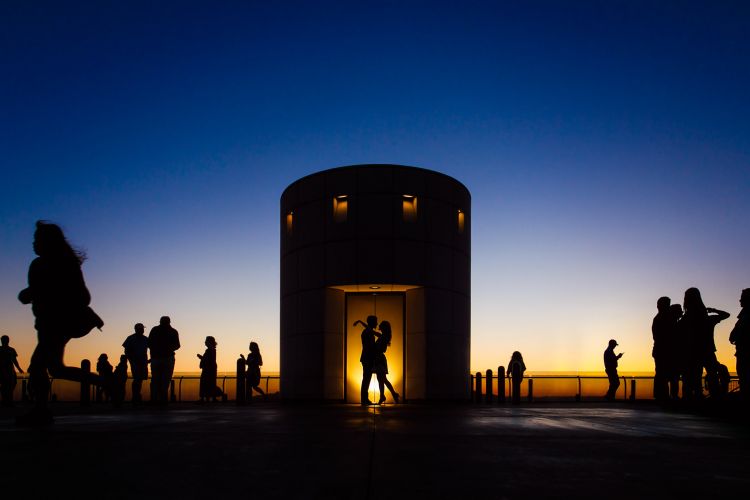 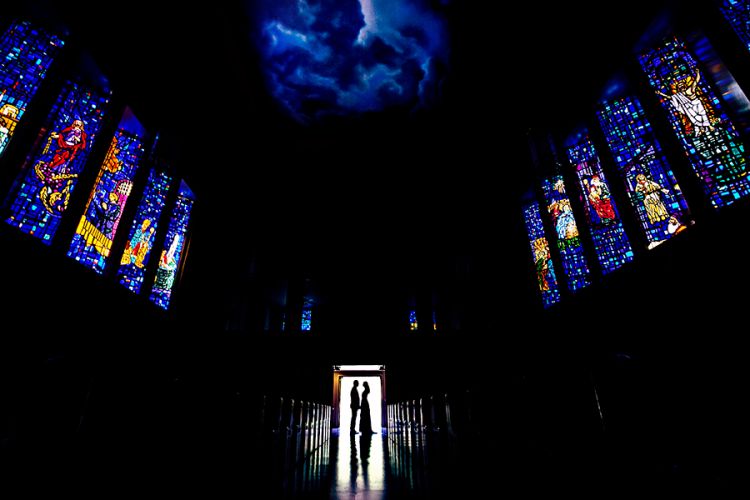 “I photographed with the intent of silhouetting the couple since the doors to the church were open and I knew I could blow out the background behind them. There were gorgeous stained glass on the sides and a breathtaking cloud mural above, which I really wanted to accent. The shot was taken right after the ceremony.” 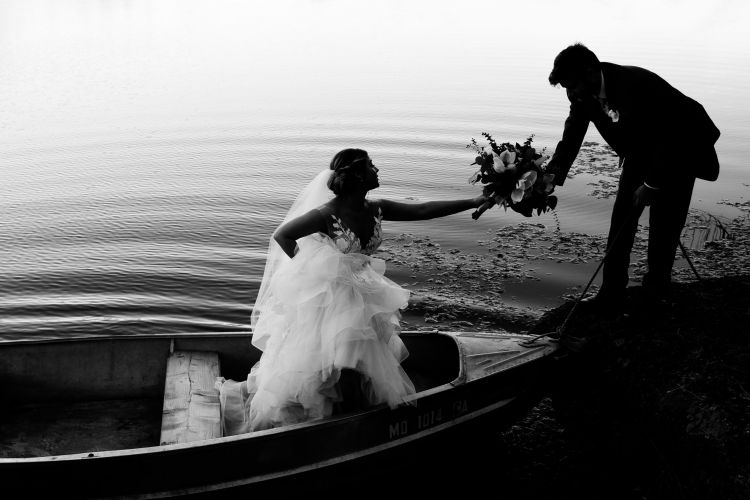 “After we got some couple portraits on the boat, the groom got off and I had him push his bride out for a quick shot of just her on the boat. When we were done, I had the groom pull her with the rope to try and create a moment of connection between the two of them. This angle provided the cleanest background and since the lake was way brighter then they were in the shade, I decided to go for a silhouette.” 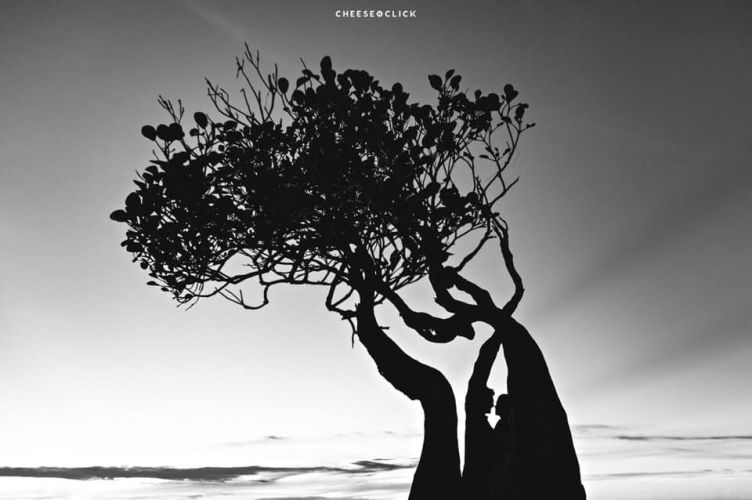 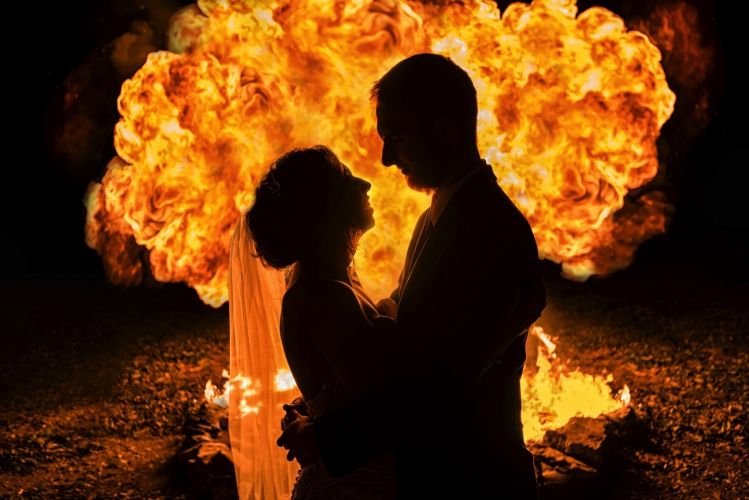 “What happens when you mix a photographer who has a backyard wedding reception with a fire breathing friend, bonfire, and gasoline? A ridiculously epic atomic fireball silhouette! I saw the firebreather spitting gas onto the bonfire and joked about creating a massive fireball. He accepted the challenge and a joke became reality after a few tests. The couple wasn’t in any danger for this and we made sure to take every precaution before attempting this with the bride and groom in it.” 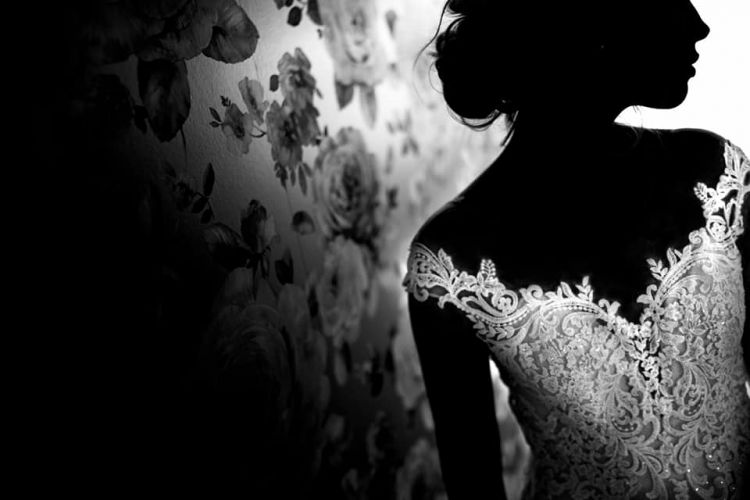 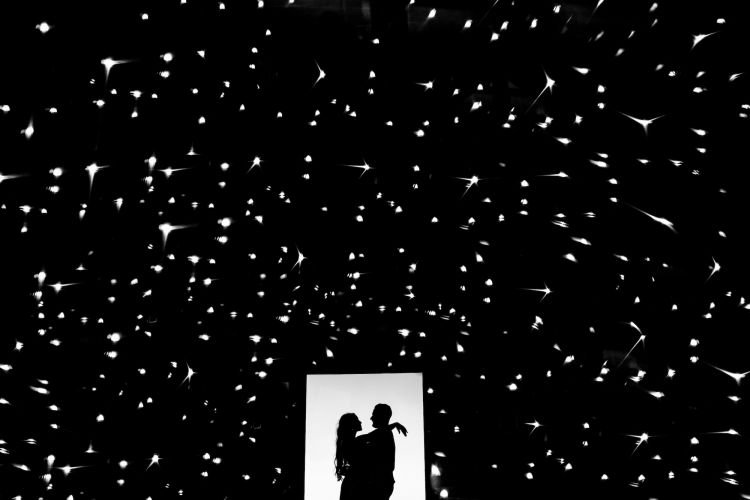 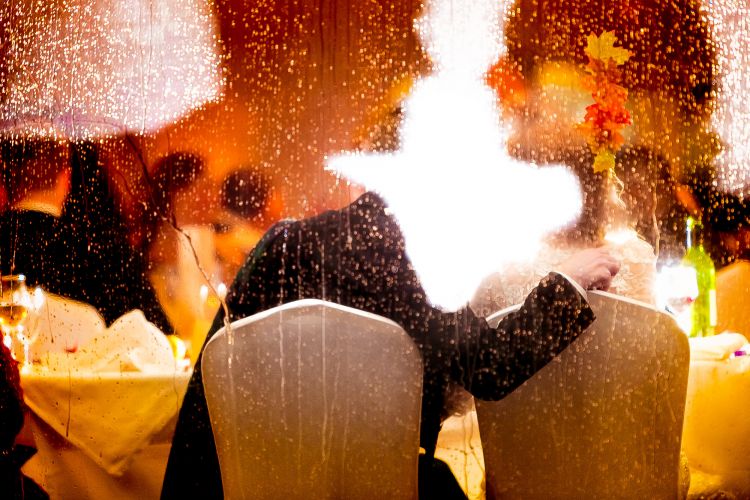 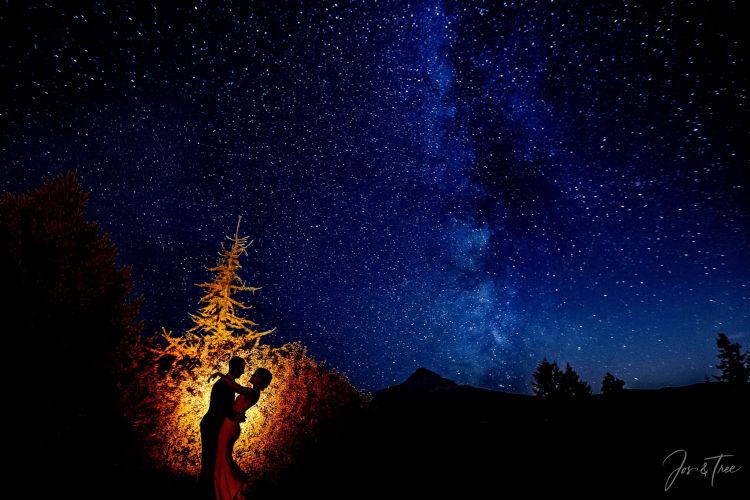 “The night was clear enough not to use an iPhone app (and no light pollution anywhere). We could see the Milkyway spitting right out of the top of Mt. Hood. Captured on a tripod using a Canon 600 Speedlight with a MagMod CTO gel and MagSphere pointed at a tree to silhouette the couple.” 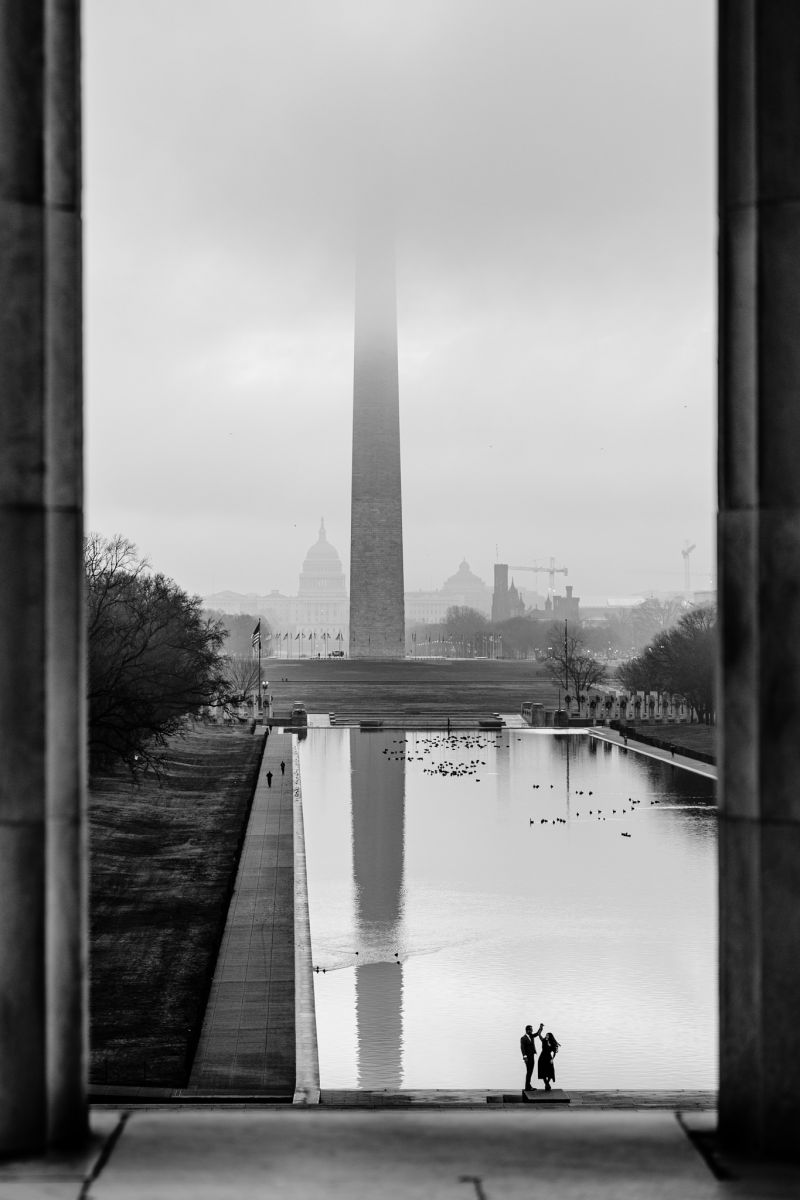 “It was an incredibly hazy, and cold morning at the Lincoln Memorial. I’m sure the couple had grand visions in their mind of a perfect session at sunrise. What mother nature gave us that morning instead was practically a whiteout. The Washington Monument was barely visible when we arrived at 6:30a, so we started the session between the iconic columns. As I saw the fog was dissipating, I had the groom-to-be put his cell phone on speaker in his pocket so I could talk with the two of them and direct them exactly where I wanted them to be. I shot their whole walk down to the Reflecting Pool, and as they approached the spot I was hoping for, I asked them to pause and embrace. The embrace became a dance, and eventually a spin. All I could hope for on this gloomy, rather perfect, January morning.” 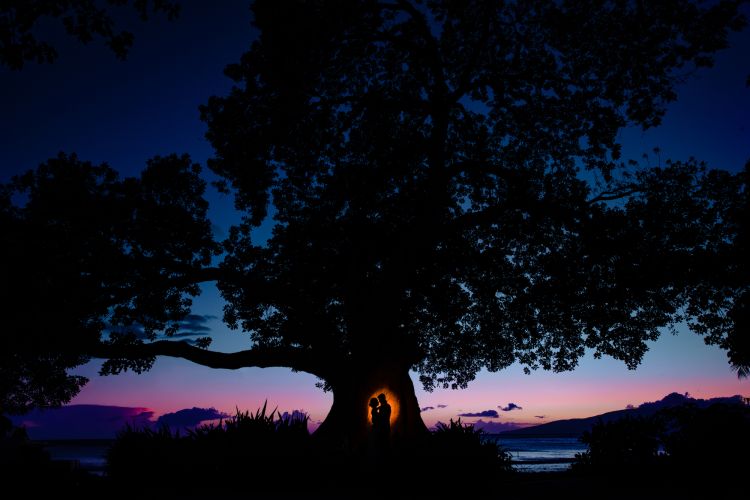 “One of the many reasons this couple booked this venue was because of this large rubber tree that serves as the centerpiece of this property. A few months before the big day, the groom’s father passed away. Because the tree held such significance on their wedding day, and because his father loved it so much, I decided to create this shot for the couple.” 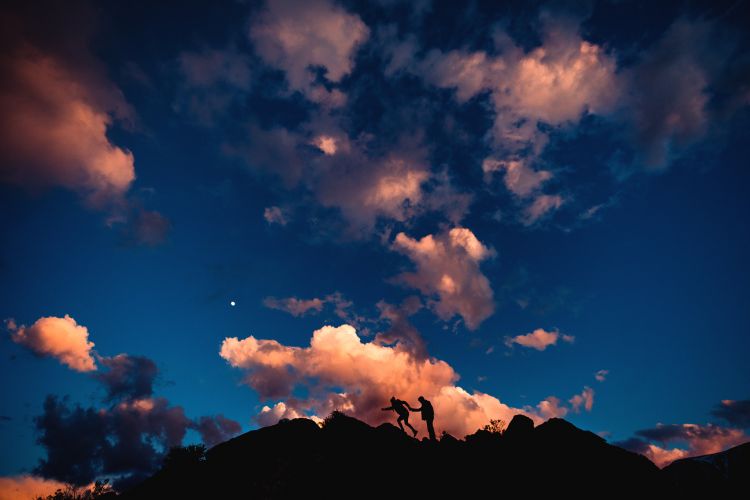 “In the mountains in California, late spring and early summer bring these intense monsoonal skies and it’s the perfect time to make epic silhouettes like this. You just have to keep the couple around after the sun has set because the magic happens about ten minutes later.” 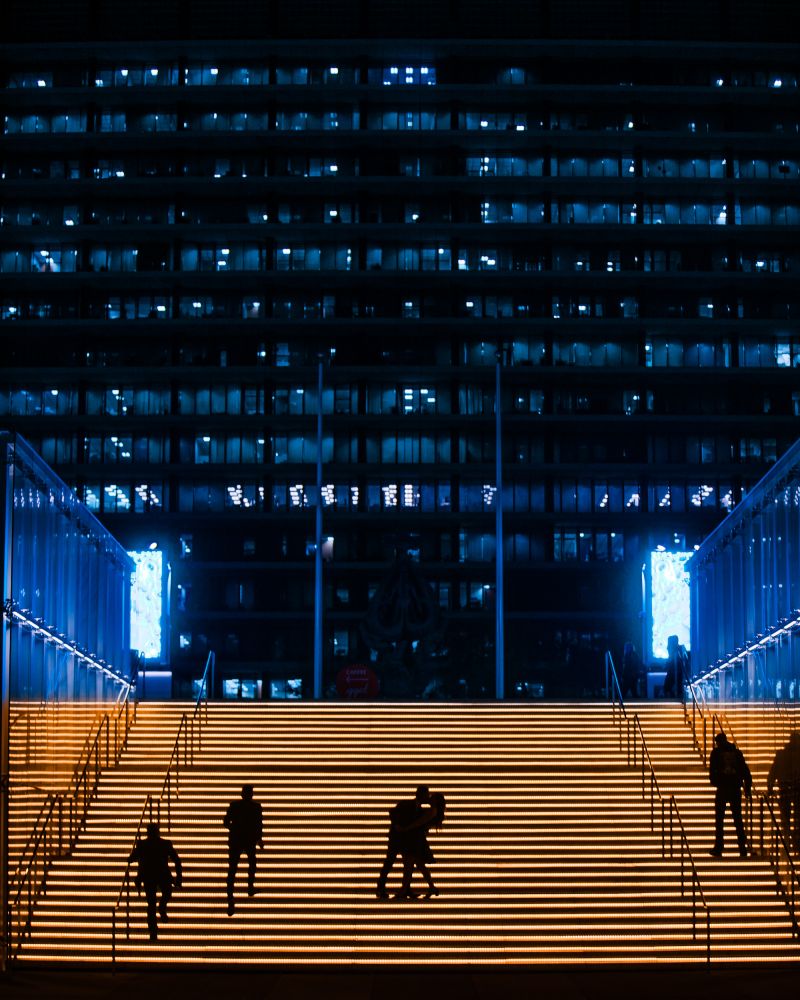 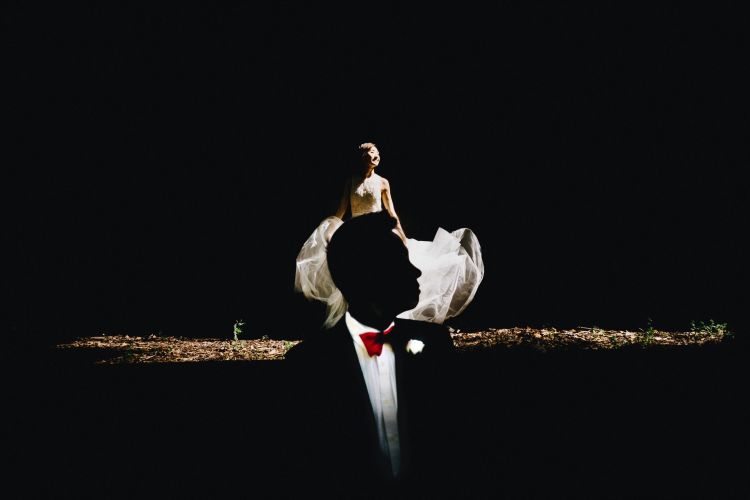 “It was a bright sunny day, around 2 PM, the sunlight was very strong. I saw a spot that had a gap of light that came through between two tall buildings. I asked the bride to stand in the bright area where everything was dark behind her. The groom stood around 2 meters in front of her, his body and face were in the shadow where only his white shirt had the sun shining on it. Then I asked the bride to spin and shake her white gown as high as she can, so it covered the groom’s head as the background until I got full head shape silhouette of the groom. I took around 10 photos and this was the best one.” 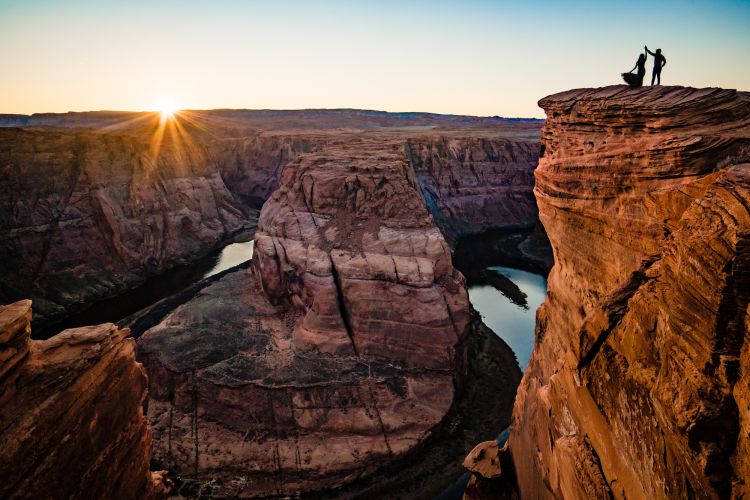 If you’re interested in learning more photography basics, make sure you check out Photography 101 and our YouTube Channel! To be featured in our next challenge article, join our Facebook Communities and participate in our weekly featured challenges!

How to Quickly Create a Convincing Tilt-Shift Effect in Lightroom