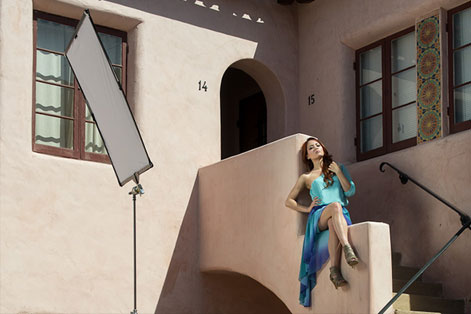 When it comes to creatively controlling sunlight when you’re shooting outside, the pop-up or collapsible reflector is one of the most common equipment that us photographers have. They’re cheap, portable, and light. They usually come in either a silver/white combination or a 5-in-1 combination that has gold, silver, white, silver/gold, and semi-translucent. They come in a variety of sizes and shaped either in a circle or an oval.

The problem with them is the they are not sturdy, especially when you have to hold one up over your head in the wind. Sure, you can put them on a lightstand via a reflector holder, but they don’t always stay in one place, especially if it is windy.

There are also flags, scrims, and Sunbounces, which are more sturdier than the pop-up reflectors.

Flags and scrims are essentially aluminium or steel frames that hold either a black fabric to block light (flag), a semi-translucent white fabric to diffuse the light (silk), or net to stop down the light (net). They can be hand held or placed on a light stand or c-stand. While I love flags, they generally don’t fold down at all, making them a pain to transport, and generally, you can’t switch out the fabrics, so you have to have several flags and scrims instead of one frame and several fabrics. They come in many sizes from small narrow ones called “fingers” to giant 4’x8′ black flags called “meat axes”. They are also more expensive than their reflector counterparts.

A California Sunbounce reflector is typically handheld and has an aluminium frame with different fabrics stretched across the frame. The frame does break down and you can change fabric, but if you have used them before, then you know that they are pretty difficult to put together. Plus, they are very, very expensive. A 2’x3′ Micro Mini silver/white Sun Bounce Sunbounce starts at $180. 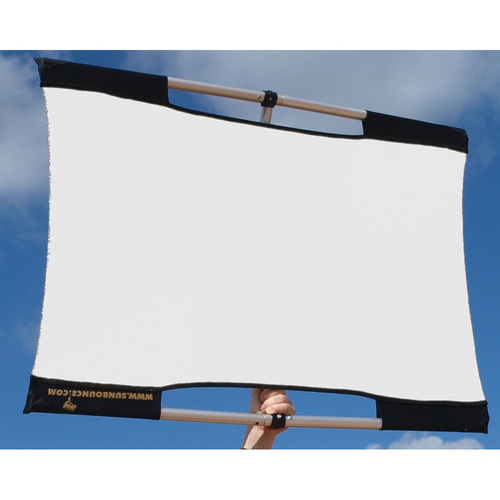 The Switchblade Flag System is a collapsible flag and scrim system that takes the best of collapsible reflectors, traditional flags and scrims, and Sunbounce. The frame collapses down to a narrow bar, but when opened up with a fabric stretched across them, they are almost as sturdy as traditional flags. And price wise, an 18″ x 24″ frame starts of $49.99 and the fabric starts from $24.99. I was sent over the 18″x24″ frame, the pre-production 2’x3′ frame, and the pre-production 4’x4′ frame.

As you can see from the videos, the way they work is pretty simple. The frame folds open into a rectangular position. Once open, the hinges slide into place. It works, but I do find that it doesn’t always stay in place securely until you put one of the fabrics on it.

The fabrics themselves have elastic webbings that wrap around the corners so that when you fasten the fabric on the frame, these webbings serve to keep the fabric taut and the frame hinge locked in. The whole thing does stay pretty stable, but I would still like a way to lock the hinges in place. 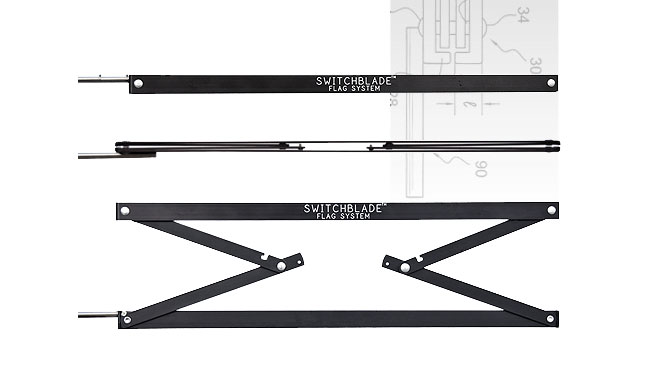 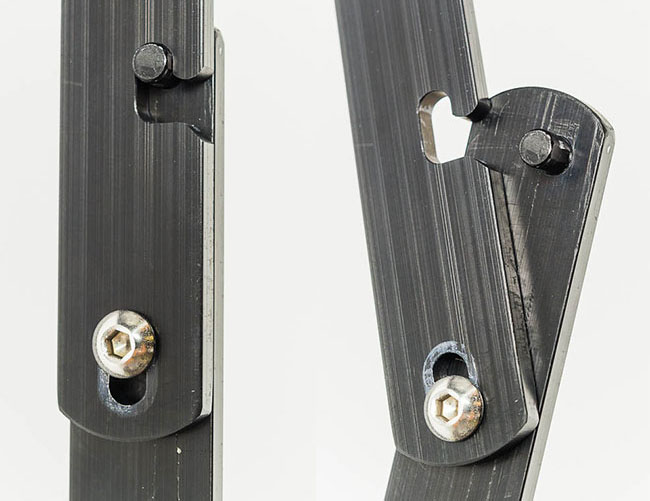 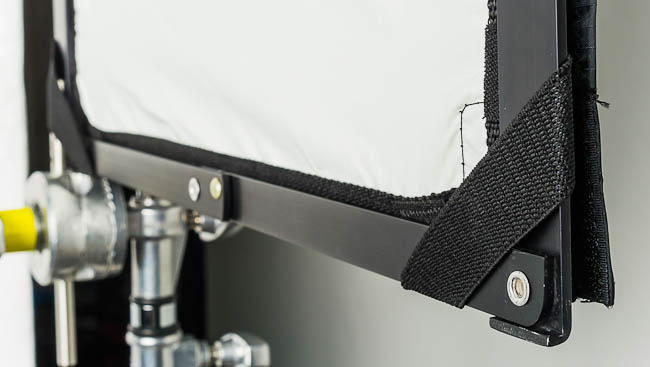 One of the 2’x3′ Switchblades supplied has a variation on the the frame, with one side having a row of holes. This allows for a less defined shadow outline on that edge when you are using a scrim or net. Below, you can also see the size difference compared to the 18″x24″ frame. 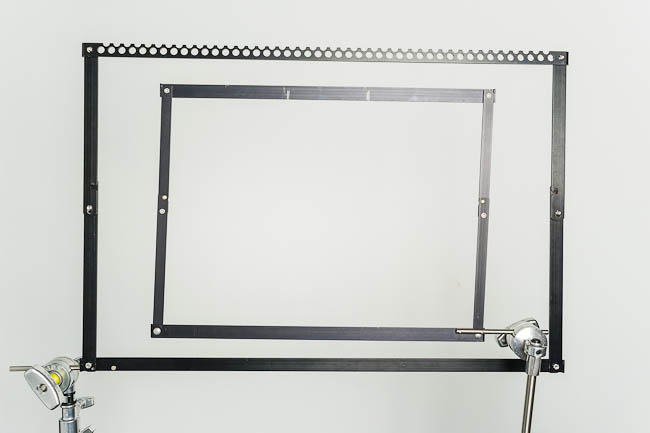 Finally, the 4’x4′ is a square format of the Switchblade. One major difference with the largest frame is that the rod to clamp to a C-stand is at the center of the frame edge as opposed to the corner. This is for more stability and less stress since this frame is heavier than the smaller Switchblades. There are also velcro on the frame that aligns to the velcro on the fabric. This helps keep the fabric stay in place on this large frame. 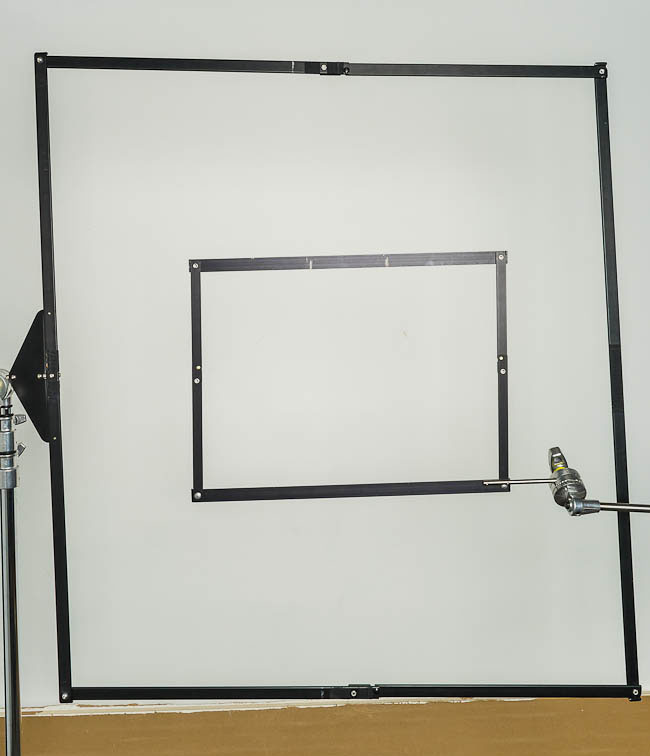 
My friend, fashion photographer Judy Wang had an outdoor photoshoot for 5th Culture.com and I thought it would be the perfect opportunity to test the Switchblades out. We ended up using the 4’x4′ the most, since it can provide nice broad bounce, like the example in the photo. That set up is something that is not really feasible with a pop-up reflector, especially being 9 feet off the ground in wind.
Pros

There is a lot to like with this system. The Switchblade does it job well once the fabric is installed. When closed down, the frame and fabric all fit into a compact soft bag that is no bigger than a typical tripod bag, making it a portable system on the go. You can have several Switchblades in your backseat or trunk.

You can also carry several fabrics in each bag. Some of the additional fabrics I have for the review are prototypes, but the ones that you can get right now are: 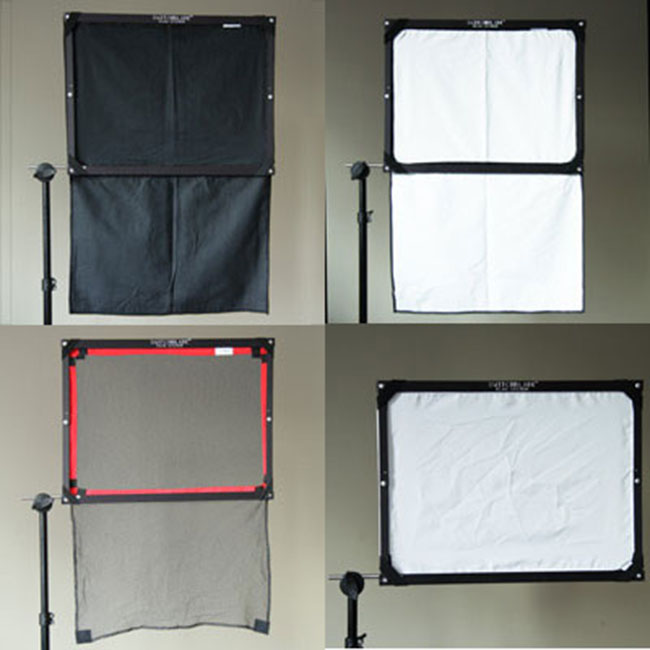 One thing that I do noticed is that the two smaller frames have the rods in the corner, and you have to install the fabric fastener through the rod. This means that if you already have the Switchblade fixed on a C-stand, you have to take it off the C-stand in order to change fabric.

The carrying bags also only have a handle on the top of the narrow side of the bag, as opposed a more traditional duffle bag arrangement with two handles on either sides of the zipper. This makes moving them around somewhat awkward. The 4’x4′ bag does have a shoulder strap, but it is very long even when adjusted. A shoulder strap for all of the bags, in addition to the duffle bag style handles, would it so much easier to carry around. 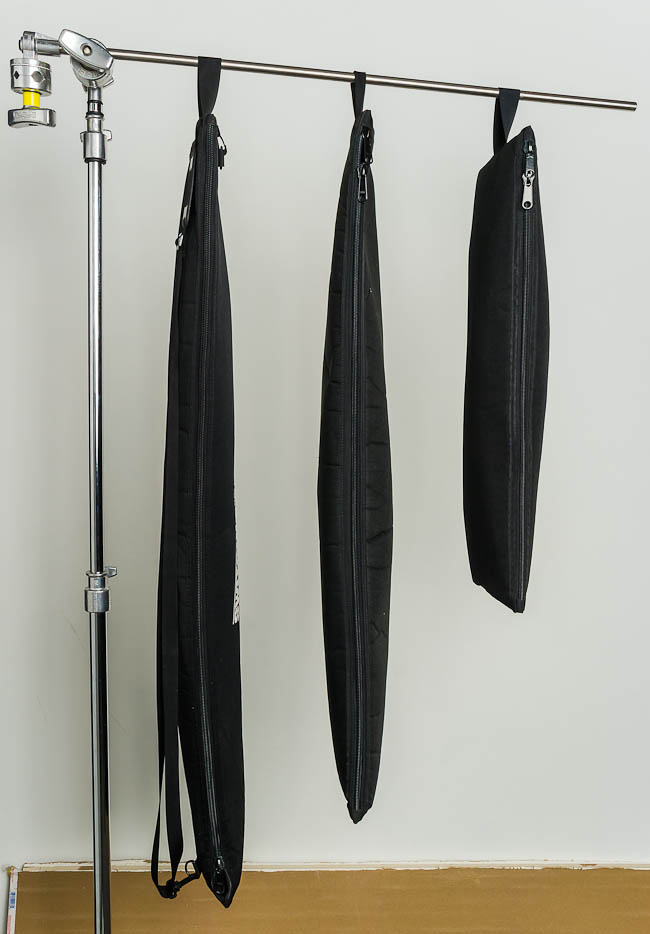 The biggest issue I have with the Switchblade is with the locking hinge system. The frame is just not as secure until you put the fabric over it. I showed the Switchblade to several other photographers and they all agree that they would rather have a locking mechanism on the frame, even if it slower to break down, so that when switching fabrics, they don’t have to worry about the frame collapsing down and potentially pinching their skin, which actually happened to one of my fingers

If it’s going to have it open, then let it stay open securely, I say.

Despite all of that, I think the Switchblade hits the right spot in terms of portability, sturdiness with the fabric, and pricepoint combination compared to the collapsible reflector, traditional flags and scrims, and the Sunbounce. Sure there are inconvenience with the hinges, the one handle, and the corner rod, but overall, it is easy to use and useful to have.

Where as the silver/white Sunbounce starts at $189, you can get the the Switchblade Flag Kit where you can get 2 Switchblade frames, the carrying bag, and four flags/rags for $199.
The Switchblade works pretty much as advertised, but if the improvements I mentioned gets implemented, it could be a really competitive product to the traditional solutions currently out there.