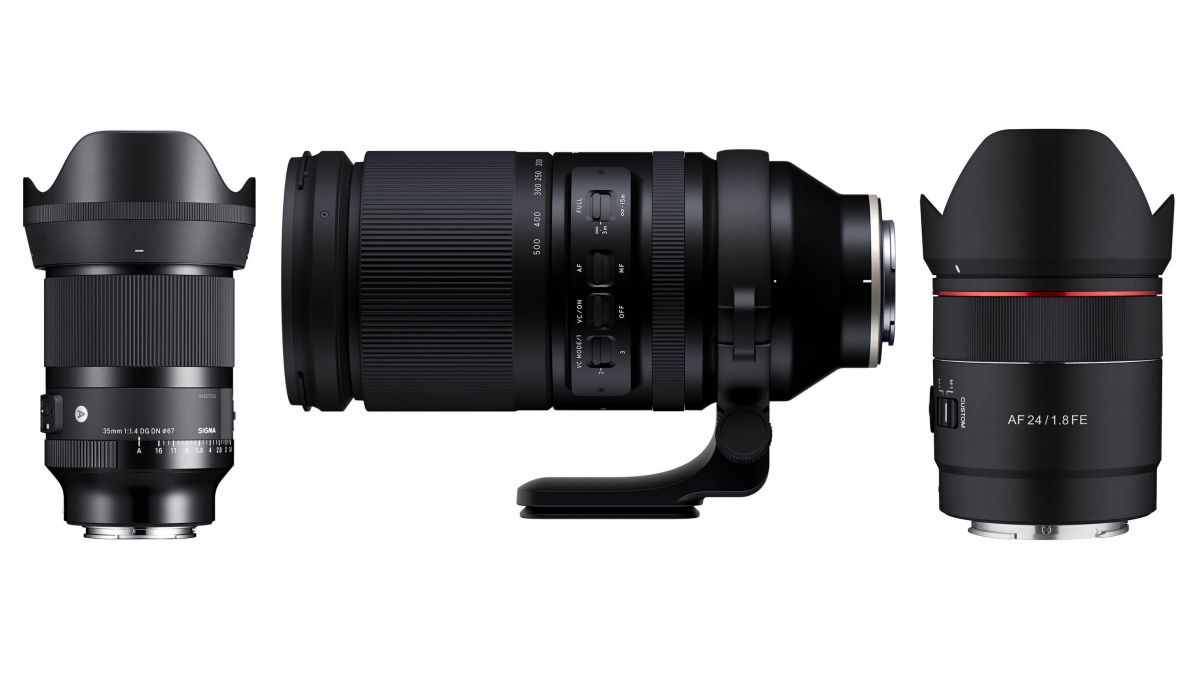 There are seven new Sony lenses in the last month, counting name-brand and third-party optics. That has to be some kind of record!

A lot of these new lenses have been pretty exciting, too, with some long-awaited, “why didn’t they make this lens sooner?” options, such as the ultra-portable, lightweight Sony trio of compact full-frame primes, the FE 24mm f/2.8 G, FE 40mm f/2.5 G, and FE 50mm f/2.5 G. (No, seriously, Sony, why didn’t we see these lenses SEVEN years ago?) On the other end of “exciting”, the much more exotic end, …Sony recently announced flagship pro lenses like the FE 50mm f/1.2 GM and the FE 14mm f/1.8 GM.

Of course, Sony themselves do not get all the credit. In fact, the E-mount would not be nearly as enticing as it is today without third-party lenses; virtually every brand is releasing something exciting these days!

Let’s not forget the all-metal, no-electronics optics, (some of which are, in fact, also available for Canon RF and Nikon Z, mind you, due to their contact-less nature) …such as the ultra-exotic trio of f/0.95 lenses from Venus Optics / Laowa, the 33mm, 35mm, and 45mm f/0.95’s. Yes, that’s right, more lenses with one of the most exotic aperture numbers ever, F-zero-point-nine-five. 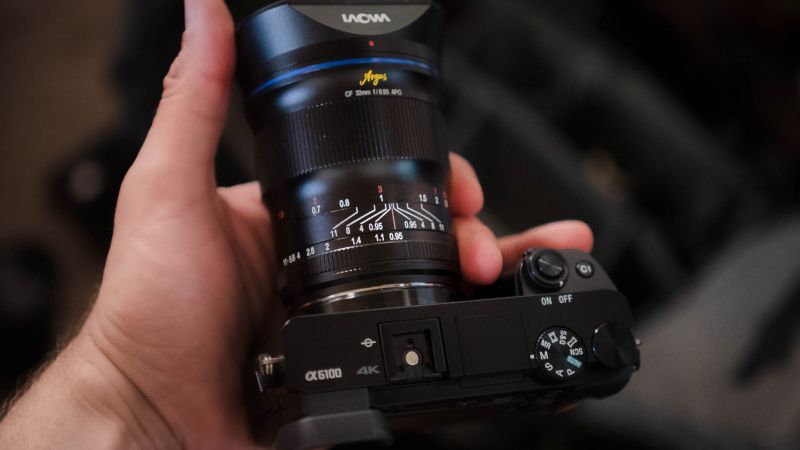 The Sony E-Mount Is “Open”  (What Does That Mean?)

Canon and Nikon are both making truly amazing mirrorless camera bodies now. In almost every way, they have both “caught up” to Sony, certainly in terms of build quality and overall image quality, and the difference in sheer speed is only going to be noticed by the most demanding high-speed action shooters who are using the likes of a Sony A9 II or the Sony A1.

The answer is, it’s complicated. First and foremost, there’s this: Sony’s E mount is an “open protocol” mount. What does this mean? It means that third-party lens makers have (enough of) the technical specifications of the electronic communication contacts to make lenses with fully functional autofocus and apertures. In fact, if they are willing to “work with” Sony fully, as Tamron apparently has done, they can even transmit focus distance info to the camera and receive impressive AF performance. Also, third parties can utilize the Sony communication protocols for on-lens custom function buttons and physical aperture dials, as Sigma has done with many of their recent E-mount lenses.

[Related: Is Sony’s E-Mount “Too Small”? Let’s Put This Debate Out Of Its Misery] 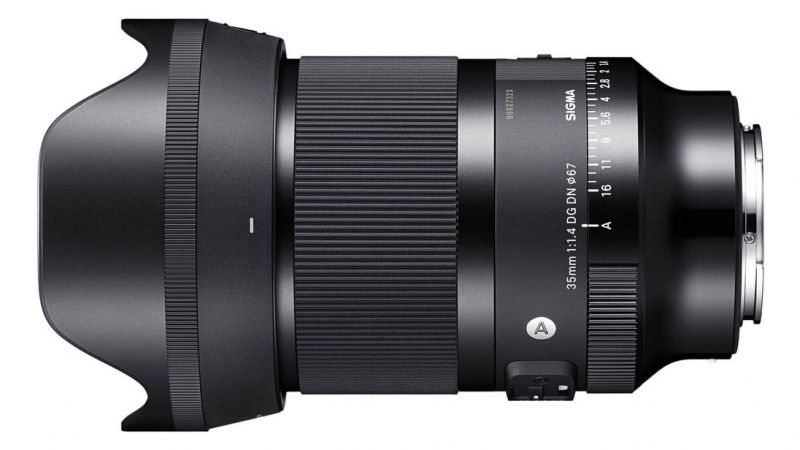 It may surprise you to know that, unfortunately, the same cannot be said for Canon’s RF mount and Nikon’s Z mount. Their electronic communication contact protocols are “secret”, so, if a third-party lens maker wants to produce an autofocus lens for either of these mounts, they have to reverse-engineer the electronic communication from scratch, and it would seem, without “permission” from Canon or Nikon.

Well, Canon’s RF mount is, allegedly, really just the EF mount but with one or two additional communication contacts. Thus, we have, in fact, already seen a couple of AF lenses for RF from at least one third-party lens maker, Samyang/Rokinon. In their case, however, all they did was ignore the new mirrorless communication contacts, and pretend they were basically just making an EF-mount lens, to keep things simple. 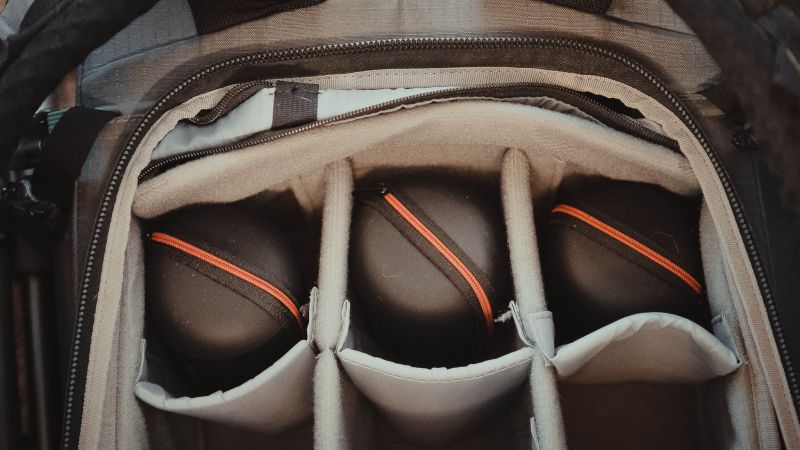 So, that is partly why Sony is getting all the third-party love. Of course, another huge reason is that Sony’s E-mount is the most common/popular, which means that sales volume of aftermarket lenses is likely quite substantial, even in such an increasingly competitive market.

The question is, will we ever see lots of third-party lenses for Canon RF and Nikon Z? Yes, that is very likely, because despite Sony being in the lead in terms of mirrorless camera sales, Canon and Nikon are still widely popular, and like I said, their systems show a lot of promise overall. Entry-level cameras like the Nikon Z5 are offering ruggedly professional ergonomics, sensor stabilization, and dual card slots for a mere $996, (that is, currently on sale for $400 off!) and high-end cameras like the Canon EOS R5 are offering 8K RAW video for “just” $3,899 (I say “just” because most 8K RAW-capable video cameras cost tens of thousands of dollars).

There is undoubtedly plenty of sales volume to be had/shared among third-party lens makers. Unfortunately, they’ll have to reverse-engineer the Canon/Nikon mount protocols first, but then, we should start to see really big Tamron, Sigma, Samyang/Rokinon etc. announcements.

Sony E-Mount Will Stay Ahead, Nikon & Canon Will Close The Gap

In conclusion, Sony’s E-mount is staying ahead of the competition, currently gaining new lenses at a pretty exciting pace when you add up all of the third-party options. However, Nikon and Canon are not actually very far behind, because this is a  similar situation to when Sony was the only full-frame mirrorless system on the market; once Canon and Nikon options arrive, they will close the gap VERY quickly.

In other words, it is very possible for all of these new (third-party) Sony lenses to arrive for Canon and/or Nikon in a very rapid-fire fashion, in which one or more companies announce 5-10+ “new” lenses all at once. (To be clear: these will be existing E-mount lenses, but with a different mount.)

What is my point here? If you need to buy something today, it’s hard to deny just how attractive cameras like the Sony A7C are. Especially when paired with any of the Sony, Tamron, Sigma, or Rokinon/Samyang lens options, just to name a few.

Want to work with exotic fast-aperture lenses? Or maybe casual walk-around photography with a compact, pocket-sized prime lens kit? You won’t just have one or two options, but often three or four lenses to choose from!

However, what if you’re attracted to Canon or Nikon systems, for whatever reason? Seriously, that Nikon Z5 is awesome! I believe we’ll see the floodgates of third-party lenses pen for Nikon Z and/or Canon RF within, say, 6-12 months? Now that’s an exciting thought. 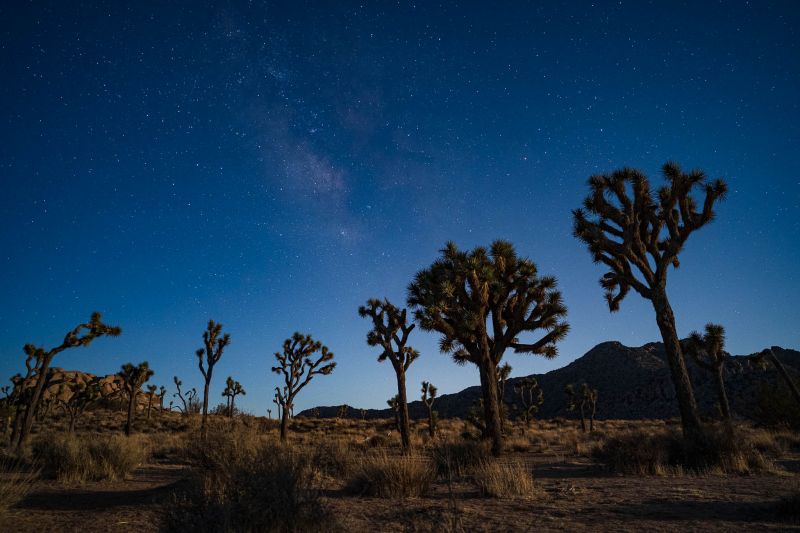 Honestly, in a year or two, the “playing field” will probably be absolutely incredible for all mirrorless systems, and it will be thanks to all the third-party lens makers that are creating fully functional autofocus lenses.

So, which new Sony lens are you excited about? Personally, I just got back from filming content with the Samyang (Rokinon) AF 24mm f/1.8 FE, and I have to say, wow is it sharp! It’s a dream lens for an astro-landscape photographer, and I’m excited to share more with you soon!