A good fitness portrait shows off form and figure. In this video/article, I’ll be walking through a fitness photoshoot in an urban setting.

A fitness photoshoot highlights form and definition on the subject. Intentional composition and lighting can make all the difference in the world. For this tutorial, I’ll be photographing my friend,  Derek. We’ll be capturing three unique fitness looks. I’ll be highlighting specific lighting techniques to sculpt out the muscles for dramatic effects. Let’s dive in.

I set the scene by first placing Derek by this hedge that extends into the background. The first thing I’ll do is move Derek into better lighting. The sunlight bouncing off the car provides a great soft light source. 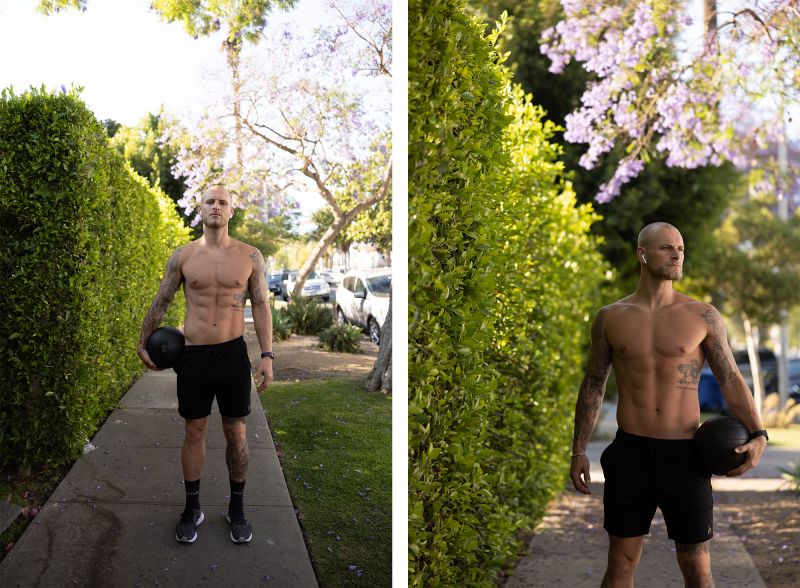 See the difference with and without the bounce.

When Derek faces the car, the lighting fills in much of the shadow. This causes a flat appearance. To create form with the light, I had Derek turn away from the light. As Derek turns, notice the definition taking form.

The image I had in mind was a straight forward power pose. Then, I used the volleyball to hide the junk in the background. This is my exposure with the settings above. I darkened the image to set the scene for our next step.

My goal was to add a bit of a kick with the Profoto B10. To begin, I placed the flash to match the angle of the light bouncing off of the car. I also used a grid to focus the light in on Derek’s face. As always, be sure to weigh your stand with a sandbag so that your light won’t fall over. I set the light to power level 8, roughly 50-60 watt seconds, as well as high-speed sync. The result is a nice balance between the flash and the ambient light that looks natural.

A quick tip for your fitness photoshoot is to have your subject exhale and flex just before capturing the shot. When you take the picture on the inhale, you lose muscle definition. Check out the difference above.

Here are some of the final images from this static look.

In order to capture action, I recommend getting a low angle. By lowering the camera, we give Derek the appearance of towering over us and intensifying the movement. Check out the comparison between the normal angle and the low angle.

I chose this spot because of the white wall and the angle of light. If I take a shot with the direction of the sun and against the wall, we end up with an image that is just okay. However, we lose the highlight and shadow definition on Derek.

By simply shooting at an angle to the sunlight, we get great definition and contrast on Derek. 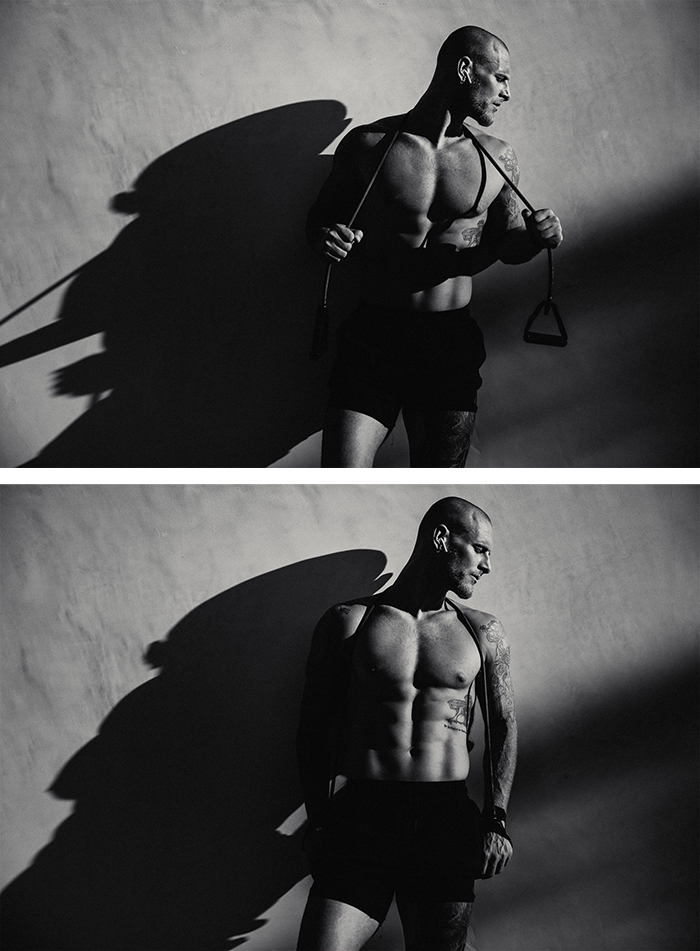 I instructed Derek to interact with the cord and keep it taught to prevent a strange dangly shadow. Here are the final images.

Don’t forget to capture some close up detail shots using the sun as an edge light for that dramatic look. 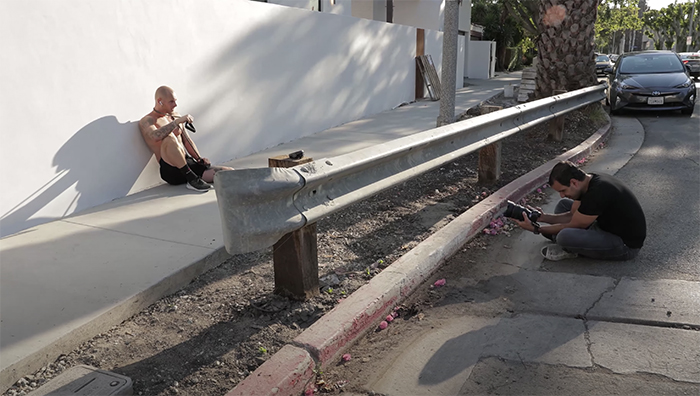 For my next shot, I took the images from behind the railing for a foreground. 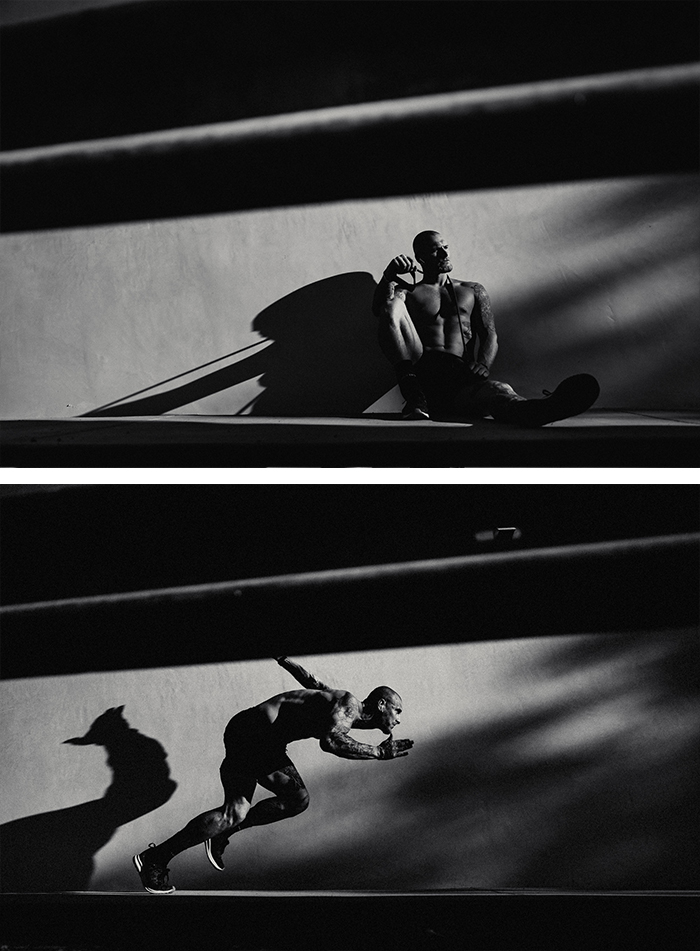 I captured various images, from Derek sitting, to him taking off on a sprint for some epic action shots.

Scene #3: Sculpting Out Form With a Single Light

I started off with Derek in front of this white wall. First, I’ll show you how the image looks with natural light. Notice that with only the flat light, we don’t have a lot of definition on Derek.

Using my ISO, I darkened the image to set the scene. Then, I’ll add the hard flash from the same direction to emphasize that light as well as add to the dimension. 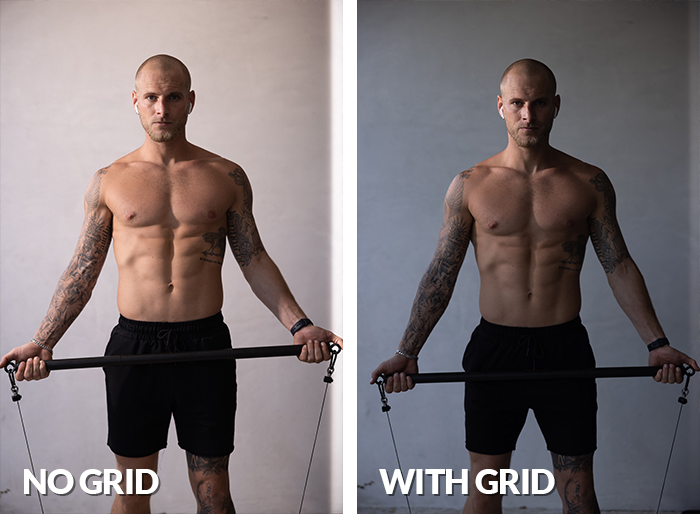 I placed the Profoto B10 at a slight forward angle, slightly in front of Derek. Without a grid, the light spills everywhere, and as a result, we lose that dramatic effect. To remedy this, I added a grid and fined tuned the position. What we get is a great highlight on Derek’s face. When you capture an image like this, I recommend using Highlight Alert. This will help guide your flash power to prevent any blown highlights. 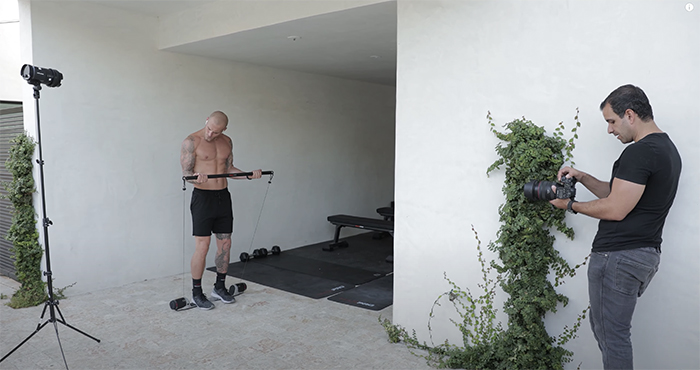 Lastly, I used this small bush as a framing device to add a foreground to the scene.

Here are some of the final images.

I hope you enjoyed this article/video. Lighting is a crucial part of a fitness photoshoot. By using proper techniques to bring out definition, you too can capture intense and epic photos for your clients and subjects. For a more thorough guide on flash photography, be sure to check out our Complete Lighting Course from our Premium Channel. In addition, be sure to check out Visual Flow for lighting based presets such as the Pastel Pack like we used here.

Thanks for watching and join us next time for more fun photography tips and tricks!