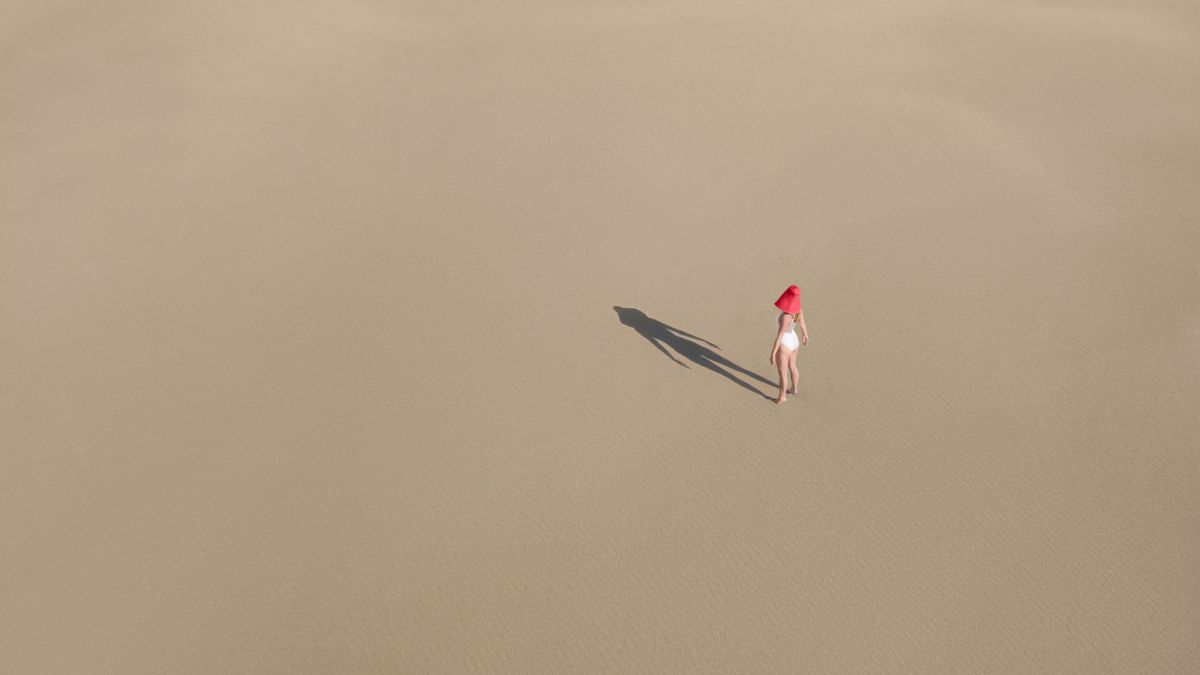 We previously featured Walls’ work with the ‘Pools From Above’ series, in which Walls first used a drone to bring a unique perspective to conceptual photography. While most conceptual photographers shoot on handheld cameras, Walls wanted to showcase the value of an alternate viewpoint to convey a meaningful story. That visual aesthetic lends itself well to helping Walls achieve his goal.

The “swimmers” return in the new series, but not to the pool, or anywhere near water. Instead, Walls moved from an overhead view of pools to the vast emptiness of the dunes. The change in scenery plays an important role in the overall concept.  With his DJI Mavic 2, Walls captured aerial photos of the open dunes with sparsely, yet meticulously placed subjects to mirror the state of the world during the pandemic. The photos use compositional tools like repetition, symmetry, and negative space to offer commentary on the distant and repetitive nature of pandemic life.

Walls has carefully arranged each frame in the series, “placing the model at even lengths and highlighting the shadow cast to highlight our solitude and the lurking darkness of the era.” If you look closely, you’ll find that Walls posed the models mid-movement to further emphasize uniformity and surrealism. As he explains, “The figures are purposefully static, to symbolize how we have been frozen in time over the past 18 months.”

An Interview on the Topic of Conceptual Photography with Brad Walls

For those looking to explore conceptual photography, we asked Walls about the challenges he faced while producing this series. We also asked about the process he follows in creating the series from concept to final images.

What is the biggest challenge in creating conceptual photography?

“The concept. Creating a series with more than 10 photos with a recurring theme with a drone has its challenges. But, it also helps motivate me. On the execution side the challenge was timing. I had a certain look I was trying to achieve, and I knew that I needed rainfall the night prior to shooting to achieve that flat sand look. Patience is a virtue! Also it can be terribly gusty on sand dunes, so handling the drone at higher altitude shown in ‘sentinel’ created some challenges. It must be said that the majority of my work is at low altitudes, so as a drone user I never have too many technical issues on shoot.”

Do you have a favorite photo from the series? If so, which one, and why?

“‘Dissonance’. It’s a perfect example of what I am trying to achieve with my work, that is conceptual aerial photography. That view and angle is almost impossible to take with a handheld camera as it’s 10-15m off the ground. It creates this unique angle to work from, similar to Massimo Vitali, only higher and without a ladder.”

For photographers looking to create impactful images like this, could you share your process of coming up with your concepts and ideas?

“As a conceptual photographer, creating these types of series plays heavy on a storyline. It’s important to have a simple idea and start creating mood boards around that main theme. For example, with this shoot, Clifford Coffins inspired me. I wanted to pay homage to that through a series while playing into today’s world being the pandemic. On the execution phase, my aesthetic places emphasis on the design aspect of photography (symmetry, negative space, etc). Hence, many of the shots are sketched out prior on my iPad. 75% of the shoot is planned and 25% is free associated based on collaboration with other members/models.”

[Related Reading: Aerial Photography Series | The Beauty of Synchronized Swimming From Above]

All photos shared with permission of the artist.

Since 2019, Sydney-based aerial photographer Brad Walls has refined his style and garnered international acclaim. He set new precedents in photographic expression and defined a new era of aerial photography. Walls received several awards and attracted features in Washington Post, Guardian, CNN and multiple other publications around the world

‘Detached, in Harmony’ recently placed second in the 2021 Fine Art Photography Awards ‘Conceptual’ category. It also placed silver in both the prestigious PX3 awards and Moscow Fine Art Awards of 2021. Walls currently plans to exhibit ‘Detached, in Harmony’ in a solo exhibition in 2022. After that, Walls expects to release the “Pools from Above” series as a Photo Book in 2022.

Why did Pixieset Acquire Flothemes? Interview with the Founders