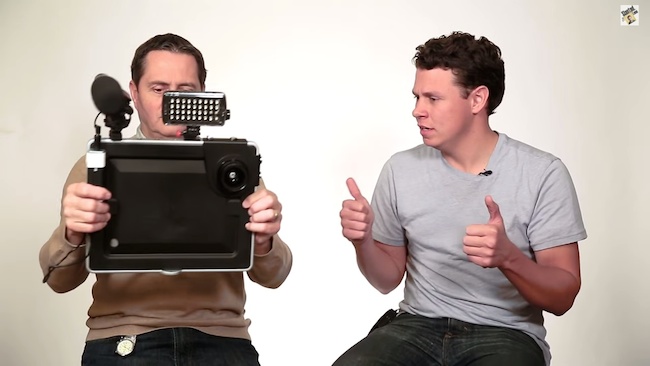 Many photographers make fun of people taking photos and videos with their iPads for good reason. iPads don’t have very good lenses, you can’t attach them to a tripod and the sound just isn’t that good when recording video. The Padcaster is a gadget that was built to overcome all those issues. In this video, the folks from The Slanted Lens talks a look at the Padcaster and its features to see if it is a good option to turn your iPad into a video production tool.

The Padcaster has multiple hotshoes on the top where you can attach, for example, a microphone or a LED panel. You can attach a wide-angle lens to your iPad, too. You also have multiple options for putting it on a standard tripod. The Padcaster started as a Kickstarter campaign and has recently been seen in the latest Apple commercial.

The iPad has one huge advantage over the traditional video – gear: Many people carry their iPads with them everywhere. This accessory could be interesting for video bloggers or people who just travel a lot and want something accessible to use on the go.

Of course,  your Apple iPad is not capable of delivering the same video quality you could expect from a modern DSLR, but if you’re just looking for a quick, run and gun video setup for interviews, this could be the right solution for you. Another great feature of this video rig is the huge screen of the iPad that can be used for accurate framing.

What do you think about this iPad rig? Would you consider using it for interviews and other productions yourself?

[via The Slanted Lens]

Lowepro Puts the Pro Roller Through a Hardcore Test