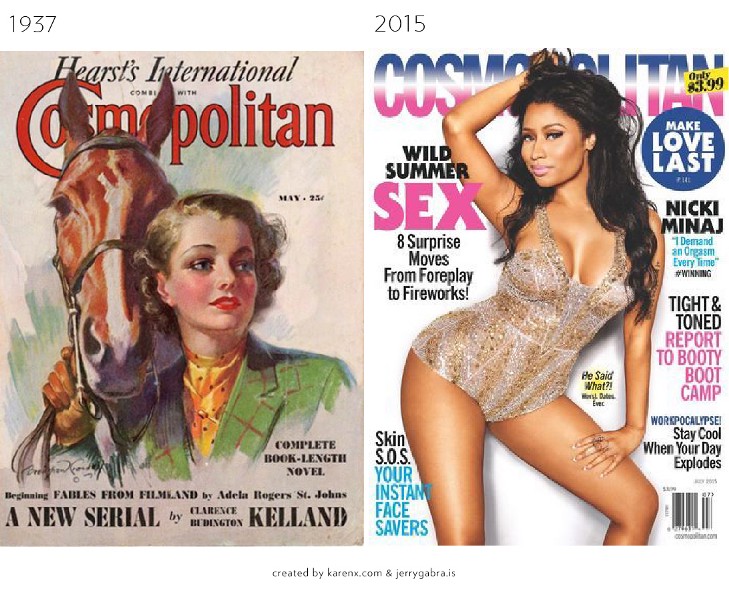 Then & Now: A Comparison of Magazine Covers Over The Last Century

Like little time capsules of history, magazine covers are a mirror of our culture and values. Their disposability and brief shelf life create an urgency to sell, especially in this digital age, where paper is becoming obsolete. As we stand in the checkout lines at the grocery store, racks of images and words vie for our attention, hoping to be visible enough for a last minute impulse buy. Headlines, scantily clad and Photoshopped women and celebrities peer out at us, trying to entice us to read further. Oh, how the world has changed and none more evident than a look at the evolution of magazine covers put together by Karen X. Cheng and Jerry Gabra.

[REWIND: THEN AND NOW | 19 PROFESSIONAL PHOTOGRAPHERS SHARE THEIR BEGINNINGS] 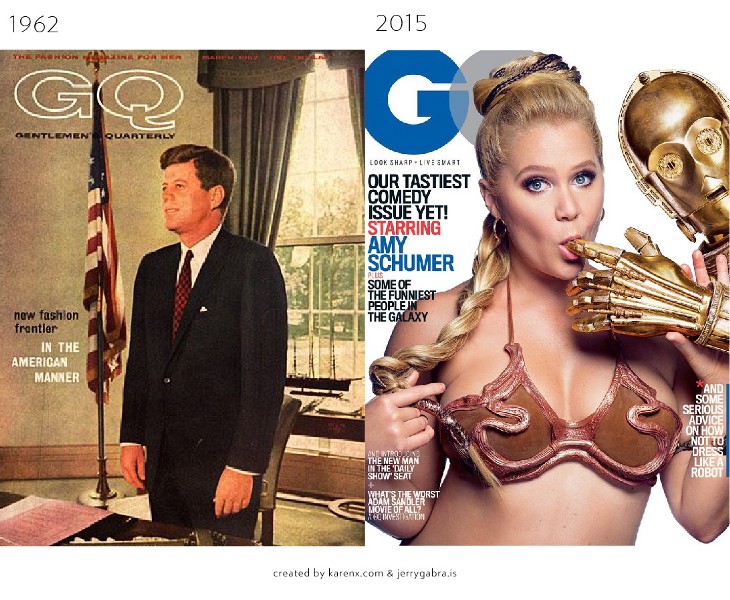 How far we’ve come. From a president and a simple headline to a bikini-clad celebrity embracing pop culture and sex, the reflection of our culture isn’t always a pretty one.  Role models of the past (from presidents and astronauts) meet the role models of the Millennials (the Kardashians and movie stars). Covers now appeal to a generation whose time and attention are divided, where ADHD is commonplace, and interest fleeting. Covers are now filled with text rich headlines telling you how to “look hot” and “lose weight FAST!”

Gone are the days where a teenager stayed home and sewed pretty dresses and made projects. Now, magazines like Seventeen appeal to getting boys to text you back, taking the “perfect selfie,” and encouraging celebrity crushes as evidenced by these vastly different Seventeen Magazine covers below. Trying to grab the attention of a generation of kids that have grown up in a fast-paced, information culture who want to differentiate themselves from their parents, covers have become cluttered and role models are now idols of a lesser kind. 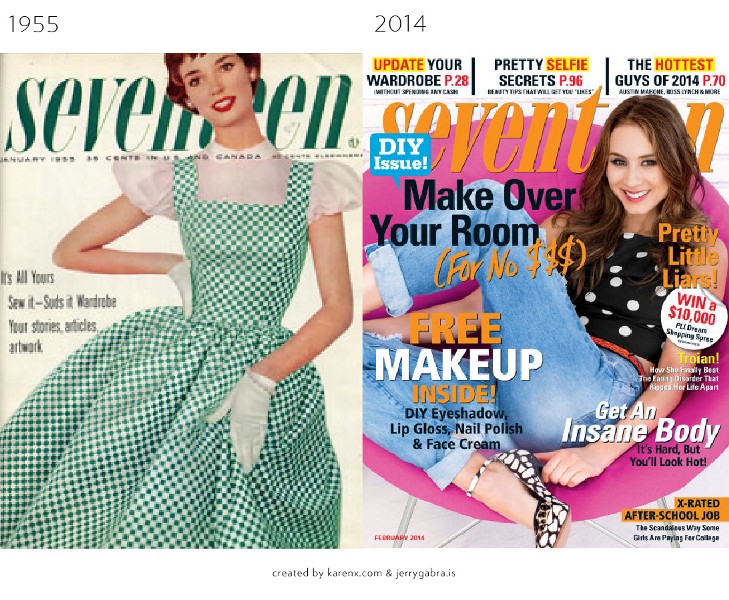 And if we aren’t bombarded with enough information throughout the day, copy has gotten more colorful, yelling their message to anyone that might hear. Do any of these stand out to you? Me, neither. That’s because we are OLD. 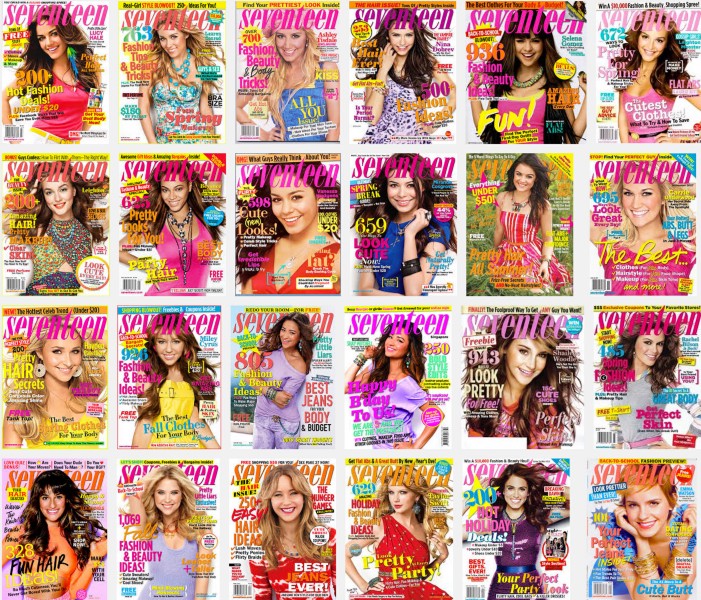 As women began to get a voice, we began to shed our clothes…and inhibitions. Who wants to read about horses, when you can read about “wild summer sex?”

Vogue’s covers have remained relatively classy – well, maybe not with their choice of cover models – but in terms of aesthetics and design. Like the rest, they’ve upped the text, but the look is still clean and uncluttered, which aligns with their target demographic, of course.  Look how far we’ve come… 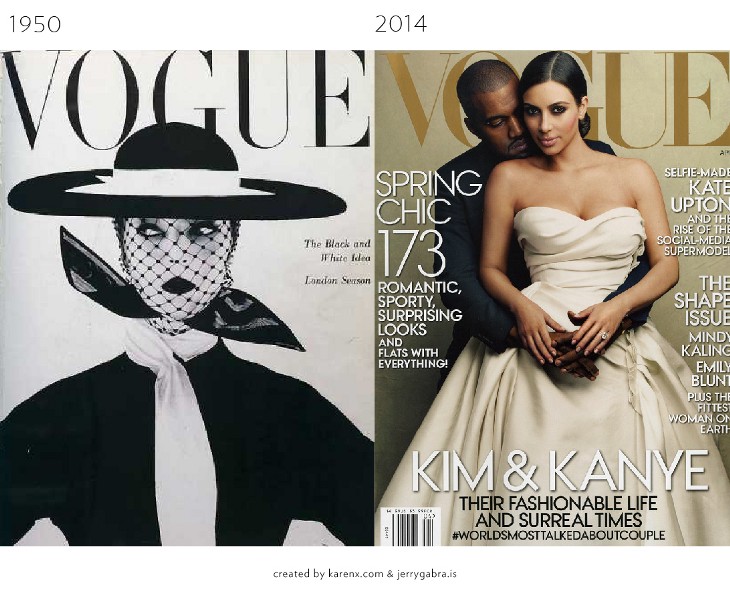 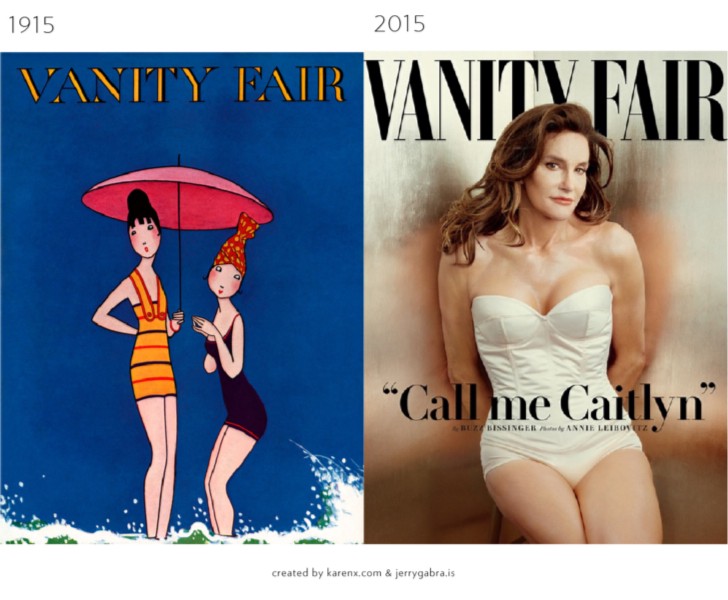 For the more intellectual set, covers remained similar throughout TIME, with a person-centric image. The recognizable red border was added in the 1930’s and remains unchanged. And some magazines, such as the New Yorker (seen below) haven’t changed one bit). 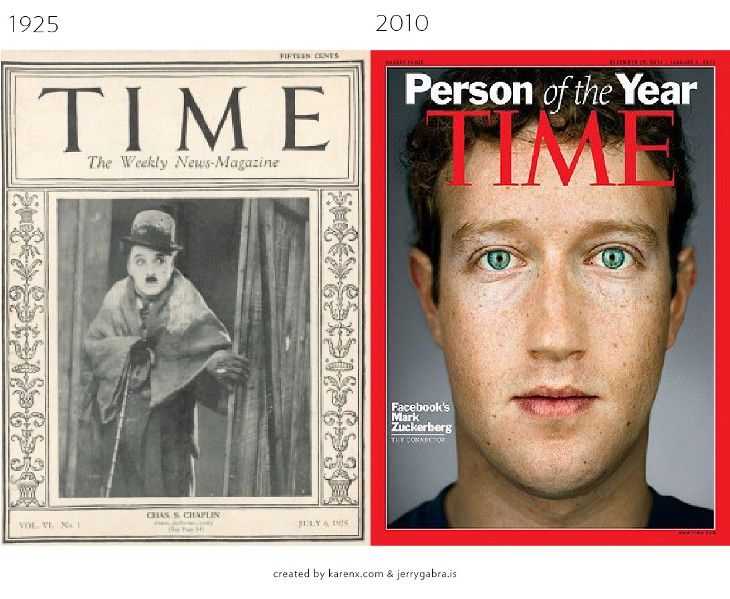 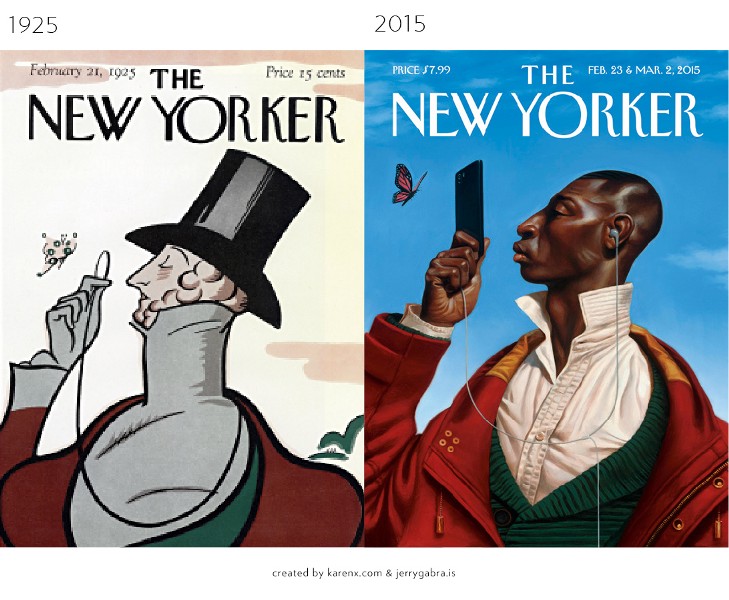 National Geographic moved from a text-centric publication to jaw-droppingly gorgeous images in the 70’s. 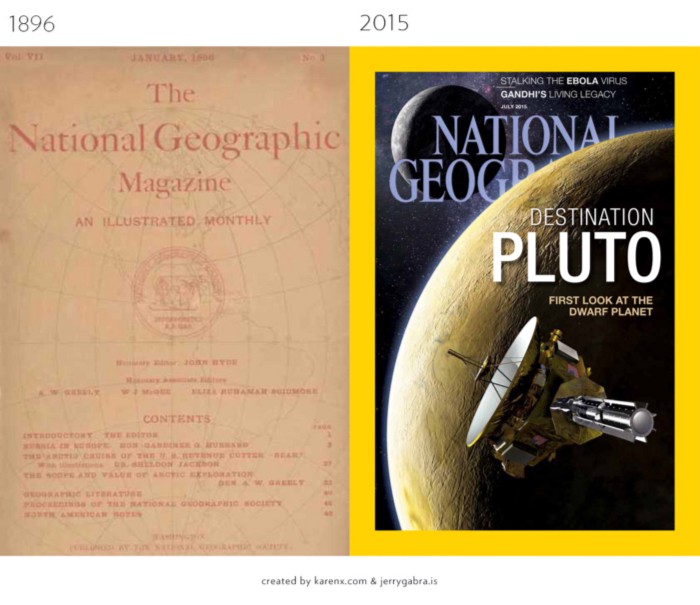 As society changes and evolves, magazines continue to reflect the world around us; from the good (more acceptance and open-mindedness), to the bad (over sexualization, short attention spans, poor role models). As Karen writes in her original post,

Not so long ago, black people couldn’t vote. Though they still face significant discrimination, they are also now idolized on magazine covers. As women have earned more rights over the years, they now take control of their sexuality. And Vanity Fair’s most iconic cover this year is a woman who used to identify as a man.

Credit: Magazine covers are copyright by their respective publications. Comparison images created by Karen X. Cheng and Jerry Gabra. If you have questions, email karenxcheng@gmail.com

How To Process HDR Images In Lightroom CC