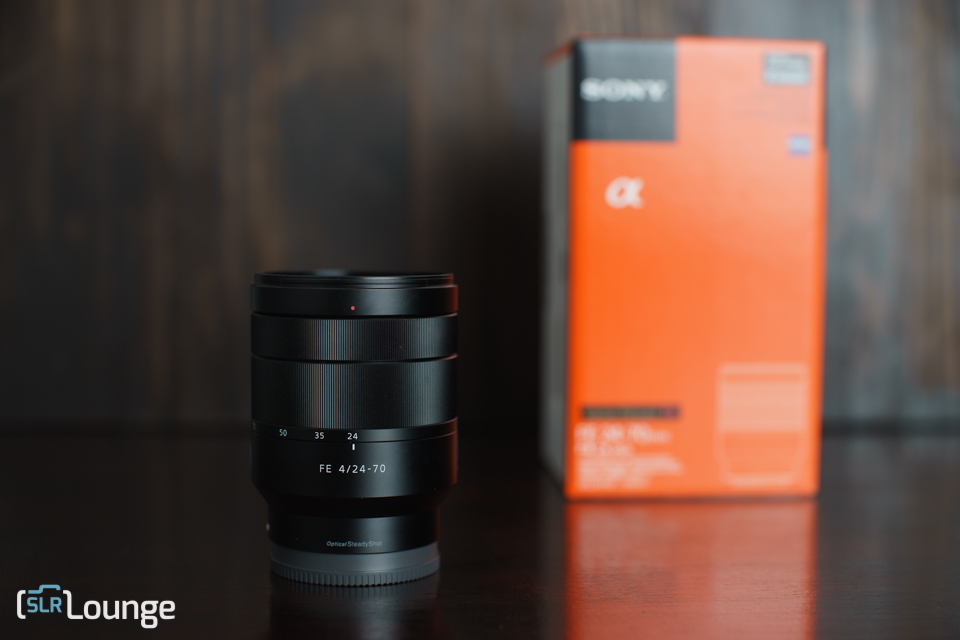 The standard A7 II kit comes with a pretty good 28-70mm kit lens. It has a variable aperture, but if you know how to work within its limitations, it will be a great performer for you. But there is also a FE 24-70mm F/4 lens on the market, so what should someone getting into the Sony E mount system do?

This post is meant to be an introduction of sorts to the two lenses, and their physical and handling differences. Optical performance, and such will be covered in a future post that will go into way more detail than this one.

In terms of size, the Zeiss 24-70mm F/4 ZA OSS is not all that much bigger than the 28-70mm kit lens that comes with the A7 II. It is bigger, but not so much so that you would notice it much. 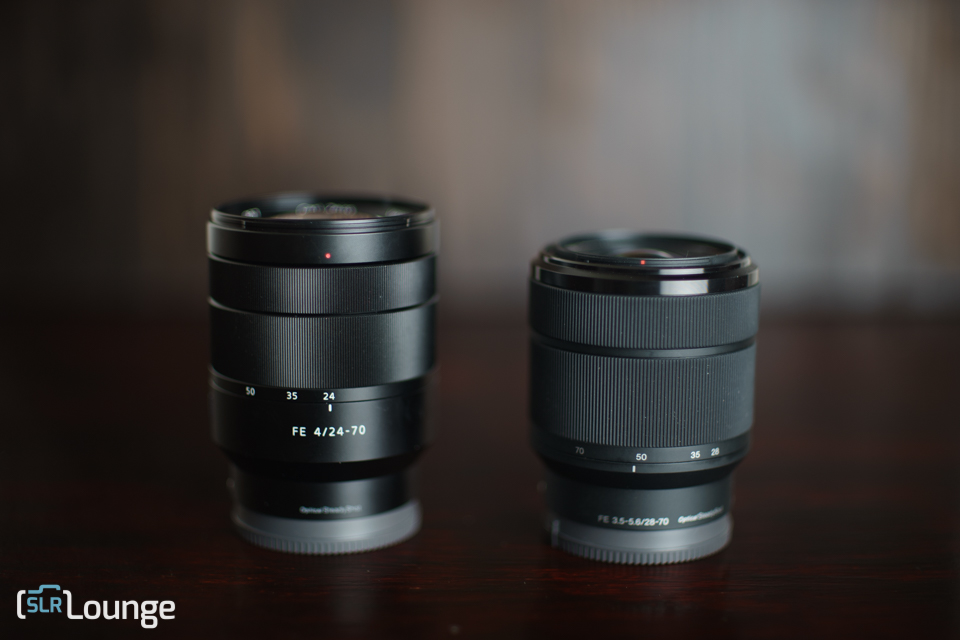 It is however, much sexier. While the kit lens is this sort of muddy grey/black color, the Zeiss 24-70mm is a jet black, and just looks great on an A7 body. The kit lens does have a larger zoom ring, and though it does not quite feel as nice turning as the Zeiss does (but that is a personal opinion and your mileage may very).

One major difference between these lenses is the size after zooming. The Kit lens’s front element does not move forward or backwards more than a cm or two throughout the entire range of the lens. The 24-70mm Zeiss on the other hand, has quite an extension on it, which may be a no no for some people. 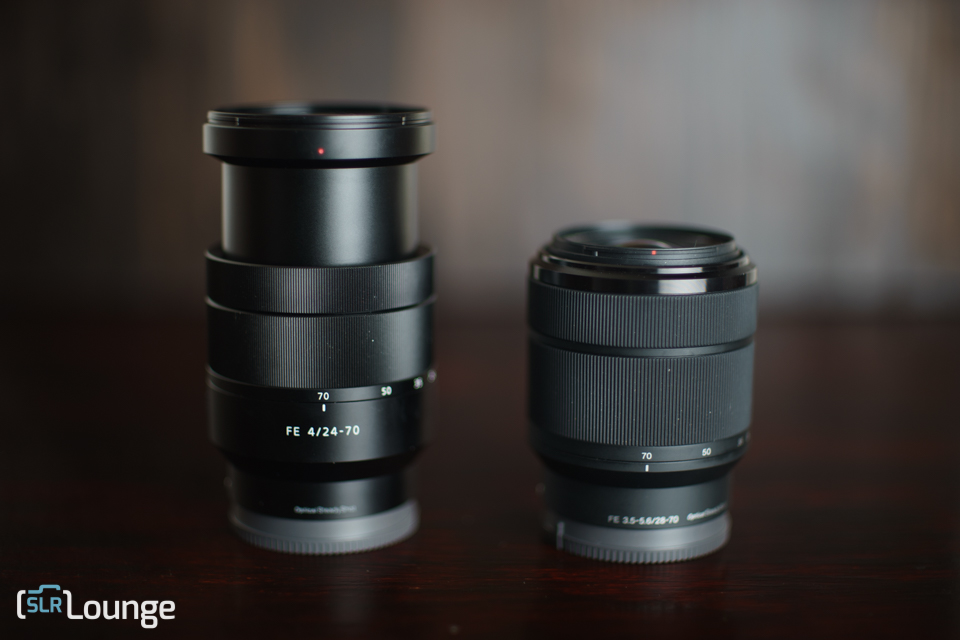 Personally, the less a lens extends/retracts during zooming the better. I think it looks cheap when a lens virtually doubles in length with an ugly black tube on the end of it. This Zeiss lens, however, is not cheap, coming in at about $1200.

You can also buy a really decent/good 24-70mm F/2.8 lens for that price in the DSLR realm, making a 24-70mm F/4 lens at the same price quite the proposition. I have not used the lens enough yet to really give much of an opinion on overall value, other than to say that so far, I am very happy with the lens, its build, and how it handles on the A7 II. 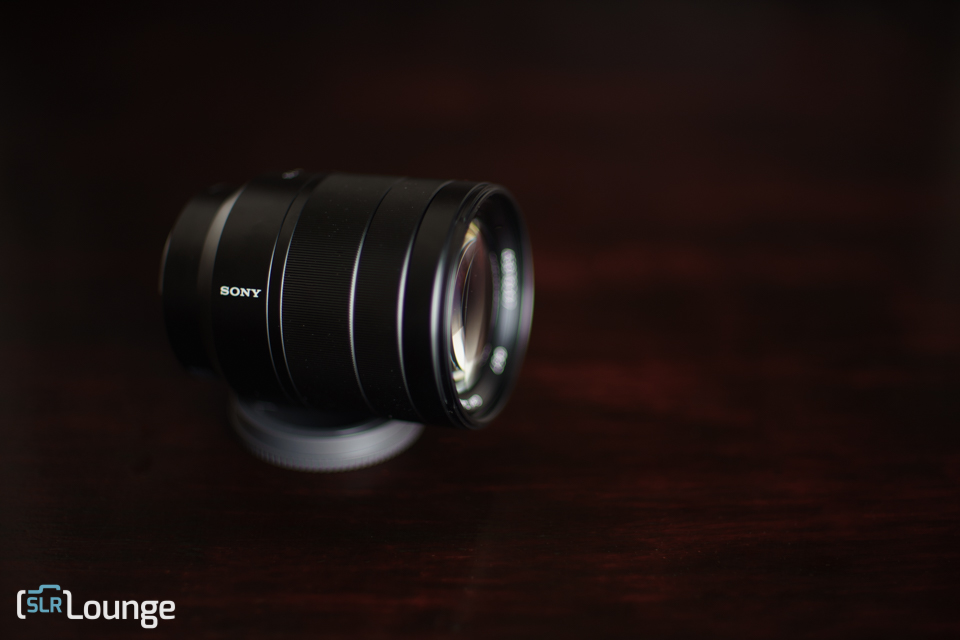 I would also say the same of the Kit lens though, for the most part. If you require the ability to shoot at a constant aperture, then the dilemma is simple. While the kit can only be a constant F/5.6, the Zeiss is a constant F/4, giving you more light.

That said, if you can work with a variable aperture or F/5.6, the kit may be the better choice in terms of saving your wallet for other things. Kit lenses notoriously get a bad rap, but I know people who have done amazing work with just kit lenses, so they are not to be discounted.

I have only had the 24-70mm a few days now, and have not had a chance to shoot much other than my kiddos goofing around. So I will not bore you with those shots, but I will say this, stay tuned for my next post on this comparison; it will have all the sample shots and optical performance thoughts your heart desires.

I guarantee you the Zeiss lens is better optically than the kit lens – I have seen it just in comparing various shots taken from each lens, but is it $700 better? On top of that, is it actually any better in the situation you need it for? Keep an eye out for the next piece of this review, it is sure to be interesting…