SLR Lounge > Photography News > News & Insight > A Harsh Rant On Working For Free By A Hollywood Writer | But Is He Right? 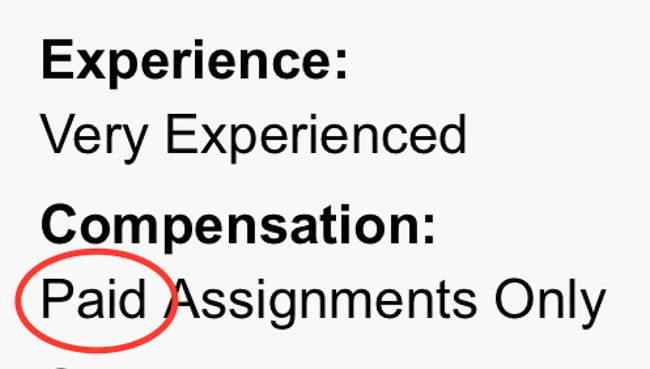 A Harsh Rant On Working For Free By A Hollywood Writer | But Is He Right?

Where do you stand on working for free? It seems there’s a bit of a divide on the topic and feelings on the subject are so intense, that it’s akin to picking a religion – a line in the sand is drawn, and whichever side you choose is going to meet with real conflict from the other.

It has been my experience, however, that those on the side in favor of never working for free are a bit more fierce about it. To them, the world of work and compensation for work is rather black and white, or, green rather. It would appear to many in that camp that the only type of compensation for their work is monetary. This is a sentiment shared, rather passionately by writer Harlan Ellison, as depicted here in this short excerpt from the film ‘Dreams With Sharp Teeth.’

Harlan is known for being outspoken about the things he believes in, whether that be copyright, or marching for his beliefs as he did in the 1965 Bloody Sunday March led by Martin Luther King Jr. In this clip, it’s about the former, and likely many of you share his sentiments. The idea of working for free is abhorrent to Ellison, and he makes many of the arguments as a writer that photographers make.

[RELATED: DOES WORKING FOR FREE EVER PAY OFF?]

There’s mention of how amateurs are undercutting the pros and how it’s in fact the amateurs who make it hard for the professionals because their willingness to work for free trains the public into thinking this is how it should be. He further goes on to challenge the value of publicity in return for work. Take a look at the short clip and see how you feel.

*Warning* This video is not censored and rather abundant in profanity.*

My introduction to Ellison was a few years ago when I read a vintage piece from Esquire Magazine said to be one of, if not the best magazine article the magazine had ever published. ‘Frank Sinatra Has A Cold’ is somewhat a profile of Sinatra, but there’s a short segment noting a minor altercation between him and Ellison. Granted, I still didn’t pay much attention to it until the person who sent me the piece told me about the scripts Ellison had done for shows like Star Trek and Hitchcock. Yet as much as I like Ellison, I disagree with his perspective.

Actually, let me clarify, I disagree that it’s so cut and dry. The value of working for free doesn’t have to be measured in coin. Ellison may not need the publicity as much as he needs the money, but he’s also already very established. In the quest to become established, working for free can be one of the best things you can do. There is value in publicity for most of us, but aside from that, depending on the situation, you may be able to learn something from the venture, or contribute something, and perhaps the gesture may carry its own weight in the form of good faith, to be redeemed later on.

[REWIND: Your Work Can’t Speak For Itself | Do You Know What Else You Need To Be Hired?]

I, and a number of successful people I know, granted most not in photography, have worked for free at some point in life. Worked hard for free, and for some, including myself, for months upon months, and the payoff was worth it. If you want to secure a spot in a business with high competition, even as a studio right hand, the offer to work for free may set you apart and get you on a shortlist. It can be a chance to prove yourself that the other side may not have gotten. Working for free in some scenarios also often shows that you are probably very serious, and since it’s your time on the line, won’t waste that of others.

I can hear some of you saying, “Ok Kish, but we are talking about shooting for free,” to which I would tell you the same applies. Like religion, it requires a leap of faith. Obviously, you’ve got to know when you’re being taken advantage of, or when there’s really nothing in it for you, and when to cut your losses. But to draw a hard line that you’ll never work for free, and that money is the only value to be had from any venture, well, you may giving and not selling product, but selling yourself short.

The Ultimate Guide To Motion Timelapse Of The Milky Way | Tutorial