SLR Lounge > Photography > ‘Hackintosh’ vs MacPro – Is it Worth Trying To DIY Your Own Mac for Photo/Video Work? 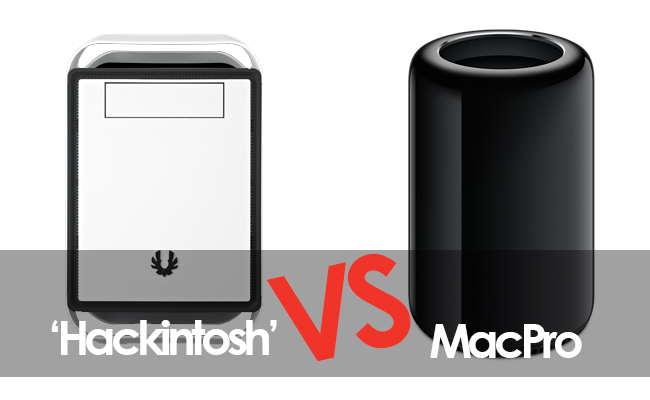 ‘Hackintosh’ vs MacPro – Is it Worth Trying To DIY Your Own Mac for Photo/Video Work?

I think just about every creative professional out there has looked at those new MacPro machines and after deciding they look like a trash can, have lusted after them, even a mainly pro PC guy like myself.

Having just spent about $800 (plus parts I already owned) on a new custom editing PC for myself, I started to wonder if building a ‘hackintosh’ could get me similar performance to one of these new MacPros. Just a quick tech lesson, a “Hackintosh” is when you install OSX on a custom built PC. So, I just spent money on that new custom PC, and didn’t have the money to do it myself, so I decided to check out YouTube and see what other individuals results have been.

I think it is safe to say here that in the case of the Hackintosh shown above, this user was able to get similar performance for a fraction of the cost. Plus, switch out that Nvidia Titan for something like a Nvidia GTX 770, which is around $300-$400, and you shave another $600-$700 off that final price. So for essentially $1300, you could build a Hackintosh that is capable of matching – in most respects – the $2999 MacPro.

[REWIND: My Custom Photo/Editing PC for Under $800]

The other part to this is that you can’t just turn any custom PC into a Hackintosh, parts have to be carefully selected and even then the install can be a real pain in the neck. If you are the type to worry about installing updates to Windows, then this is probably not something you will even want to consider doing on your own.

Her are some more great Hackintosh videos…

So what is the verdict? Well, it is a little complicated. If you are a photographer who only takes stills and edits in Lightroom & Photoshop than I would say this is not really something worth doing. In fact, I would say that both a Hackintosh (at least one like the one in the video) and MacPro are way overkill for those purposes.

But, if you are a photographer that also works video into your services, than this could seriously be something that you might want to consider. Assuming that you feel like you have the tech know how, or at the least can follow detailed instructions via YouTube videos without needing much help. I mean $1300 is much easier to swallow than $2999 – that is money you would put towards a new lens or camera body. Just for example, for $1699 you could buy yourself a brand new Canon 50mm F/1.2L.

The other aspect to consider is that if anything goes wrong, which is notorious on Hackintosh systems, you can’t take it to Apple for support. The buck ends with you, so if anything goes haywire you are the one who needs to fix it. This could be a huge negative for anyone thinking of using a hackintosh for professional purposes.

*As has been noted in the comments, there is some debate over whether or not this is even legal to do. If you decide to go this route make sure to educate yourself on the issue and come to a conclusion on your own.*

What are your thoughts on the matter? Do you feel that the Hackintosh (the one in this video anyways) is an acceptable alternative to the uberexpensive MacPro? Leave a comment below and let’s discuss!

Portrait Lighting: How to Position a Beauty Dish for Beautiful Skin