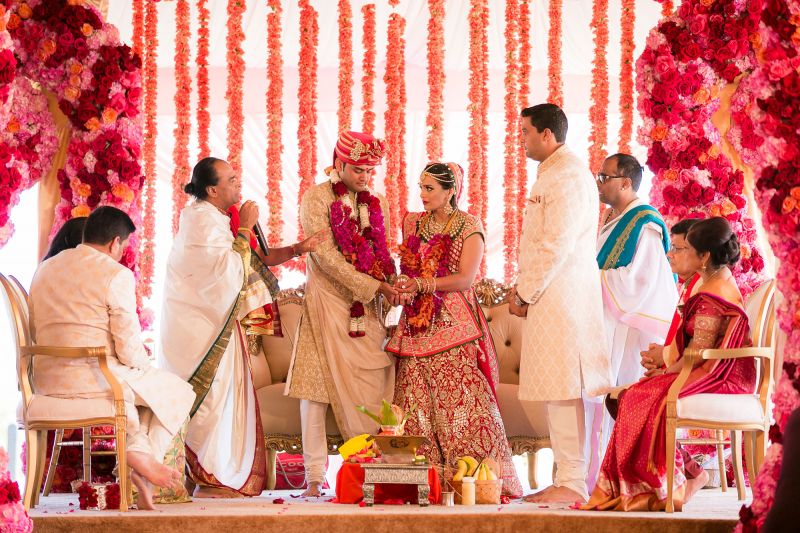 Immediately following the Baraat, the two families (bride and groom) will come together and the bride’s mother will greet the groom. The peculiarities of the exchange will vary, but you’ll need to be in the action to capture it. You may even need to politely ask people to move if they’re blocking your shots. Next, as part of the Milni, male family members will exchange garlands, and they often physically lift each other up as a fun challenge to see who can lift the other first.

The groom will then join both sets of parents on stage (mandap) to begin the ceremonial blessing, or Ganesha Pooja. The bride will likely not enter the area for several minutes while the blessing is under way.

Brides may either walk under a chaadar or be carried in on a palki. Like the groom’s Baraat, the bride’s entrance will vary based on the bride’s preferences. Regardless, positioning for shooters during the bride’s entrance does not vary much from traditional western weddings as discussed earlier in this chapter.

The giving away of the bride, or Kanyadaan, involves the joining of hands over a ceremonial coconut. Often, the coconut will have been used in pre-wedding ceremonies and is a symbolic part of the marriage. Again, shooter positions and movement will not vary much from other ceremonies.

The holy fire plays an important role, and you’ll need to capture images of the fire as it is used throughout the ceremony. Remember to tell the full story and capture wide, medium, and tight shots. This will come in handy when preparing album spreads or wall art.

The rice offering allows family members to show their support as they offer rice to holy fire to bless the marriage. Connectedness is important as the family members join hands to offer the rice and hug one another before moving on.

Similar to a ring in a ring exchange, the mangalsutra is a necklace that the groom will tie around the bride’s neck to symbolize that she is a married woman. It’s important to position each shooter ahead of time as the action moves fast and ends quickly. You will need to capture the groom tying the necklace as well as the reaction shots of family on the mandap.

For this part of the ceremony, the bride and groom will recite vows based in Hindu tradition, and between each vow, they will kick a small stone (or betel nut) off a pile of rice. Rather than kicking the stone/nut, they might just briefly place their big toe on top of it. Use a wide angle zoom lens to capture multiple perspectives as this part of the ceremony unfolds.

During the Kansar, or exchange of sweets, the groom will feed his bride sweets, a symbolic gesture to represent the couple sharing their first meal.

We recommend covering this with the lead and second shooters standing in a stacked position, one with a wide angle (24-70mm) and the other with a tighter angle (70-200mm).

There will be plenty to capture during the blessings as the bride and groom touch their parents’ feet or embrace in a hug to show respect before receiving blessings and concluding the ceremony.

Unlike in other cultural ceremonies, there’s a good chance the groom’s shoes will have been stolen by members of the bride’s family. The groom will have removed his shoes earlier in the ceremony, during the milni, because shoes are not allowed on the mandap. The bride’s family members steal the shoes to earn a reward for returning them. It’s tradition! This negotiation to return the shoes will usually precede the recessional, which is then covered as discussed in earlier chapters.

Friends and family, specifically the bride’s parents, will gather with the couple to wish them farewell as they depart the ceremony site. This moment symbolizes the bride starting a new life and leaving her family to go live with her new husband. Vidaais tend to be quite emotional and offer photographers a great opportunity to capture emotional moments as the couple and guests part ways.

Which Gear To Use When Recreating Golden Hour