SLR Lounge > Best Photographers > Features > WedPics | The Wedding App You Wish You Thought Of, Or That No One Did 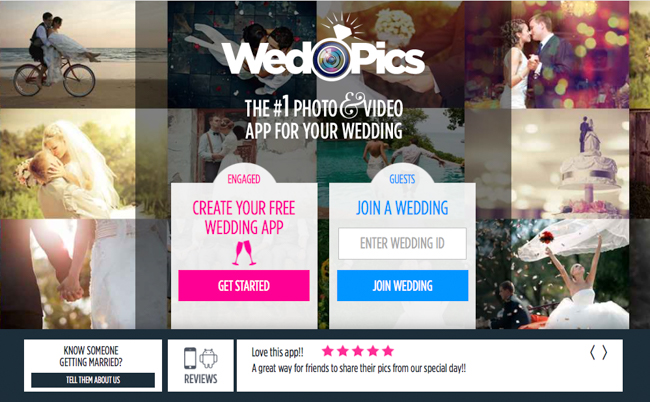 WedPics | The Wedding App You Wish You Thought Of, Or That No One Did

There’s a general love/hate relationship that those who make their living with photography have regarding technology. In one breath, we always want our gear to advance, and perform better that the last iteration, and in every conceivable way. In another, we hold the fear that we can’t keep up with the coming change in industry that is on the front doorstep, and that advancing tech makes it somewhat easier to do our jobs – so more people do it, and the value drops, along with paid work. It pushes the working photog to find new ways to monetize, new reasons to be valued, and changing how we view our work. Well, an app is out that might make all of that a little bit harder, especially for wedding photographers. It’s called WedPics.

If you’ve attended a wedding in the last 5 years, you’ll have noticed that the guests tend to see the ceremony and the reception through an LCD screen, rather than with their own eyes. Everyone’s got a phone camera or some other camera, and everyone’s using it. Nevermind that 95% of those will never be looked at again, and the other 5% will be glanced at briefly, everyone wants to capture the day’s events, regardless of the professional who has been hired to shoot. WedPics is a social photo sharing app that lets anyone involved in the wedding to share their handiwork with the bride and groom, and everyone else, instead of the couple having to chase down attendees for their photos.

It’s available for iOS and Android, and has a desktop interface for added control. It is entirely free with unlimited guests and photos, allows for comments, multiple albums, allows download of the high res versions of the images without cost, and gives a realtime photo feed.

[REWIND: How To Package & Mail Your Prints, By Some Of The Best In The Business]

It’s easy to see the appeal; all the photos will be different, someone may catch moments neither the others nor the pro did, they are likely to be more personal, and offer numerous perspectives on the day. Further than that, it’s instant – no waiting around for weeks to get the images from the wedding photographer. What may not be so easy to see, since it happens behind the scenes, is just how popular this sort of thing is, especially this company, and how fast they’re growing.

TechCrunch recently divulged a few details about the business end of WedPics, and the numbers are astonishing. In its Series B, funding the company has closed on $4.25 million with an expected $5 million at the finish. This is even more surprising given that the company isn’t based in Silicon Valley or secondary hub Atlanta, but in Raleigh, NC. They are signing up 25,000-30,000 new brides a month. TechCrunch quotes CEO Justin Miller as stating the company was hosting over 6,000 weddings a weekend this summer – grasp that, if you can, with a wedding acquisition cost of only $2!

From some of the comments, it seems some wedding photographers are not happy about a service like this as they feel it will cut into the demand for their own service. I don’t really see this as something that replaces the need for a professional, not yet anyway, and it may actually be a good idea to recommend it to your clients. What say you?

Astro-Landscape Portraiture: How To Create Portraits Under The Stars - Part 1