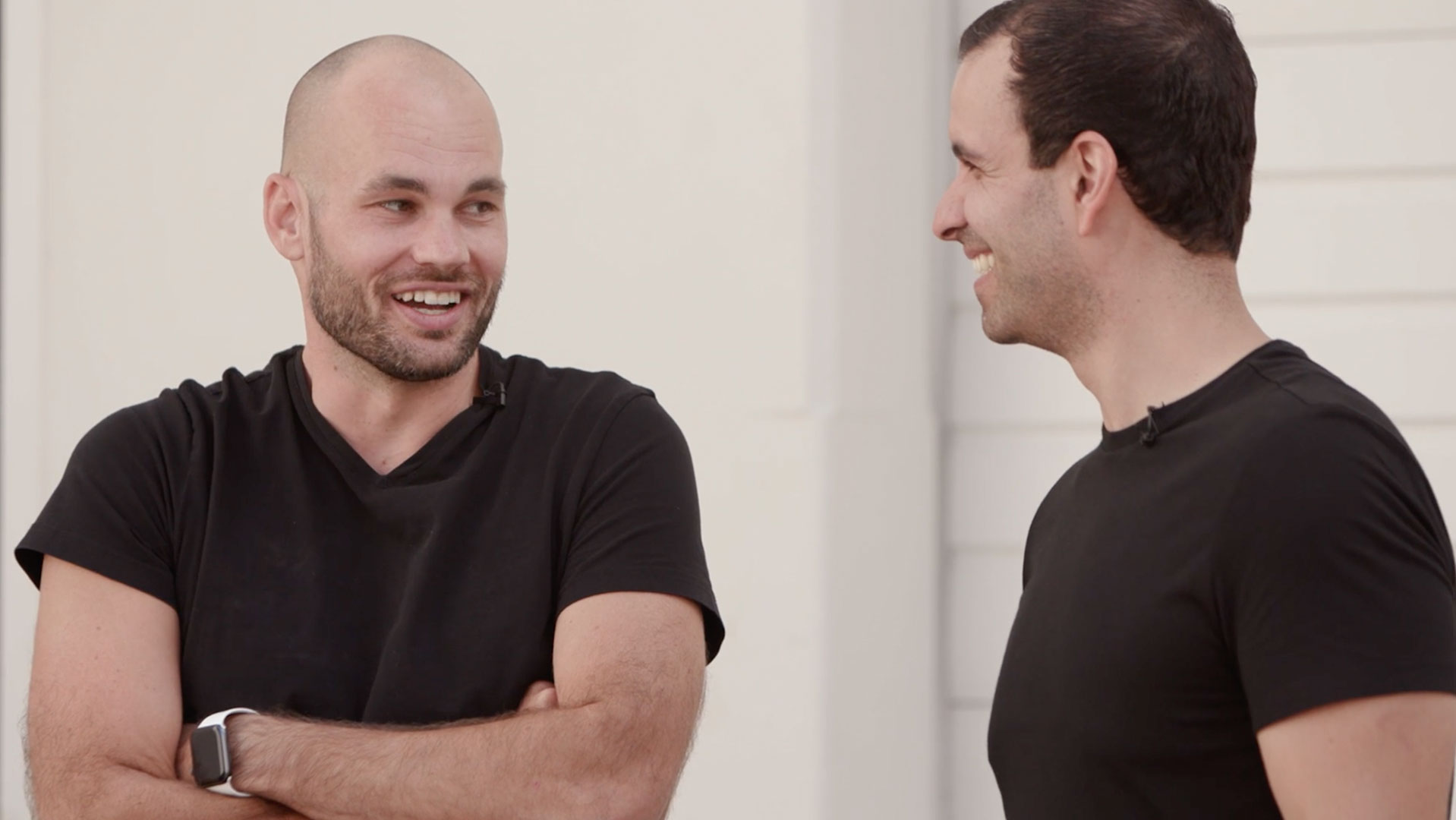 About a month or so ago, I traveled to Puerto Rico to visit Lee Morris and Patrick Hall from Fstoppers and was surprise attacked by a photography portrait challenge on their home turf. I thought it would only be fitting to do the exact same when he came to sunny Southern California to visit us in the studio.

A couple of weeks ago we put up the final images to see your thoughts on who won and to see if you could tell the who shot what. You can see for yourself what the community thought should be crowned the winner by watching the full challenge video below. A special thanks to Profoto for sponsoring this video.

Fun and games aside, the biggest takeaway for me was that I could still have my confidence rocked. Time constraints along with Lee’s trash-talking truly got to my head, so much so that I walked away knowing I lost from the competition. One thing saved me, in each scene when I lost confidence in what I was trying, I fell back onto the lighting principles I already knew. It goes to the adage, under pressure, you go back to what you’ve practiced and what you know. It was a truly humbling experience. 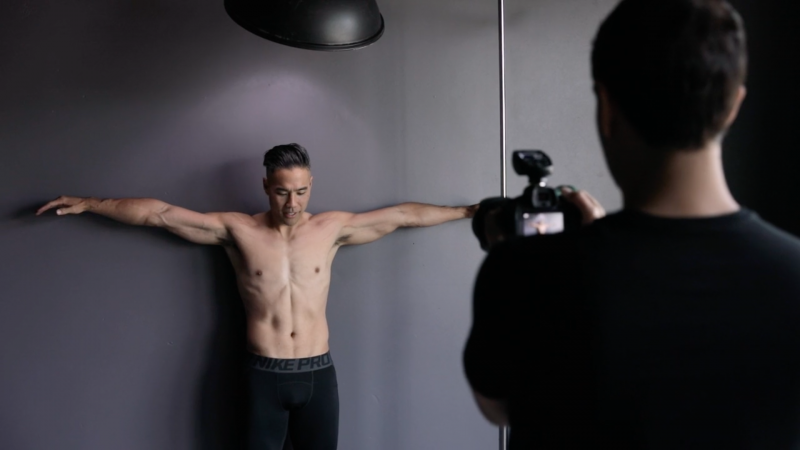 After a failed first attempt at getting a shot that conceptually worked in my mind (see above image), I resorted to a last-ditch effort to salvage the scene with a simple lighting setup with only 3 minutes left on the clock. Towards the end of my time limit is when Lee’s trash-talking started getting to me which ended up derailing my original concept. I opted for one Profoto B10 with the 3′ RFi Octa Softbox to get a nice wrapping light around Justin’s upper body and torso to really give a stronger definition of the muscles by creating clear highlights and shadows. The window light, coming from camera right, added a bit of fill which took away some of the drama created from the strobe and is probably something I would eliminate if I were to re-shoot this image. Here is my final image: 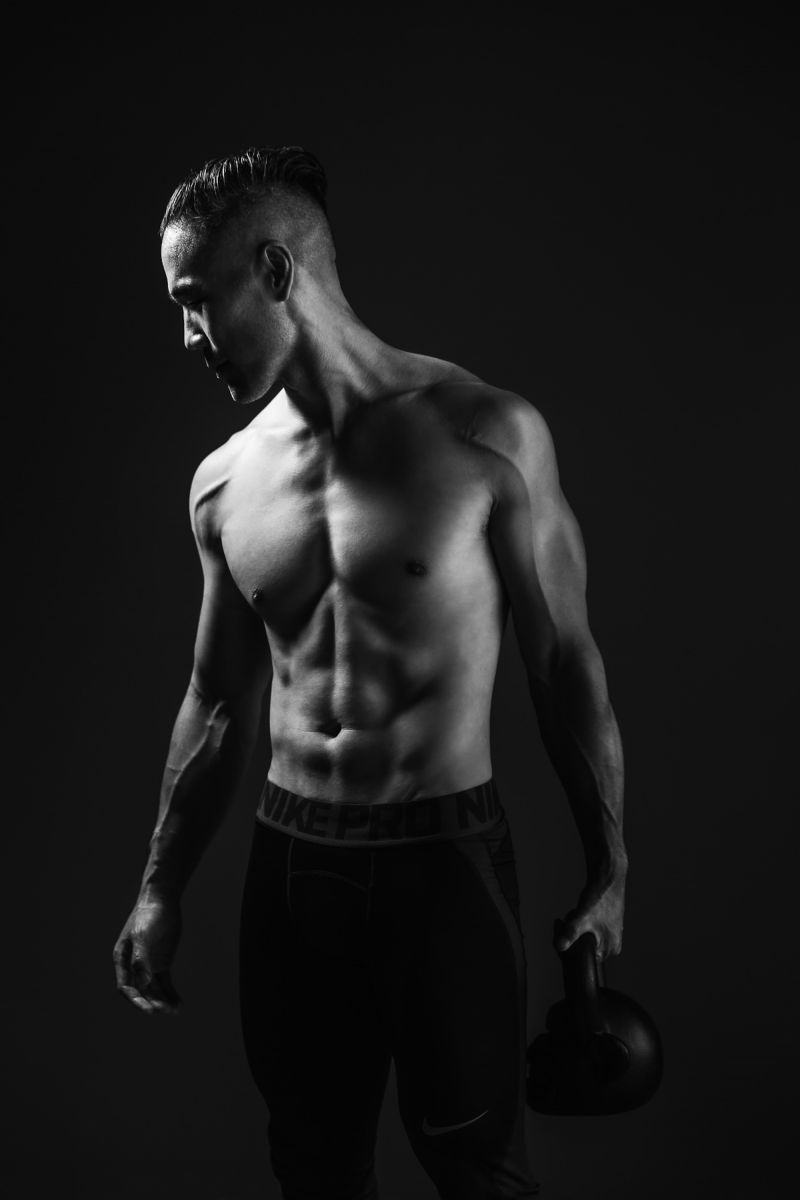 Lee originally intended to make this portrait black and white after seeing that we were shooting against a purple wall. After taking his final shot into post however, he changed his mind and kept it in full color. I’ll be honest, I really dug Lee’s pose for Justin here, and he had a solid light setup. The fill light coming from the window on the right was a nice addition to the scene as well. An excellent reminder that one light source, even without modifiers, is more than enough to make a compelling photograph. Although he had some trouble with the EOS-R, he ended up arriving at this final image: 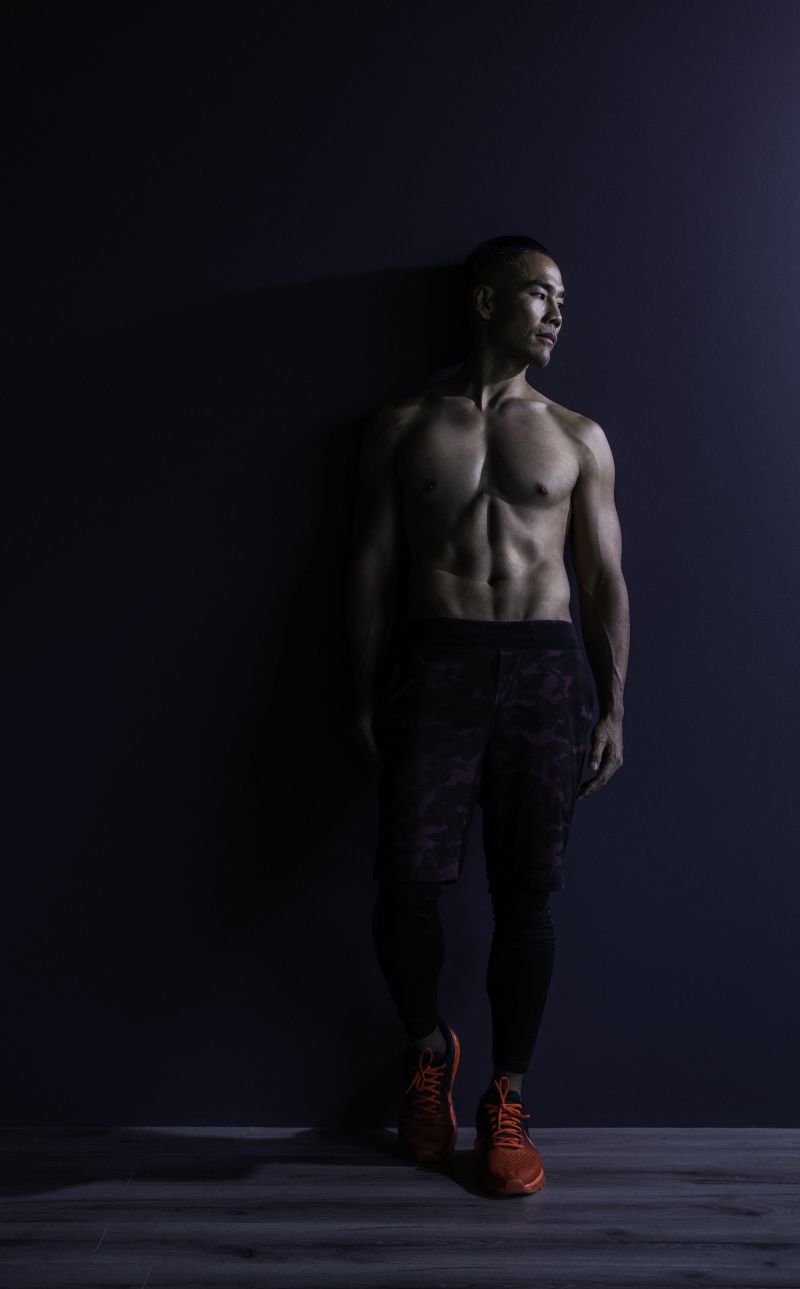 Out of 620 votes from our community, 76% of voters chose my image as the winner of this set. To Lee’s disappointment and my pure astonishment, I came out top with an image I originally had not intended for this scene. Let’s move on to our next scene. 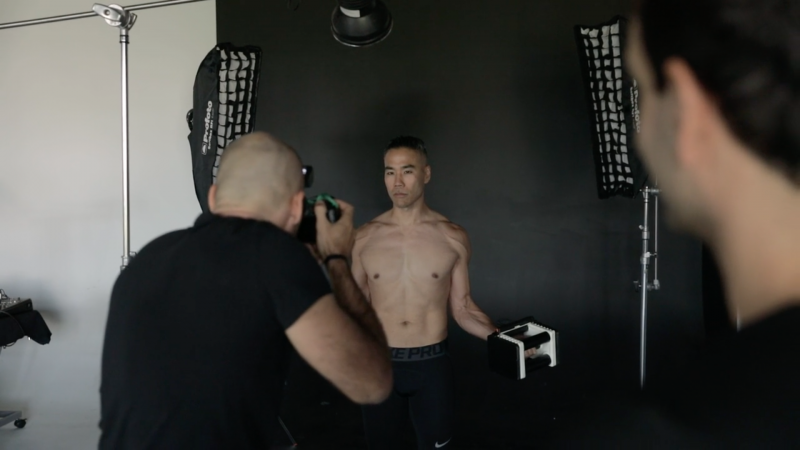 Now, this is where things get a little messy. At this point, Lee’s trash-talking has reached new heights, so much so that I think he should start a college-level course. You ever get to that point when you are so stressed during a shoot that you forget virtually everything? I’ve done several fitness photography tutorials and shoots that have given me a basic understanding of what lighting would work for this scene, and because I was hitting a mental roadblock, AKA Lee in my head, I resorted to this 2 light setup with 2 Profoto Stripboxes angled towards Justin placed slightly behind his body. For more light control, I added Softgrids to both lights to really define the shadows and highlights. Some may recognize this technique from a tutorial we created a while back for Profoto featuring Justin…but I will neither confirm or deny the similarities. Here is the final image: 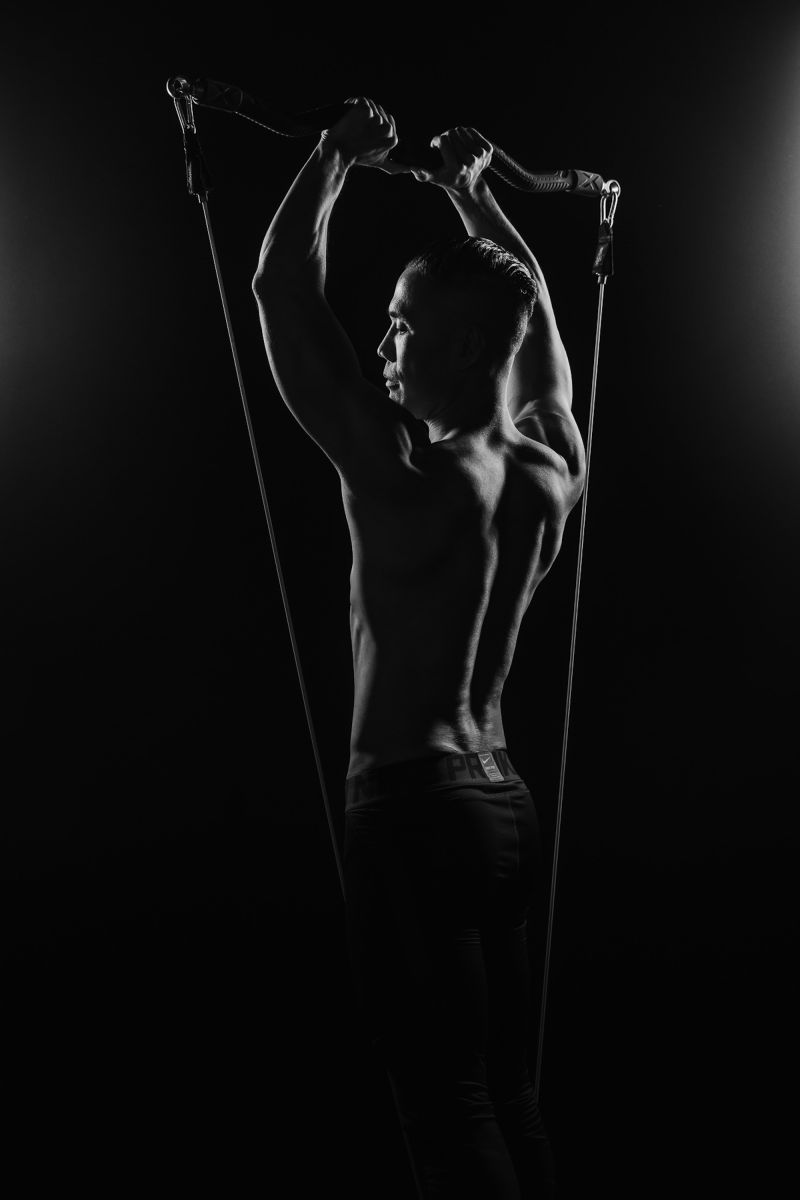 For ease of setup, Lee opted to keep my strip boxes exactly where I had them and added in an overhead B10 with an OCF Reflector Dish to create a dramatic portrait of Justin. He was aiming for that key overhead light to be a dimly lit hard light source to bring out the muscle definition without creating too many highlights. That light placement creates a nice catchlight in the eyes but you have to make sure you aren’t overpowering the scene with all the power from the B10 so raising it up and angling it is really going to give you this final look: 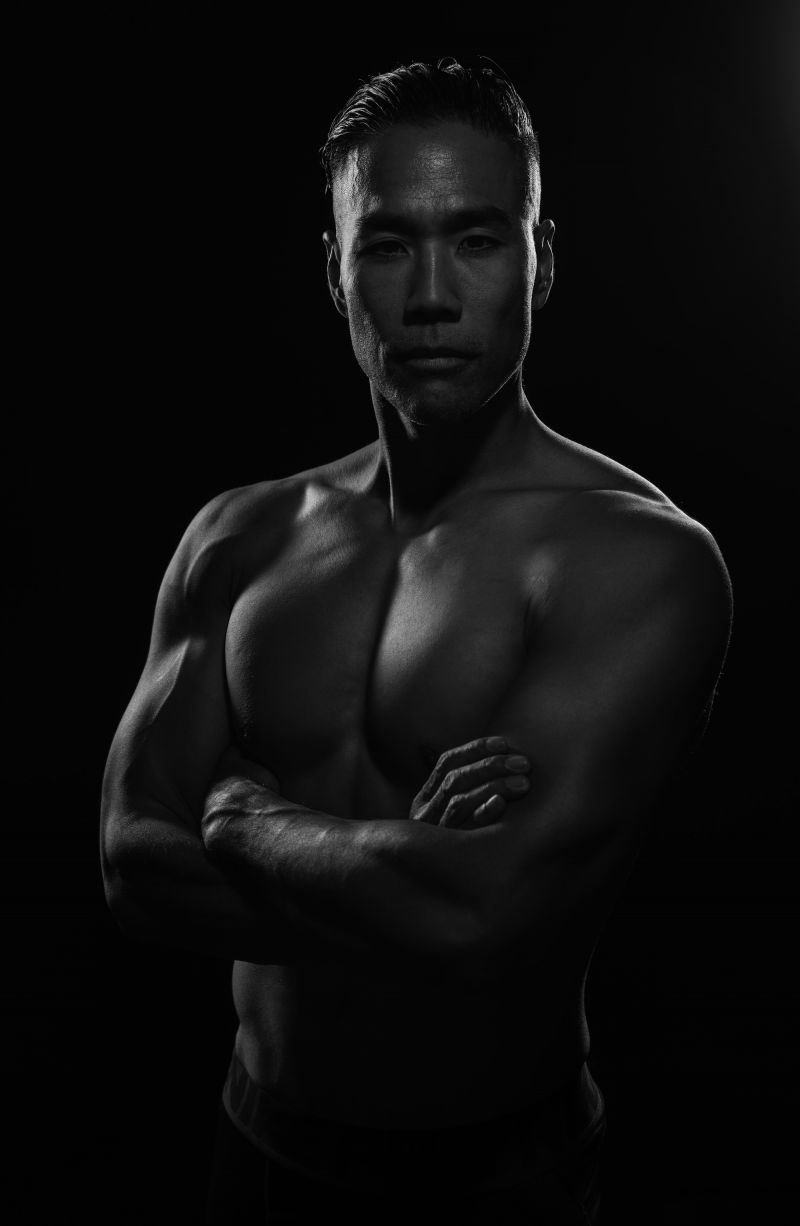 Out of 575 total votes, 60% of voters chose my image over Lee’s, AGAIN. We had one last scene to see who really takes the cake. 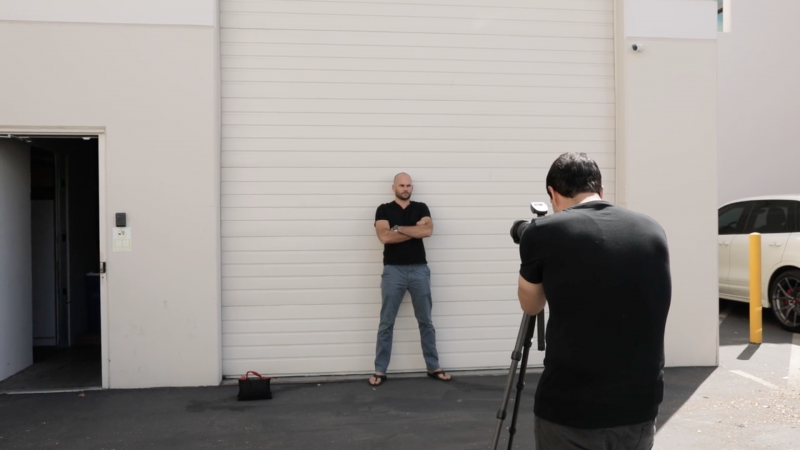 The back of our studio, as some of you have seen in our past tutorials, isn’t the prettiest spot. It is stacked with warehouse garage doors, really plain-looking walls and a whole lot of asphalt. I personally am used to shooting back here at night when all of the daylight is gone and I can kill most of my ambient light, but this was a completely different scenario.

My first thought was to use the texture and pattern of the garage door as part of my photograph. I used a CTB (color temperature blue) gel on the B1 just off to camera-right to light up the door and add a pop of color into the scene. I added one more just to the right of it pointed more towards Justin’s shoulder to create that same blue-gelled effect on his body. I wanted to create something a little more dramatic so I cut down my ambient light by stopping down to f/16 and added another B1 on camera-left with a CTO gel (color temperature orange) to rake across Justin’s back to really chisel out and define the muscles. This is a great technique to reveal shadow and highlight definition for fitness photography. Here is the final shot with a bit of dodging and burning in post to really bring out that definition: 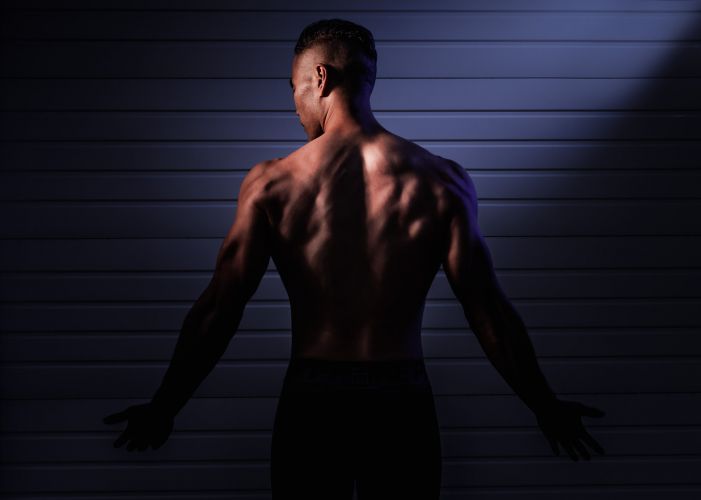 Inspired by the lines of the buildings, Lee chose to veer away from the garage doors and shoot up towards the sky. It was a classic sunny day in Orange County and the blue sky and clouds actually made for a decent backdrop, so I don’t blame him for opting for this instead of walls that surrounded us. He used 2 B10’s, one as a backlight with a Telezoom Reflector to make Justin pop off the background buildings, and one as a key light with a Zoom Reflector to add some depth and definition to his face. He is really pushing the power of these strobes here since we are shooting in broad daylight and trying to overpower the sunlight. Here is his final image: 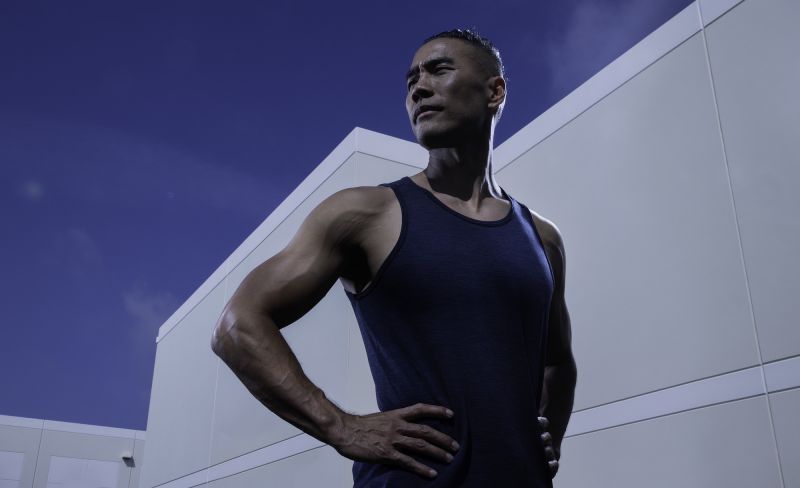 72% percent of you chose my image over Lee’s which means… I won? Wait, what?!

I literally set Lee up to fail here, yet despite that, I feel like I almost lost anyway. But, sweet victory is mine and Lee has now lost two photography battles to me, should we make it a third?

What is even more hilarious to me is that after we filmed the reveal, Lee went on to film an episode of Community Critique featuring male fitness portraits on the Fstoppers YouTube channel. He asked photographer Kenneth Bradshaw his take on all 6 images and … well, see what he said to say in the introduction to the episode here:

Even after shooting for over a decade, there is still so much potential to learn and grow as an artist and this challenge definitely taught me that. When you’re out on a shoot and you get stressed, I hope you get brought back to this challenge video and remember not to get defeated by the pressure and setbacks you are faced with, but to try and overcome obstacles with a solid foundation of knowledge of lighting, posing, and photography. All of your shoots may not be your most creative, but I hope this reminds you that there is always something you can rely on to create a clean and consistent outcome: your experience and knowledge.

Fortunately, I had just filmed Lighting 3 and Lighting 4, so I was well-practiced in my lighting techniques ;) You can check out Lighting 3 on pre-sale now for a limited time – it covers advanced off-camera flash techniques every portrait photographer should know!