SLR Lounge > Workshops > On Board vs. Hot Shoe Flash 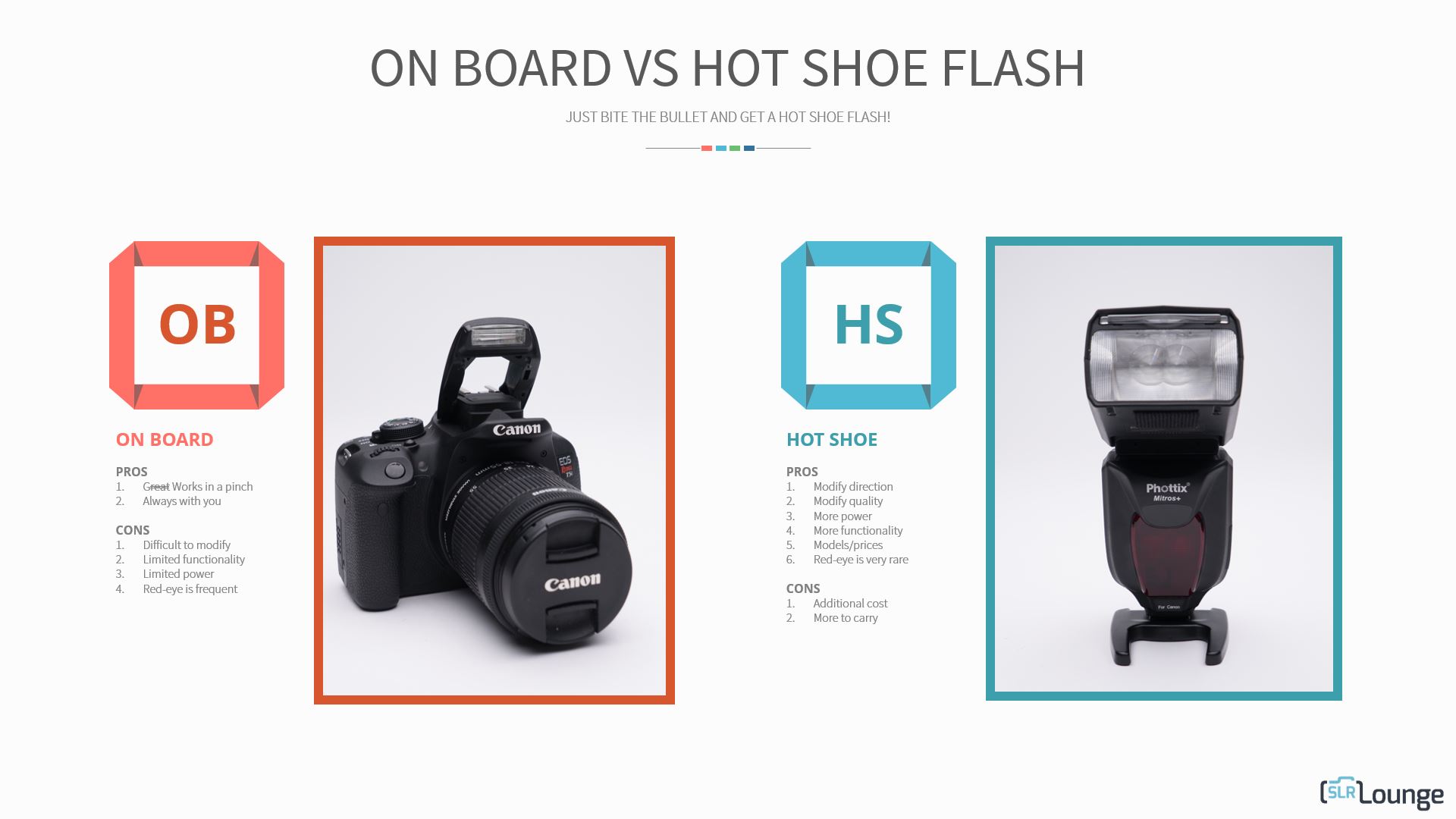 Lighting 101: On Board vs. Hot Shoe Flash

On Board vs. Hot Shoe Flash | Transcription

We’re going to take this from the top with on board vs. hot shoe flash? Why? Because, well, I need you all go go out and buy a hot shoe flash if you don’t already have one. You can watch this entire course to figure out which hot shoe flash you want. That’s fine, great, and dandy, but you’re eventually going to need one because all the techniques that we’re going to be teaching you really are done with a hot shoe flash. Let’s move on and say why.

Let’s talk first about onboard flash. This is the Rebel T5i. This is the same camera that we used for the Photography 101 workshop. Now the onboard flash is this guy that’s just built into the camera. To get to it I’m going to press this little flash button, and there it is. What are the pros of this tiny little flash? Well, there’s kind of only 2. Number 1, that it’s great, and look I scratched that? See it? There’s a scratch there. No, it’s not great. It works if you’re in a pinch. If you have absolutely no choice and you just need to add flash, then yes this will work and there is some limited flash functionality there, but the only other pro to it is that it’s basically always with you. It’s built into the camera so it goes everywhere you go.

On the con side of this, it’s extremely difficult to modify. Modify in every sense of the word. It’s difficult to control the direction of light. It’s difficult to control the amount, to control advanced features, to control color. All of these things are, it’s just difficult to modify. Con number 2 is that it also has limited functionality. We don’t have all the advanced features, like rear curtain sync and so forth, and that’s really going to depend on which camera body you have. That will tell, basically, what features are built into this onboard flash. In general though you’re not going to get the features that you would in a hot shoe flash. All right. Number 3, it has limited power. Look at how tiny this little guy is. Look at this tiny little guy. Even compared to this flash, which we always talk about the hot shoe flash head as being small and we need to modify it, look at this guy. This guy’s tiny in comparison to this guy. Okay? It’s a very small light, and it has very limited overall power.

Lastly, you’re going to have a lot of red eye when you’re shooting with your onboard flash. Why? Because the flash is directly above the lens, and it’s very close to the lens. This light is basically going directly into the eye at the same angle that you’re firing from. You’re going to get a lot more red eye with an onboard flash than you will with hot shoe.

Let’s go over to this guy now. I have here my 5D Mark 3. This is the camera that we’re using throughout the entire workshop. Don’t worry. You guys can use any camera you want, any lens you want. Really your results are going to be quite similar so long as you can get down to a similar aperture that we’re shooting at, or a similar focal length. Don’t worry about the camera. We proved that it’s not about the camera in Photography 101. We shot the entire workshop with a Rebel, and with a Nikon D5200. Okay? Let’s talk about the hot shoe flash.

The biggest deal with a hot shoe flash is that it’s super easy to modify your direction of light. I mean, look at this. We can control the head any way we want. All I’ve got to do is push down this little button on the side. I can turn it from left to right. I can turn it behind me. I can point it up, point it down, I have full control over the direction of light. In addition I can modify the quality very easily, but none of these modifiers are really going to work well with onboard flash. Next what do we have? Point number 3 is that we have a lot more power. We have a bigger flash head which is going to give us a slightly softer light. It’s still not big enough to really give us a soft light, but it’s better than this. It also has more power than this. We have a lot more functionality. We have different modes. We have TTL, we have manual, we have rear curtain sync, we have high speed sync. We have all these additional full features in a full featured flash.

If you’re talking about a manual flash, well, you’re going to be more limited on features on a manual flash. We’ll discuss the differences between full featured versus manual flashes in just a little bit. We have a lot more features with one of these types of flashes versus an onboard. Next, red eye is going to be very rare because it is mounted above the hot shoe. Okay? The flash is actually coming from a decent distance above the lens, so you’re not getting that direct kind of reflection from the eye that you would if the flash were mounted directly above the lens. We’ll get red eye far less often with a hot shoe flash than we would with an onboard flash.

What are the cons? Okay. There’s really only 2 cons. Number 1 is that there’s an additional cost to this flash. Depending on what one you get it can vary. A manual hot shoe flash is going to cost around $100. Full featured ones would go from 2, $300 up to 5, $600 pretty easily. That’s definitely a lot more considering this entire camera body was probably 6 or $700. That comes with the onboard flash built in. The other con to it is that there’s just more to carry. For some people that might actually be an issue. For some it might not. It’s just another piece of gear which you could potentially forget. If, for example, I forget, or if I just don’t take my hot shoe flash with me, with an advanced camera like a 5D Mark 3, it doesn’t even have an onboard flash built in, so I’m kind of out of luck there. It’s one more thing to carry, but it’s going to be worth it overall.

My advice to you is, if you don’t already have a hot shoe flash, watch this entire workshop, and then decide what features are important to you, what’s your budget, and your price range, and go out and buy one at that point. If you already have one, then great.