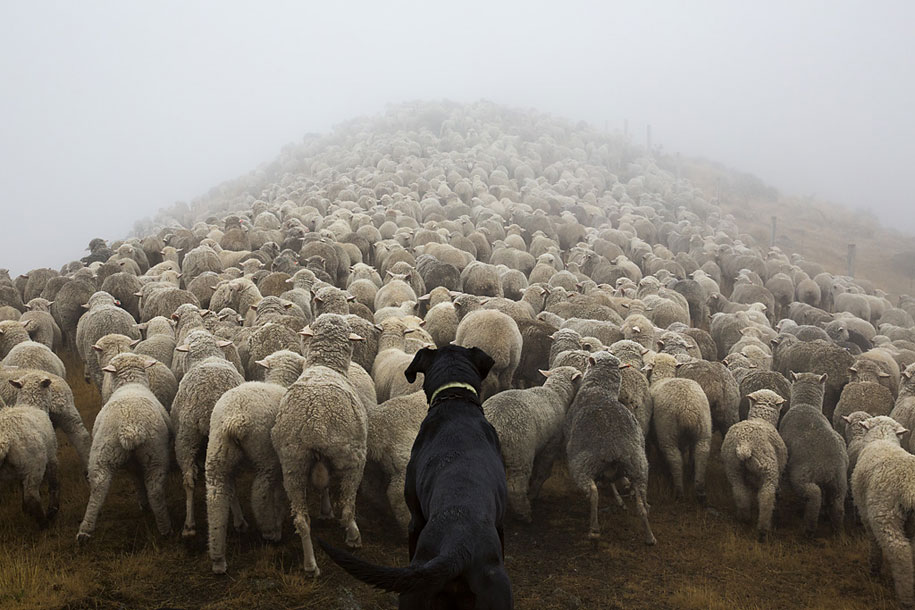 From herding to tracking to hunting and guarding flocks, to war dogs and police dogs and sled dogs, the some canines have served humans for centuries as much more than a trusted companion and a furry member of the family. Some dogs are bred to work and get quite antsy and bored if they don’t have the opportunity. My friend got an Australian Cattle Dog a few years back and he’s been a “difficult” dog in the fact that she can’t keep his smart mind busy enough. Bred for herding cattle, her dog is intelligent and energetic and is very bored in the suburbs with my friend and her family, even though they do raise some chickens.

Photographer Andrew Fladeboe has created a series documenting the hard working canines from all over the world. His three part series titled, “The Shepherd’s Realm,” has led him to Norway, New Zealand and Scotland thus far, and Andrew hopes to visit many more countries to photograph these assiduous canines.

For the first part of the series, Andrew actually photographed a wide variety of animals from bears to majestic white lions (which are breathtakingly gorgeous, I might add), but narrowed his focus for the second and third parts of the project to only the working dogs.

I think one of the reasons I decided to focus on animals is because I didn’t think anyone was portraying them the way I saw them. The animals in our works stand on their own as sentient beings. They occupy the print with an aura of dignity and command a level of respect from the viewer. They are not anthropomorphic photos of animals, but a celebration of what these animals are for what they are. It is art for animals sake, not animals for arts sake.

These dogs were all highly trained and therefore, quite easy to work with, according to Andrew. Combining breathtaking landscapes and well behaved dogs, the most difficult part it seemed was explaining his concept to the owners, some of which were farmers were dubious, but did “end up enjoying the process” and introducing Andrew to other dog owners.

Andrew will be having a solo show in NYC at Peter Hay Halpert Fine Art this October  where he will sell large scale limited edition prints. If you’re in the area, I highly recommend you stopping by. If not, be sure to check out Andrew Fladeboe’s website here. On his blog, Andrew also focuses on not only the jobs these dogs do, but also features specific dogs and their duties, but beware, all you dog lovers will spend quite a few hours perusing the adorable pups and the noble work that they do.

CREDITS: Photographs by Andrew Fladeboe are copyrighted and have been used with permission for SLR Lounge. Do not copy, modify or re-post this article or images without express permission from SLR Lounge and the artist.

Fairies, Forests and Fantasy: A Making Of |How You Shot It