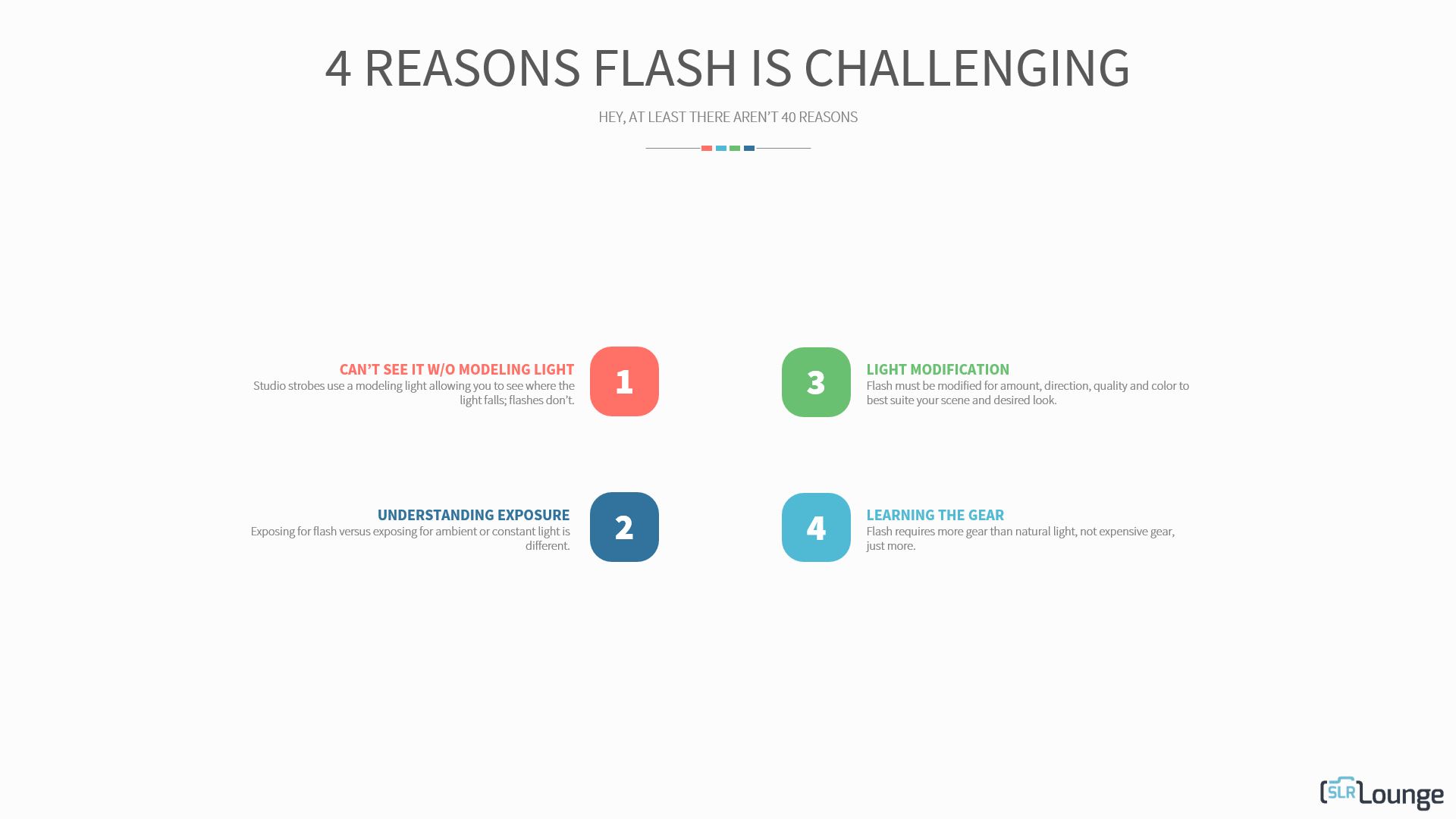 Okay. Let’s get into this. Number one, can see it without a modeling light. Now, what is a modeling light? Okay. So modeling lights are basically just lights that go over flashes like that you might use in the studio. Now, essentially model light is just an ambient light that comes from the flash head. Without that, we can’t see the flash, so if you’re using like small flashes like all the flashes that we’re using inside this workshop, they don’t have modeling lights. Meaning, that you only see the flash when it actually fires. That makes it challenging. Because when you’re working with ambient light, like I always say like, LED lights, like this type of light, it’s a constant light. So whether you’re outside in sunlight and you’re modifying that with a reflector. You can see what that reflector is doing, you can see where that light is landing and so forth. With these pocket strobes we can’t see that until we actually take a test shot. And that’s one of the reasons why it’s a bit challenging, because you don’t see where the light is, you don’t see how it’s falling, you don’t see how much light you have, the intensity and so forth until you actually take the shot. But that’s okay. Once you guys understand how to light and once you understand how the flash works, these are things that will naturally come to you. You’ll naturally understand that if I fire a flash through this type of a modifier at this power, it’s going to roughly look like this. You will take one or two shots to test it out and adjust your settings, and you’re good to go. But that’s one of the reasons why it can be a little bit challenging.

Number two is in understanding the exposure. Flash exposure compared to ambient light exposure. Those are two different things. And while there are similarities between them, there are also differences in the way that flash works and versus the way a constant light works. Like I said, a flash, you can only see for that split second when it fires versus with ambient light or with constant light, you see throughout the entire duration of the shot. So of course, because those lights operate a little bit differently, there’s going to be differences in the way they are exposed. Now, once you understand the base of this, again, it’s not that complicated, but it’s just one of those areas that people get a little bit intimidated by because the exposures are a little bit different.

Number three is light modification. With flash, you really need to modify it. And we have lots of modifiers here. Mogmods, Grids, we have this guy, like a bib. I can put it on my head. We have Fstopper flash disk. We have so many different modifiers for flash. And that’s the thing is with flash, you have to modify it to get to the right look. I mean you don’t have to. If you want direct flash and that’s great if it fits the style that you’re looking for. But that’s only one type of light; and to get different types of light, it requires modification. And this means that you do need to learn a little bit of what these modifiers do; but again, modifiers are extremely simple to understand once you get the basic principles of light quality. Soft versus hard light. Diffused versus specular light. We’re going to explain those again in detail once we get into it. Once you understand that, you can simply look at a light modifier and kind of guess what it’s going to look like in camera.

Number four is learning the gear. Again, you know, because we’re using on-camera flash, we’re using modifiers, there is more gear to learn. But that’s also why we’re focusing on just on-camera flash. We can do so much with just on-camera flash. That it’s really going to blow your mind if you will. But the fantastic thing is that, most people will never in their entire life realize how much an on-camera flash can actually do because they won’t have tried these types of things, and that means that they’re always going to rely on off camera flash, and they’re always going to rely on studio strobes, and they’re always going rely on huge modifiers, and so forth. And that’s great when you have those kind of things with you. But what about when you’re in situations where you don’t have that stuff? What about when you’re situations where you have to get a shot quick, and all you have is your on camera flash and maybe someone standing there with a white shirt, or maybe just a reflector? Well, understanding these principles and understanding this foundation will help you to get shots that nobody would have thought possible with just the basic gear that you would have on you. So while there’s tons of gear out there, we’re going to focus on just the basics. We’re going to focus on just on-camera flash, on-camera flash modification, and light modification, and light shaping. And you’ll find that each of these principles– well, it applies to every other piece of gear that you’re going to use whether it’s on-camera, off-camera, pocket strobes, studio strobes, and so forth.

Chapter 1 Quiz: Getting over the Fear, Hype & Myths