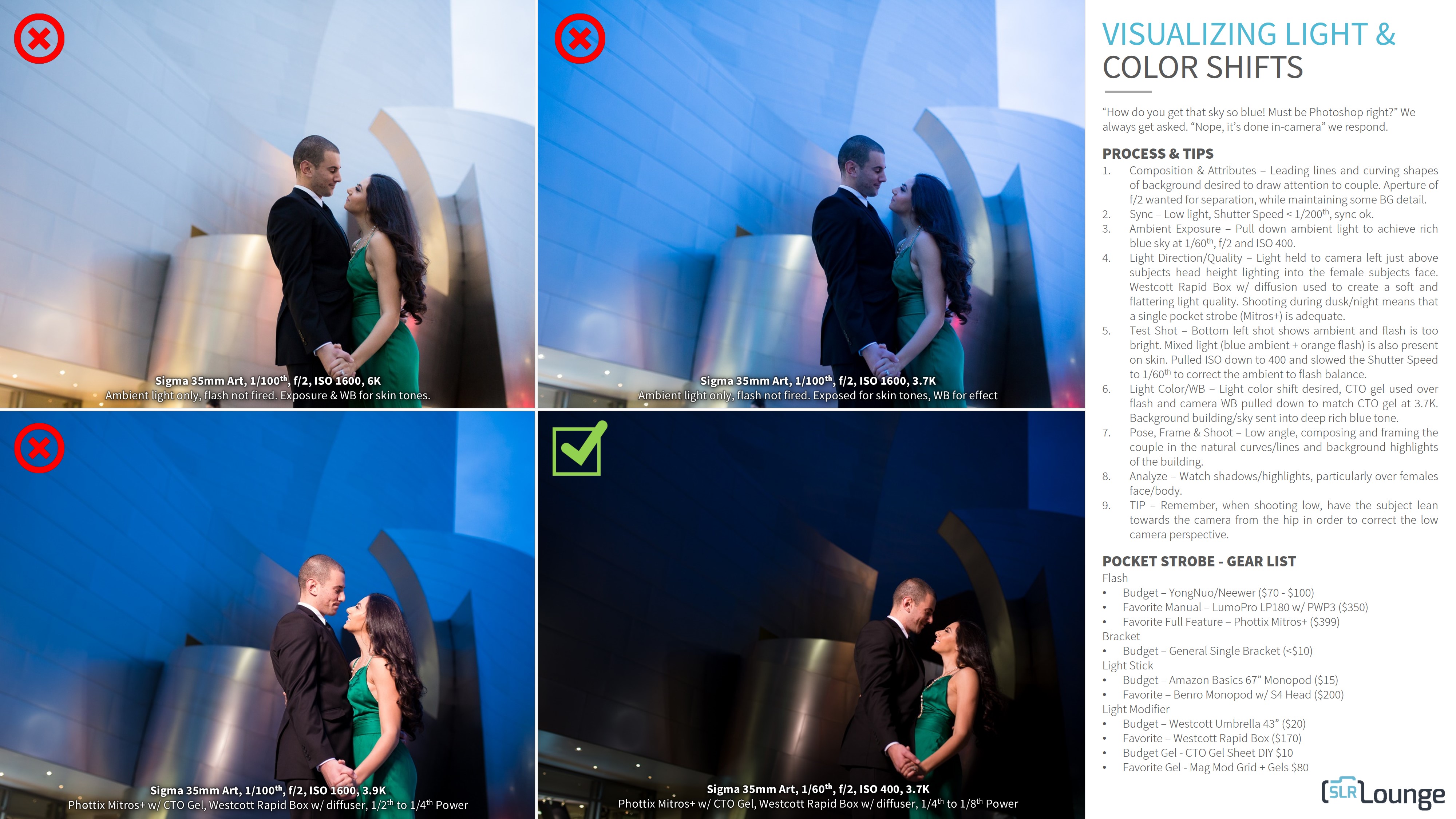 Now, not only do I want you to visualize and predict what happens when you change your ambient light exposure as well as your flash exposure in that ambient to flash mix, I want you to also visualize what is going to happen when you do white balanced shifts and you modify colors on your flash because it only leads to awesomeness. We demonstrated this effect back in Lighting 101 when we shot Jill on the beach and we’re going to do it again here but this time with off camera flash. Why? Because this effect is one that’s going to absolutely wow your clients.

We get asked this question all the time. “How are your backgrounds so blue?” They usually don’t say that like that, I just say it like that. I don’t know why, because I think it sounds awesome. Our clients ask that, photographers ask that, and we always hear this, “How do you get your backgrounds so blue?” Then they go, “It’s Photoshop, isn’t it?” Then we say, “No, it’s not Photoshop.” I love Photoshop but it’s not Photoshop. That’s done in camera via writing techniques. They go, “What? I don’t believe you.” I don’t know why I keep taking that voice on whenever I talk about my clients like that.

Either way, they don’t believe you. Then when you show them on set, when you show them a shot … And I always do this shot just to show them, “Hey, this is what you see with your eyes and this is what I just created.” I always do that before and after on set because I want to show them that. I show them, I go … This is what I say. “This is what another photographer would have shot, but this is what I created.” Then they’re like, “What? We hired the right guy, you’re so awesome. You’re amazing,” all these praise and I just soak it up like a sponge. “Yes, yes, give it to me, give it to me.” I just agree with them throughout … I’m just kidding, I don’t really do that. I just say, “I’m glad you guys dig it, let’s keep moving.”

Be humble, people. I’m just kidding, showing off. Showing off all the time. Okay, so back to this shot. We’re shooting on an actual couple session. We’re in front of the Walt Disney Concert Hall here. You can see that the ambilight is fairly dark. Right? We’re shooting around dusk, the sun has set. Our sky is still fairly bright. We have 1/100th of a second here at F2 and ISO 1600 so we still have enough light in the sky that we could shoot natural light if we wanted to, but it’s that perfect time where a single modified pocket strobe really shines. All we need is one pocket strobe, we need one modifier like, for example, my favorite one for a single strobe modification is the Westcott Rapid Box.

Easy to set up. Beautiful little Octabox. It’s very portable, very light, easy to use. Okay, so we have that on there but this shot is just ambient light only. Again, I shoot this shot at a regular light balance, everything is just exposed normally as we would just expose for skin tone. This is my pre-shot that I want to show my clients.  Now, for the compositional and my attributes, well what I want in this shot is I want these leading lines of the downtown Disney Concert Hall to basically lead into the couple. I’ve placed them right over where this curvature and everything is here.

Kind of everything leads into them and the most busy area, the frame, is just highlighting them in the shot. Cool, but I want to do a couple things. I want to create background separation by blurring, but not to the point where we don’t notice what’s in the background. I don’t want to blur to the point where it doesn’t look like a building, I just want a little bit of blur, so we go to F2. We also need a little bit of light here so we go F2, a large aperture gives a good amount of light and maintains background detail while also giving us a good separation.

With sync we’re in low light, people, we don’t need to worry about sync. Less than 1/200th a second, we’re solid. No ND, no HSS necessary. Ambient light exposure.  We pull down the ambient light here. Now again, visualize what happens if we darken that shot and move to a darker background? This is actually the exact same shot. This is … I want you to visualize just what happens between 6,000 degrees Kelvin versus 3700 degrees Kelvin in camera. Okay? That is the shift there. We can see, that’s pretty dramatic already.

Now, let’s take that a step further and we’re going to darken this down just a bit. We get our correct ambient exposure right around 1/60th, F2, and ISO 400. Okay? For the light direction and quality, well we already know that we’re shooting with the Octabox with the single Phottix Mitros on that guy. Why? Because it’s simple, it’s easy, it’s convenient, it’s the ideal kind of light set up for dusk, evening, indoors, and that kind of stuff. The Rapid Box also gives us a nice, diffuse light so with that diffusion on the outside of it we can place that close to the subject and get a beautiful wrapping light. Very soft, very nice. Very soft, very nice, I feel like … I don’t know, I don’t know why I said that.

As far as the light direction, once again, we place it up top, camera left, coming top down towards the girl’s side of the face because we want to fill the female subject’s face while leaving the guy’s face a little bit in the shadow. Okay, so the test shot. This is our test shot with the strobe. Basically, I don’t quite have the right ambient to flash balance in this shot. My flash is a little bit too bright, my ambient is a little bit too bright. This was at 1/100th of a second at F2 and 1600. It’s that same exposure from this shot basically, just where maybe one, two minutes later on.

What do we end up noticing is that we have our Phottix Mitros. We placed our CTO gel on it because, again, no more white balance, right? We took a test shot right here and we saw that they’re going to be very, very, very blue. To fix that we add the gel to our flash, we put that inside of our rad box and now we get a nice, warm light on them. The only problem now is that they’re too bright. We’re at one-half to one-quarter power. I want a little bit darker, a little more moody of a background type shot. I’m going to pull down the background a little bit and I want just a little bit more … Sorry, a little bit less flash power. Let’s take a look here. We went basically to 1/60th of a second, F2, and ISO 400. We dropped the ISO by two stops, but then we also dropped the light … Or actually, we increased the amount of light by about three-quarters of a stop, so not quite one stop but close to one stop.  We end up with a one stop darker background overall.

We’ll bring the flash power to one-quarter to one-eighth just to balance it out a little better. We’ve lowered our ISO so that it automatically brings the flash power down as well. We don’t really need to make too big of a shift here. Most likely, we probably held it around one-quarter power there. Now we have at least the flash to ambient balance that I want. Stylistically, if this is what you want, go for it. For me stylistically, I like this look and that’s why I X’ed off the other ones. Our very first shot. We then showed them this one and then we showed them this one and we’d go, “See, look how awesome we are,” and they’d go, “Yes, you are.”

These two shots were for you guys, so that you guys can visualize and see what that shift does with the exact same shot between 6,000 and 3,700 degrees Kelvin. Then we went down to … For the final shot, yeah, we’re at 3,700 degrees Kelvin. This shot again we’re showing you. We wanted you to see basically how cool they are here and, with the CTO gel added to the flash, how we can warm them up and balance them out. Remember that generally when we are using fill light as … Or basically, when we’re using ambient light as fill in addition to our flash, we need to match ambient light. Guess what we’re doing here, we’re not using it as fill. We’re over powering ambient light for this shot, which means that we don’t need to match that color balance.

Here they’re really dark. We don’t need to match that because it’s going to be very, very blue. We want to override the existing light with our flash in this kind of an instance. To make it look right, you just need to make sure that you actually do overpower existing light. Otherwise, you end up with mixed light. Our final shot, we have our Phottix Mittros plus with a CTO gel, the Westcott Rapid Box with diffuser around one-quarter power. We’re at 1/60th of a second, F2, ISO 400. 3700 degrees Kelvin on our Sigma 35mm Art. We have the couple leaning back slightly in the photo so they’re leaning back. Again, when we’re shooting bottom up out tip is to … Remember to lean them from the hip into the camera so we’re correcting that perspective.

If they’re like this and you’re shooting bottom up like that, you have them lean from the hip just to correct that distortion. But they’re also leaning back a little bit so he’s kind of giving her a little dip while they also lean into the camera.  We get a nice little perspective fix as well as that cool look of her leaning back just a little bit.

That’s it for this tutorial.  Hopefully, this all made sense to you in how to visualize how you can move from this shot to this shot in the span of just a couple minutes. In a scene that looks nothing like this and end up with this shot that you can wow your clients with.