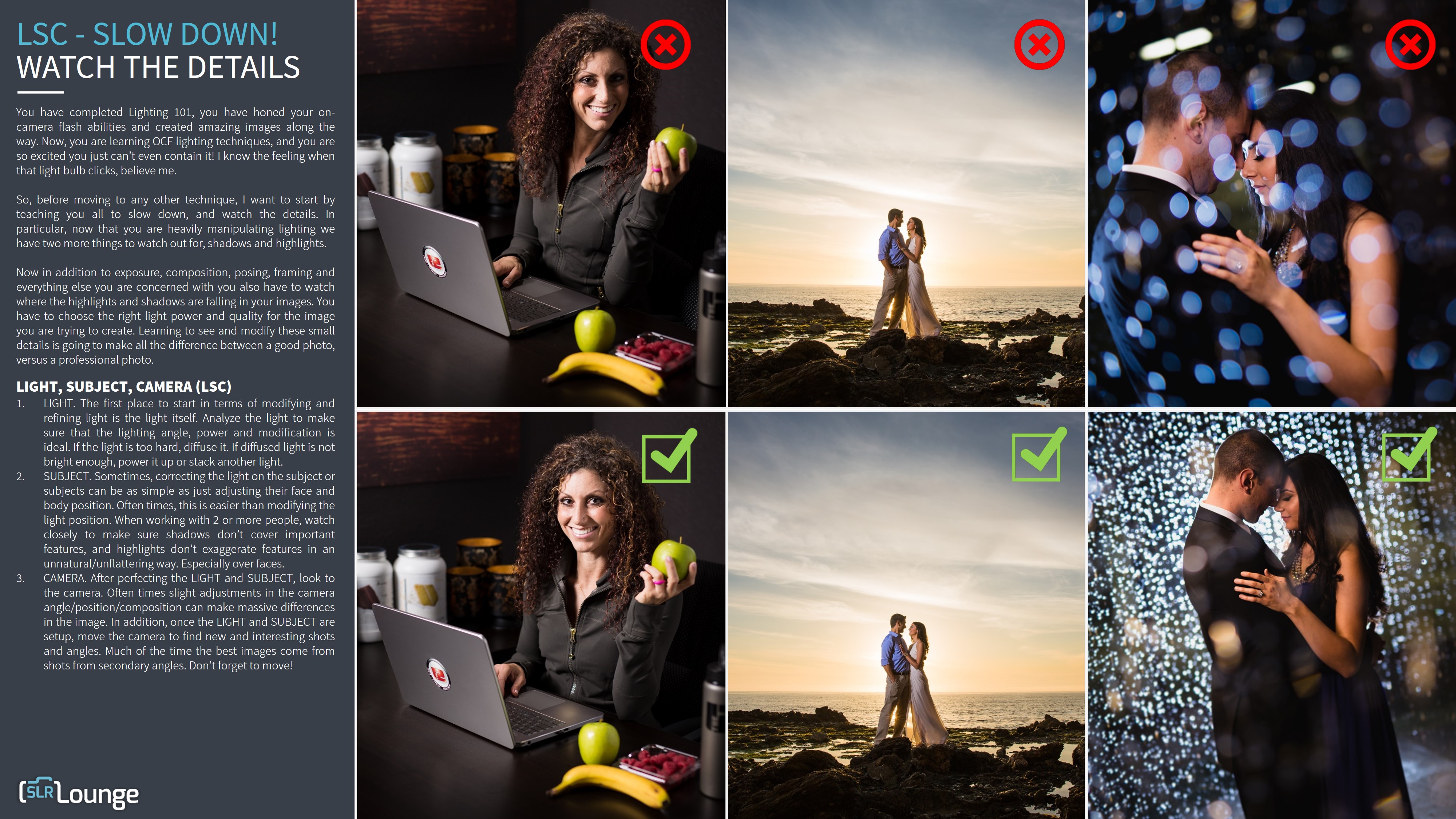 Lighting 201: Slow Down! Watch the Details

Slow Down! Watch the Details | Transcription

Let’s take a short little break. That rhymed again. Slow down, watch the details, LSC. What does LSC stand for? Stands for light, subject and camera. The 3 things that we’re going to use basically to refine. When we analyze our image, those are the 3 general areas that we’re going to modify to refine and get the right look into the right light quality for our subjects.

What is the whole purpose of this? Because we’ve talked about it, but I want to give you the whole thought process and the philosophy behind this. Granted, I know I talk a lot about philosophy, I’ll try to make this somewhat brief. Here’s the thing, in Lighting 101 we taught you all these amazing techniques of how to take your on-camera flash to modify and create tons of great different images. This is Lighting 201, we’re going to get even more advanced techniques. Getting the flash off the camera and creating even better images.

301 we’re going to use multiple lights and constant lights, and balancing the two. 401, we’re going into studio strobes and combining everything together. With all of these techniques it comes to this point where it’s just technique overload. What ends up happening, especially with newer photographers, when you’re new and you’re jumping into this stuff, you get all this gear and you take it all on your shoots. You have this, I don’t know how to say it. Other than almost like this technique vomit. Where you get on to a shoot and you just start splurging these techniques out and throwing them out on the set.

What ends up happening is you’re moving from shot to shot and image to image and you’re creating these cool things and you’re like, “Oh my gosh. The light is so amazing. It’s so fantastic.” You’re just excited about all these techniques that you now know how to do that you forget to look at all these images closely and to refine and to slow down the process.

Remember that each one of these shoots is difficult, because on every shoot … Shoots are fast paced. When you’re at a wedding it’s fast-paced, when you’re doing a portrait session it’s fast paced. You’re dealing with time restraints. You’re dealing with the sun setting. You have to coach yourself and train yourself to learn to slow down the tempo so that you can do this, and it will take time. It’s one of those things that we hammer into the heads of all of our shooters, to slow down. Slow the tempo of your shoot, take the time to watch the details, because otherwise this is what happens.

You get on the set and you start vomiting all these amazing techniques out and you start going through and you’re shooting a billion images. You get in front of your computer and then you go, “Oh man. The pose is off there. Oh man. The lighting is kind of off right there. I can see a big shadow there. Oh man. This has a problem too.” You end up going through an entire shoot day and you’re not happy with any of the shots that you got, because we didn’t slow things down. That’s the tip that I want to give you right now, is it merits saying enough that I actually created a slide for it.

You know that if I created a slide to slow down then it’s probably something that you might run into in the course of your photographic career or your journey. Slow things down and when we look to correct things, I generally look in this order. The most obvious thing is of course the light. What we do, we look at the light’s position as far as the light direction that we’re creating on the subject. We also look at the light quality. Is the light specular? Is it diffused? Do we want it to be specular? Do we want it to be more diffused? Do you want it to be softer, or do you want it to have a harder transition edge?

You look to those things first, obviously because that’s the first step to look. What I actually like to do is I typically will look at the subject first. In particular when we’re shooting a couple or when we’re shooting a group, more often than not your lighting issues can be fixed by the couple’s pose or by the group’s pose. You can actually fix everything in relation to where they are in relation to the light. The third thing to look at is the camera’s position in relation to both the subject and to the light source as well.

Let’s go through a few of these examples. In example number 1, this is a shot that we’re going to be demonstrating in lighting 301, where we’re basically using multiple off-camera lights to light this entire scene. It create a really nice soft lifestyle portrait of Nikki who’s a nutritionist, and she’s sitting in front of a computer holding an apple.

In the very first shot at the top, I have too dramatic of a light. There’s just too much shadow on the face. The correction is literally just as simple as saying, “Nikki, turn your chin into the light just a little bit more. Turn your chin to the left just a little bit.” She does that and now we have a beautiful Rembrandt light on her face and we get just the right amount of shadow.

That was basically a subject change. We changed the subject position in relation to the light and it’s the simplest change possible, and that’s why it’s the first one that I always look to. “Can I just adjust the facial position to get to the light that I want?” Keep in mind 1 thing. When you’re shooting portraiture you generally want to shoot flattering angles. If someone doesn’t like a certain side of their face, you need to keep that in mind when you’re adjusting the chin position. You also need to keep in mind whether you’re short lighting or whether you’re broad lighting.

By moving her chin into that light now we’re short lighting, but we’re lighting up  more of the face and we’re leaving the broad side of the face in the shadow just a bit more. It’s not too much shadow, whereas over here it’s just too dramatic of an image. Let’s go to this image now. This image was the one that we talked about when we were overpowering the sun with our bulb of lights. Now you can see close up. If you zoom in on her face right there, you can see ever so slightly that his face is casting a shadow right onto her nose and eyeball area.

Now, look at this image. Even at this size of my screen, that is barely noticeable. If I’m shooting quickly and I’m just looking at the back of my camera and I go, “That looks fantastic. I love that. Okay, great. Let’s go on.” I didn’t take the time to actually say, “Let me zoom in. Hold on 1 second” and zoom into the image and go, “Oh, you know what? There’s a shadow right there. We need to adjust that.”

If I wasn’t slowing things down and taking the time to do that, I would completely miss that. Because even on a larger screen it’s very difficult to notice. What did we do here? We made a minor change once again in the subject position. This one I think we actually brought the light over a tiny bit. We brought the light over a little bit, we also opened up his shoulder just a little bit. Just pulling his shoulder back a little bit and turning her a little bit more. It’s a very subtle change. We only need about 1 inch of total movement and we can get that light off her nose.

Again, without that slowing things down, we would end up with getting this back and being like, “Oh man. This is a portfolio image.” Zooming in being like, either we messed up the shot to the point where we can’t fix it or we’re going to spend 30 minutes in Photoshop trying to brighten that area to even it up.

Let’s go on to this one. This is one where we made several different adjustments. Number 1, the light is in a bad position. When we look at this top shot you can see how there’s a highlight spilling onto her eye, onto the side of the cheek. It’s all over her face. It’s highlighting her face in a very unflattering way. I don’t want that. What I did was, I moved the flash further behind the subject and I also moved the camera angle. We put the flash further behind and then we moved the camera angle so we are not shooting more into her face, but we’re rather more of a profile into both of their faces.

Here we moved both the camera and the light position and now we’ve eliminated, basically whatever that Rembrandt here was, it now just became an edge on the side of her face. We’ve also eliminated the highlights on the eyebrows, on the eyelids and on the other side of the cheek as well. We get a much better angle, we get a much better shot overall. It’s the small changes in the light, in the subject and in the camera angle that are going to make all the difference in the world, between an image that could have been great versus an image that’s actually great.

Slow things down. Take the time. Remember that it’s your shot.

Over Powering the Sun – Part II

Assignment | Over Powering the Sun and Using "Upgrounds"