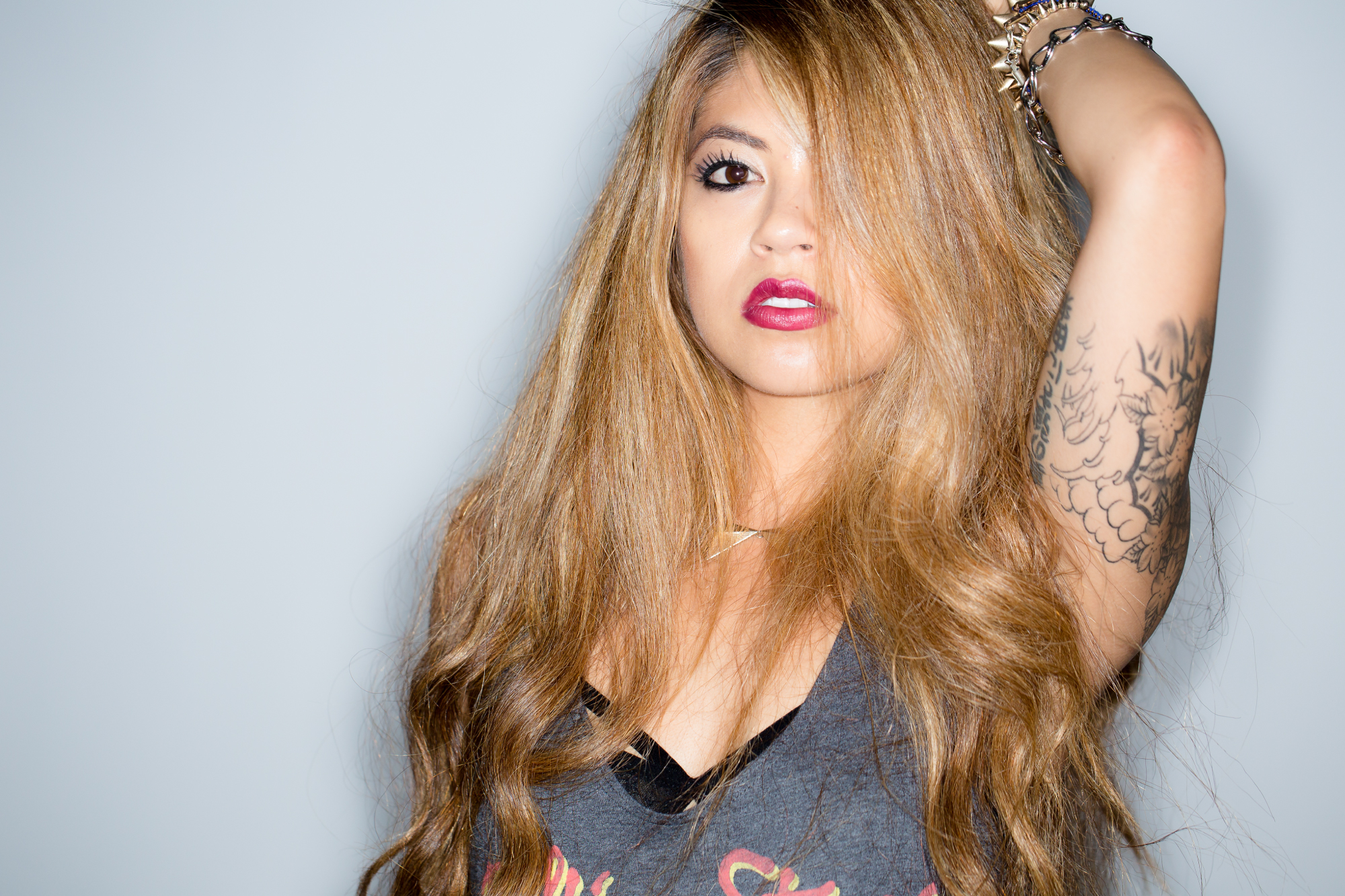 Another fantastic direct flash modifier, which is one of my favorites, especially for studio use, is the ring flash. Now, this is the Expo Imaging Ray Flash 2, and it’s a fantastic light modifier for on camera flash to turn that on camera flash, essentially, into a ring flash. This is fairly inexpensive compared to most ring flashes. This is about $140. There’s also a budget version of this. If you go to diyphotography.net, I think for $25, or so, they have a DIY cardboard ring flash, which will get you a ring flash type look. I wouldn’t ever take it and show it in front of a client, or anything. This is actually something you can use professional, and you can use in front of clients, and it looks nice. It’s far less expensive than a traditional ring flash. If you already have a hot shoot flash, that is, because you do require a hot shoot flash before you can actually use this guy.

Traditional ring flashes can range $500-$600. This ring flash look is a very distinctive look for 2 reasons. Number one, the catch light that it creates in your eyes. It creates this ring type catch light, and because it comes directly from the lens itself. I’m going to show you how to mount it, and I’ll show you exactly where it comes from and how it looks. Because it comes from that angle, it creates a very unique, even shadow across the body, basically. You get this nice shadow halo.

Here, we look at the variable effect on this side, and then the ring flash effect. You can see, especially on this more close up shot, you can see this little shadow halo that’s going to go around her entire body. Especially here, as well, you can see right there, see it along this shadow side. This is a very distinctive look that’s created by only a ring flash.

Let’s show you how to put this guy on. I have just my standard camera and hot shoot flash mounted right now. We don’t need the bracket in this case, because you actually need this right next to the lens. What we’re going to do is just aim the flash head down and I’m going to go ahead and take the hood off. You know what? Before I put the flash head down, one very important thing that I often times forget. This little guy comes with a rubber band. It’s a little, rubber, circular thing. Do not throw it away. It’s not for good looks. It’s not because it’s just an extra part and they thought you might need a rubber band to tie your hair together or something. This is actually to go underneath the flash itself, because when you’re putting this ring flash on, it’s actually going to weigh down the flash head a little bit. What you do, is you put this down right into this little slot, and now when you bring it down it kind of hits that little thing and prevents it from drooping.

Once this is on, all you’re going to do is just grab your ring flash. You’re going to open up the side of it, and I took the hood off just so it doesn’t constantly bang against the bottom of this thing. You place this over, and then you make sure that this is the right length. You can pull it out just a little bit where it goes directly over the lens. From here, if you want, you can reattach your hod. If you’re worried about light spill from other sources, then you can put the hood on. If you’re working indoors, and it’s dark, you don’t really need, necessarily, the hood on. The light’s all coming from behind the lens, anyway. You can see that the light now comes directly from where the lens is at, so you get this beautiful ring shadow effect around the entire body. You get this great catch light. Look at the catch light that you get. Especially when you’re shooting closer, the catch light opens up and it becomes even larger as you get closer to your subject.

This is that ring catch look. Now, let’s go over some primary tips here. Number one, make sure that the ring flash is placed correctly. If you don’t have the band on, this is going to droop down. It’s going to flash down, and you have to constantly hold it up. Make sure you have the band on, otherwise you’re basically going to be losing light, and it’s going to be spilling to the wrong area. You’re not going to get the right effect.

Likelihood of red eye is also increased. Why? Because now our flash is coming from directly behind the lens, which means that it’s going to enter the pupil of the eye, and it’s going to refract around all of those blood vessels, and come out red, which means more likely than not, you are going to get some red eye with a modifier like this, because it’s coming from the same angle as the lens. Red eye is pretty easy to fix. It’s just one of those things that you will have to fix.

Ring flashes that modify direct flash, like the ray flash, tend to have a heavier shadow on one side. With the ray flash, it’s basically channeling the light down from the flash head, and into this little ring area that goes around. What ends up happening, and this is kind of more pronounced when you’re shooting portrait aspect ratio, is that the light that’s entering from here is going to be a little bit brighter than the light that’s coming out from this side. Why? Because of inverse square law, remember? Light coming from this side will be a little bit brighter than this side, because this is closer to the flash head, that’s closer to the light source.

What ends up happening, is that, on one side of the model you can kind of tend to get a little bit heavier of a shadow. If you look on this side, we still have a little bit of shadow around this left edge, but the shadow is more pronounced on the right side. With any modifier that modifies your hot shoot flash like this, you’re going to bet that, just because part of it is going to be closer to the flash head than the other side.

If you use this effect a ton, and you want to have a fantastic ring flash, you can get a dedicated ring flash. Now, a dedicated, stand alone ring flash, they provide a better, more consistent look because, basically the light is placed all around this center area. Everywhere, from one side to the other, is all even. They’re gonna set you back quite a bit of money. They’re going to set you back probably $500 or $600 for a basic unit, and they can get even more expensive. If you do shoot a lot with it, it might be worth investing in.

Number 5, for this particular set of images, what we did, actually, for this shot and for this shot, you can see that her hair is kind of blowing back a little bit. We added a fan for a little production value. It’s actually not a fan, it is a gigantic leaf blower that we’re using, because we have it around the office. Why not use it? If you don’t have a leaf blower, or you don’t want to buy a leaf blower, you don’t need to. Just get a reflector, and you can actually do the same thing. Just hold a reflector like a 5 in 1, and just kind of waft it back in forth, and you get that cool look in the hair. We got her hair to kind of tip back and kind of be flowy like that with that fan, but you can do the same thing with a reflector.

From there, all we’re doing is moving in and out. You’ll notice that on this shot, because we’re shooting landscape aspect ratio, we get a really nice light. We get that even shadow across both sides, because we’re not tipping to one side or the other. I would say that if you are using the ray flash, and you want to make sure that you have perfect edge of light all the way around the body, then make sure that you’re shooting landscape aspect ratio. Otherwise, stand back a little bit further, and then go with the portrait, and you’ll get a little bit better of an effect than if you get too close.

You can see the overall look. Once again, what is the light doing in comparison to bare bulb? Well, we talked about the shadow that it’s creating. We talked about, because of basically where the light is coming from, you’re going to have a little bit different effects there. Also, just think about this. The light, it looks like, basically, it’s the same type of light source as the flash, right? We have silver background and it’s basically silver direct light that’s coming out of it. It’s going to be non-diffused. It’s going to be a very specular light that’s coming off of it. It’s larger, so the surface area of this, compared to your flash head, is much, much bigger. That means it’s going to be a softer type of light. It’s going to be more even. It’s going to be specular, but it’ll be a little bit softer all around. That’s what we see with a softer shadow transition everywhere. The shadow transition from areas of light to dark is much softer than with a direct flash.