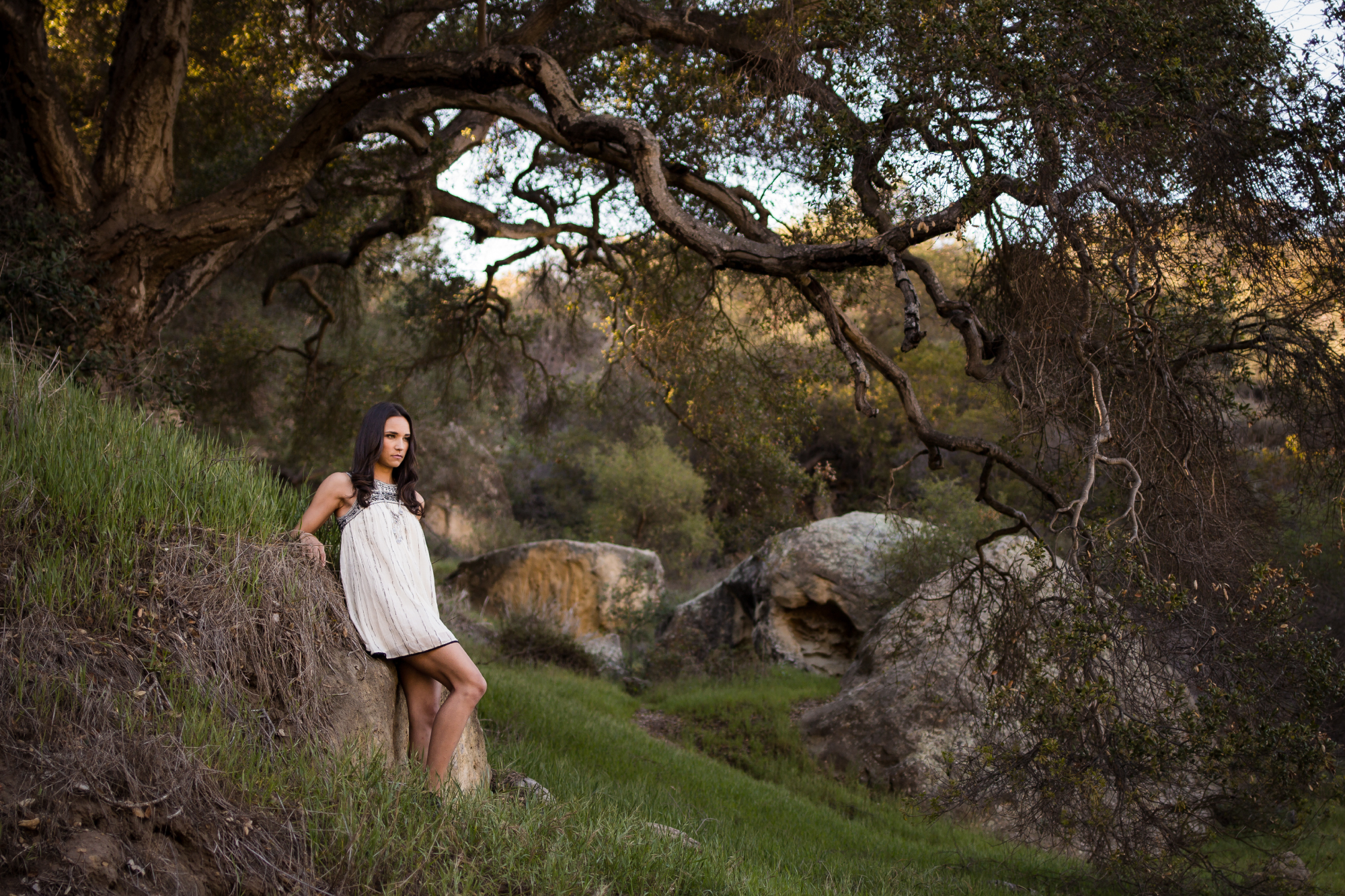 Love shooting with props, guys. When you’re just taking portraits, props can add so much to a scene. And you can get props pretty much practically anywhere. One of my favorite places to get props is just any type of, what are they called, secondhand stores. I don’t know what they technically are called. Secondhand stores. Just go to a secondhand store. It can be the DI, it can be the Salvation Army, it could be wherever you want but secondhand stores makes for the best, especially vintage props and so forth. They add a lot to the scene.

I’m going to move her around just a little bit because I want to get a tiny kiss of light just on her hair. What we have to do is, I’m going to actually move you back so step back into the grass a little bit. Yeah, let’s go back onto the hill just a tiny, tiny bit. That’s perfect. Actually, go back a little bit more just so we get you off the hill and onto the grass part. There you go, perfect.

We can see this beautiful hair light on her which is absolutely amazing and it works really nicely in making her pop off the background. Now bring in this fill light right next to her. You have to be really careful with anything that’s reflective like the silver on this will cast little pieces of light everywhere which is kind of what we’re seeing in some of the shots. They’re easy to clone out but again, if we can avoid it in the shot itself then obviously it saves us a little bit of photoshopping later on.

Let’s go without the camera. We’ll set down the camera real fast and let’s grab a couple of quick portraits. What I’m doing now is I’m turning just a little bit. I’m gonna shoot her against this kind of like darker backdrop. Against the grass is great. That’s one look but one thing that we can do also is when we have this hair light, we can place her against a darker background. We get this beautiful kind of pop off the background look.

We have this beautiful light coming through these trees. I’m gonna try and use it for a little flair. This adds a lot to a scene when you can use flair kind of to add to the artistry. Okay, intentionally using flair can create a beautiful look. It’s the unintentional flair that we do want to avoid. With that flair coming in it’s going to create a nice, soft look. We’re gonna get a little bit of that light streak coming through. It’s gonna be a really nice, bright and airy type look for the shot. I’m on a 35mm and we’re gonna get Whitney kind of walking through.

What I’m gonna do is get down low so that way I can kind of shoot bottom up, we get some of the trees, we get this beautiful look. We’ve already dialed in our settings. So we’re at 1/500th of a second and F2. For this shot I have Olivia right here. She’s might add a little bit of light when she gets closer but for right now we’re going to be totally fine cause we have a lot of fill light coming in directly from the sun so we should be good especially since we’re shooting a little bit further back. These kinds of shots I love because there’s really only a small window. I mean we have basically about an hour where the sun is right in this position where we can shoot this kind of a shot through these trees; we want to take advantage of it.

I’m gonna stop talking. Let’s go ahead and get to shooting. Remember with that spot metering, we basically dialed in a setting of 1/500th of a second F2 and ISO 100 which was correct for her skin and that’s what I want to meter for in this shot. All right so let’s go ahead and get started. Let me get into my position. Okay. You can see that the sun is coming directly through and hitting me, that’s perfect, that’s where I want it because it’s going to come right through the lens at that point. I just want to make sure it’s not too much. Remember that the sunlight, when it flares it is going to brighten the scene quite a bit and it does do it here. We’re gonna shoot a few with it, we’re gonna shoot a few without it and we’re gonna do kind of just a nice little mixture.

Shoot a bunch of shots. We know that we’re gonna get beautiful looking, I love some of these. These are amazing. We got these bright, beautiful looks in the shot. These are the exact kind of images that I would apply filmic type presets and effects to in post production because it has this beautiful filmic look to it. Let’s run it by one more time.

One thing too, sorry one sec, remember a flair does a couple of different things. Not only does it wash out contrast and washes out some of the color which is great, that’s the effect that we’re going for here. It also makes it more difficult for the camera to focus. Why? Because well the camera relies on certain things like contrast and it relies on basically the overall color in the scene, at least, that’s one of the way that it detects AF. When that’s being washed out with a flair, you’re telling the camera I’m only gonna use part of your autofocus system to focus and that makes it more difficult for the camera to do its job. Shoot extra shots, that’s what I’m saying.

When she does something I love I tell her to freeze. Go back one more time. I’m gonna have you step through that light. That light right there in the middle is so beautiful cause it really makes you pop so step back a little bit more and then a tiny bit more. One thing when you’re shooting for flair is remember that you’re best friend is that center AF point cause your center AF point is always going to be the strongest so if you’re having trouble, if the flair is that strong you can switch back to the center AF point. It will do a much better job.

Actually, you know we’ll do is I’m gonna go with her into the light. Basically, what I want to do is I’m gonna step back with her a little bit, get a couple of close-up shots while we’re in that little patch of sunlight that’s coming through before we lose it. We’re gonna lose it in just a couple minutes. I’m gonna go in, I’m gonna keep my camera on the exact same settings.

Now, what we’re gonna do is just add a little bit of silver so Olivia bring the silver in. Generally we always say don’t light bottom up but the thing is that I’m shooting from low down here and she’s also leaning into me from the hip so it’s not gonna look like it’s bottom up lighting, it’s just gonna come in and fill the face with a nice, very warm, kind of harder light. I do need to meter off of her skin tones again. Let me just go ahead and dial that in. I’m gonna go about 1/1000th of a second which should be about right. We’re still at F2.

Posing and Lighting with Female Model