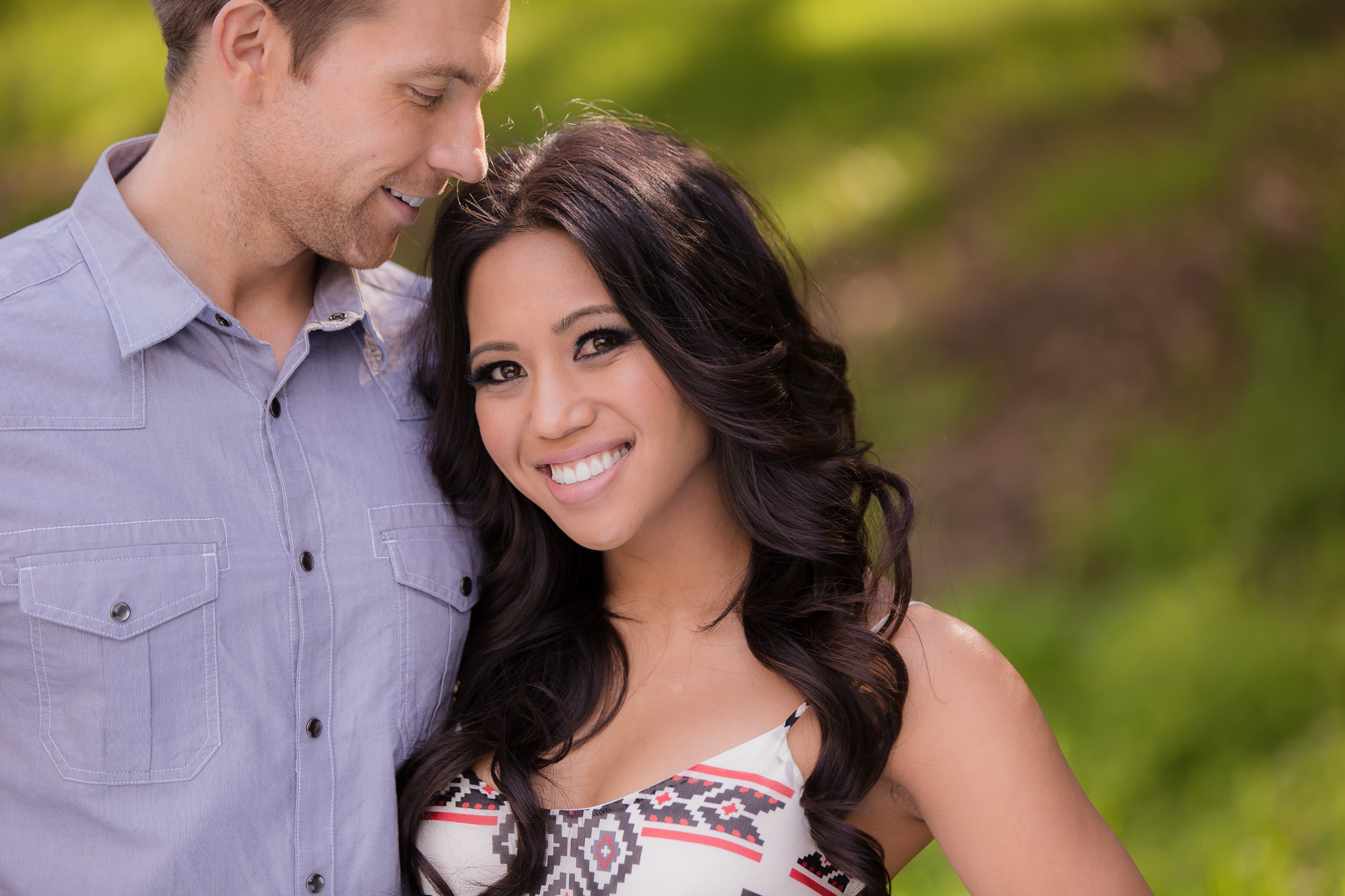 From our experience, our female subjects tend to be a bit more self-aware and self-conscious than our male subjects when it comes to how they look. Because of this, posing female subjects can sometimes be a bit complicated, but we have 5 tips to help make it easier.  In this article, we’re going to show you how to direct and pose females in flattering ways without bringing attention to things that might make them self-conscious.

Tip #1 – Ask if She Has a Preferred Side
In the most sensitive way possible, we like to ask each of our female subjects if they have a side they prefer to be photographed on. It’s important that your client feels comfortable and secure in front of the camera. So during this process, it is important that you show confidence in your knowledge of posing and guidance, while also assuring your subject that she looks beautiful during the process. The easiest way to throw the entire shoot is to make your subject feel like she isn’t beautiful. Hence, when we ask these questions, we do so in a very careful and sensitive manner, such as:

“You look absolutely beautiful! This is going to be an amazing shoot. Before we get started, I wanted to ask you if you personally have a preferred side. I think all your sides are amazing, but I just like to ask ;)”

Goofing around, being lighthearted and giving honest praise will help your female subject to answer the question, without becoming self-conscious. By watching the video above, you can see how I keep it fun and lighthearted by joking around and having a good time with our couple.

Most of the time, our female subjects do have a preference. However, if they don’t have a preference, as a general rule, you should shoot from the parted side of the hair. This means that we are shooting into the part so that the parted hair is semi-concealing a bit of the forehead and side of the face. Generally, shooting from this direction will be a little more flattering since the hair will conceal part of the skin which has the effect of slimming down the face.

While Jackie’s hair is parted dead center, we can still use it to slightly cover part of the face by angling the chin a bit. In the shot below, we are shooting into Jackie’s preferred side, while we have a little bit hair draping down over the side of her face to make for a more flattering look. 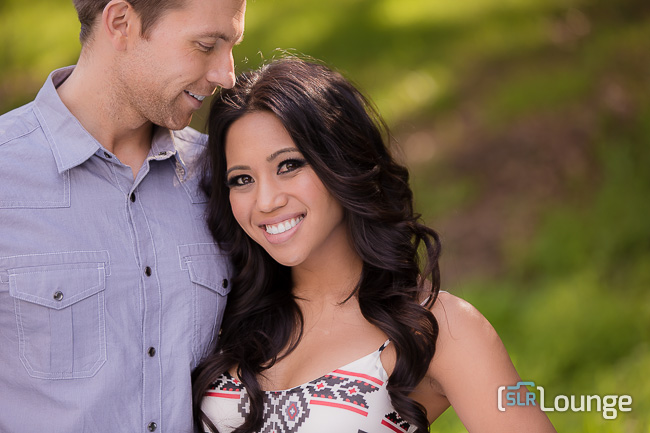 When I’m posing my couple, rather than just trying to explain each point, I like to give them examples of each type of pose as I walk them through the explanations. This helps them to visualize exactly what I am explaining while also keeping the mood lighthearted and relaxed as I “strut my stuff” as you can see below ;). 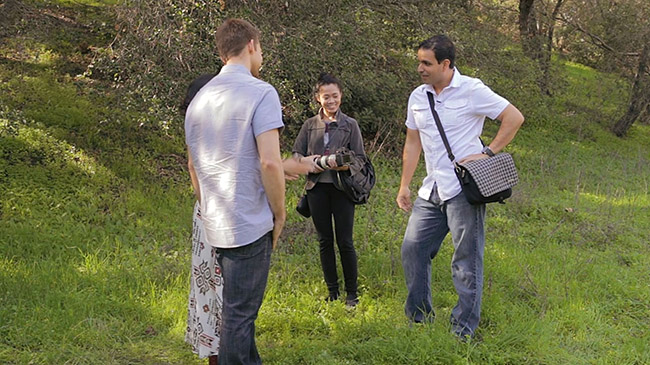 An easy way to reveal the curves in your female subjects is to have her kick her hips by placing all of her weight on one foot. Be sure that she’s kicking her hip away from the camera, because if it is kicked towards the camera it will look bigger as anything closer to the camera will appear larger.

You can also direct the male subject to assist you in each of these poses by pulling the female subject into himself to help accentuate the curves. It’s important for photographers to be confident while giving directions at this time because the client trusts that you know how they will look best in front of the camera. 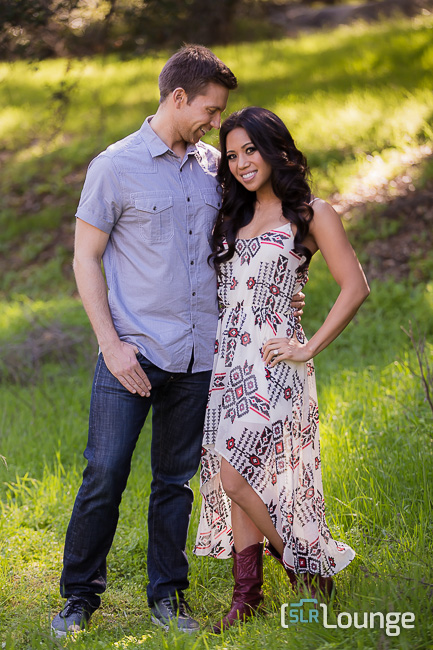 We want the leg that doesn’t have any weight on it to be more playful and involved in the photos. We can have her toes on the ground, crossed in the front, dragged in the back, and even kicked up completely.

We always talk about our system for “journalistic posing” and part of that is really in the legs. When we are just standing around casually, we generally don’t stand with both feet flat. Instead, we typically will stand with the weight on one foot, and then other foot crossed or pointing down at the ground and so forth.

This is exactly what we are trying to mimic to create a more natural and journalistic look to a posed image. Adding that play in the leg will add another dimension of authenticity to the photo. Rather than having her legs be static, we want it to naturally become part of the pose. 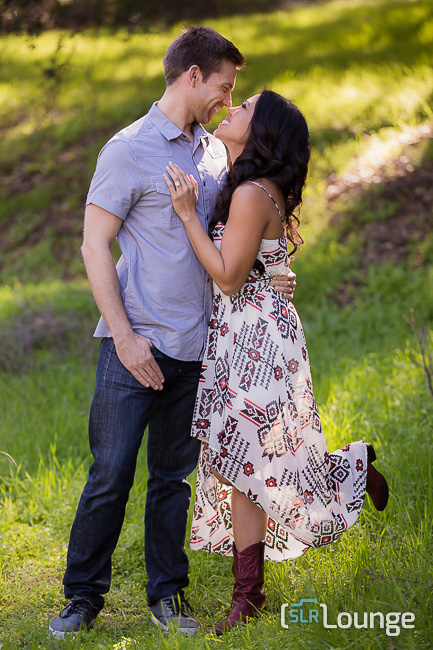 Tip #4. Avoid Placing Arms Against the Body
When the arms rest on the side of the body it flattens out the biceps and makes the arms look bigger than they actually are. This is an effect that we don’t typically want for our female subjects. We instruct our female subjects to put their arms around the back, or on the hips, or in any way that creates space between the arm and the body.

This helps in creating a more natural and journalistic look to our pose, but more importantly, the space slims down the appearance of our female subjects arms as you can see in the image below. 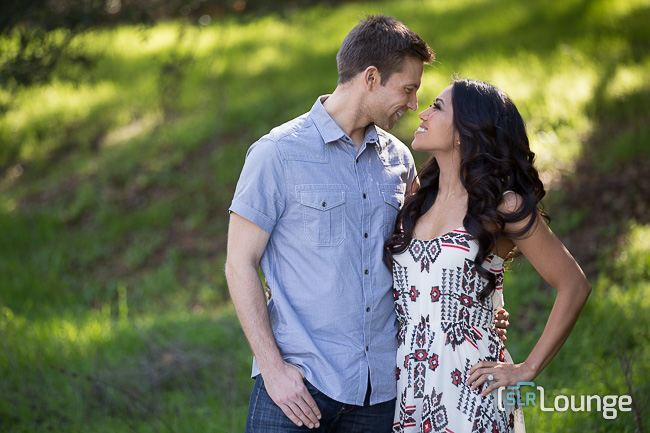 Of course, there are many poses where you can’t create that space between the arms and the body. For example, in shooting couples photography, we use a lot of poses where the female subject places her hands on the male subject. In these situations, just be careful and watch to make sure her arms aren’t flattened too much against her body.

Tip #5. Tilt the Heads Towards Each Other
One last thing we do when posing couples is to have the couple subtly tilt their heads towards each other. Not a heavy tilt which can make the couple look like they’re about to fall asleep on each others shoulders, but a slight tilt so the photos look more endearing. Otherwise, they may look distant or indifferent towards each other.

The image below shows the subtle tilt or tip of the heads towards one another. 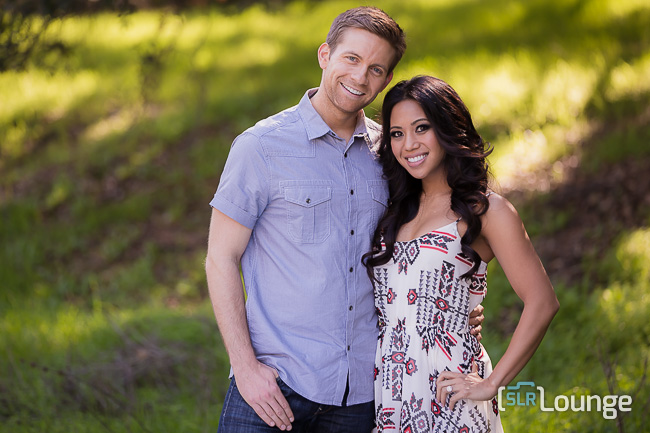 While the tips above focus on the female subject as part of a couple during an engagement session, you’ll likely photograph each of the subjects on their own as well. To help with that part of the session, I’ve also put together a list of helpful tips and poses to make the women you photograph look and feel great.

Pose Guidance for Him

Making Them Your Advocates