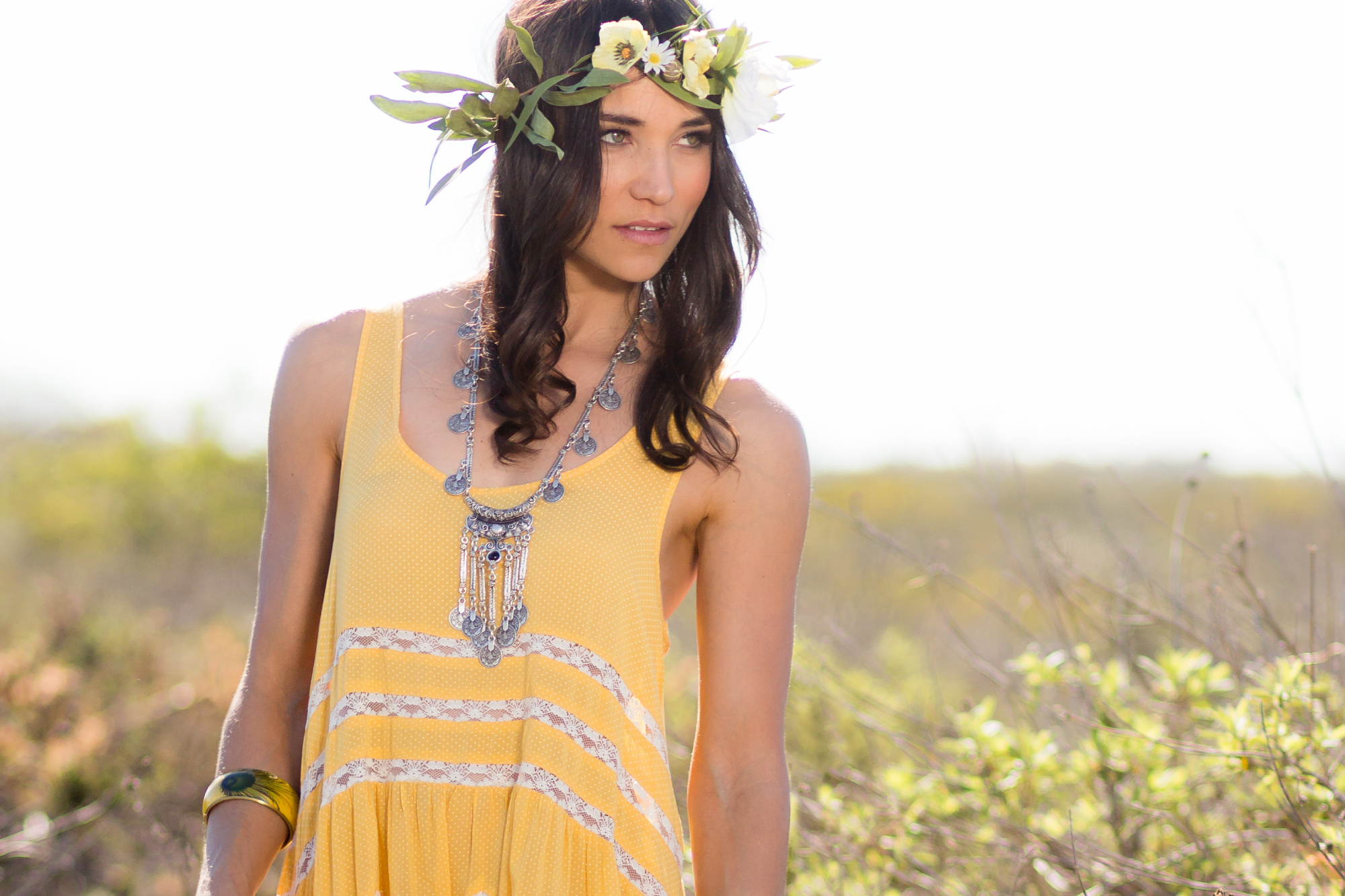 It’s time to take a portrait and we have here, our lovely model, Whitney to help us out. We’re going for this lovely little boho kind of flower look and we have the perfect backdrop for it. With this shot, what we’re going to do is we’re not going to show so much of the background, we’re going to go for a tight close-up portrait, and we’re going to use it, first, using the portrait mode built into your camera.

What we’re going to do is go ahead flip to that now. What I’m going to do is I’m going to show you guys basically what not to do, first. The first thing we would typically do is when we get into a portrait, especially if we haven’t done much photography before is we would just say, “Oh, this is such a beautiful background, and scene, honey, and you look amazing.” Honey, like if she were my wife, but she’s not my wife. If my wife is watching, let me just clarify that.

What we’re going to do is I’m going to take a quick portrait. Again, what we’re doing here is more of like a headshot. I want to crop right here on the top of her head and we’re going to go down to the necklace. What we don’t want to do is your okay cropping off the hair, but you don’t want to crop, typically, the forehead where you don’t have that hairline. You also typically don’t want to crop above the chin. We’re going to do this nice little crop here, but I’m not going to do anything with my lighting or anything like that. We’re in portrait mode and you can see that the flash just popped up. Why did the flash pop up? Because the camera is seeing that we have these deep and dark shadows. I didn’t even turn her towards the sun or away from the sun. I just turned so that the sun is falling partially on her face. We have a very hard light from this sunlight and you can see that by basically the sharpness of the shadows. The shadows are super deep and dark and that’s why the pop-up flash came up, to give us a little bit of fill light. The thing is, that fill light is not going to look that great.

Let’s look at the other settings that it’s done. It’s basically shooting this at F2, okay, and 1/200 shutter speed, and that’s probably, basically so we can get the shutter speed down so we can fill it with flash. That’s why it went up to F2. Typically, in this kind of portrait mode, it’s actually going to use a lower aperture when it’s not encountering a scene like this with these crazy hard light.

Let’s do this. This is what most people that are basically starting out in photography, they know to do already. What that is, we’re going to place Whitney’s back against the sun. On this side, the sun acts as a nice little hair light. Now, when I take the shot, let’s go ahead and pop the pop-up flash down, and we’re going to scoot back just a tiny, tiny bit. It looks like we’re still getting pop-up flash. Every camera is going to treat these scenes just a little bit differently, okay.

Right now, the pop-up flash came up. If I get closer and I eliminate a lot of this backlight, the camera might not freak out and it might give me a natural shot, so let me get close, there we go. We got it. We had to get very close, but we got it.

What happened was when we got close, basically, we eliminated that heavy, heavy backlight, so the camera, internally, said, okay, now that I don’t have that backlight, it’s okay, I don’t need the flash, and it took the shot regularly. Basically, it dropped down to F2, and it used 1/1000th of a second at ISO 100. Again, the reason why it’s going down to F2 is it is trying to create that separation from the background. When we’re shooting portraits, we typically go to a lower aperture, we want to create that separated background blur.

Quick Tip: Wait a second, Pye explained that really, really quick and why the two shots differed, so let’s just quickly review this. Let’s try to understand what the camera is doing for a second, in automated portrait mode. In that first shot, the camera popped up the flash, because it saw a very dramatic difference between the model’s face, which is in the shadow, versus that super duper bright, super backlit background. The camera says, “well, I can balance that out. Let me use a little bit of fill flash from the top of the camera to get a better exposure.” Using the pop-up flash to fill the shadows like that, OK, it’s better than having a model with a dark and underexposed face, of course. You know what, we can get a more natural and better look, just by exposing for the skin, not using the flash, and then letting the background blow out a little bit.

But, Pye is still in full auto mode with a portrait setting, so how would he do that? Well, he stepped in a little bit closer to the model. What that does is eliminates that bright background that the camera was seeing. Once that was done, then the camera can focus on the exposure and settings just on the model’s face. Voila, it yields a much more natural look. Again, the camera is still in full auto. We’re just working a little bit to help it understand what we need it to do.

Okay, Olivia, you’re going to come in and step right about here, perfect. Now, Whitney, look towards me, my dear. Okay, light her up with that full goodness, and kind of try and direct it right only to her face right there. Whitney, you’re going to go chin-down a tiny bit, there you go, right there, beautiful. OK, we got a great shot. Again, this was all done in just this automated mode. The one thing here is that I don’t really have control over where it’s focusing, which is kind of fine, I think it’s going to get it right on. For the most part, it exposed it perfectly. The histogram looks absolutely amazing, and the in-camera, automated portrait mode worked incredibly well. We just had to set up our lighting and do the work for the camera, because the camera can’t change your lighting, it can’t pose your model, it can’t choose the composition, it can only expose the shot. Here, when we gave it that final shot, it actually looked really nice.

Let’s go down to 1/2000th of a second. We’re going to keep it. We could have just used the automated setting because that’s what the automated setting gave us, but I want to make sure we dial it in correctly, here. We got our shot and now what I’m going to do is I’m going to go ahead, and we’re in this lovely scene. I’m going to actually play around with some different props. We might go to a white hat and do some other stuff, too, using the exact same settings, the exact same lighting, and so forth. You guys can check out those images, but I want you guys to go out and do your assignment. The assignment this go around, well, it’s of course to go out and shoot a portrait. I want you all to start shooting that portrait first in the portrait mode. Use your automated mode and learn how it works in your camera. Some cameras will be a little bit different from others. This camera basically gives me no controls whatsoever, while other cameras may allow you to control, say, the focus or ISO and so forth. When you’re in that scene, set up the scene, set it up for the best light, set up everything so the camera is not making compositional and artistic choices for you. Let the camera just do the exposure. Afterwards, switch over to manual and try the same thing. Guide and direct the camera to get the right exposure using one of the techniques that we’ve shown you.

Exercise: From Auto Modes to Manual