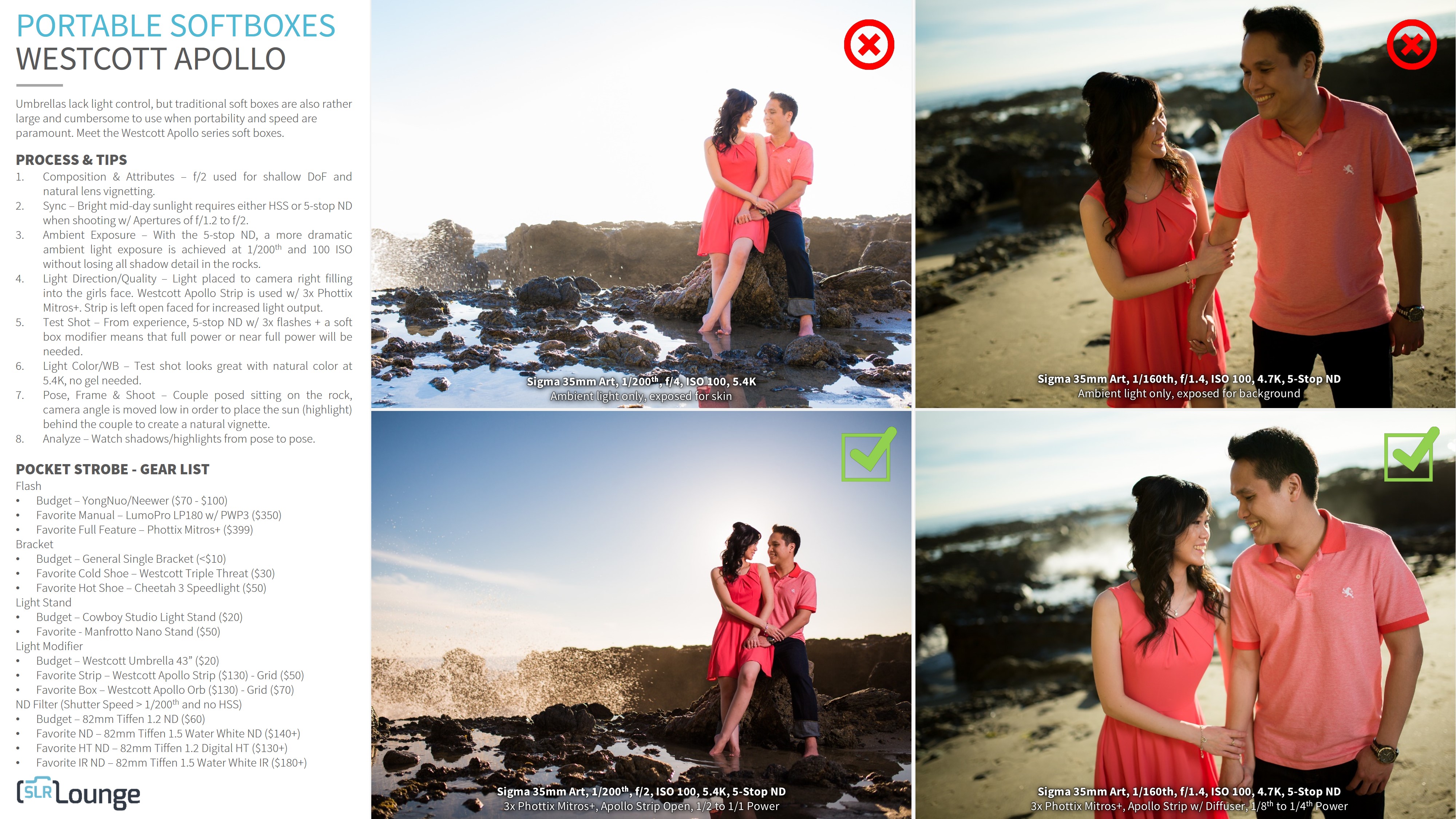 In this video, I’m going to introduce you to my favorite portable softboxes for pocket strobe modification, the Westcott Apollo series.

When we’re modifying pocket strobes in bright sunlight, one strobe, one of these guys, is simply not enough power. That means that we needs a stack. So what do we do? We have three Phottix Mitros, and we’ve placed them onto the Cheetah hot shoe bracket. Now, of course, for these flashes, you don’t need the hot shoe bracket. We just have this Cheetah hot shoe bracket because I used to shoot all manual strobes. Either way, with those set up, we place them into the softbox, and you have them firing into the silver side.

Now with midday sunlight, even with three strobes, if we’re firing into the back of that modifier, the light coming out is not powerful enough to A, move it far from the subjects, and B, to modify further, meaning that we can’t really put a diffuser on it, we can’t really put a grid over it because it’s just not enough light coming out of it. With three strobes and this kind of a bright scene, and this is even like an hour before sunset, so it’s not like, the sun is out of course, but it’s not like the brightest part of the day. It’s starting to get a little bit darker. Even in this kind of a scene, we’re not getting enough light to say modify and to cut down via diffusing and all the other stuff.

Let’s talk through these actual shots and give you an idea of how we shoot them.

We’re taking these images, we’re shooting on a Sigma 35mm Art. It’s a fantastic lens, and I love shooting wide open on it, anywhere between 1.4 to F2, okay? Now I’m using F2 here just because I want a little bit more depth of field so we can see a little bit of these rocks kind of behind and so forth, but I love that wide open look. Anywhere between 1.4 and 2 gives you not only that shallow depth of the field, but it also gives you a natural bit of lens vignetting. That’s absolutely beautiful and just kind of pulling attention into the wanted area of the image. It just gives the edges a nice rich look to it. I love that look. That’s my compositional attribute number one.

Now, of course, we’re shooting in bright sunlight, and bright sunlight is going to require either high-speed sync or a 5-stop neutral density filter. Am I holding the 5 right, 5-stop neutral density filter, okay. When we’re shooting, and especially when we’re between opters of 1.2 up to F2. In these scenes, we’re using a 5-stop ND.

Now again, my preferred method of shooting is to use ND filters. I find that I like using ND filters over dealing with the light loss that comes with shooting in high-speed sync. I don’t want to worry about light loss. I want to shoot with the full power of the strobes and modify with that. I don’t want to worry about losing light based on different shutter speeds and so forth, okay, so I prefer NDs.

The ambient light exposure is achieved with the 5-stop ND, and we get a more dramatic kind of look at around 1/200th of a second iso 100, so here we’re at 1/200th of a second F2 and iso 100. We’re shooting at 5400 degrees kelvin with our 5-stop Tiffen neutral density filter. Okay, so this is that look that we’re getting.

Now for the light direction and quality, what we’ve done here is that we’ve placed the camera to the right. Why? Again because we want to fill into the girl’s face, and also I wanted to match the existing light direction in the scene. Why? Because I want the light to look like it’s wrapping, like it has shadow. If we go against the existing light, then what ends up happening is the shadows have light in them, so you end up looking like you just flattened out the subject with direct flash. Look, the ambient light in this shot, you can actually see the ambient light is coming a little bit stronger from the right side, so we’re matching that light, so that way when it falls off to the left side, we get a little more shadow, as you can see down here.

Okay, so we have our test shot. We’re using our three flashes. Now just from experience, know that if you’re shooting midday sun with a softbox with three flashes, three pocket strobes, you’re going to be at 1/1 to 1/2 power. I mean, that’s just it. You’re just not getting enough power to lower the camera settings any further, okay, or lower the flash power any further. Just know that typically when it comes to a scene light this, I’ll pop my first shot just at full power and just see where I get, and that’s where you really benefit by having strobes that have a faster 1/1 recycle time because in scenes like this, pocket strobes just have to be used close to full power.

Okay, so we get a great light color at that 5400 degrees kelvin. I love the kind of warmth that we get on a subject. I love the background and kind of how nice and blue we have the sky and everything. It looks great, so we don’t need to do any gel modification.

Now from here, we pose, we frame, we shoot, and if you notice something again. Once again, I’ve placed my subject in front of the brightest point in the scene, okay? I have them on that rock and I get low to put the sun just behind them. We end up getting this natural beautiful highlight right behind them which naturally vignettes towards the edge of the image which the lens again kind of accentuates a little bit further, and we just get this beautiful light kind of coming through. I shot right when this wave came up. We get a splash, the wave is backlit, they’re backlit, everything looks beautiful. It looks fantastic, and that light is coming from camera right with no diffusion and no gel, and it is very close to the subject still, so the camera is just out of frame on camera right. That’s kind of what you have to deal with when you’re doing pocket strobe modification in bright sunlight. Your modifier needs to be very close. Your light source needs to be very close to the subjects and you’re going to be full power, and you’re not going to get a lot of diffusion.

You’ll notice that the light wrap, it has kind of a sharper shadow edge to it, and it kind of has more of a specular look because we’re using the silver side without the diffuser, but it still has a great light quality. I still dig it. We just want to watch to make sure that we’re not casting any shadows onto anybody that looks unnatural in any way, and so what I’ve done is I just make sure she’s leaning a tiny bit forward, so he’s just a little bit staggered where he’s a little bit behind her, she’s a little bit forward, so when that light hits, he doesn’t cast a shadow onto her, and it looks really beautiful. It looks really nice. Okay, just analyze, watch the shadows and look at them from pose to pose.

Now for this right shot right here, it’s basically the same scene. It’s the same scene, same everything. All we’ve done is I’m doing a walking shot, and I wanted to demonstrate this too because it’s one of my favorite techniques to use for what we call, I mean, if you’ve watched the Natural Light Couples Photography DVD, we called this the reflector chase. In this case, we just call it like a softbox chase, okay? We’re just chasing the couple basically with a handheld softbox. With the same Apollo strip, I had my lighting assistant holding it. This time, we’re shooting even closer to the couple because we have a very tight crop, so this go around, because of that, I put the diffuser onto the Apollo strip.

Okay, so we have the three Phottix Mitros, we have the diffuser, we’re again roughly around the same settings. We dropped open to F1.4, we’re at iso 100 and 1/60th second for shutter speed. Why are we going a little bit brighter in this shot? Well, because I wanted to have that kind of natural light and airy look that would fit kind of this candid pose and expression. It’s kind of a very lifestylesque type shot. If we shot this to look dramatic, it’s going to look weird, okay. Again, match your lighting and your ambient to flash balance based on the look that you want to have and the feel that you want to have in the image. This image, we wanted to have that dramatic environmental portrait. We’re shooting wide. It’s not necessarily about the couple themselves, it’s about the couple in this dramatic and amazing scene.

Here, this is all about the couple, and it’s about their expression and it’s about their enjoyment, and if we darken down the background and if we burn everything down so that it’s very dark and dramatic, it pulls you away from that. It looks like this fun and happy go-lucky scene in the middle of a scene that looks very dark and dramatic, okay, and so you get these kind of two juxtapositioning elements to them that I don’t feel like looks very good. What we’re doing here is we’re opening up one stop with the aperture. We’re opening up about a third of a stop on the shutter speed. I’ve lowered the white balance just a little bit to 4700 kelvin. We’re still on our 5-stop ND, so we’re just about a stop and a third brighter, letting a little bit of the background blow out, a little bit of it go white. This is with the ambient light only exposed for the background to get that kind of desired look, and then we pop the strobes. This time, the flashes are very close to the subject just off to the right, diffused with one-eighth to one-quarter power.

Again, look at the difference here. Over here, we’re not lighting that much. We’re just using this, we’re using this almost like we would that silver reflector that we used in the reflector chase back in the Natural Light Couples Photography DVD. It’s the same amount of light that we’re adding in, but what we get with the Apollo strip and with strobes is we get a more consistent light, because it’s easier to just sit there and aim that at the clients as they walk than it is to try and catch reflector light and bounce it into their faces, not to mention reflector light is going to cause them to squint because it’s a constant light. This is not constant, and so we can just follow and just pop shots at a lower power for a very natural look to simulate that without getting squinty eyes, without getting unnatural lighting because basically the light is moving from shot to shot and so forth.

It gives us several advantages over using a reflector to do our traditional reflector chase just using the Apollo strip box and doing a softbox chase. Okay, so that’s kind of our set-up right there.