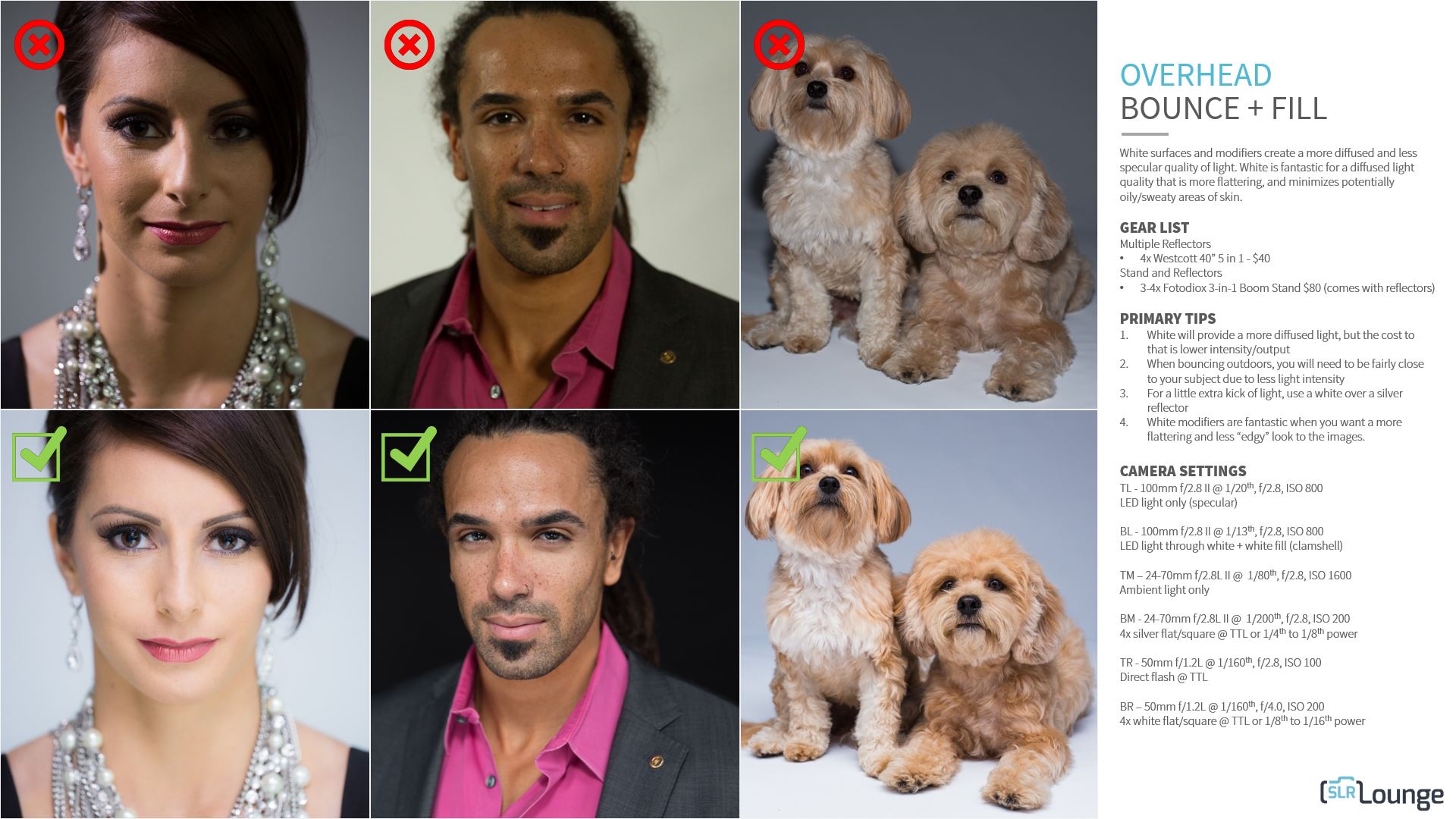 Now, in the last tutorial we used overhead bounce to create a very dramatic, and kind of cool look with our fitness images. Overhead bounce can be used in so many different ways. For beauty, for fashion, for portraits, for puppies. Oh yes.

We can use if you like, four Wescott reflectors. The thing is, you’re going to need stands to hold those reflectors. You could buy the stands separate or what I would probably recommend is getting two stands, of the Fotodiox stands that come with reflectors. Then just getting two Wescott. That way you have two oval ones, and you have two circular ones that you can use on top and bottom and so forth.

We are going to create a sandwich setup. That’s going to cover the techniques on the left side. With our little puppy shot, I thought I be even more adventurous with that. Rather than using any type of reflector that you’d buy, we just did it DIY style. I want to shoe you guys that light modification is super easy to do guys. If you don’t want to bu something, that’s fine.

You’re going to need to buy at least foam or something like that. For these jobs all we did was just use foam insulation basically, to create the same kind of box. It was extremely inexpensive, I think it was like ten bucks to get it all the foam insulation. We just cut it up, it works perfectly.

Remember that light modification, while you can buy all these different like tools and things. It makes it simple because it saves time, you don’t have to make it. You can DYI in so many situations and save money by making your own modifiers.

Same stuff, same thing. Just want to reiterate. Tip number two is to watch  where the lights falling. I always recommend starting with one light, adding a second fill and than adding additional ones as you need. Always start with one first, and see what it looks like and adjust from there. Watch  what your fills, watch  all this other things and watch  basically the highlights and how they’re landing.

This goes into the refinement of your lighting, okay. When you practice these techniques I want you to take a shot and then study it. Look at if the highlights are two strong along the foreheads. Look if the fill is strong coming up from the chin. Look at all these things and make small adjustments here and there. Just to kind of tweak and modify before going forward.

Lets go ahead and talk through each of these setups. Over here on the left. We have our clam shell lighting set up. Basically this is a paramount light setup. We have, well this shot actually is coming from the left, this is a split LED light. We are just trying to show you, really all we’re showing you here is just, that if you do split lighting without a modifier it looks absolutely terrible. I don’t know. What are we trying to show you.

Look at the bottom one, okay. With the bottom one we have paramount lighting, we have LED light placed above head. We have it going through diffusion, and we have a fill below. Its a paramount light with a fill. What does that become, clam shell. We get beautiful soft natural light and that is all I want to show, just how soft that gets. We’ve talked about that before. I am going to go a little bit quickly through that one.

That’s one of the overhead fill, bounce fill techniques. While we did here with an LED, you can do the exact same thing with flash. The way this is going to work is how we’re going to do it in the second shot.

The top image right here, this was taken during Branden during that same portrait session where we did all the fitness and all the other stuff too. It was on a 24-70 at 70mm zoom. This is the Mark II by the way. Number 70, Mark II. This is at 1/80th of a second at 2.8 in ISO 1600. This is what that shot would look like if we just used the natural ambient light. Pretty terrible. Quite craptastic. Not good.

The bottom shot though, this is at 1/200th of a second at F2.8 in ISO 200 and what we’ve done. Is we’ve place four reflectors. We have two reflectors on stands on the left and right. We have a reflector overhead and a reflector underneath. What is this doing?

With the flash, and for this type of a shot, you don’t need to use a grid. What you want, is anytime your placing the flash close to, like the modification that you are going to be using. You want the flash to absolutely open up and to fill that entire modifier. I am not going to use any zoom even at all. I want actually just widen this out. I am going to use zoom, I am just not going to zoom it in.

I am going to zoom it to 24 millimeters, so that way when it hits that top modifier. It spreads out, it opens up, okay. Otherwise, it is only going to hit the modifier in a small place and its going to come back, and its going to be a smaller light. Which we know, a small light is going to be harder light. We bounce into that top reflector, then it comes down and bounces into the bottom reflector. All the meanwhile, we have the left and the right sandwiching reflected. Which captures light from the left and right and throws it back in the face.

With four reflectors all around the face. I think I almost said flace, by the way. The four reflectors all around the face, what type of light do we essentially create? We’re basically creating a square, or a flat light setup. We did it with basically one overhead light. The light is actually bouncing up overhead, our on camera flash. It is coming around and its creating flat light which goes in, and it looks awesome.

We do this type of setup all the time for head shots. Not only with Branden, with other people. It works fantastically well. It creates beautiful caps light. It creates fantastic look. If you watched the Peter Hurley F Stoppers DVD, which is a fantastic course on head shots. Then you’ll know that he uses a similar flat light setup.

He sets it up a little bit differently, but it is the same type of quality of light. Okay now, if you like doing head shots, I highly recommend checking out that course. It is a fantastic course on getting the best poses, the best expressions out of your models.

If you want a more specular light for this type of a setup. Use silvers. I think for Branden we actually ended up using silvers. It you want a softer look with the light, than use whites. By the way, it is not going to be a huge difference, because the is so much light coming in. Its just going to be a small difference in specularity. Not so much in wrap, the softness verses the hardness. Its going to be very similar, because all of the lights are the exact same. The distance of the light, or the modifier to the subject is the same.

It is still large. It is still going to be a very wrapping light. It is just going to be a little more contrast, verses a little bit less contrast. Fantastic setup, super easy to do. Basically all we have on the bottom is 1/200th of a second at f/2.8 ISO 200. This is four silver flat square setup. You can run TTL on this, but again, I am not going to tell you not to. Just don’t.

We run 1 quarter to 1/8th power on manually, 24 millimeters, get beautiful exposures every single time. All right, with that technique. You can do the exact same thing and create either paramount or you can create calm shell. Paramount remember is just one light over head. Clam shell is paramount plus a fill. All we do is subtract the left and the right reflectors. If we take the left and right reflectors out and bounce into that top we get this exact look, but with our on camera flash.

Lets mover to the puppies. Now with the puppies, I want to do something a little bit different. I don’t want to use the same exact lighting techniques. I want to show you guys that we can modify with whatever. Okay?

The top shot, direct flash, this is on a 50mm lens, F1.2 L. We’re shooting at F 2.8, 1/160th of a second and ISO 100 and direct flash and TTL. Look at the dogs, they look angry with me. They look veritably pissed off that I direct flash them. Unhappy. Then, I go okay, so what we are going to do now. We’re going to show you guys that light modification can be simple and incredibly cheap.

I took the foam cord that you get, or not the foam cord. The foam insulation board that you get a Home Depot and I just made a little box out of it. It is a little foam fort if you will. Okay. I’m using basically, one piece on the sides and one piece over. Then I’m using the, our white little paper background. Our seamless paper, that’s my bottom part.

Then I am just sitting inside of it and I have the dogs just placed in front of that. All I am doing is the same thing I did before. Just bouncing from the top, and than it wraps all around and goes right into the puppies. These puppies are actually my partners puppies. I have his wife, Yvette there helping me to kind of, place them into position and play with them, and do all sorts of things.

We get these beautiful looking shots, they look fantastic. Same exact techniques guys. Beautiful light, really bad light. Same flash, $10.00 of modification and we get to this. So, what the point of this?

Again, you guys can go out and buy reflectors, buy stand. Buy those things because they make your life simple. Don’t feel like you have to. If you want a DYI it, if you want to make your own. Fine, the technique to light and to modify are identical. Regardless whether you’re buying your modifiers or making them on your own.