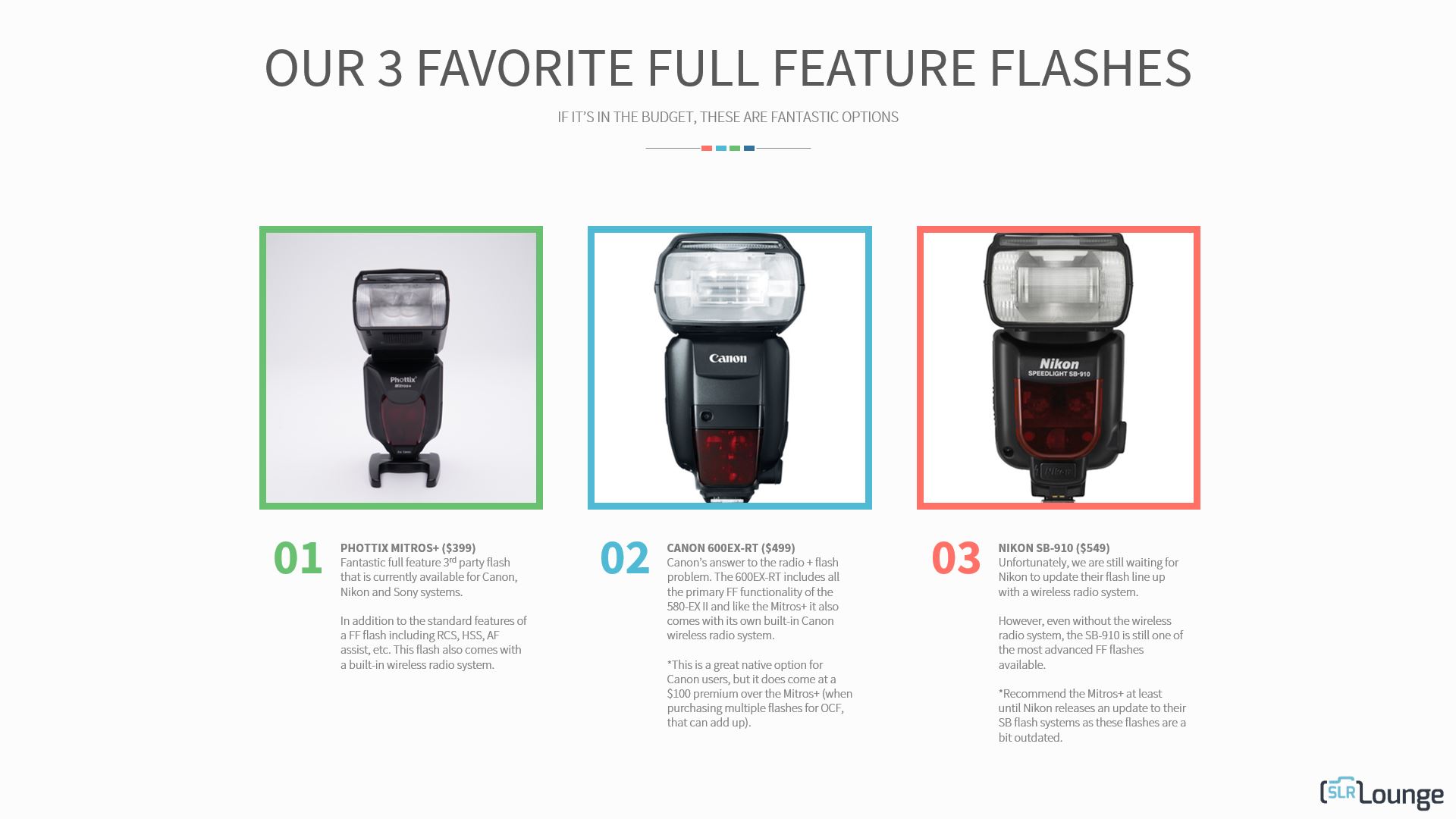 Our three … Well, this is really my three favorite full feature flashes. Really, I only have kind of two favorites. I threw the Nikon in there just for, I don’t know, giggles. Listen, I want you all to know right now that my butt is exceedingly in pain because I’ve been sitting on this crazy uncomfortable stool for like eight hours recording this. Hopefully you appreciate this workshop. If you do, write to me and say, “Pye, it was well worth your butt.”

My three favorite full feature flashes, starting out number one. The whole reason why number one, the Phottix Mitros +. This guy right here. It’s $400.00 and the reason that this is my favorite full feature flash is because you can get it for both Canon and Nikon systems. As other systems become more popular, I’m sure they’re going to develop and create a functionality for those as well so you can get it for other systems too.

It’s inexpensive, compared to the other options. This option is $500.00, this option is close to $550.00 and it doesn’t even has as many features. It’s less expensive but also it includes a built in radio so not only can … Most flashes, like let’s say the Canon … Or I’m sorry, let’s say the Nikon SB-910. It can control off camera flashes so long as they’re within sight basically, so long as it has infrared capability and has that infrared visibility.

With radio triggering though, like say via a pocket wizard, you can go out of sight, you can 100 feet away, 200 feet away. Whereas with infrared you’re limited to say inside of a studio, 10-15 feet, and you have to have line of sight. Now, flashes like the Mitros + have a radio built in and the other great thing is that this has a radio controller built in as well. From the back of the flash I can control up to three other off camera flashes.

In addition to all of other full features that this has, I have fantastic flexibility between Nikon and Canon systems, I have a cheaper price, and it works very, very nicely. That makes this my favorite full featured just flash in general. Especially talking about third party flashes.

Now, let’s move to my second favorite, which I would say to be honest, and let’s take this mag mod off. People are going to think that the mag mod actually comes with the 600RT and it doesn’t. It doesn’t, it’s a separate modifier, guys. This is what it looks like without it. The 600EX RT, I love this flash. To be honest, if money weren’t really a factor, I would probably say that this is …

Well, if money weren’t a factor and if you’re shooting on Canon, I’d say that this is my favorite flash system because it has the same built-in radio trigger but … Well, it’s not the same radio trigger but it has its own radio triggering system, it has its own control system, and everything on the UI is just a little bit more refined. The entire flash is just a little bit more refined but with that comes an additional $100.00 price tag.

Now, I’ve thrown in here the Nikon SB-910. If we were talking about this subject two years ago, before the 600EX RT came out, I would have put the Nikon SB-910 far ahead of anything that Canon had. Nikon has been really at the forefront of developing advance flash systems for a long time and as a Canon user, I’ve always been jealous of that. Nikon flashes kind of make the Canon systems look more like expensive toys than anything else.

The problem is that this hasn’t been updated for quite a while and with the 600EX RT that’s come out, we now have built in radio triggering and radio control. The SB-910 has not been updated in a long time, it doesn’t have those features. It only has infrared capability. Yes, I can control off camera flashes with infrared but there is no radio triggering system.

While the other features are fantastic, given that it doesn’t have this ability, it kind of has too high of a price tag. It’s a fantastic full feature flash, don’t get me wrong. It works incredibly well and it’s more advanced than say Canon’s 580EX II but it’s $550.00, and the 600EX RT is $500.00, and the Phottix Mitros +, which again will work on both systems, you can get different flashes that are compatible with each, is only $400.00 and it has a radio trigger and radio system built in.

That’s why while I put this on this list, I kind of hesitate in recommending it. It’s still a fantastic flash but if you are shooting Nikon, I would highly recommend at least for right now, either go with the Mitros + system or just wait until Nikon updates the SB-910 but don’t go overloading on SB-910s because it’s been a while since they’ve been updated.

We’re waiting for Nikon to put out their own radio triggering system. I have full confidence that when they do, it’s going to be probably the best thing on the market because Nikon cameras, flashes are absolutely fantastic. I have nothing bad to say about them, so can’t wait for that. For right now, stick to these two