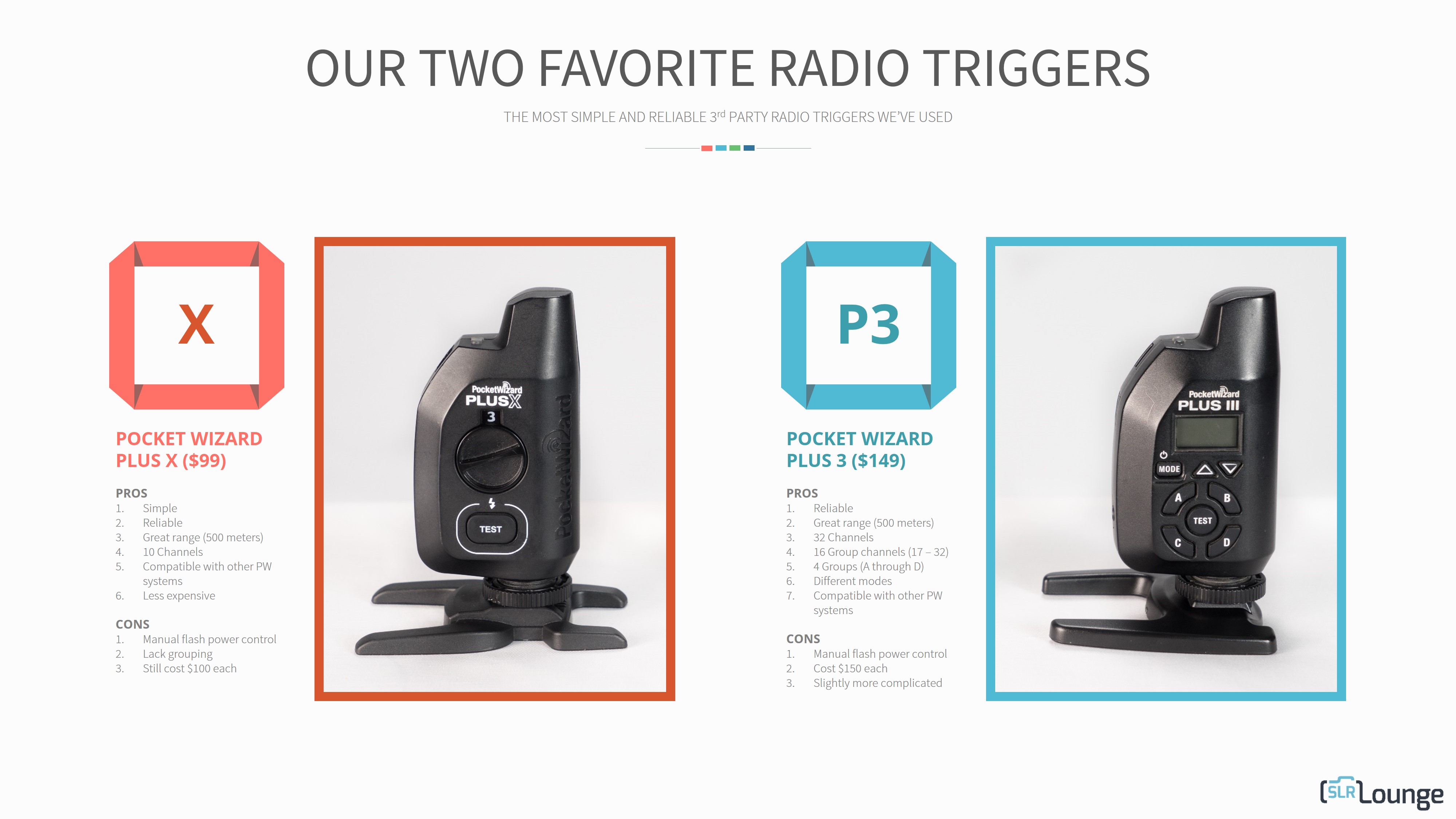 Guys and girls, let give me you all a quick note on our recommendations. We do not recommend products that we simply get for free. I know a lot of you think that, but we don’t do that. Reason being is that we’ve gotten tonnes of products for free that don’t work. They are very crappy products and we don’t want stand being anything that isn’t good. Instead, what we do is we buy all of our equipment first. We buy and we use what we want to use and what works well. As we’ve tested things over time, then we get in touch with the manufacturer and we tell them that we want to support that product. That is the way that we work. Anything that we recommend, we wholeheartedly are standing behind. That’s why when it comes with four other flash options that are honorable mentions that will work, we tell you, there are going to be certain issues with them.

Likewise, when it comes to this stuff, our two favorite radio triggers, we tell you we use pocket wizards because we’ve used tonnes of radio trigger systems and they come with consistency issues and reliability issues. It’s a hustle on set, when you are shooting and things aren’t working right and it really throws you out of your rhythm. Pocket wizard is the only brand that we’ve used that’s worked consistently and that’s why we recommend it. We just want you to understand that everything that we recommend is based upon our shoots. We take things on heavy and extensive shoots before we are willing to stand behind it. All right now let’s talk about these two radio triggers. One other quick note is that when you are buying inexpensive flash systems like say the Yongnuo and the Neewer’s. I would highly recommend just sticking with the factory wireless controllers for those because generally they are designed to work pretty well.

The factory wireless controller is going to work pretty well with that unit. Whereas the third party control is going to be more expensive. If it’s more expensive is kind of like why are you going that option in the first place and it might not work as reliably. Okay so, just keep that in mind. When it comes to flashes like the Lumopro LP 180, when it comes to the Bolt VB-22 and other manual strobes that we want to control reliably, we look to pocket wizards. We have two options on the pocket wizards side. One is the pocket wizards plus x for 100 box. One is the pocket wizard plus 3 for 150 box. Now both these are fantastic options. They are both just as reliable as each other. They are both just as consistent and have the same range. They do the exact same thing. These are both manual triggers. Which means that they don’t send information for power or for zoom or for anything else. They don’t do TTL. They don’t do rear curtain sync. Any of that stuff is not done. All that these do is just simply send a signal, to fire a flash and that’s it. This one is a little bit cheaper. Why is that? Well it’s a little bit more simple of a unit. Basically, what they’ve done with a Plus X, is they’ve given it, first of all, a cooler name because frankly Plus X, sounds like it’s like plus extreme. I would love to say that. Like all my shoots. Give me the PocketWizard Plus Extreme, yo. I don’t know if it’s actually the extreme but I think that’s what it stands for. Personally, that’s what I make it stand for. Anyway, they simplify it so they took away the channel grouping to it. Okay so over here … I’m sorry not the channel grouping. They took away the grouping functionality. They kept channels but they took away the grouping functionality where this guy has a grouping.

They also took away the number of channels. They just made it a little more simple. It doesn’t have all of the features that this guy does but they charge 50 box less for it. Now if you need to buy 4 or 5 of these units that 50 box can add up. It’s a $100 and 250 saving over the course of several units. It’s very simple. Has 10 channels built in, has a simple test button. It’s just pop it out, plug it in and turn it on and it’s going to work. It’s just very reliable and super simple to use. The only con is that again it lucks grouping and both of these are manual flash power control. That’s not really a con of either one specifically is just both of them are only manual control. This still costs a 100 box. It’s not necessarily as cheap as just other third party radio options but you know what, for the reliability and simplicity of what it is, it’s a value still even at that price.

Now the plus 3. The plus 3 we have 32 channels. We have 3 times the amount of channels and both these options will work with legacy pocket wizard items. If you have legacy pocket wizards with the old 4 channel systems, or one channel systems and so forth, these still work in conjunction with those. These guy have 32 channels, both of them have the same range. They can go up to 1500 feet or 500 meters. Which is generally far more than you actually need. Unless you are shooting in big arena. This one also has 16 grouping channels which is basically channels 17 to 32. Those are grouping channels. Channels 1 through 16 are what are referred to as legacy channels. Meaning that you can use them to control legacy pocket wizards and do that channeling and so forth. You can’t control groups when you are on channel 1 to 16. You can only control groups from 17 to 32. It offers to you 4 different groups. Which means this.

This is a our typical reception set up. I have 4 corners of the room. If I’m facing the front of the room I go left side is going to be A. Right side is B. Back right is C. Back left is D. Okay so A B C D. They are all on channel 17. Then A B C D. Now using my pocket wizard, I can just press A, when I want to use only A, or I can add B when I want to use A and B. I can press A B C and use all 3 in conjunction, or I can turn around, turn off A B C, and only use D. All of them can be triggered directly from my system. My hand held system with my handle pocket wizard right there. I can turn on and off, any or I can basically use any one, or any grouping that I choose to. Whether it’s 2 of the flashes, one of the flashes or four of the flashes or whatever I like.

It’s fantastic because I’m constantly turning and using these different flashes in different positions for backlights in my shots. That is kind of just a practical usage of groupings which is very handy. Remember that even with grouping you can only control … You can only basically turn on and off the functionality. Again we still don’t have power control or anything like that. There are still fully manual systems. They only send the signal to fire or not fire. Okay. Along with these comes also different triggering modes. For example I can have these be a transceiver or TXRX. I can turn it on to receive only. To transmit only. I can have it be an extender so I can extend the range of the PocketWizard plus 3 if I put one in between a long distance. The Plus X doesn’t do those things. These are advanced features that come only with the plus 3.

Okay so the main con to this system is just that is 150 box a piece and it’s going to be a little bit more complicated. Again it’s still an extremely simple user interface everybody. Once you understand radios, it doesn’t matter if you are using a Phottix Odin or you are using a pocket wizard, or you are using any other third party system, they all operate the exact same way. They have channels. Channels allow those different receivers to communicate with each other. Anything on the same channel, will communicate with one another. Then they have groups where yes, you can communicate everything in that same channel is communicating, but you are turning on and off specific groups within that channel. That’s how they all work. They all work identically regardless of the brand and the make. Pocket wizard makes theirs incredibly simple to use. The user interfaces are absolutely fantastic. They are phenomenal.

Actually, among radio triggers they are the best user interfaces that I’ve seen. They are very simple and great. That is our two favorite radio triggers. We use pocket wizard when it comes to all third party triggering. Otherwise, we are using factory systems like with the Phottix Mitros plus which is kind of a go to flash.