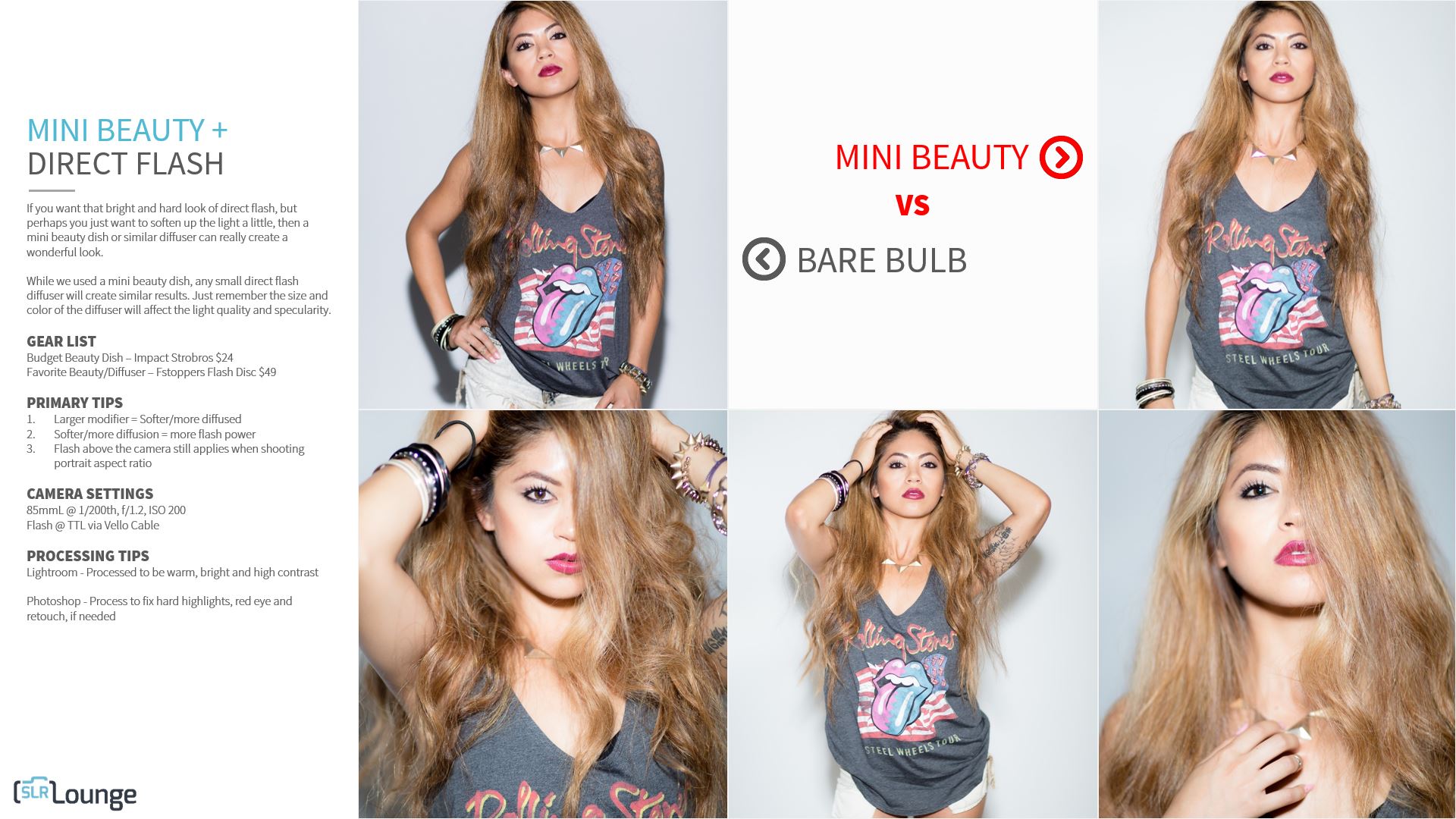 All right. We are taking that same direct flash shot with Yoko and now we are going to modify in this video, with a Mini Beauty or basic kind of modifiers that we would classify, as a Mini Beauty Dish. Starting with the actual Mini Beauty Dish, this, the Interfit Strobie.

All right, this little guy is like 25 bucks, super inexpensive light modifier. It’s also quite cheaply made. I mean it works totally fine, but one thing remember is that, you always want to make sure this silver thing is over the flash end. Let me show you how to use this. What we are going to do is take our flash.

Again, we still have the bracket, we still want the light coming top to bottom especially when we are shooting portrait aspect ratio. All I do is apply this; I’ve a little bit of Velcro on the top of my flash head just so that it sticks a little better. Sometimes when you are shooting though, this little kind of balance can actually rotate a little bit.

Just make sure that it stays in the front of the flash, because you want the flash light to actually bounce off the back of this and then spread around this diffusion. This little white diffusion and then on to go onto your subject. Now, in talking and studying modifiers, can you guys guess, what is this modifier going to do when compared to that basic direct flash?

My favorite in this category is the FStopper Flash Disc, because this is around 50 bucks. Now, it’s double the price of this guy. Now, first thing, let’s compare the size of the FStopper Flash Disc to this miniature strobie dish thingy. Okay, so we have roughly two to three times probably the surface area as this guy, which means that it’s going to be a softer light.

Also, when talking about kind of the versatility of this guy, on the back side of the flash disc we have that grey card, so we can get a nice little white balance on whatever scene that we are shooting in. We can fold this up so it stays quite small and miniature. It has a little pocket that you can put, so you can literary stick this inside of your pocket.

It fits really anywhere into the bag, whereas this guy is going to be a little bit bigger, it doesn’t fold up and so forth. For the light quality and for the usage and kind of the portability of it, I would go with this guy. For this shot, we used our little impact strobie. Actually, I think it’s called the [Strobe Rose 00:02:41]. Strobe Rose, Strobe Rose. I think strobie sounds better. Who comes up with these names, such crazy names for stuff.

Remember if you are shooting manually, you are going to need to power up in this instance. With this modifier, we did have a little bit of an issue at certain times with the TTL functioning correctly. If you do have issues with this type of modifier, again go to manual. With TTL, we are dialing up the exposure compensation just a little bit, or you can shoot in manual.

I think you probably around like one sixteenth flash power, one eighth flash power. Again, depending on, what camera settings you are using. For this as well, we have the flash above the camera, this still applies. We are still doing the same things. We want to make sure that if we are shooting portrait aspect ratio, the camera is still on a bracket so the flash is above the lens.

All right, now for our settings, we have our 85 mil it’s the same thing across the board. This time though, we went from I think F2 or F2.8, we dropped down to F1.2 and ISO200. Now, what this allows you to do is create a very soft kind of fall off, again from that [strobie 00:03:58]. Especially when we get close, you can see that at F1.2, we have this great focus on her eye.

Great focus on her eye here and that hair just kind of falls out of focus and it looks really kind of cool, especially with that direct flash look. Look at the difference here. I want you guys to see this. Probably the best example of the difference is between, well these two shots. Look at this; this is the Mini Beauty on the right and on the bottom.

This is Bare Bulb on the left. The Bare Bulb we have that hard edge shadow which looks great again, it’s just a different stylistic look. Look at over here on the right, look at the shadow behind her, how soft it is. It’s very subtle and it almost is getting close to looking like a ring flash, getting close to that area but this is a beauty.

Compare this now to this, and you can see exactly the shadow still coming from the exact same place. It’s still coming top down. Look at how much softer the shadow transition is along the wall, look at how much brighter that darker the shadow is. It has this beautiful effect of basically diffusing the light a little bit more and softening, opening up the size of the light, so that that transition from shadow to bright areas, is much more subtle.

Those shadows themselves are much more subtle as well. We can still tell it’s direct flash though, because if you look underneath the chin in all these instances, we still have that kind of strong edge underneath the chin there. Again, it’s not as strong as the first shot. You can see that on her face, it looks more diffused. The highlights are more spread and it’s more evenly diffused across the face.

This is a really cool direct flash modifier. Just remember, that anything that’s roughly like this, is going to do something very similar. The FStopper Flash Disc, is going to do something very similar. Again, we are going to be using this quite a bit not only in this workshop, but also when we get to lighting 201. More so, the FStopper Flash Disc because it’s very versatile especially with off-camera flash.