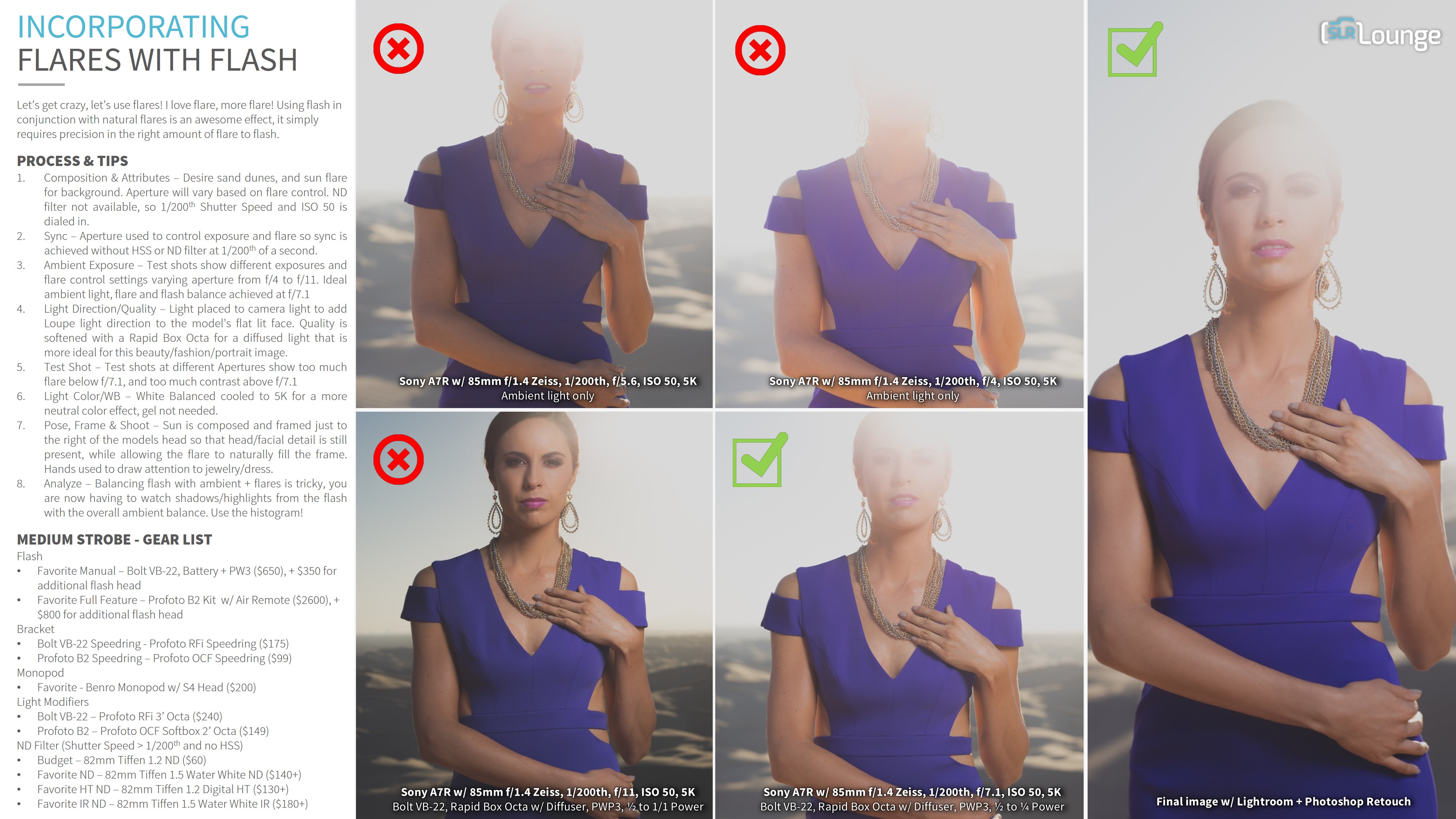 This is kind of the ultimate balancing act when it comes to ambient versus flash exposure and that’s why we’re saving this technique towards the end of this chapter because it’s a complex one. It’s going to be complicated, it’s going to take you several tries to get this right but it’s a really cool technique and hey who doesn’t love flare? I mean Star Trek showed you just how awesome flare could be in literally every single scene. It was awesome, I was thinking more flare bell at the end of that kind of more cow bell but more flare bell.

Okay, let’s talk about the scene we’re out with Yvette in the desert again and what we’re trying to do, what we’re trying to achieve here is having her back towards the sun and going for this lightened area look where we have this flare blooming into the camera that makes her and her face a little bit less of a priority compared to the dress and compared to the necklace and everything else in that scene. Easy enough to kind of envision not very easy to pull off. let’s talk about the composition and the attributes for this particular shot. Now, again our desired background is the sand dunes and we want this sun-flare to bleed in from the background and wash out Yvette’s face a little bit so that the final image becomes this very lightened area image where we can see Ivette’s face but it draws attention away from the face into the dress a little bit.

Our focus, the contrast is the necklace and dress and so forth. That’s the final result and it’s sounds easy enough to envision like the envisioning of it is like “Oh, that’s easy to do,” but when you start doing it you’re like “Man, this is kind of complicated.” Why? Because it becomes a balancing act between having just enough flare versus just enough flash versus just the right ambient exposure and so forth. When it comes to our composition attributes we’re going to be using the aperture to control not only exposure but then also the amount of flare and the shape of the flare.

What you will notice is when you’re using your aperture to shoot images with flare, a wide open aperture creates a blooming effect. Where basically the flare just spills and bleeds and it doesn’t really have a refined shape to it. When you start closing the aperture down the flare gets more circular and it becomes a smaller effect and a smaller effect over the image so not only if … That’s to say even with the same exposure so if you’re adjusting the ISO with each stop as you close down the aperture you will notice that flare starts to get smaller and starts to take a more defined shape in the image.

We need to balance to balance that out so we’re going to be using our aperture to control both exposure and to control flare. We’re going to leave our shutter speed at one two hundredth of a second because that is the highest we can get with our sync speed and because we’re shooting on a Sony A7R. We’re shooting all these images on a Sony A7R. We also had the 85mm 1.4 Zeiss lens, it’s an amazing lens that we had on loan from B&H. We’re testing that out and the lens has such a gigantic front opening that we had no ND filter that was going to fit that. We also didn’t have anything … The only thing, the only radio trigger that we had that would have worked on the Sony was just a standard Pocket Wizard.

We’re using Pocket Wizard which means that we don’t have full feature control there so we don’t have high speed sync and so forth. We don’t have a ND filter so need to keep our shutter speed at one two hundredth of a second, we need to use ISO 50 to control the exposure again and then use the aperture. We’re varying the aperture now to get to the right balance of flash to ambient light exposure to flare exposure. That is the balancing act here so synchronization is controlled. Again we’re at two hundredth of a second, at ISO 50 and we’re using our aperture to control everything else about this. Sync is okay, we’re on the PocketWizard and we’re fine there.

Ambient exposure so what we can see here is we have various test shot exposures, right? This is ambient light only we’re at the 85 prime, we’re at F5.6, ISO 50, 1/200, 5000 degrees Kelvin. I’m leaving the Kelvin more neutral on this because I wanted to have a very cool and neutral look to the overall shot. I think it looks really nice. Look at F56 you can how much the flare is blooming in, right? When you drop it to F4 not only does everything brighten up but the flare blooms to the point where her face is basically blown out. Part of the face is basically cut off and that’s not what we want.

It was actually very difficult to shoot this image on the Sony A7R and the reason why is because the EVF and the viewfinder on the back of the camera on the A7R when it displays the image you don’t see the image in full 16bit color detail. What ends up happening is that … I mean you might see it that way but it just does visually present it to you in a way that you can really interpret it not like on a Canon 5D Mark III or an Nikon D800 and so forth. It’s very difficult to tell just how much of the image was actually blown out versus how much was retained because in this image it looked like everything up to her body right here was blown out. In reality you can actually see part of her face.

In this image it look like her face is completely blown out but you actually see part of her face once we got the row into post. That’s just something to keep in mind. In those types of situations you really need to rely on your histogram to get you where you need to go because obviously the viewfinder has it’s limitations in that kind of a situation. That’s the F4, so we’re getting too much flare bloom at F4. At F11 we’re getting not enough, right? It’s strange where F11 we kind of have cut down the ambient light and so forth and by the way these two are just ambient light only. These two are combining flash now.

This, we have the Profoto VB22, it’s firing at around 1/2 to full power with two VB22s on the Profoto … Oh, no sorry. This is on the wrapper box Octo actually with the diffuser. We’re holding it very very close to her and so we actually have only one Bolt VB22, I misspoke on this on this one. It’s one Bolt VB22 at probably around full power so it’s roughly 250 watt seconds of power or 300 watt seconds the same as a Profoto B2 just directly over here. While we have a good exposure her in the shot, what we end up seeing is that the flare looks more like a mistake than something intentional. It’s not strong enough to look intentional but it still has this kind of wash over the image that doesn’t look necessarily good.

It doesn’t look like like it’s supposed to be there, it just looks like a mistake. At F11 we’re not getting enough flare so we back it off to F7.1 so now we allow the background to go a little bit brighter, we have this beautiful flare coming in. We can see just enough detail in her face. We’re firing now at roughly … This is probably one over one power in this kind of shot. Again it’s going to depend on the distance to the subject. The closer you are you might drop to one half, further you might be at one over one. Here we drop by about a stop because we’re bringing the aperture down by about a stop okay, maybe a little more. Now we get a nice bright exposure on her, we can see that flare coming in and we get a good balance overall.

This is kind of the ideal shot but it took us four, five attempts to get here because we had to just balance everything out. Now, what’s the difference between these two? Roughly the same amount of flare. This one has a little bit … The flare is slightly different in each of this but this one does not have any flash added whereas this one does. What we end up seeing here is that we’ve added essentially, we added light direction to the image because up here the image looks very flat. We’ve added that light direction to it and it lets her pop and stand out on the image. We get much more detail and definition in her, her dress, her necklace and everything and we have the flare on top of that.

Yes, this is a cool image if you were to shoot it with just ambient light but the problem is that it just doesn’t have that extra “umph” that extra kind of … I don’t know, that added feel to it as we would have with that additional light. All right so that how we have to get there. Now, for these you’re going to be essentially testing and analyzing every single shot. After every each shot you’re going to probably do like five, six test shots until you get to where you need to be. Once you are where you need to be then you’re going to basically get her into a right pose, get your subject in the right pose and shoot and just analyze the details from shot to shot.

We do have a little bit reflections right here from the necklace which you can see. We talked about that earlier, whenever you’re adding light and they have reflective items it’s going to create reflection so we could retouch that out if we wanted to. We left it in the shot though just … I don’t know why. Just because of, for the sake of leaving it. The one thing that we did do is we brightened the eyes just a tiny tiny bit just to make them stand out a little more in the image but otherwise you can see there’s very little change between these two.

Now, the key tips for this type of technique, remember what aperture does in controlling flares, it also controls you starburst effect remember that so with a flare or a starburst effect your aperture is going to control the shape of it. The smaller the aperture goes, the more of a strobist pattern you’re going to get with your light source, the more defined a flare is going to become, the smaller it goes. The wider your aperture, the more you open that aperture up the more that light source is going to bloom and create a wide shape of light in the scene that’s less defined overall. Use that in conjunction with that exposure setting to get the right balance. Once you get the right balance in the flare and in the background and in the ambient using the aperture then dialing the power setting that’s appropriate for the flash power that you need to get your subject to stand out to where you want him or her.