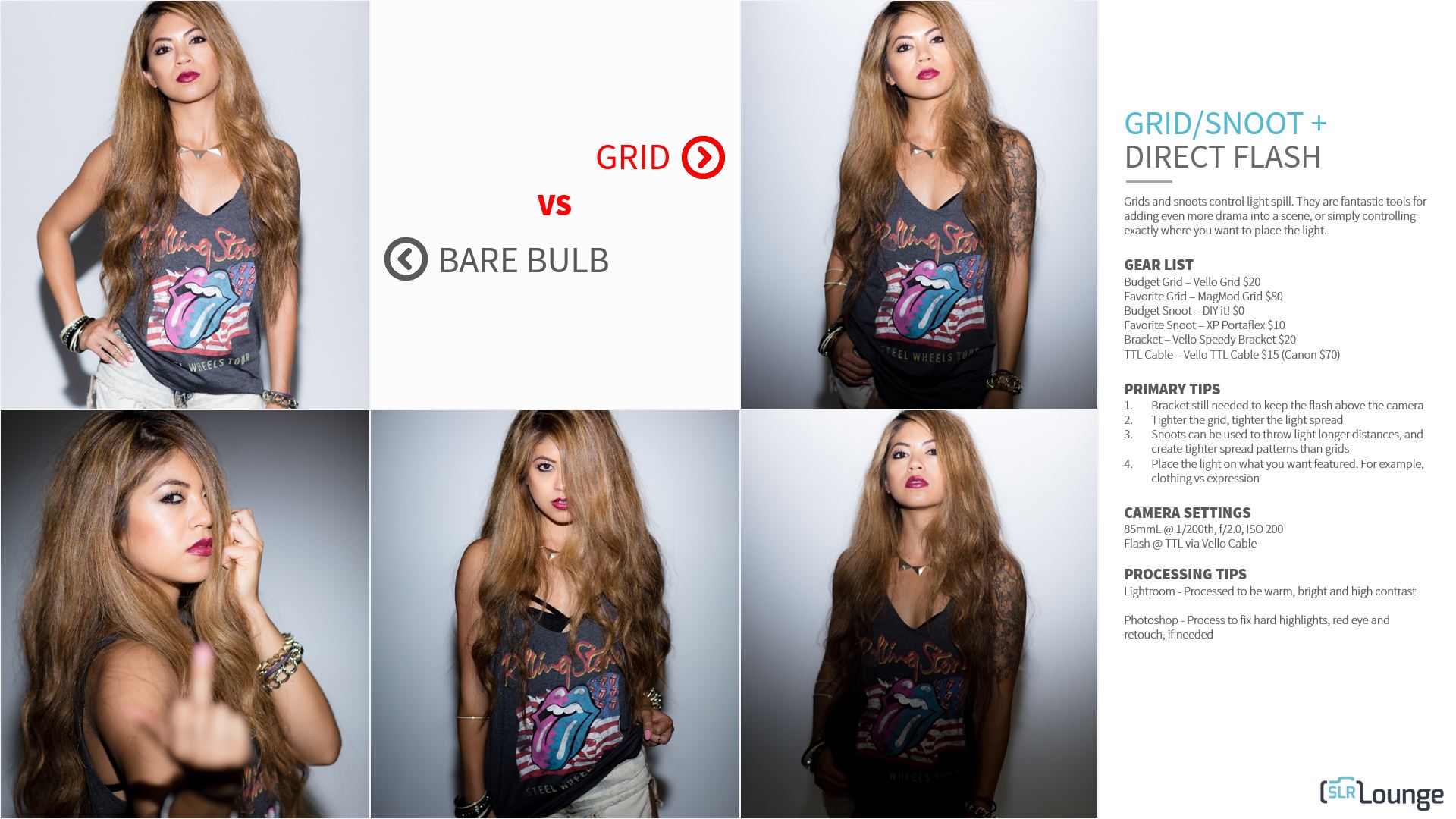 All right, let’s start to modify our direct flash and starting with a grid or a snoot. Either way, both of these are going to do very similar things. Now for this shot, because we’re not having to throw the flash long distances, we’re only working like say 10 to 15 feet away from our subject, a grid is totally fine. A snoot is going to do something very similar. Now what is this effect going to do. In the last video, I briefly mentioned that you can use your zoom to kind of control whether you want the light to go pin lit on the scene and kind of have a little bit of a vignette around the edges, versus whether you want to shoot a little bit wider and have kind of even edge to edge light inside the frame.

We shot even, edge to edge light inside the frame, but if I want that vignette look, another thing that I can do to take that zoom kind of a step further, if I’ve zoomed to 105 and still I want more of that kind of pin lit look, I want more of that vignette, more of that extreme kind of where the light’s hitting, where the shadows are, I would add a grid. For these particular shots, I think we were using the Vello grids, although if you’re using a Magmod, whatever you’ve got, you’re going to get virtually the same thing.

It works extremely well and it gives you everything all in one. You can see the difference between these two shots. Look at the bare bulb shot where we have edge to edge kind of even lighting. Look at the gridded shot, where we have a lot of drama and a lot of punch to it because we’ve left certain areas of the frame basically blacked out. We’re highlighting her face in this particular shot. Grids and snoots are going to control the light spill and this is important to remember, not only for on camera usage when we’re just doing direct flash or bounce flash because we can control where that light’s going with the bounce, it’s also important when you’re doing off camera flash, which we’re going to get to in lighting 201.

Let’s go ahead and show you our actual gear list and camera setup. Remember, in all these different gear lists, we give you several different items, budget versions, favorite versions and so forth. You don’t need the entire list, watch the video and see exactly what we’re using and decide from there. Don’t go and just buy everything because you’ll have duplicates of a lot of stuff. We’re just trying to give you different options. For these, I think we used the Vello and all we would do is, with the bracket still attached, I’m just going to apply this grid right over the flash.

This is how it would be applied. I just have the Velcro along the sides of this and this is the camera setup for these shots. Remember, I still want to keep the flash coming from above the camera so I still want to use the bracket. Bracket still needs to be in place, that’s tip number one. Tip number two, tighter the grid, we already talked about that, the tighter the spread of light. Tip number three is, if you do need to go throw it long distances or you want to have more pinned accuracy, you can use a snoot but we didn’t bother because we didn’t really need to in this shot.

Number four is, we can place the light exactly on what we want to feature for each shot. What I would be doing is basically as I’m shooting with my portrait aspect ratio, I kind of just have one hand up at the top and all I’m doing is I’m adjusting where my light is kind of hitting in each shot. Okay, so you can kind of adjust and play around and you get different effects with each one. Let me just show you our camera settings and what kind of effects that we’re talking about. In this top shot, basically I have pinned her head all the way through to her shirt.

We have kind of a feature on her face, on her expression and we also get her shirt. On some of the other shots, I’ve pinned certain things differently, particularly if you look at the one right below it. I threw the light up even higher. Now what this does is, it brings focus to strictly her expression. We get just kind of this, for a celebrity head shot, this would be absolutely perfect because that’s all we really care about. The clothing and everything else plays a really kind of backside role to her and her face and her expression.

It has an absolutely fantastic look for that and I love that look. This is, again, kind of more towards the, I think this is more towards the clothing actually, with a little bit of the face in the vignette. Again, this is more appropriate for say a fashion catalog or a fashion type look book, where you want to bring more attention to the clothes vs the model wearing the clothes. Depending on what we pin, we can adjust and draw the viewer’s attention in to the most important area of that image. I like this look so much, I thought I had a really edgy vibe, so I had her look in the camera and give me a kind of stare and flip the camera off a little bit.

We have this kind of foreground shot with her finger in the front and then her look in the back. I thought it looked really cool too. Again, we can see all the vignetting effects toward the back, we can see it around the edges, depending on what we pin and it has a fantastic look. For the camera settings for all these, it remained virtually the same. We’re still on our 85mm, we’re 1/200th of a second, we’re at F2, ISO 200 and we’re using that flash cable, so I’m shooting TTL via that Vello ETTL cable.

Again, with these types of shots, direct flash because I’m moving in and out so much with this type of a shot there’s not really a point to using manual because my TTL is going to do a perfect job of getting the exposure because it’s a very simple type of shot. There’s nothing crazy about the composition. There’s nothing crazy about the types of modifiers that we’re using, so the camera can give me consistent results with TTL. If it can give you consistency, then by all means use it. If you want to use manual and practice, by all means use that too but for these particular shots, we just left it in TTL.

The processing again is very simple, very light, once again, we’re just brightening it up. We’re making it be a little bit on the warm side. We’re leaving the highlights and the contrasts and so forth inside a layer. You do the same thing if you didn’t want to take it to the photo shop, you might fix some of the harder edges, like if your model is getting a little bit sweaty or if there’s a little bit of oil on her skin, it will appear, because this is a very specular light remember. Those are the things you might want to retouch. Any skin retouches and so forth, you would do in photo shop.

This just has a little bit of tiny basic layering processing. That’s it for this video. Hopefully you kind of dig the results and the differences between just a bare bulb vs a gridded bare bulb and how much dramatic this can get your images with the same direct flash, just with a tiny bit of modification.