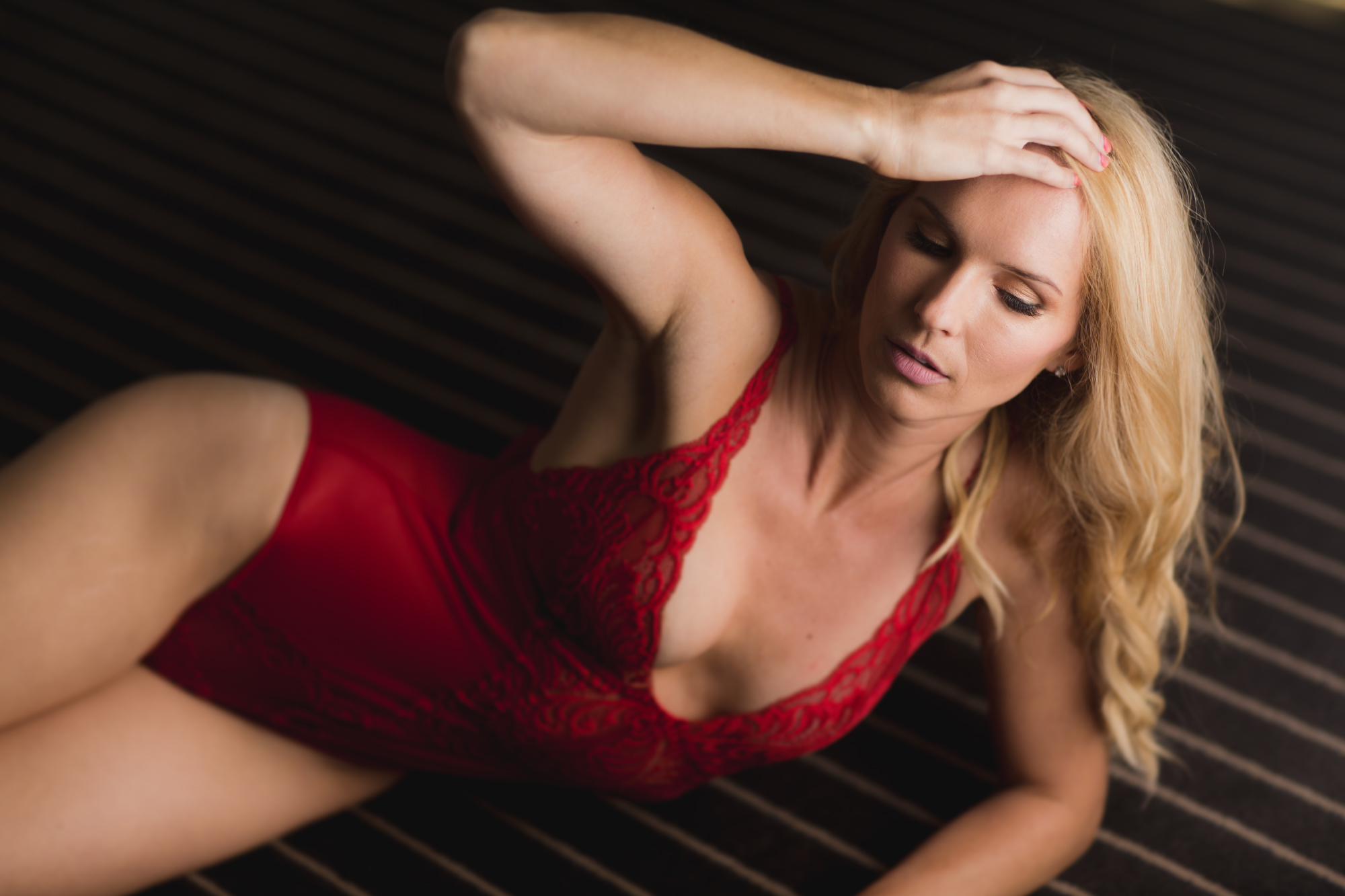 Part two of Great Light Changes Everything. Once again we have our lovely model. We’re shooting in the hotel room and I told my model, this was right after the mirror shot. I’m like, “You know, why don’t you lay on the ground right here.” She has complete trust in me. She’s seen all lot of the images from our shoot. She loves them. She thinks I’m amazing. This is when I’ll ask my couple, my models to do things that seem kind of strange. I don’t just come out of the gate. I’m not in a couple session.

I don’t just come out the gate going, “Do this. I’m going to make this crazy image.” I always warm up into these images where they might be wondering, “What is he doing right now?” If I come out of the gate starting with that, then … I don’t know. It’s kind of difficult to get them into those poses and get them comfortable, and get them relaxed and so forth. By half way through the shoot, when they see me creating amazing images.

Then I can start to ask them to do more difficult thing. I can start to ask them to do thing that they might think are a little bit weird. Then they see the results and they look fantastic. We’ve built that trust and that’s what I’m trying to say. I said, “Do you trust me?” She said, “Yes.” I said, “Lay down on the carpet. We’re going to use this carpet as a background.” She’s like, “Okay.” Once again, this comes down to visualizing.

We have bad skin tone. We have no color in the eyes. No shape in the body. We have this red that doesn’t look like red. It looks like reddish green. Everything about the image does not work with that ambien light. If you can visualize what it’s going to look like with better light, then you’re going to miss over a scene that could be something great. Something as simple as having someone lie down on the carpet could be great. What I like about this scene though was that we had these line.

I though it would be cool to have these leading lines leading into our subject. Just as a nice simple background, drawing attention into her. Her shape, her form. I had he lat down on this. Then what we started doing is figuring out what I want for composition attributes. I already know my composition based on my leading lines, but what about the camera settings and attributes?

I want a very soft look in this overhaul image. I want soft, I want background separation. I don’t need to see lint and detail on the carpet. What? Why would I need to see that kind of stuff? I’m shooting at F2, by the way if you realized every single one of my courses gets crazy silly when we get to the last chapter. I don’t know why that is. If you like this version if me, just tell me.

I’ll make this version of me our version though the entire workshop. It’s really up to you. We’re shooting this image and I want to go to around F2 so we have good background separating. We have these lines in the background which are visible, but we’re not seeing detail on the carpet. We don’t really know that it’s a carpet aside from she’s just laying down on something. With sync, we’re indoors.

We’re indoors crazy people, we don’t need to worry about sync. We can definitely cut down our light without having to worry about HSS or MD filters. For the ambien light exposure though, check this out. What do we do? We cut from over here where we’re at F2, 1/100 and ISO 1600, so we went from 1600 to 200. That totals 5-stops. That’s 5-stops of total ambient light cut. Total ambient light loss that’s we’re cutting out of our scene. Now we’ve reduced and we’ve removed all that muddiness and now we replace that with our own light.

With our pretty light. What do I do? I pop a Phottix Mitros into our Westcott Apollo Strip. I pop the grid on there because I want to control where that lights going. I pop a diffuser on there because I want it to be soft. I place that right next to our models face. I’m firing from right to left. Then we take a shot and it’s still looks like poop as you can see right here. We’re at 1 1/4 to 1 1/2 power.

I think on this shot we’re at around 1 1/2 power. Why does it still look like poop? Because we haven’t gotten the right light quality. Again, back to your image isn’t looking the way that you want it to. Go back to ambient verses flash balance. Now we’ve gotten our ambient verses flash balance over here to some extent. We still have a little bit too much ambien light which we are going to cut away.

That’s our test shot. We’re going to cut it away when we get to the 1/200 of a second, but the other issue here is the light quality. The light quality right now is not matching the look that I want it to have. It’s still too hard. It’s still to secular. It’s not giving me what I need for this particular scene. Even though hard light and secular light is great for other types of shots.

For this one, that’s not what I want. We back the Westcott Apollo strip and Phottix inside of it off just a little bit. We bust out the Westcott 5-in-1. Our scrim on the inside. Once again we open up. Remember the key word. You open up the light source to be even larger than what it was. We’ve opened up the flash once with a soft box. We have gone additional step by defusing that and reovign some of the specularity.

It also opens it up a little bit more. Now we’re adding another layer of diffusion on to that to open it up even further. Now it becomes a larger light. The scrim is held right next her. The flash is behind that. We’re allowing the flash to open up as it hits the scrim, and then we get this beautiful soft light that lads right on her. What lighting pastern is that? I’m waiting. I don’t hear anything.

If you said or thought Rembrandt then you got it your lighting 101 light patterns down packed. Yes, that is Rembrandt. We just have that little bit of light spilling onto the opposite cheek, highlighting the eye a little bit. It’s very close to getting loop because basically for full Rembrandt, we need to create a shadow here. It’s close enough. It’s closer to Rembrandt than I would say to loop lighting.

We go for that light pattern and we can control again the pattern on her face by simply just moving her chin back and fourth. Moving it a little bit further, we get Rembrandt. Moving it further back the other way we get Loop lighting. Look at how beautiful and soft that is. Wit our test shot we still noted that in the test shot there was too much ambient light still at 1/50 of a second, so we cut that down.

By going to 1/200 of a second so the total 5-second removal of ambient light really allowed our own light to take it’s place and become the main light in the scene and I becomes beautiful. It becomes gorgeous. It becomes this clean toned image with just great features over her skin. We can see everything like that form in everything. It looks fantastic.

For this pose, I had her just kick the hip up a little bit so we get a nice little exaggeration of the hip right here. It drops down. It comes back up. What we’re trying to do I always maintain that hourglass figure in our female models regardless of whether they’re standing or whether they’re sitting. You know if we go back. Let me go back to that lat image. Look. Do you guys e still recognize this?

At leas in every situation or what we want our women to look feminine. If you want to make a women look masculine, you pose them in a masculine pose that eliminated curves. That would be basically doing flat footed things. Not swinging the hips. Not moving and doing these kind of things. For the second shot … For this shot I just have her relax and lean onto that one side with her hand right here.

Using shapes to make your images interesting right? We have her bring her hand up to her head which kind of brings our attention into the face. Then we don’t see the eyes so we’re able to glance around the image and taking her form and everything else. They eyes aren’t drawing us in. I like to sometimes close the eyes and allow the viewer to focus more on the body and the form and everything else in the image.

Rather that being drawn to the face. Then you have those shots where the eyes are open and you allow the eyes just to pull the viewer in and just look. She has an amazing expression and beautiful eyes that just suck you right in. You can tell I like these types of shoots. I love boudoir. I love fashion. I love fitness. I love bikini. All these types of shoots are so awesome, because what other type of photography allows you to focus on pose and form and lighting in the pure way that these types of shots allow you to do that.

With every other type of shot when I’m doing wedding photos I generally have a couple or a group of people that I’m using to conceal. I’m using clothing and everything else is helping me out to cloth and conceal and to do everything that I can’t do as far as the pose goes. When you cut it back to just a single subject, and you cut that clothing back to something that’s either tight form fitting.

Maybe they’re going implied nude or maybe it’s a fitness shot where they don’t have a shirt on and so fourth. For the guys. The girls would still have their shirts on of course. That would be a weird fitness photo shoot. That wouldn’t really be fitness. With those types of shoots, we are left with just the body. The form. The pose and the way that we add and subtract light to it. It’s such a great practicing tool for photographers.

This is why great artist … All the great artists of the past. The classic artists, they always painted the body because painting and shaping light. Shaping the body on canvas help them to understand posing and form and all those kind of things. I’d highly recommend taking this type of stuff on. It’s an absolutely fantastic tool to really refine your lighting and posing skills.

Hopefully this helps y’all out in seeing how we’re going to change visualize this scene and add great light. How that great light simply turns a scene that is a walk away scene. Something that we would just ignore into something that is actually pretty incredible.