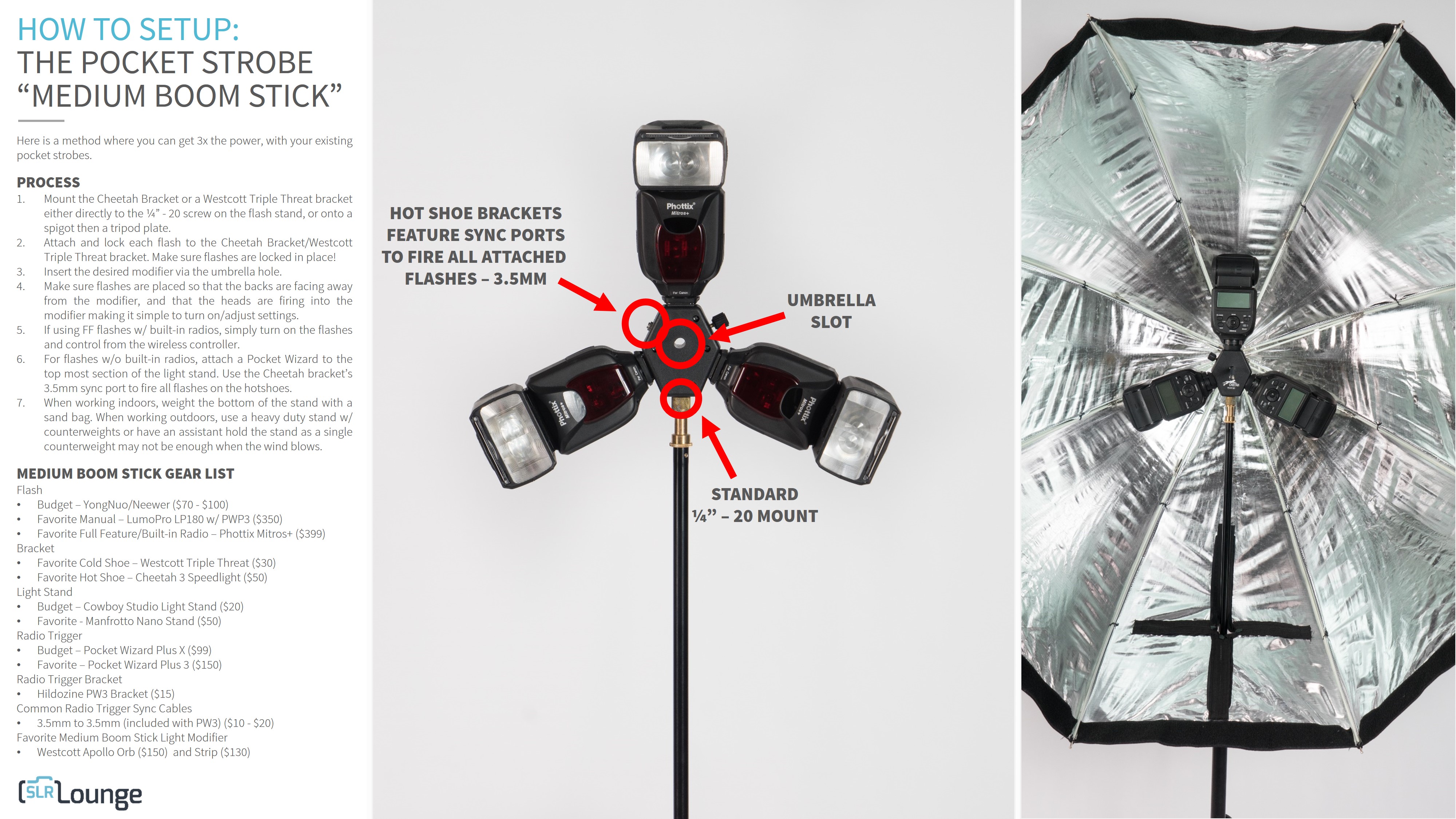 The beautiful thing about this, is we can mount this to virtually anything. Let’s say that we don’t have a light stand with us. Let’s say that we forgot it, but we do have our tripod. The tripod, again, it comes standard with that 1/4-20 mount for the bottom of your camera, and that’s the same mount for this guy. All I have to do is just screw this guy right onto the tripod plate, and now we’re basically good to go.

Also, if I wanted to just put it onto a light stand, I could grab my little spigot here, all I need is a 3/8 inch 2 1/4-20 adapter, which is this guy, put that right here, onto there, and now I can mount it directly to my light stand.

Let’s go ahead, Logan, do you want to take this guy out of the frame just so we don’t need this anymore. Thanks buddy. Look at that, it just kind of like, prepped out of the frame on it’s own two legs. That was a little creepy. But that’s all due to Logan. Logan’s awesome. And Joe’s awesome. My team’s awesome.

Now that this is on our light stand, let’s go ahead and just pop the flashes on. I’m going to show you, in just a moment, of course, this bracket right here, this Cheetah, is best when used with manual strobes, but right now we’re using full featured strobes. If you’re using full featured strobes, all you need is the Westcott Triple Threat, which is thirty bucks instead of fifty or sixty bucks for this guy. It’s still going to allow me to demonstrate this, and I want to use it for that demonstration.

I’m going to grab my other Mitros so this is four Mitros’s and you can see how this is already getting kind of expensive, right? Because we’re using four pocket strobes. These are each four hundred bucks a pop, so if we need this much power, we might be just better off going with, say, larger strobe. Going with a medium strobe or even a full strobe. The benefit of this, of course, there is a lot of portability to this, because we can have this inside of a carry-on bag and we can set up on location. It’s very simple and easy to do. With these directed forward you can see that I now have three flashes all set up together.

Before I go ahead and put the actual Westcott Apollo strip box on here, let me show you how I would operate this. I’m going to flip these around so you guys can see the backs of these. I’m going to turn all of them on. I have my Odin right here. Generally when I’m firing everything from a single light source, I’ll place all these on the same channel and group. I’m going to put them all on channel one and on group A. Let’s place this guy … I keep pressing the wrong button, there we go. Group A. Let’s go to this guy, same thing, group A. Perfect, everything is channel 1 and group A.

On here I can control channel 1 and group A directly from that top line and so I’m going to power everything in channel 1 and group A up to 1/8 power. Perfect. Now I’m going to place this back towards you guys and you all can see that as I start shooting all three of these are firing each and every time. That gives me three times the power in a single light source. All I have to do at this point, is if I want to modify that light we can place the modifier over this so that we have modification.

Let’s go ahead and do that, but we’re going to do that in just one moment, because I do want to demonstrate the syncing capabilities of our little Cheetah thing before we continue. Let me just pop in a pog wizard. I’m going to plug it right in to the port. There’s a port right there on this side, and I don’t need to set up a PocketWizard on my camera, I just want to demonstrate this one feature. Now with this plugged in, I can basically trigger all three of these flashes. Here’s the thing, if I click test right now, you’ll find that none of them are actually working. The reason is the way that these flashes work, these are full feature flashes and I have them set all as Odin receivers. Remember the radio mode that we talked about earlier? They’re not prepped to receive any sort of signal, so what I need to do on each of them is I need to go back and basically turn them to operational slaves, so basically we’re just going to flip these to the radio mode where it would actually allow something else to trigger these guys.

Now generally this isn’t necessary, say on a … If you’re on a manual flash, this isn’t a step you have to do, but here’s the thing, is that I don’t want to take all three of these off and put manual strobes on there. It would just take too much extra time, so we’re going to assume that we’re using manual strobes all around, and now with a single … And now with a single PocketWizard I can trigger all three of these flashes at the same time. That’s how that works. They’re all set to one-to-one right now, so they’re recycle times are very slow, so if I do it again … There we go, loverly. That’s how we would trigger three manual strobes that are all placed on a hot shoe bracket via a PocketWizard, that way we don’t need three pog wizards to do so.

Let’s go ahead and unplug that. I’m going to go ahead and put my Odin … I don’t know why I took this guy off, I thought I was going to set it up for you all, but … Go ahead and place this back on the camera. I’m going to set this guy down here, and we’re going to go ahead and flip … By the way, to flip the radio modes on this guy, all I’m doing is I’m pressing this button right here, it’s the M-S button, Master Slave button, you hold it down and then it gives you the different radio modes, so I want it to be in Odin receiver mode. All these are going to be receivers for whatever Odin trigger I’m using. I’m going to place Odin receiver, same thing here, go back to Odin receiver. We can double check just to make sure that all three of these are still working by grabbing our Odin trigger. We’re all good.

Now at this point, this is where we would say, let’s place the modifier on here. Generally, before I place on the modifiers, I try to get everything on the same channel, the same grouping and everything to get it all setup, because I don’t want to fiddle around with radio settings once this is set. What we’re going to do now is we’re going to open up … This is the Westcott Apollos Strip, I’m demonstrating with this guy because he’s smaller than the Apollo orb and so it’s a little bit easier for me to navigate this on our set.

We’re going to open this up, at the bottom you see this zipper, so we’re going to go ahead and open up the zipper … Just bring this down a little bit actually, there we go. Now we’re going to place this entire thing over our flashes. Here’s what we’ve got to do. Notice how the flashers are pointing towards you guys. What I want to do is I want to have the backs of the flashes facing outside, okay? The reason why is because if I need to make any adjustments it’s easier to do that from this side. I’m going to turn these all so that they’re facing into that soft box, then we’re going to place this item right through the umbrella port right there. We’re going to open up the umbrella portal a little bit and then bring that rod through and tighten it up. Now we’ve got that placed.

Once this is placed, this is when we come down and zip up the bottom piece right there, because this is what prevents light spill from leaking out, from losing too much light. Now we’re basically all set. Now we’ve turned our three flashes here, our medium boom stick, into a modified light. Now when I fire, you can see all three of them are firing into the back of that and then they’re coming out.

The other wonderful thing obviously, it’s very easy to connect the diffusion panel to this. I do want to show you all real quick the grid panel. This is the Westcott Apollo Strip Grid. I’m going to go ahead and set this up real quick so you guys can see it. Even though I’m kind of stepping out of frame, it is okay. All this does is it just Velcro’s around the outside of our strip box. I would generally diffuse this as well so it’s diffused and gridded, so that way I can really control where the light is going. We’re going to attach that to the top, go to the right side, attach the bottom to the right side, then go through the middle, you can do the bottom. I’m not going to do a very thorough job of this right now. We’re just going to do it kind of haphazardly. Just so you guys get the basic gist of this.

Very quickly, very easy, I now have a strip softbox, or a gridded strip soft box. Again, the beautiful part about this is just how small this all packs up to be when you need it to take it on location. When you need to take this anywhere it folds up to the size of an umbrella. You get everything, including the light stand, the flashes, all inside a one, small little bag. You take this on location, you have a full soft box with grid, with diffusion, with everything you could possibly need.

Inside of it, we have a total of around 160, roughly 15-160 watt/seconds worth of power, or roughly 180 guide number. We have three of these strobes which is a decent amount of power. Three of these strobes is basically enough to balance daylight. You can shoot with three of these modified strobes at full power, you will be able to see that light when modified over your subject. The only thing is that you need to place your modifier close to the subject still, because it’s not that much power. Three modified strobes will actually be visible in daylight. Again, for the price, you’re talking about quite an expensive set up for these items, but here, check this out.

This is the beauty in having a full feature system when you’re set up like this, now I don’t have to have an assistant reach through the side and try to make adjustments to the power and the zoom, I can do all of that directly from my remote right here. If I want to power all of these up to full power I can do that, now when I fire I have full power recycles, of course it’s not going to recycle now because everything’s firing at full power. You can hear them all each recycling.

Gear Setup – Setting Up a Monopod Light or “Boom Stick”